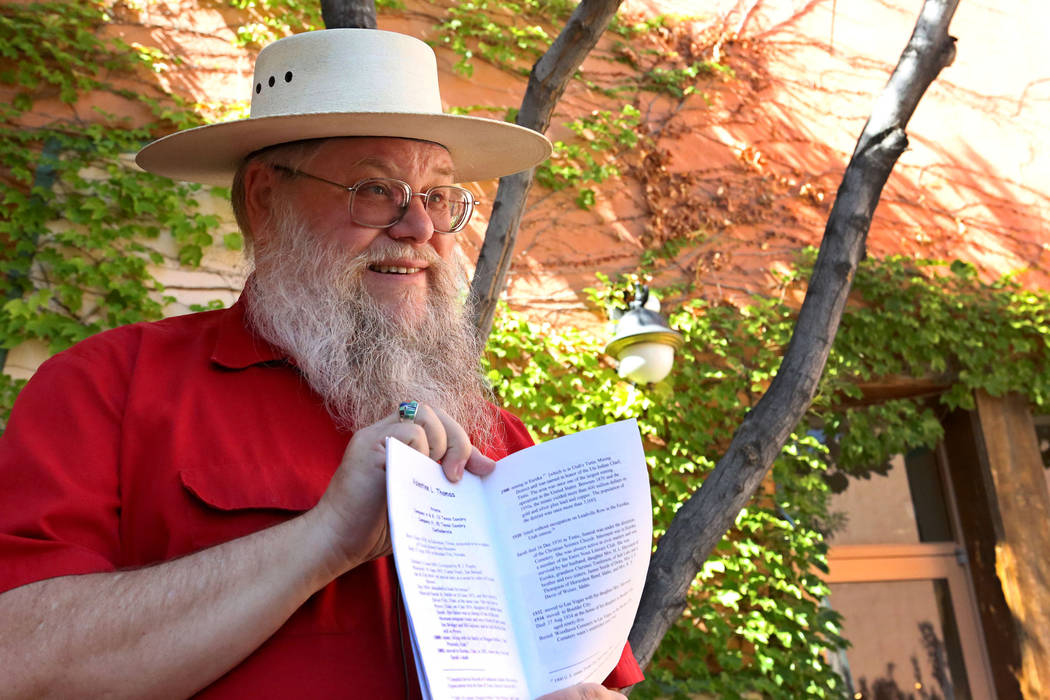 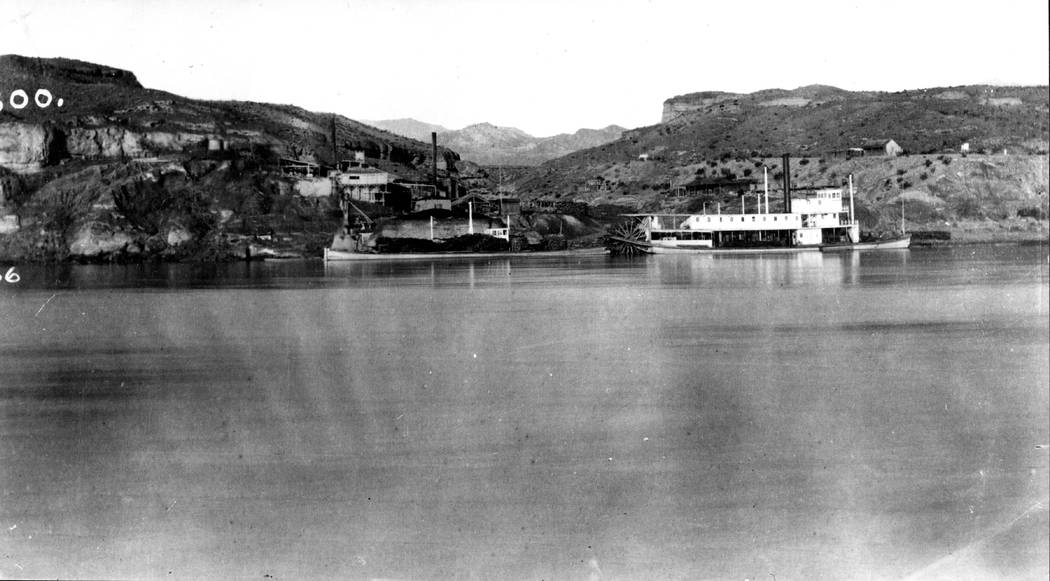 A Colorado River steamboat is docked at the mouth of Eldorado Canyon, southeast of present-day Las Vegas, in this undated photo from the National Archives likely taken in the late 1800s. (UNLV Special Collections) 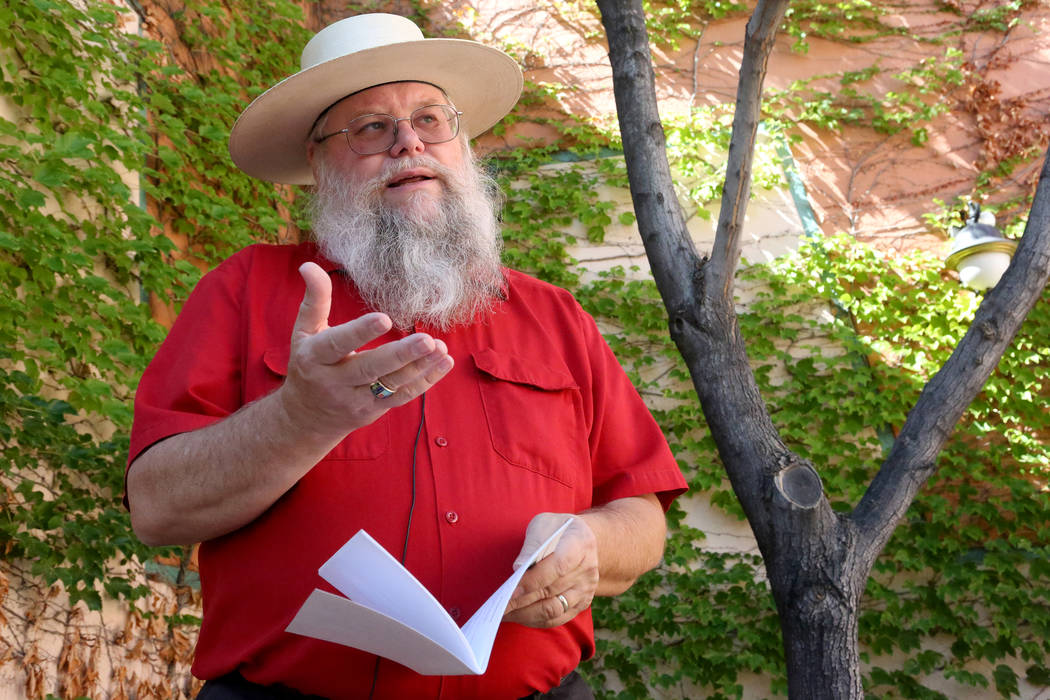 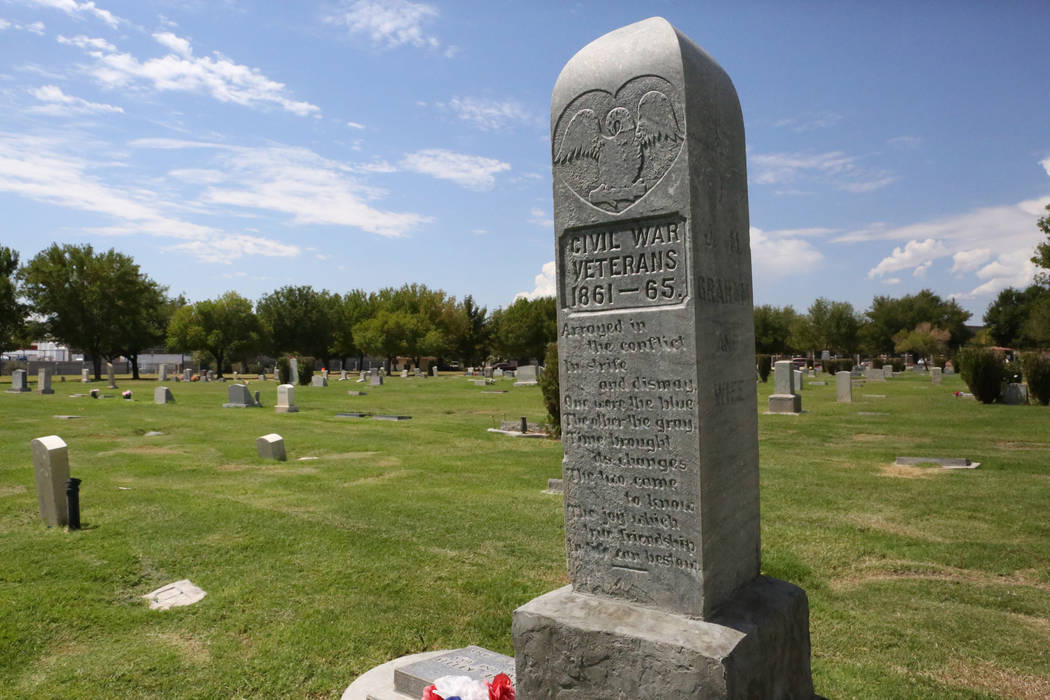 A granite pillar marks the grave site of two Civil War veterans, one blue the other gray, at the Woodlawn Cemetery in Las Vegas on Tuesday, Aug. 29, 2017. (Michael Quine/Las Vegas Review-Journal) @Vegas88s 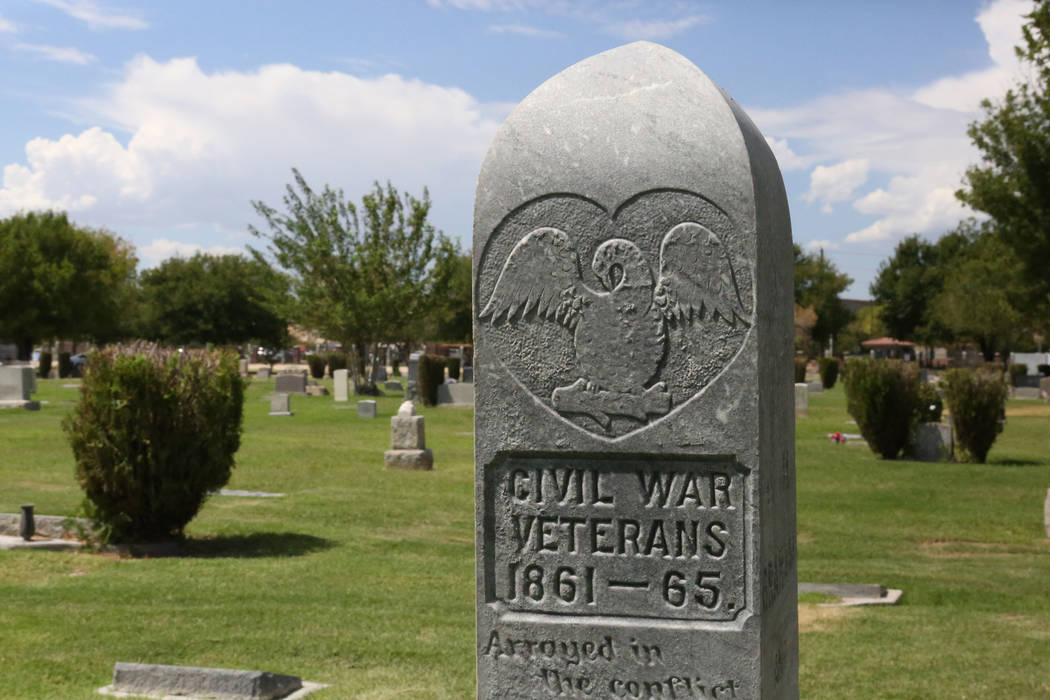 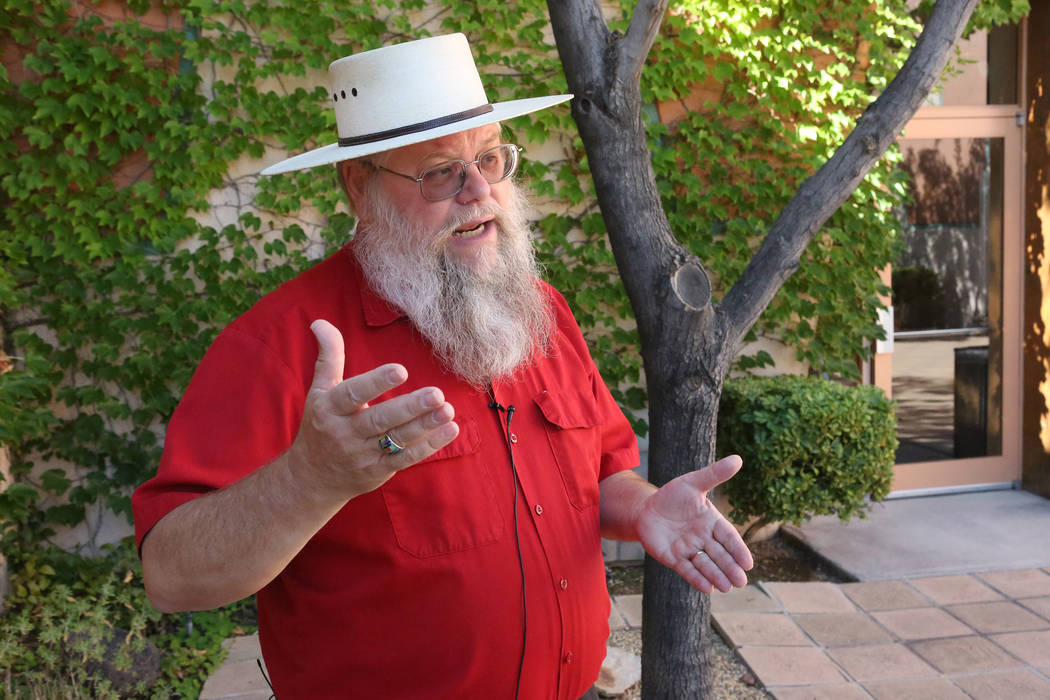 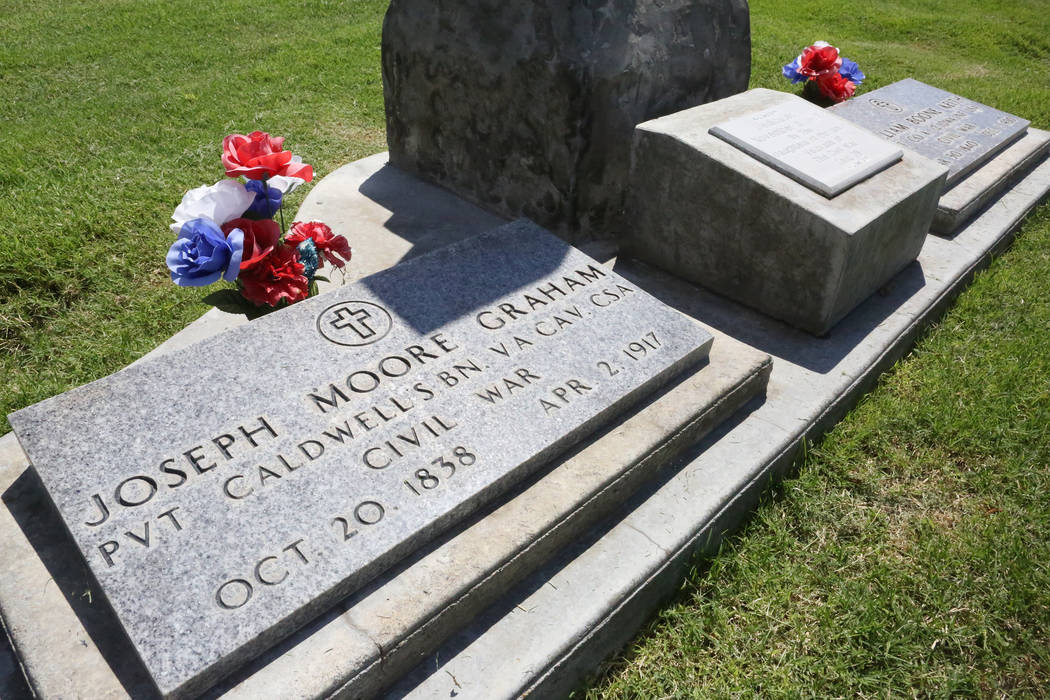 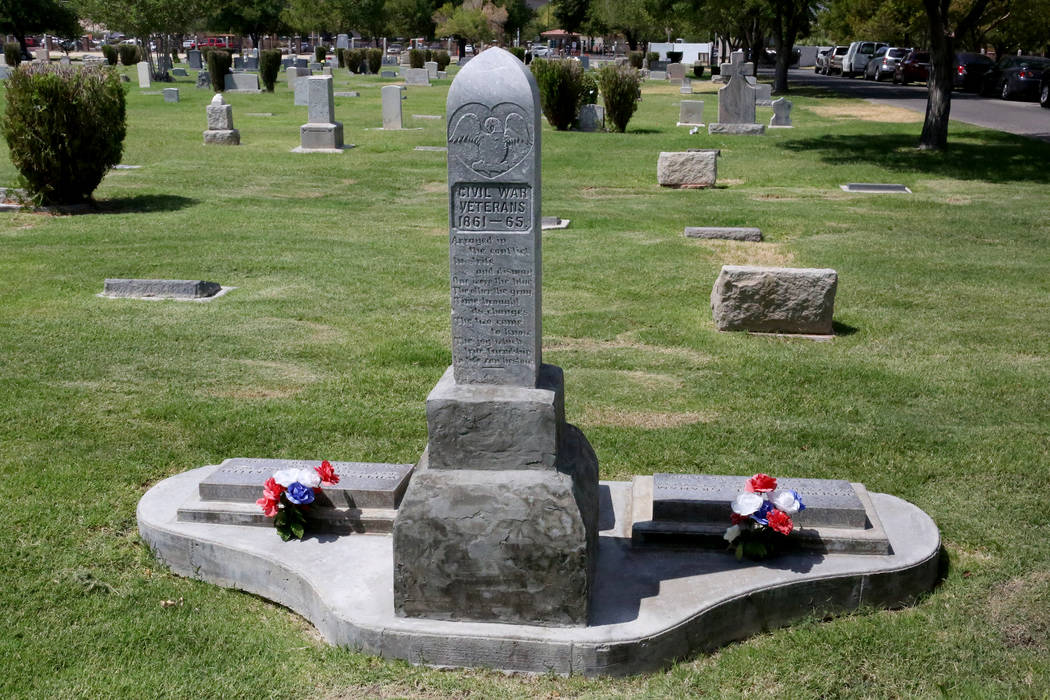 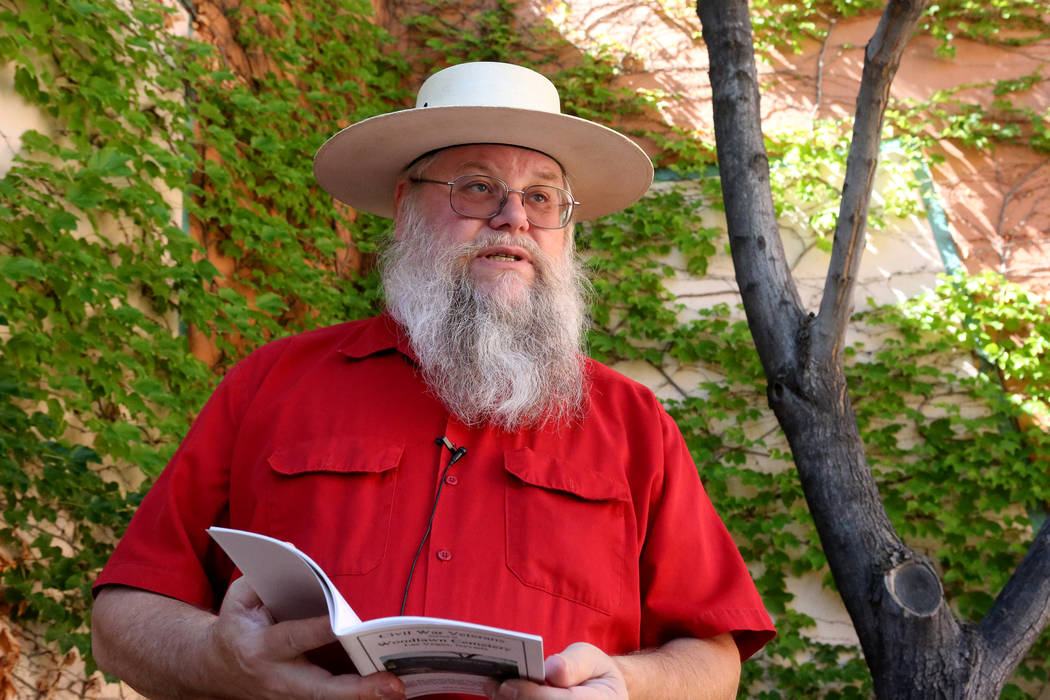 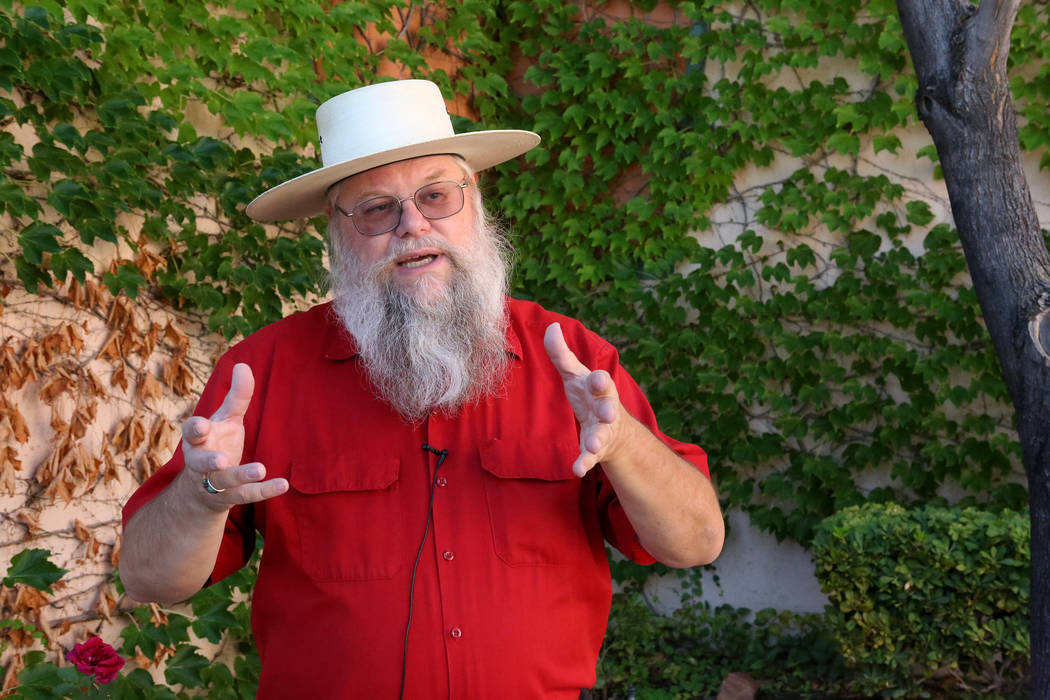 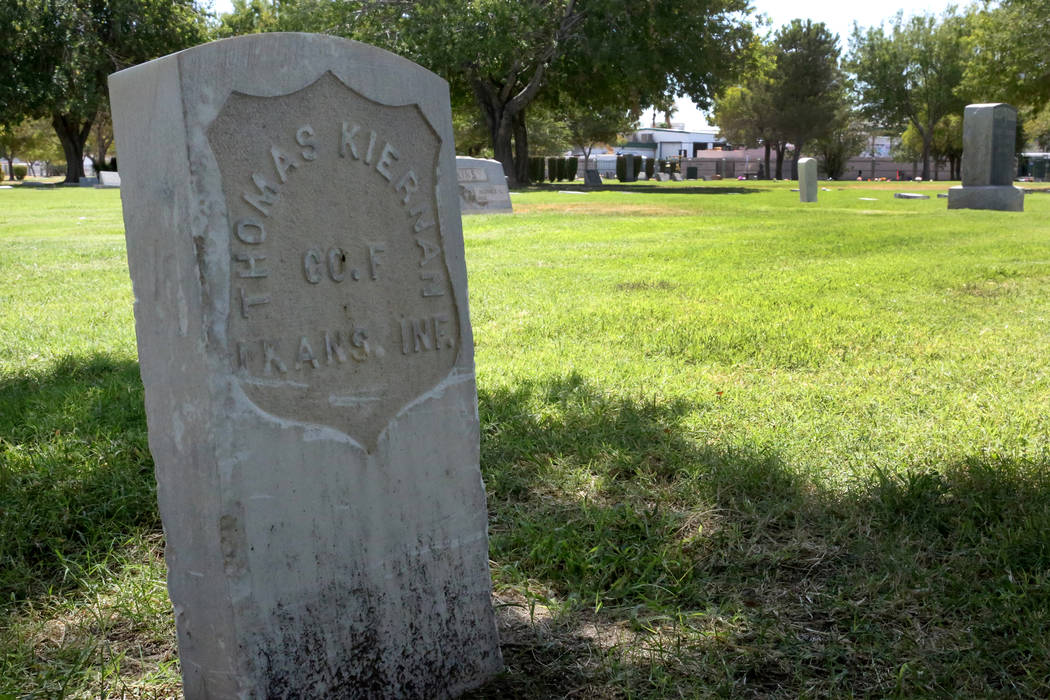 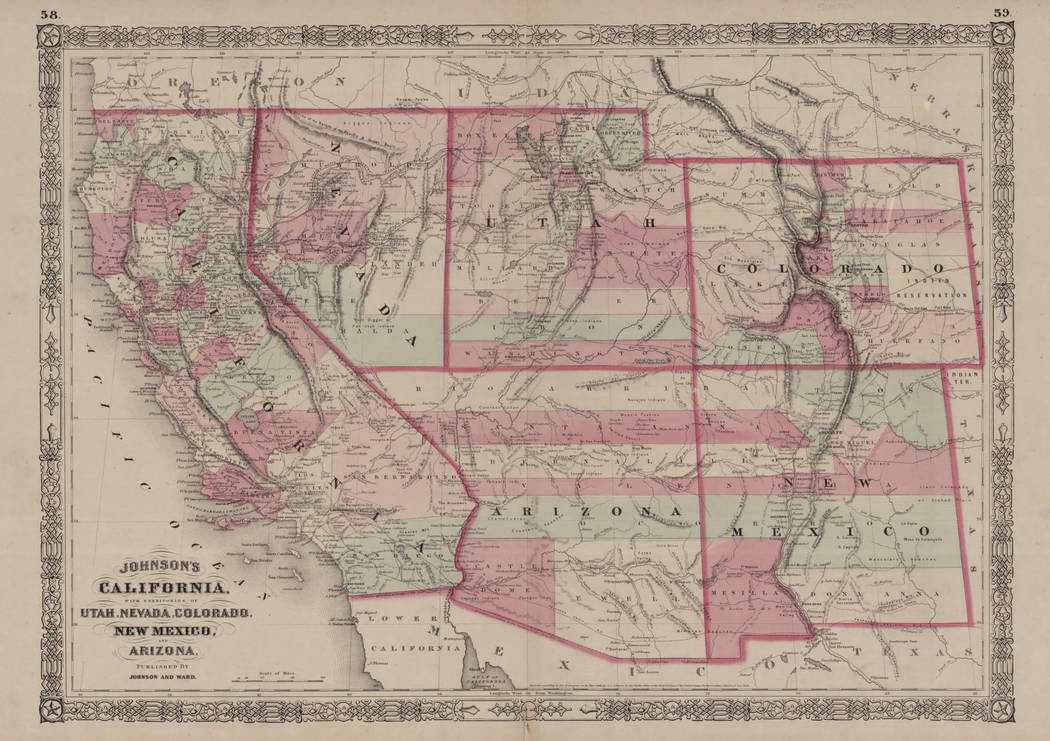 A map from 1864 shows the state of California and territories of Nevada, Arizona, Colorado, New Mexico and Utah. (UNLV Special Collections)

“Battle-Born” Nevada famously won statehood in 1864 to help preserve the Union, but it was the Confederacy that initially claimed the land now known as Clark County.

Just don’t expect to find any monuments commemorating Southern Nevada’s brief annexation by the South. None were ever built, so there’s nothing to tear down.

“They may have claimed this territory, but they certainly didn’t maintain any control over it,” said Mark Hall-Patton, historian and museums administrator for Clark County. “There was never any Confederate presence here.”

When Nevada became a U.S. territory in 1861 and a state three years later, its southern boundary was the 37th parallel, an east-west line running about 10 miles north of present-day Beatty and Mesquite. What is now the southern tip of the Silver State remained part of the New Mexico Territory until 1863, when it became part the newly formed Arizona Territory.

Early in the Civil War, the Confederacy laid claim to Arizona but never sent troops to the harsh, largely unsettled desert west of the Colorado River, Hall-Patton said.

While controversy swirls around Civil War legacies and monuments in other states, Southern Nevada’s brief affiliation with the Confederate States of America is more a quirk of history that left no mark on its psyche.

“It wasn’t a Confederate territory,” Hall-Patton said. “It was not like the Confederates had this outpost in the West.”

It’s unlikely the few people that lived in the area at the time even knew about the secessionists’ claim. Hall-Patton said only a few hundred settlers lived in the future Clark County. Some were army deserters who chose to hide out from the war in the gold mines of Eldorado Canyon, about 50 miles southeast of present-day Las Vegas.

But Hall-Patton said the miners soon formed separate camps based on their sympathies: “Buster Falls” for those backing the Union, and “Lucky Jim,” about a mile down the canyon, for those who favored the Confederacy.

Occasionally, fights would break out between the two camps. “They didn’t get along with each other,” the historian said. “They weren’t willing to fight for their sides in the war, but they would fight with each other.”

One infamous resident of Buster Falls, a miner and hired gun named Bill Piette, liked to shoot holes in the Confederate flag that flew over Lucky Jim, but none of quarrels between the camps ever resulted in significant bloodshed, Hall-Patton said.

After the Civil War ended, the two camps were abandoned, though Eldorado lived on for a time as Nevada’s busiest Colorado River steamboat port.

Confusion over who owned the southern tip of Nevada would live on as well.

Congress transferred the triangle of desert to Nevada on May 5, 1866, and the state Legislature accepted the additional land Jan. 18, 1867. But for years afterward, residents, tax collectors, postmasters and even the U.S. Army treated the area as if it were still a part of the Arizona Territory.

The confusion was especially pronounced in the isolation of Eldorado Canyon, where the fastest route to Nevada’s new state capital was down the Colorado, through the Gulf of California and up the Pacific Coast to San Francisco by boat then overland to Carson City.

“People had no idea where they were. They were out in the middle of nowhere, in a miserable place with no wood and no water,” Hall-Patton said. “At this point, it was about as far as you could get from anywhere.”

The birth of Las Vegas

Officials in Arizona objected to having a portion of their territory taken away, but they found few allies in Congress after “leaning Southern” during the Civil War, Hall-Patton said. Though it was never the stated reason for the land grant to Nevada, he said, the federal government’s gift seemed to carry with it a none-too-subtle message to those in Arizona who sided with Confederacy.

The price of that betrayal was roughly 12,000 square miles, and Nevada has done a lot with that extra land over the past 150 years.

The boundary adjustment gave the state direct access to the Colorado River, which now supplies 90 percent of the drinking water for the Las Vegas Valley’s 2 million residents and 40 million annual visitors.

It also guaranteed Nevada a huge piece of the Hoover Dam project and the bulk of the construction jobs it spawned during the Great Depression.

Had this land remained part of Arizona, you can forget about legal gambling, quickie marriage and divorce and many of the other things that helped Las Vegas grow into the Entertainment Capital of the World, Hall-Patton said.

“We wouldn’t be the Clark County we are today,” he said. “We’d be more like Kingman.”