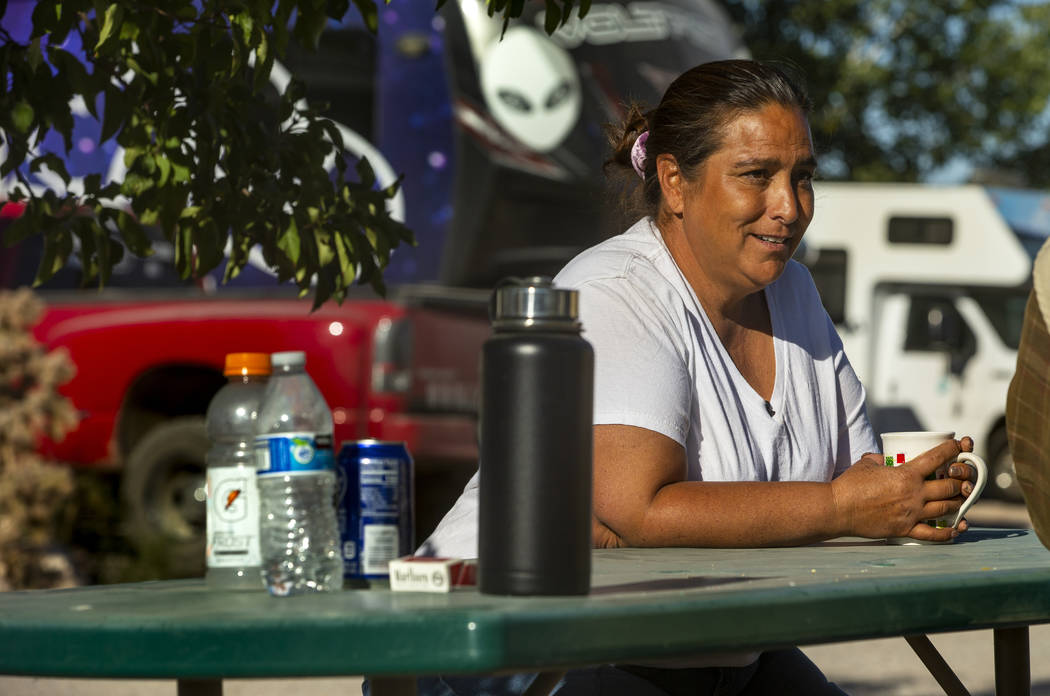 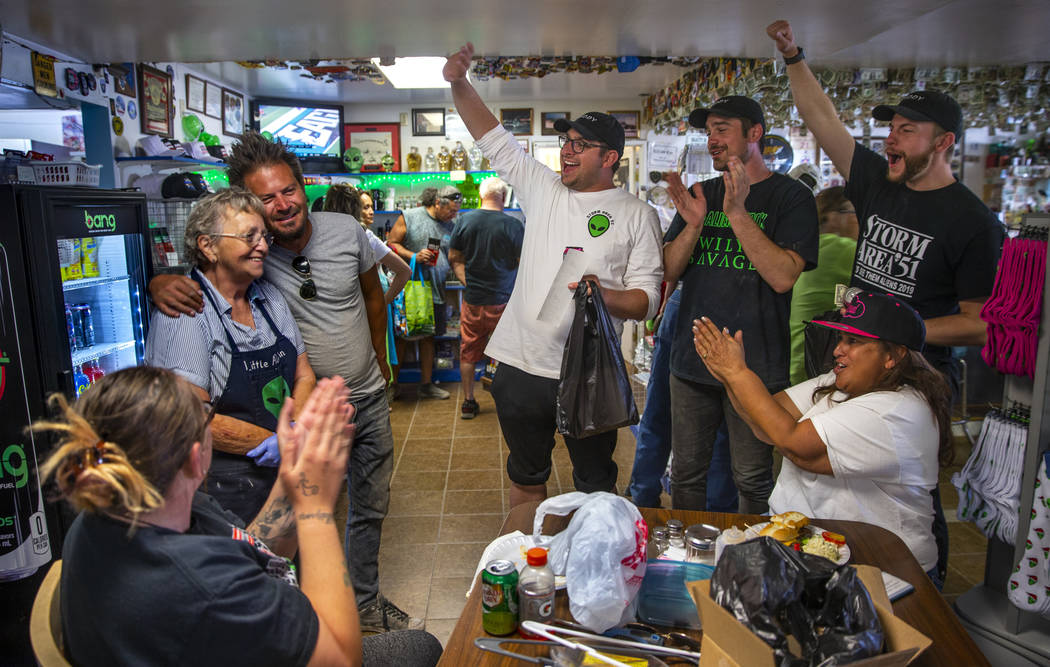 Pat Travis of the Little A'Le'Inn, left, is applauded by supporters and her daughter Connie West, right, after a successful first Alienstock festival on Sunday, Sept. 22, 2019 in Rachel. (L.E. Baskow/Las Vegas Review-Journal) @Left_Eye_Images 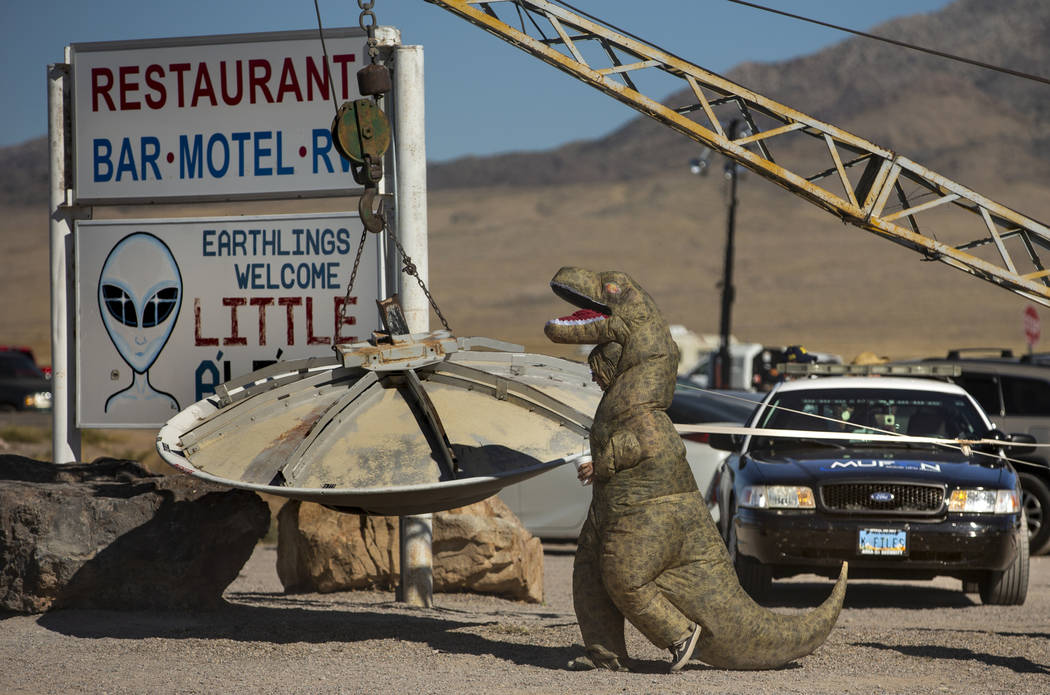 A T-Rex costumed festivalgoer walks over to the flying saucer outside the Little A'Le'Inn during the Alienstock festival on Saturday, Sept. 21, 2019 in Rachel. (L.E. Baskow/Las Vegas Review-Journal) @Left_Eye_Images 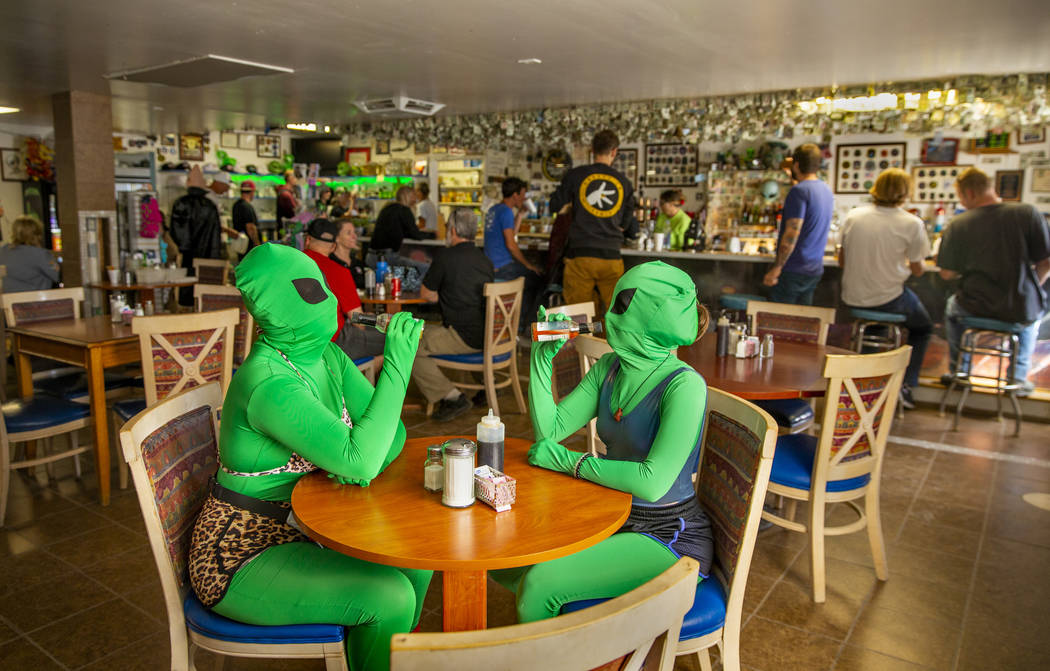 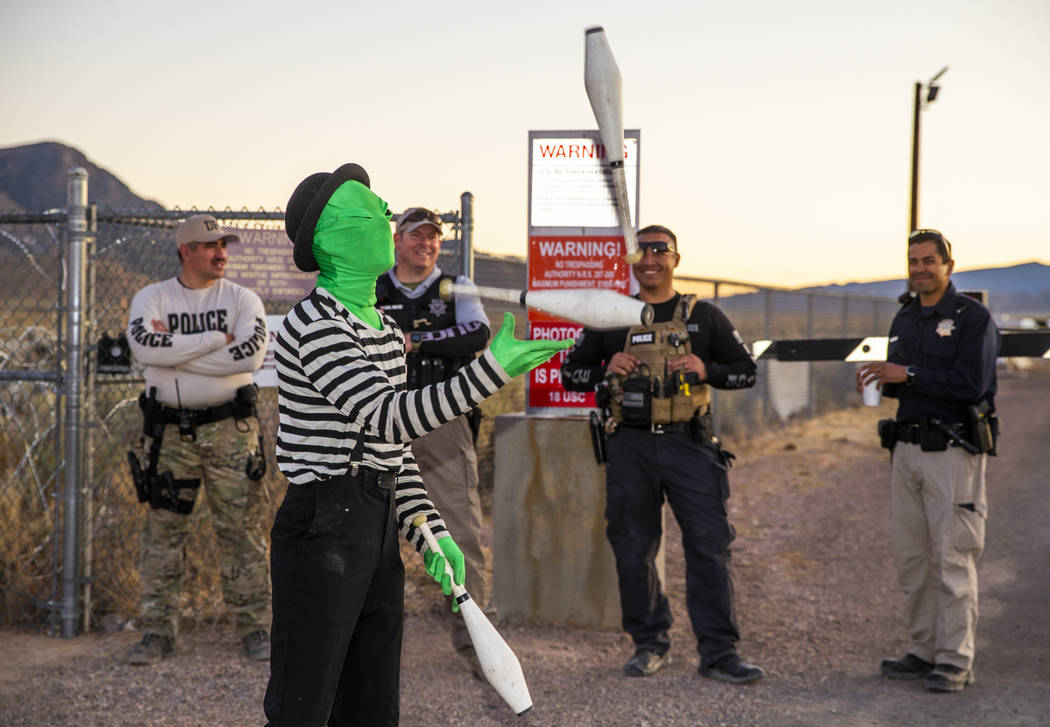 Scott Samford of Hollywood as an alien juggling mime entertains the security personnel at the back gate of Area 51 during the Alienstock festival on Saturday, Sept. 21, 2019 in Rachel. (L.E. Baskow/Las Vegas Review-Journal) @Left_Eye_Images 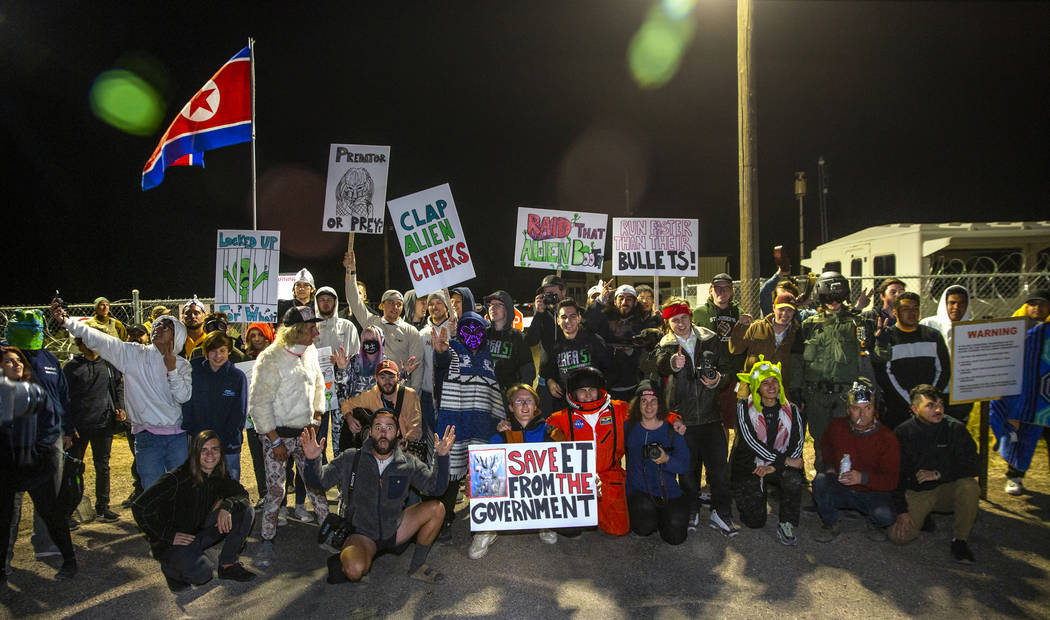 Individuals gather outside the back gate of Area 51 in homage to the original Storm Area 51 idea about 3 a.m. during the Alienstock festival on Friday, Sept. 20, 2019, in Rachel. (L.E. Baskow/Las Vegas Review-Journal) @Left_Eye_Images 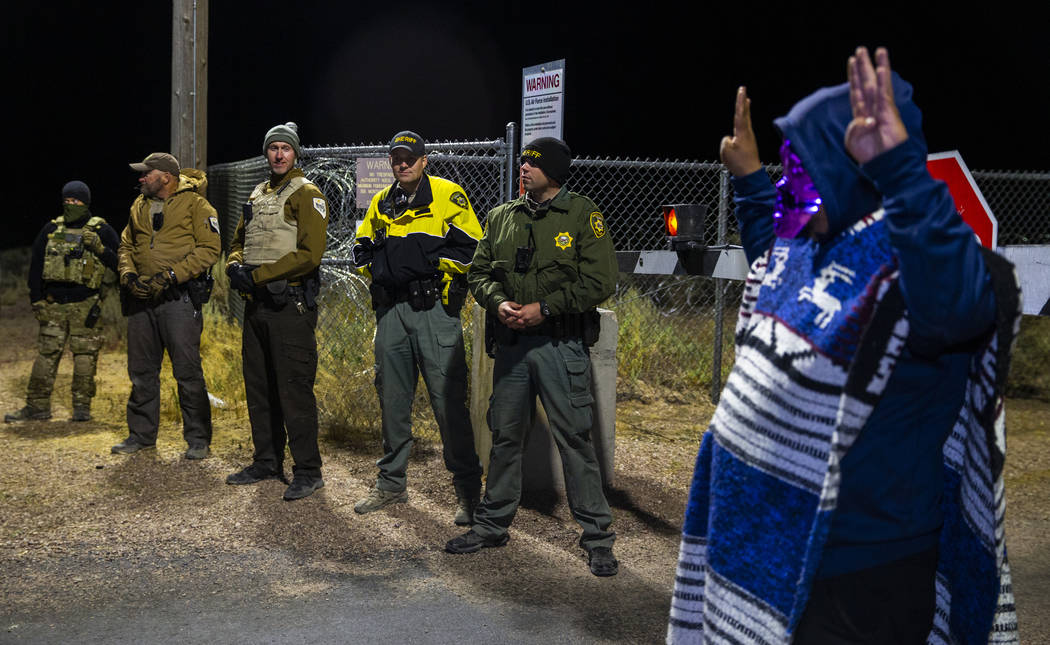 A costumed man stands near security personnel outside the back gate of Area 51 in homage to the original Storm Area 51 idea about 3 a.m. during the Alienstock festival on Friday, Sept. 20, 2019, in Rachel. (L.E. Baskow/Las Vegas Review-Journal) @Left_Eye_Images

The storming may be over for now, but the activity surrounding Alienstock and the Storm Area 51 phenomenon is far from finished.

The lawsuit alleges the defendants breached an agreement with West to help in organizing and financing the Alienstock event Sept. 19-22 in Rachel, wrongfully used the Alienstock name to promote a competing event in downtown Las Vegas and intentionally published false and defamatory statements about West and preparations for her event.

West alleges she was contacted by Roberts and Daily in late July to work together to organize Alienstock, one of two events spawned by the Storm Area 51 craze Roberts created with a Facebook joke that went viral.

The complaint alleges Roberts’ group agreed to secure sponsorships for the event and agreed to use that money to pay for the celebration, which took place last week. West was pegged with obtaining the permitting and event resources such as security and medical personnel.

West ended up paying for the entire event. Court documents show the Little A’Le’Inn spent or incurred expenses exceeding $109,000, while West spent up to $6,000 of personal money to hold Alienstock on about 30 acres of land in Rachel.

The complaint alleges that on Sept. 2, West paid Roberts and Daily $5,000 from revenue generated from parking reservations for Alienstock. The payment was said to be made in good faith that the two acquired sponsorship money to go toward the event.

DiMaggio, who said he is Roberts’ personal manager and partner in Alienstock and the planned tour based around the event, called the lawsuit “frivolous and unfounded” and said the group isn’t worried about the pending litigation.

“We have 100 percent confidence, and she’ll (West) be in for a long, expensive fight that has no merit on her side,” DiMaggio told the Las Vegas Review-Journal. “We have audio and video proof to challenge her accusations.”

The group’s attorney, Mitchell Bisson of Callister Law Group, said after reviewing West’s claim that they dispute almost everything alleged in the lawsuit.

Bisson also said counterclaims will be filed against West and the Little A’Le’Inn “for their blatant and continued infringement of the Alienstock trademark, as well as the many defamatory statements being made about my clients.”

While West alleges the defendants’ decision to shift participation from Alienstock to the Area 51 Celebration in Las Vegas was a money grab for Hidden Sound, the group said it shifted its focus for safety concerns tied to Alienstock.

“As my clients explained in the lead-up to Connie’s event in Rachel, their No. 1 concern and priority was safety,” Bisson said. “Connie refused to provide any assurances to my clients that the event was being properly planned and target-dates were being met. We see Ms. West’s lawsuit as nothing more than an attempt to sway public perception of the dispute in her favor.”