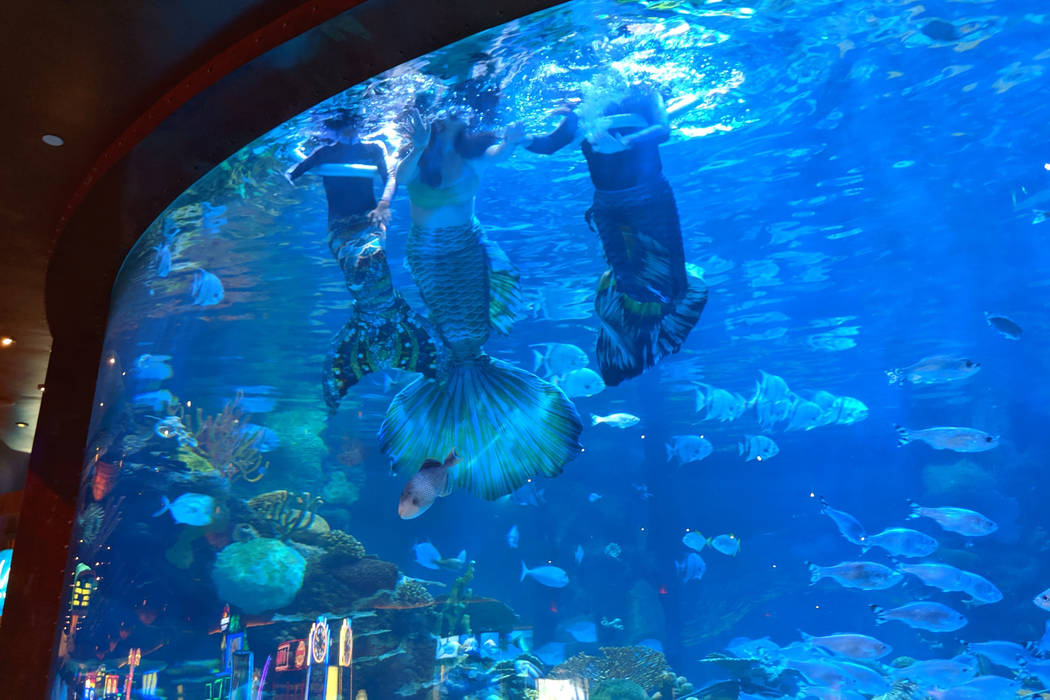 A Mermaid School lesson at Silverton's aquarium is seen from below. (Stacy D'Alessandro) 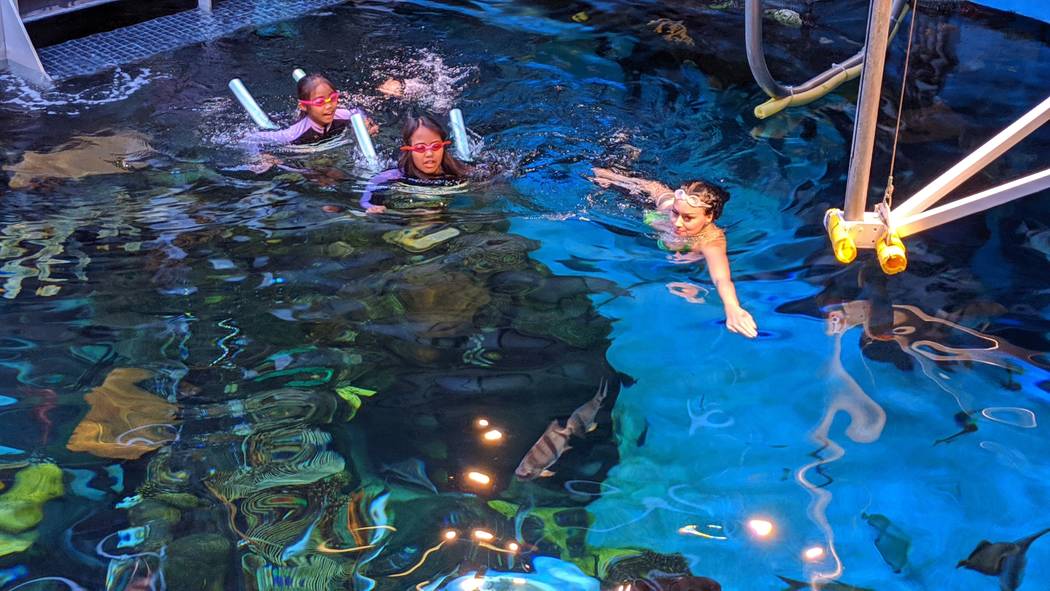 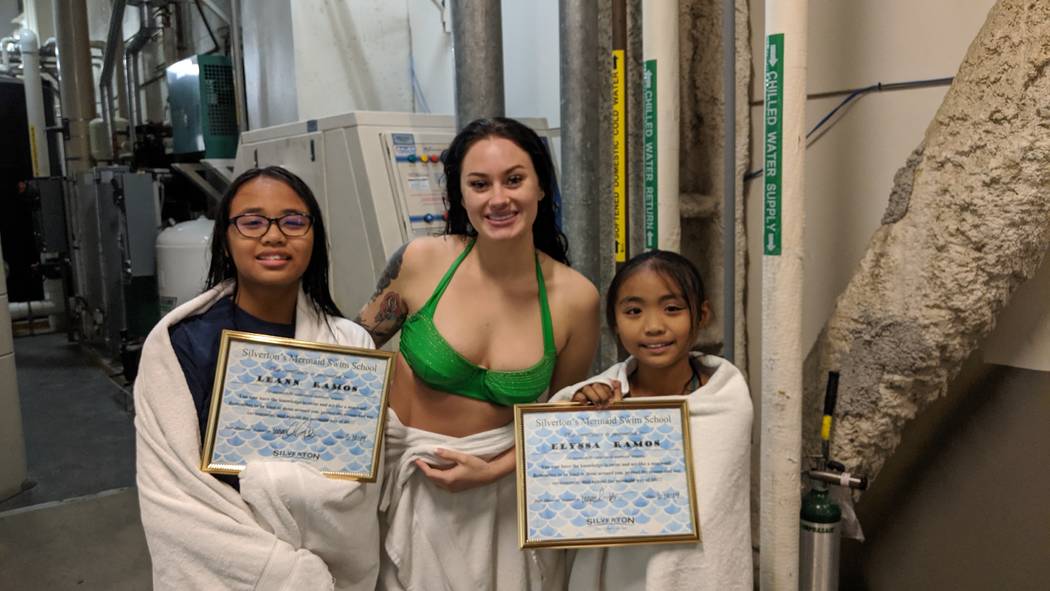 Elyssa Ramos might be afraid of fish, but that didn’t stop the 9-year-old from swimming with them during Mermaid School at the Silverton’s aquarium.

Elyssa, along with her 12-year-old sister Leann, learned firsthand what it’s like to wear fins and a tail and swim alongside sharks, stingrays and a variety of fish.

“The fins were heavy and hard to move,” said Elyssa, a fourth-grader from Torrance, California, who was visiting Las Vegas with her family. “The best part was seeing the fish even though I was scared. I got more comfortable with them.”

Marian Ramos, Elyssa’s mother, said Elyssa became nervous around fish after seeing a stingray on a vacation in the Cayman Islands.

“I said the mermaids are going to be there, so you are OK,” said Ramos, who was in Las Vegas celebrating her 15-year wedding anniversary with her husband, Emmanuel. “I just want them to have fun and see how mermaids swim. They have always wanted to try and swim like a mermaid.”

Logan Halverson, a Mermaid for six years at the Silverton, teaches select mermaid skills to children from 8:30 to 10 a.m. Saturdays and Sundays.

The school launched in September, and for $100 children ages 7-12 receive a behind-the-scenes tour of the aquarium, a warmup session and a mermaid swim lesson. The behind-the-scenes tour includes a glimpse of the quarantined area where new fish have a temporary home for 45 days or until they are ready to join the other fish in the main tank. During the warmup session, kids stretch and do jumping jacks before putting on their fins and tails.

“When the kids are in the water, I analyze their skills without the tail to see how well they can swim,” said Halverson, who has a background in synchronized swimming. “Once they have their fin and tail on, we practice a mermaid kick to the left and right. If the kids are comfortable, I can show them how to blow bubble kisses, which is something we do during our show.”

The sisters — who, according to Ramos, are fascinated with mermaids and own mermaid shirts and mermaid stuffed animals and use mermaid apps on their iPads — have been begging for a manufactured mermaid tail.

“We haven’t purchased one because we weren’t sure they would be able to use it,” said Ramos, adding that her husband discovered the Mermaid School on the hotel’s website. “I want to make sure they will enjoy it.”

Leann Ramos, who with her sister swam to the bottom of the tank and waved to onlooking guests, said the best part of the experience was seeing the fish in the tank and feeling like a mermaid.

The Silverton’s tails and fins, which weigh about 3 pounds, Halverson said, are loaned to the kids along with wet suits, goggles and towels. Children should bring their own swimsuits.

Registration for the school is available on the hotel’s website, and sessions can accommodate up to six children at a time. When the class reaches capacity, two mermaids and two rescue diver certified safety divers accompany the kids, according to Kristin Janise, aquatic safety manager for the Silverton.

“We’ve always had our own mermaids, so we figured why not use them and have them teach?” she said. “We do have kickboards and poles throughout.” The 117,000-gallon saltwater tank is 15 feet deep and is kept at 78 degrees. It’s home to more than 2,000 individual animals and more than 100 species, Janise said.

Halverson, who often shares the mermaid show spotlight with her younger sister Hannah, said she feels like she sees a new animal every time she is in the tank.

“We definitely have our favorites,” she said of her and her sister. “We have one little dog-faced puffer and we named him Frank. He’s really small and squishy and really clumsy. He’s our favorite.”

The batfish, however, are not so well-received.

“I don’t know if they think our hair is seaweed, but they will pull our hair during the shows, so we have to swat them away,” she said.

Halverson said when she is not teaching Mermaid School, she works a nine-hour shift with 15-minute shows on the hour followed by a half-hour break. She said the best part of her role as a Mermaid is seeing the kids, and the school allows them to get a one-of-a-kind experience with a certificate of completion at the end.

“There’s no other place in Las Vegas, except for maybe The Mirage with the dolphins, that you can get inside an aquarium and swim around with the fish and be immersed in that kind of aquatic experience,” she said. “It’s a very controlled environment, yet you are still seeing so many fun things and being very adventurous. It’s a very different perspective than just being outside in front of the tank. You actually get to be inside of it and see what it’s like for us, for the performers on the inside.”

What: Children can learn to swim like mermaids in tails