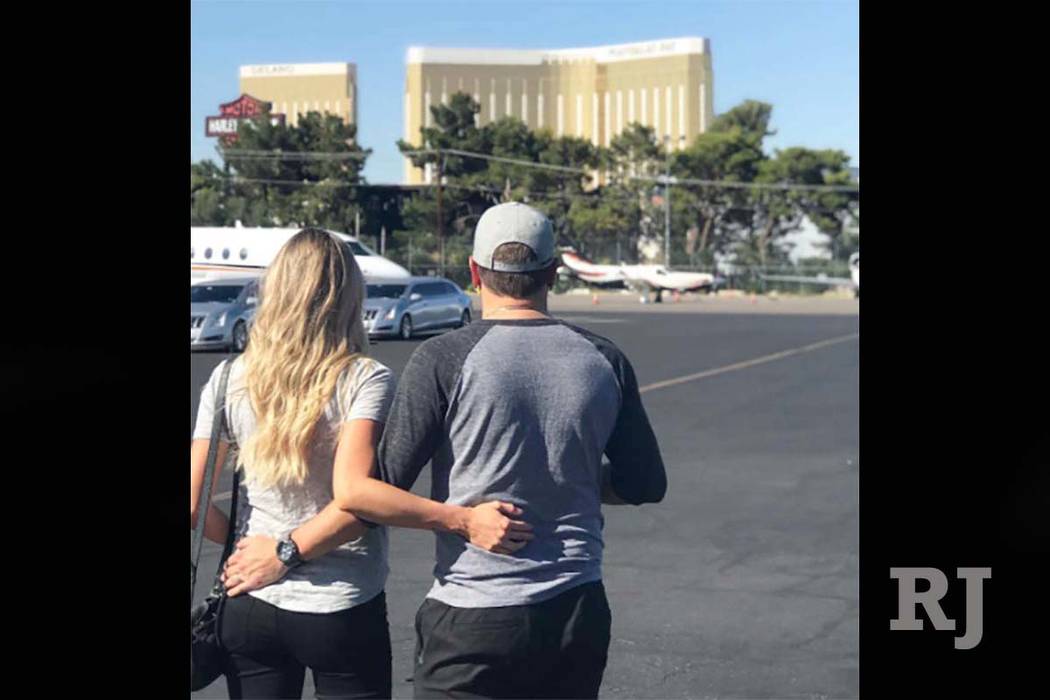 Jason Aldean’s wife, Brittany, posted this photo of the couple on her Instagram account on Sunday, Oct. 8, 2017. They visited patients at University Medical Center on Sunday. (Instagram/Brittany Aldean)

Country singer Jason Aldean visited University Medical Center on Sunday, just one week after the Oct. 1 shooting that claimed the lives of 58 concertgoers and injured hundreds of others at the Route 91 Harvest festival.

“Our extreme gratitude to Country Music Star Jason Aldean for visiting UMC today. Jason spent time with our patients who were critically injured during the Las Vegas shooting. His visit helped heal hearts and cheer those who were wounded in this tragedy. #vegasstrong.”

His pregnant wife, Brittany, posted a photo on Instagram of the couple embracing and looking towards the Mandalay Bay, which is where Stephen Paddock shot from a hotel suite at Route 91 Harvest Festival attendees.

“Feels surreal being back in Vegas today,” Brittany said on Instagram. “Visiting some of the strongest people we have ever met… fighting the toughest battle of them all… for their lives. You have helped us try to begin the healing process by seeing the strength each one of you have. Thank you for today. We will never forget.”

The day prior, Aldean performed on “Saturday Night Live,” declining to participate in a UFC ceremony to honor the victims and first responders at T-Mobile Arena, UFC president Dana White said.

Aldean was performing at the festival Sunday when the shooting started.

Feels surreal being back in Vegas today. Visiting some of the strongest people we have ever met… fighting the toughest battle of them all… for their lives. You have helped us try to begin to start the healing process by seeing the strength each one of you have. Thank you for today. We will never forget. #vegasstrong 🙌🏼

Thank you to Country Music Star @Jason_Aldean for visiting today. His visit helped cheer those who were wounded in this tragedy #vegasstrong pic.twitter.com/2smHZebefU