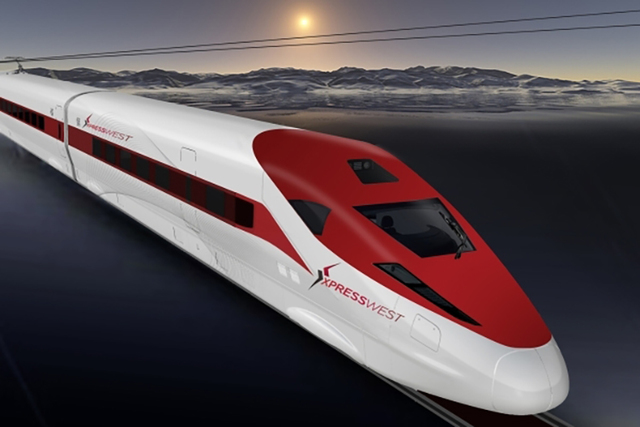 Construction for the first leg was supposed to start in fall 2016, but that date was pushed to early 2017.(Courtesy XpressWest)

When it comes to the development of a high-speed railroad line connecting Las Vegas with Southern California, it’s still all about the funding — or, more precisely, the lack of it.

A representative of XpressWest on Wednesday gave the Nevada High Speed Rail Authority an update on plans to build a line between Las Vegas and Victorville and Palmdale, California, and to Union Station in downtown Los Angeles.

Andrew Mack, chief operating officer of XpressWest, also told the five-member authority board that the company may look into the possibility of building a station near the proposed 65,000-seat domed stadium that is under consideration on 62 acres at Russell Road and Interstate 15.

The property is one of two locations XpressWest has explored for a Las Vegas terminus for the initial phase of a 185-mile, dual-track line to Victorville. It’s also a leading candidate for the site of the $1.9 billion stadium that could house the Oakland Raiders if the team were to relocate to Las Vegas.

Mack said the company would look at the prospect of jointly using the Russell Road site for a station close to the proposed stadium. He said it’s too early to project whether there’s enough room at the site for both.

The second suggested station site is west of I-15 near the CityCenter complex, south of the Rio hotel-casino.

The financing of the rail line, which has an $8 billion price tag, is much cloudier.

In his 40-minute presentation, Mack explained the many moving parts in his company’s efforts to get the XpressWest project on track.

The company is coordinating with 11 government and transportation entities to get the permits needed to build.

The goal of providing service between Las Vegas and Union Station is divided into three separate projects — the Las Vegas-to-Victorville piece, a 50-mile connection between Victorville and Palmdale where travelers could change trains to the Los Angeles Metrolink conventional rail and, finally, single-seat high-speed rail service to Union Station with connecting service to Burbank and areas south of Los Angeles.

Mack said the ridership study is key to making pitches to investors to finance the projects.

XpressWest in June severed ties with China Railway International as a possible financial partner. At the time, company executives said they terminated the partnership because China Railway had difficulty meeting performance deadlines and had trouble getting the authority to proceed with development. XpressWest’s top executive, Tony Marnell, said the company would pursue other financing options. Mack reiterated that Wednesday.

“There was a perception in the market that they were exclusively (our partners),” Mack said. “It’s a process that takes time and a lot of due diligence and they’re going to want to see the (ridership) reports.”

George Smith, who chairs the authority board, said completion of the ridership study should trigger progress.

“I think we made a lot of progress today in understanding where XpressWest is in the process,” he said. “The big challenge is getting the financing.”