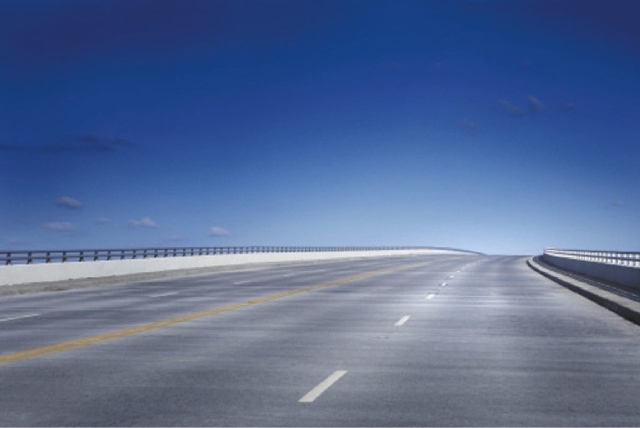 The Nevada Department of Transportation is about to make a $600 million bet on Project Neon, the reconstruction of the busiest and most congested road in the state.

The project originally was to be built in five phases over 20 years, but managers are now planning on combining three phases into one and outsourcing it to a private contractor: the design, the financing, the building, the operation, even the maintenance. For the next 35 years.

Officials say it should be cheaper and faster.

“When we can build three phases of a project like this at once, it drastically reduces the impact on the public,” said Cole Mortensen, the project’s manager.

Interstate 15 carries about a quarter million cars a day between the Spaghetti Bowl and Sahara Avenue. That makes it the freeway with the most traffic in Nevada.

There are an average of four crashes on that stretch of road every day. Traffic is constantly backed up, especially during rush hour, and especially merging from southbound U.S. Highway 95 onto southbound I-15.

Traffic is expected to double by 2030.

Project Neon is supposed to fix the problem by reconfiguring interchanges and ramps and linking the carpool lanes on U.S. 95 to I-15. Linking those lanes last year on U.S. 95 and Summerlin Parkway drastically reduced congestion there, drawing 36,000 cars a day to the flyover.

But Project Neon, one of the largest projects in state history, is expected to cost more than $1 billion. The state doesn’t have that much money. The three phases that will be combined and outsourced are expected to cost $600 million.

Doing the project either on a pay-as-you-go basis or by borrowing money for each phase could take decades. The department does not have the legal authority to borrow the entire cost of the project at once.

Such public-private partnerships, called P3 arrangements in the industry, are becoming more popular. Though it’s never been used in Nevada, two major projects in Florida, the Port of Miami Tunnel and reconstructing a portion of Interstate 95 through Fort Lauderdale, are being done this way right now. The Presidio Parkway project near San Francisco also uses this arrangement.

Many P3 projects involve toll roads, where the contractor is paid through revenue from tolls.

But Mortensen said that will not be the case for the I-15 project.

Instead, they will use what’s called an “availability payment” option. It would essentially work like this: The contractor would build the project and NDOT would pay when milestones are reached. Those milestones could include the opening of the HOV lane connector, for example. The agreement would last for 35 years, with payments continuing for the life of the contract.

The Federal Highway Administration notes that while a recent innovation in the United States, availability payment arrangements are common in Canada, Europe, and Australia.

The potential advantages are many. As outlined in a 2012 report from the non-partisan Congressional Budget Office, “such partnerships have built highways slightly less expensively and slightly more quickly, compared with the traditional public-sector approach.”

The private entity handles the financing itself. Federal loans are available. This leaves the state free to use the money it currently has for other projects.

The approach allows a large project to get underway much more quickly if the state does not have all the money necessary to finish the project. It also locks in costs from the outset.

Robert Poole, director of transportation policy for the Reason Foundation, a libertarian think tank, said federal funds aren’t as plentiful as they used to be. And fuel tax revenues, the major source of highway funding, are down as cars become more fuel efficient.

As a result, state departments of transportation are looking for new ways to fund projects.

He said P3 agreements shift much of the risk to the private entity instead of the taxpayer. They also help ensure against missed deadlines.

“It gives (the contractor) a real incentive to do the design in such a way to be more buildable and to make sure the costs don’t overrun,” he said.

That’s because they don’t get paid if the work isn’t done.

It also guarantees the highway will be maintained because it has already been budgeted. Often, maintenance is one of the first things government agencies cut in times of budget crises.

But there also are risks.

The state would be in a contract, with bills due no matter what. If fuel tax revenue keeps falling — and fuel economy keeps improving, so the revenue probably will — there might not be enough money.

Mortensen said the department has taken into account future revenue projections. He said it is not unlike taking out a mortgage that runs for 35 years.

He added that he expects federal funding will cover most of the project’s costs. Poole said he prefers toll road arrangements over availability payments for this reason.

Mortensen said the department intended to do the project traditionally. But an unsolicited bid was made in 2011. NDOT documents say a proposal from the NEON Mobility Group, a team led by ACS Infrastructure Development Inc., came in for phases one and three.

ACS is the U.S. subsidiary of Concesiones de Infraestructuras, one of the largest private transportation developers in the world. It does business in Europe and South America and operates about two dozen highways around the world.

When an unsolicited proposal comes in, Mortensen said, there are three options: Reject it, accept it and negotiate, or send out requests for proposals, known as RFPs.

Department officials investigated public-private partnerships and liked what they found, Mortensen said. They decided it would work better, though, if phases one, three and four were combined, instead of just phases one and three.

■ One: An HOV connector between U.S. 95 and I-15, HOV lane access to I-15 at Wall Street, reconstruction of the Charleston Boulevard interchange, and a Grand Central Parkway and Western Avenue bridge over Charleston.

■ Two: A Martin Luther King Boulevard and Industrial Road connector, and an Oakey Boulevard and Wyoming Avenue bridge over the railroad tracks.

■ Four: Southbound ramps on I-15 between the Spaghetti Bowl and Sahara.

■ Five: Northbound ramps on I-15 between the Spaghetti Bowl and Sahara, and reconstruction of I-15 south of Oakey.

The department’s board gave the approval to pursue the new arrangement. Mortensen said officials will now get together an RFP and expect to have a contractor lined up by the end of next year, should things go as planned.

Construction would start in 2015, and would be completed for phases one, three and four by 2018.

The fate of phases two and five remain up in the air.

The department might build them the old-fashioned way, or it could do another public-private partnership, but only if another unsolicited proposal comes in.