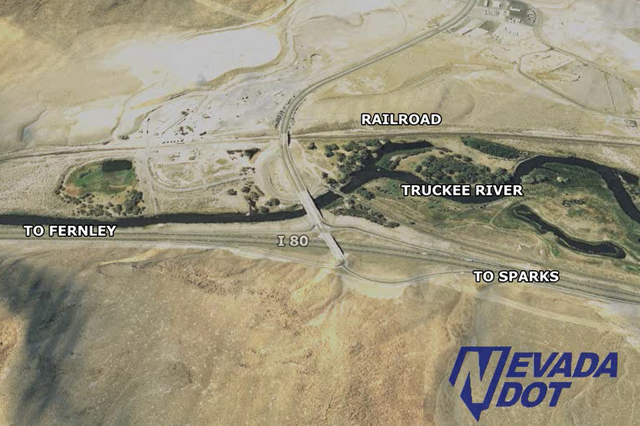 On Monday, the state Transportation Board will consider approving a design-build contract for a five-mile-long widening of U.S. Highway 93 at Interstate 15 for the Faraday plant now under construction at Apex in Southern Nevada.

The road project at the Garnet Interchange will include a flyover exit from U.S. 93 into the $1 billion, 3-million-square-foot plant at a total estimated cost of $45 million to $50 million. The project is expected to break ground in June 2017.

Then on Tuesday, Gov. Brian Sandoval and other officials will break ground on the USA Parkway extension connecting Interstate 80 and U.S. Highway 50 through Storey and Lyon counties. The project was part of a deal to bring Tesla’s battery manufacturing gigafactory to the Tahoe-Reno Industrial Center east of Reno.

Ames Construction was selected as the contractor for the 12-mile project in January with a $75.9 million bid.

Both road projects were reviewed by the Nevada Legislature in two separate special sessions, one in September of 2014 for Tesla and the other in December of 2015 for Faraday.

The Nevada Department of Transportation is responsible for overseeing both projects.

While both projects were part of the economic incentive package to bring the companies to Nevada, the improvements will benefit other companies as well. The USA Parkway project will also provide access to the Tahoe-Reno Industrial Center from Lyon and Churchill counties, which could mean much needed economic development for the region. The U.S. 93 project will help improve the infrastructure to Apex and potentially lure other companies to the site.

The improvements to U.S. 93 will expand the road from two to four lanes and include a frontage road at Grand Valley Parkway inside the Apex Industrial Park. Parsons Brinckerhoff is performing the preliminary design, engineering and environmental work.

Sandoval said both projects have been in the planning stages for several years.

“Nevada’s economic development successes have created the need for these roads to be prioritized and placed on an accelerated schedule,” he said in a statement. “USA Parkway will connect families in Storey and Lyon Counties directly with opportunities found at Tahoe-Reno Industrial Center. Also, the widening of U.S. Highway 93 is a critical step toward making Apex Industrial Park a global center for advanced manufacturing and development.”

The USA Parkway was originally constructed as a privately built, six-mile-long road connecting Interstate 80 to the Tahoe Reno Industrial Center. The project will extend the parkway south to reach U.S. 50 near Silver Springs, creating an approximately 18-mile-long, four-lane state roadway between Interstate 80 and U.S. 50.

The project is projected to reduce travel times by as much as 38 percent for those traveling between U.S. 50 and I-80. In 20 years, more than 17,000 vehicles daily are anticipated to travel the new segment of USA Parkway.

Originally slated for completion in 2019, the USA Parkway extension is being fast-tracked using the design-build method of construction and is scheduled to open to traffic by late 2017.

“We’re dedicated to providing a transportation system that keeps Nevadans safe and connected,” explained NDOT Director Rudy Malfabon. “By enhancing safety and reducing travel times and associated vehicle use and emissions, the societal benefits of extending the USA Parkway are projected at more than $600 million for the first 20 years.”

The Legislature approved a $1.3 billion tax incentive package to bring Tesla to Nevada.

Tesla’s planned $5 billion, 10 million-square-foot gigafactory, a joint project of the electric vehicle maker and the Panasonic Corp., will produce batteries for the moderately-priced vehicle, the Model 3, expected to be in the price range of $35,000 when it becomes available in 2017.

TESLA CEO Elon Musk said last week that $2 billion has been invested in the factory so far by the company and its partners, and that $20 million in tax breaks have been received so far.

The Faraday tax breaks and other improvements, including the road project, totaled $320 million. The company broke ground on the factory in April.