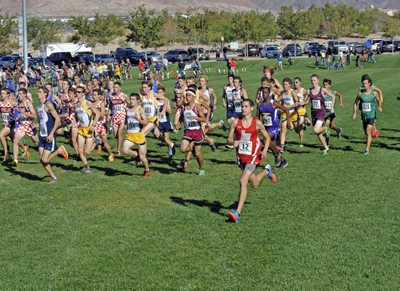 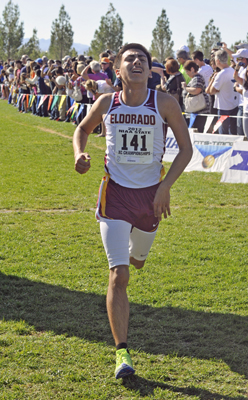 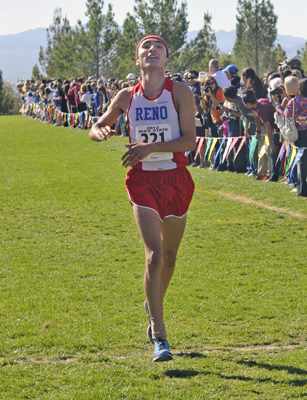 Things couldn’t have worked out much better for Mike McGuire on Saturday.

It added up to the Bulldogs taking a 27-44 victory over Galena to win the Division I state meet at Veterans Memorial Park in Boulder City. The state title is the third since 2008 for Centennial, with all three coming in Southern Nevada.

“The kids ran out of their minds today,” McGuire said. “We did exactly what we needed to do: win the matchups. We did that, all five. It was an incredible win for us.”

The team race was settled early as Centennial’s trio of Dajour Braxton, Jackson Carter and George Espino, followed by Wyatt Morris and Tyler Giles, each were among the leaders from the start and finished 3-4-10-17-20 for Centennial’s 27 points.

Individually, the race was settled late.

“It was a great team win for us,” Carter said. “I just stayed up there with Dajour. I knew our other guys would come through, and they did.”

A pack of eight runners blasted through the 2-mile mark in 10:38.

In the final mile, Cardenas, who finished third as a sophomore on the same course, broke away and cruised to victory.

“We were up against tough competition,” Tech coach Tony Kyriacou said. “We were underdogs going in. So taking second, I can’t complain. Martin (Ponce) ran really well. Our kids performed as well as I could have hoped for.”

The Division III race was all North Tahoe, which placed runners 1-2-5-6-8 for a score of 19. Incline was runner-up with 50 points.