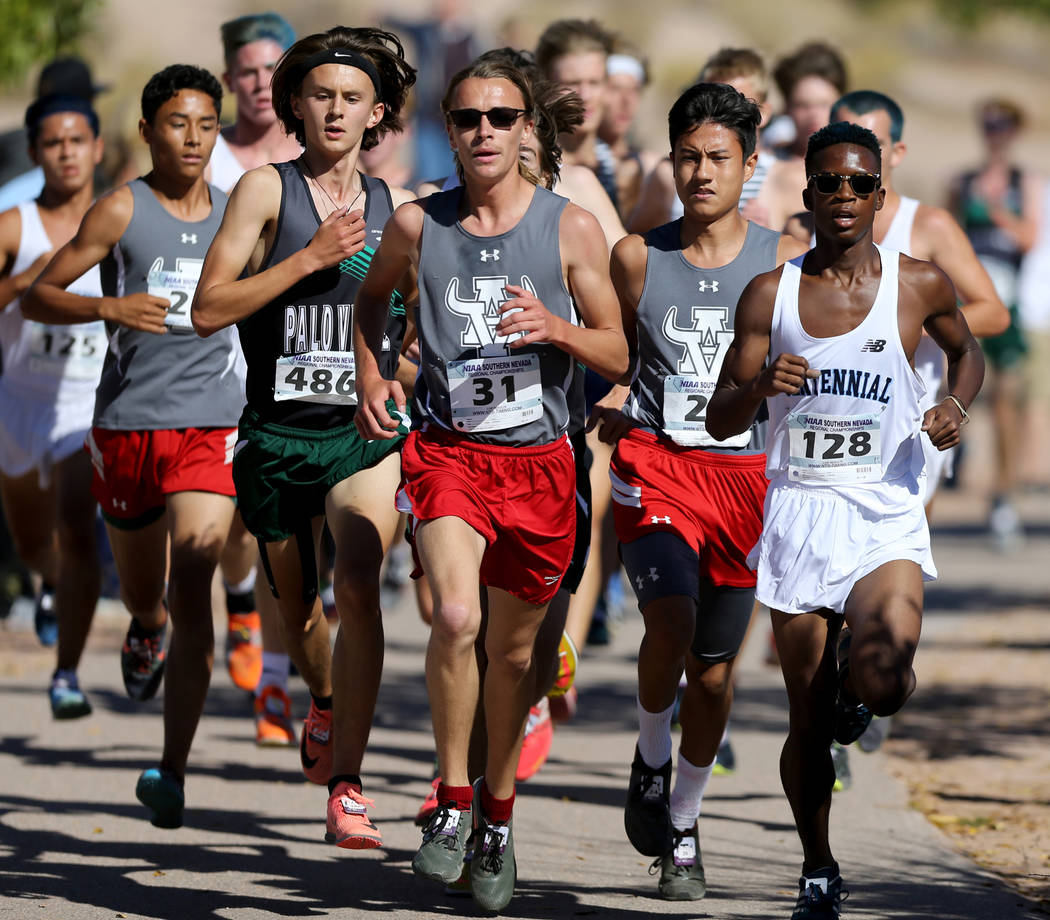 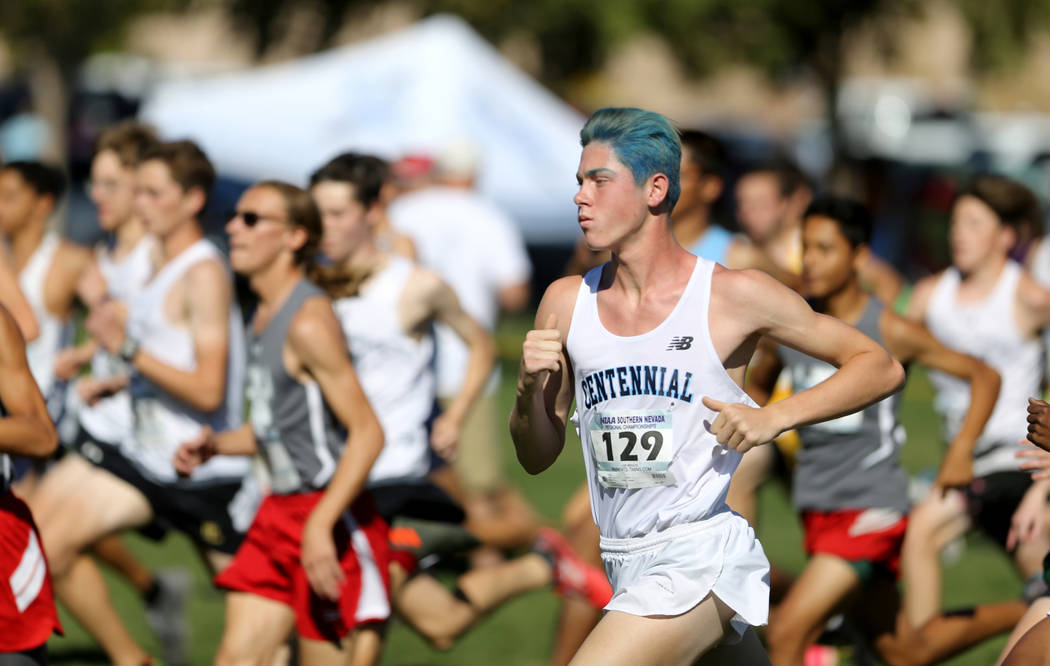 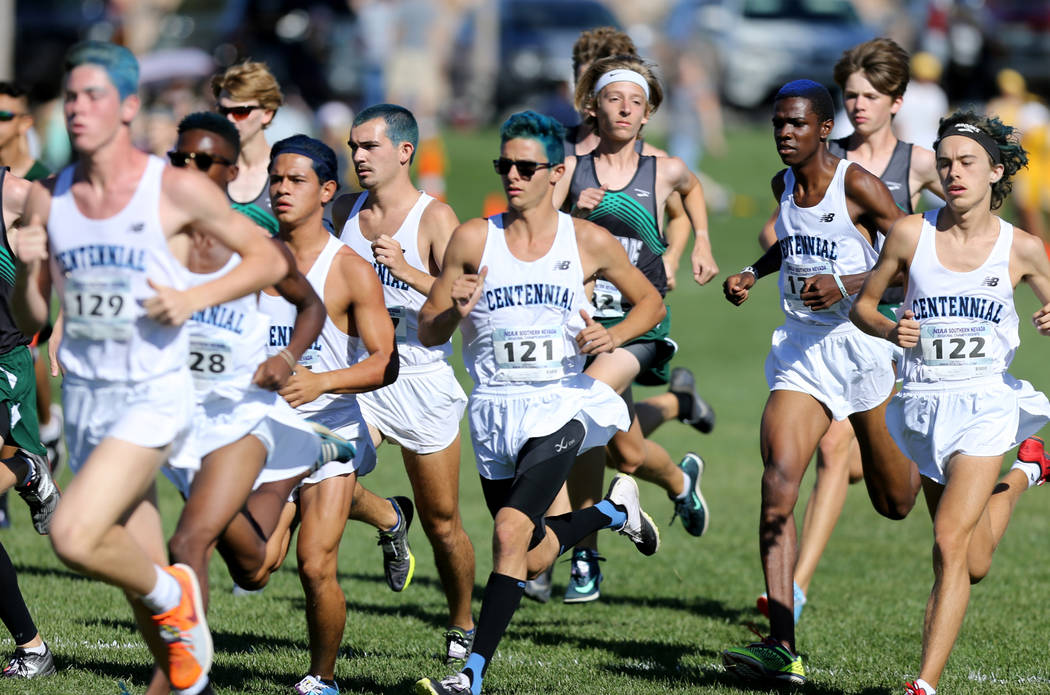 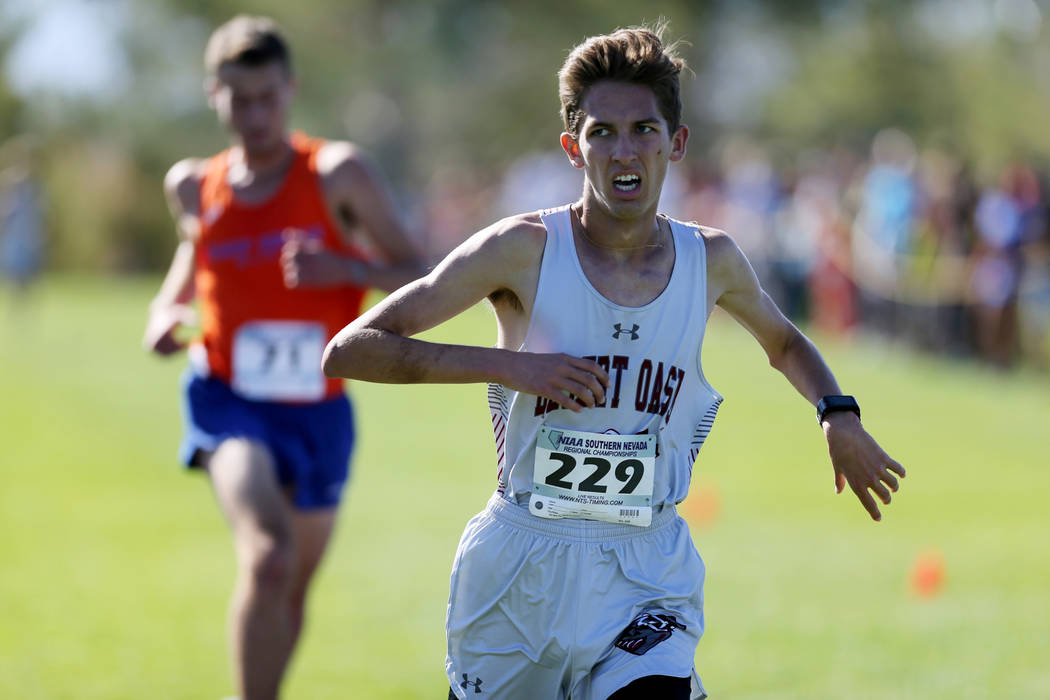 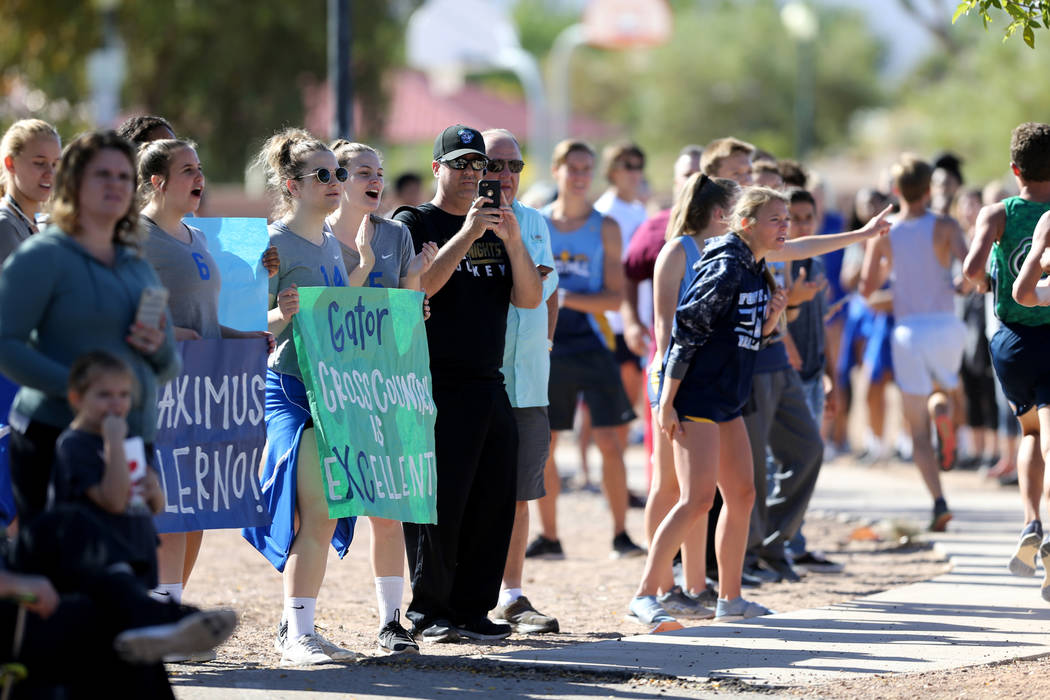 Conner Nicholas didn’t have his usual kick in the end, but the senior had enough to help Desert Oasis deliver a historic day at the Southern Region Championships on Friday.

The Mountain Region race wasn’t decided until well after it ended. Palo Verde senior Noah Jordan took the lead late with Arbor View senior Noah Ayala in second. Jordan made a turn off the course late, tried to recover, and wound up crossing the finish line first with Ayala a few seconds back.

Arbor View protested, and Jordan was disqualified for going off-course. Ayala was bumped to first and Arbor View took third over Palo Verde for a state qualifying berth, though the Panthers will still be well-represented at next week’s state meet.

In the 3A Southern Region race, Valley junior Christian Franklin easily won, and senior Ian Cook of The Meadows won the 2A region title.

A pack of runners came out quickly with Nicholas settling in at the back of a large pack for the first mile. The senior moved forward by the second mile and was joined by Desert Oasis teammate Landon Morrison and Swenson. Swenson was still sticking onto Nicholas’ shoulder with half a mile to go. Nicholas made one more surge to build a gap and then managed to hold Swenson at bay in the end.

“I was feeling somewhat tired,” Nicholas said. “I didn’t expect him (Swenson) to stick with me. I did enough to win here and hopefully I can do better at state next week.”

Eventually, by the second uphill climb on the rough sandy portions of the course Jordan, Ayala, Centennial’s Alexander Miller, and Faith Lutheran’s Aidan Baughan moved to the front.

Jordan started to pull away with only Ayala left to give chase. Then, came a fateful turn at a circle less than half a mile from the finish. Jordan turned early, was called back, but wasn’t deemed to have fully corrected his mistake. In the end, Jordan crossed the finish line first but Ayala was the official winner in 17:04.7 after Arbor View’s protest was upheld.

“It was confusing at the end,” Ayala admitted. “He turned left and I went around the circle. I feel bad for him because he is a good guy and has been a real good competitor this season.”

Centennial had six finishers in the top 15 to score 52 points, topping Shadow Ridge (58). If the initial Jordan-Ayala finish held, the two teams would have tied for third, but the change in the standings put Arbor View (62) in third and Palo Verde (84) fourth.

Palo Verde is expected to still have five at-large individual qualifiers for next week’s state meet.

Franklin took the lead early and then served as pacesetter for some of his teammates through the early portion of the race. However, he took control after two miles and cruised to the finish in 17:05.1.

Valley’s Donovan Jones was second in 17:42.6, and teammate Aidan White third in 17:47 to help the Vikings win the team title.

“One thing I wanted to do was not focus on the individual but on my team,” Franklin said. “I set the pace early to help out my teammates. I wanted to help them for the first two miles, let them push through for themselves.”

After Valley’s 45 points, Pahrump Valley was second with 62 followed by Somerset-Losee (72).

Cook chose to hang right off the lead for most of the race, but made a decisive kick with half a mile to go, eventually crossing the finish line first in 17:52.4.

“I’m fortunate in that I have a lot of experience on this course,” Cook said. “My plan was to sit on the front for two and a half miles and then go in final half-mile. When I went, the others were already tired.”

The Meadows also scored 51 points to claim the regional team title with Lake Mead (77) and Laughlin (83) also moving on to state.