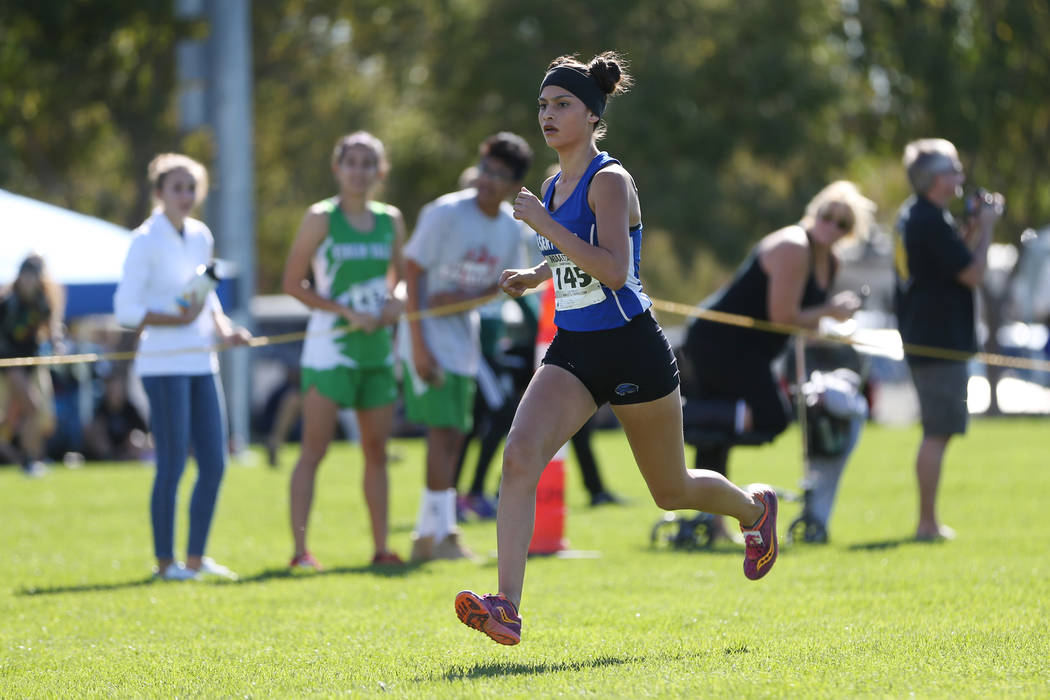 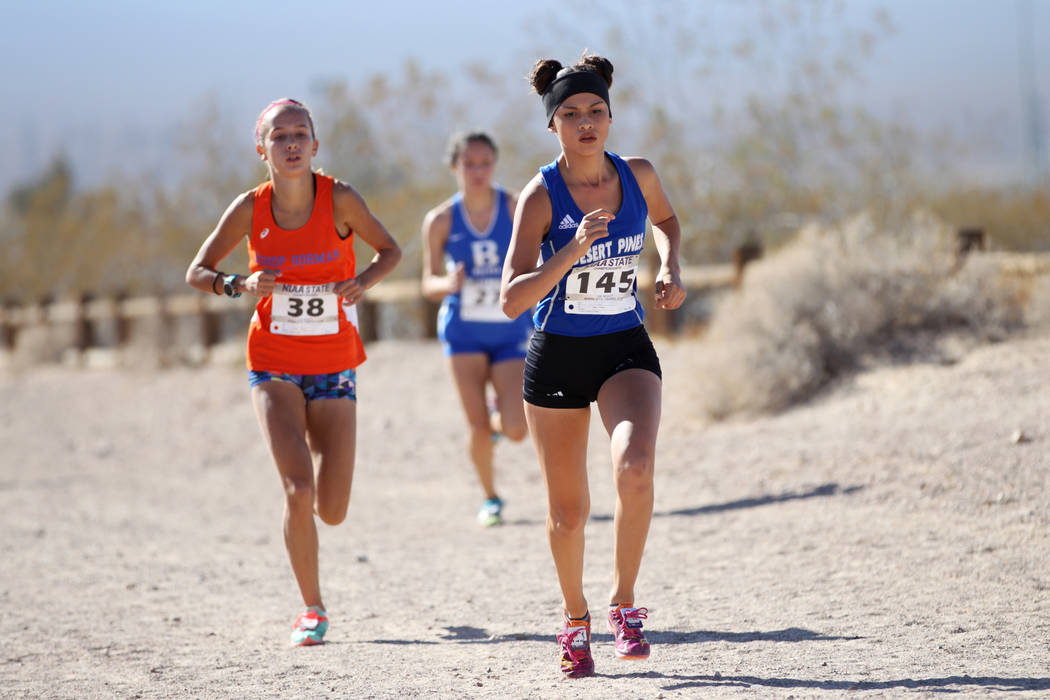 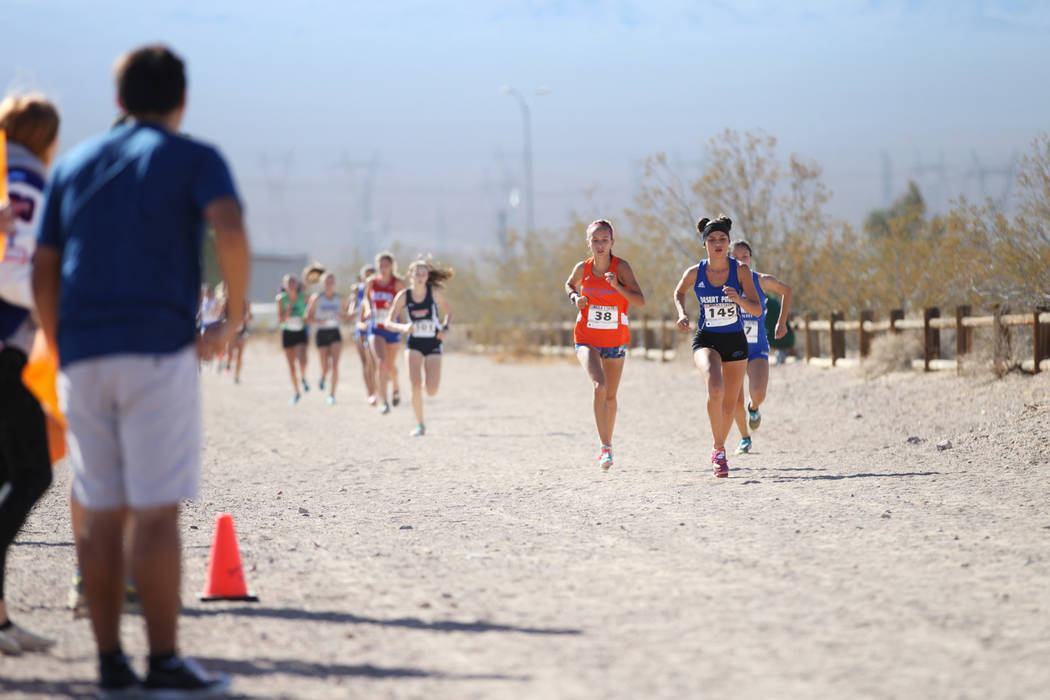 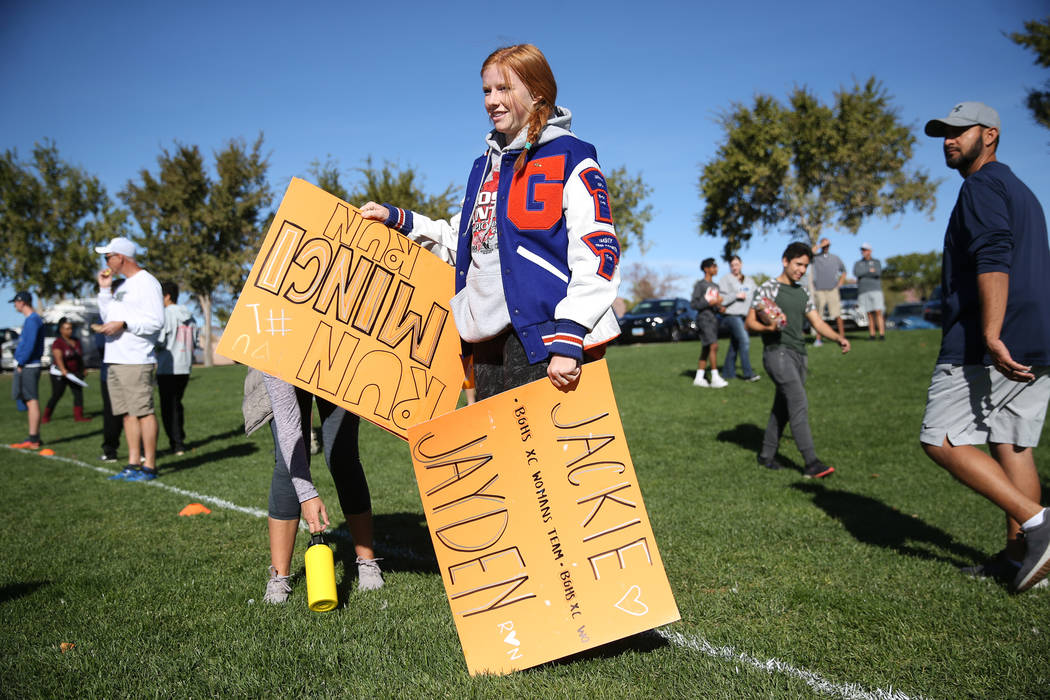 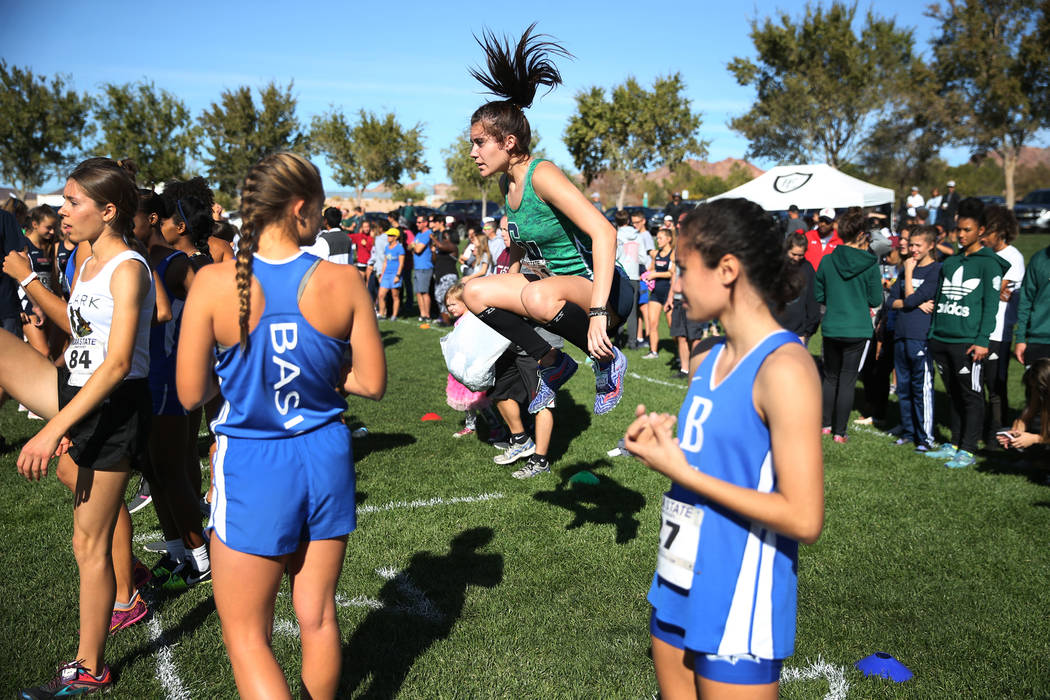 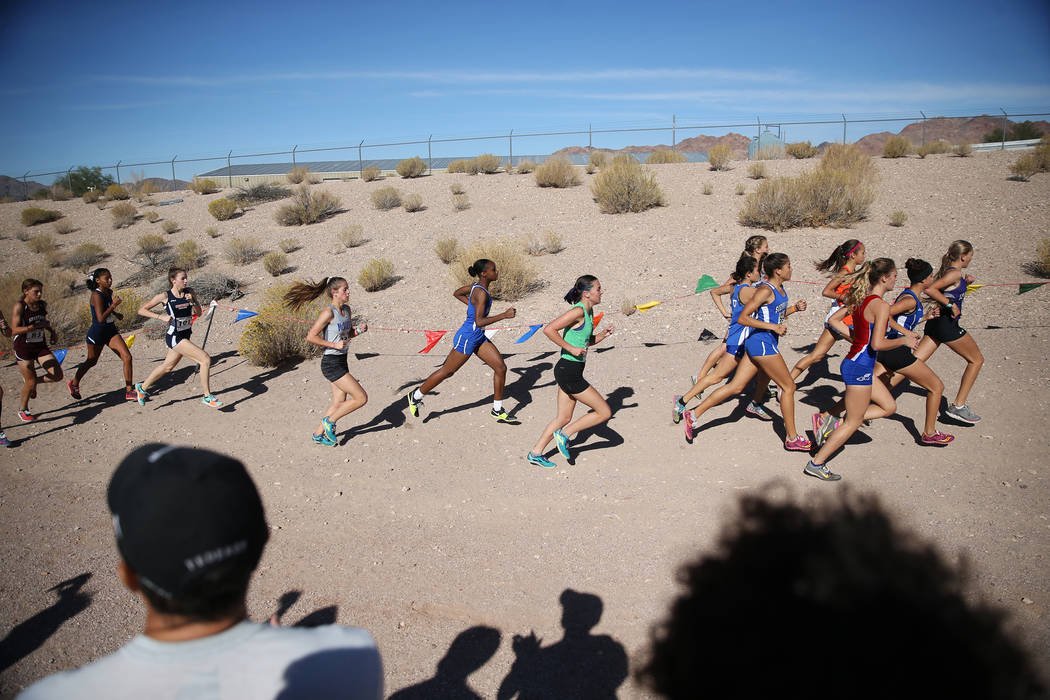 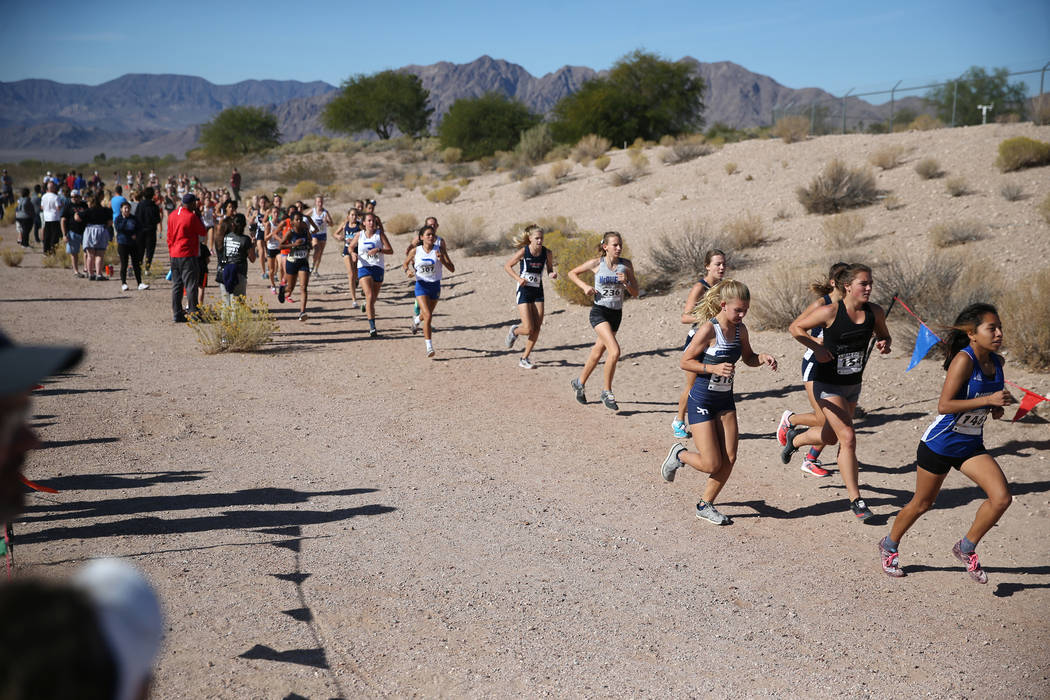 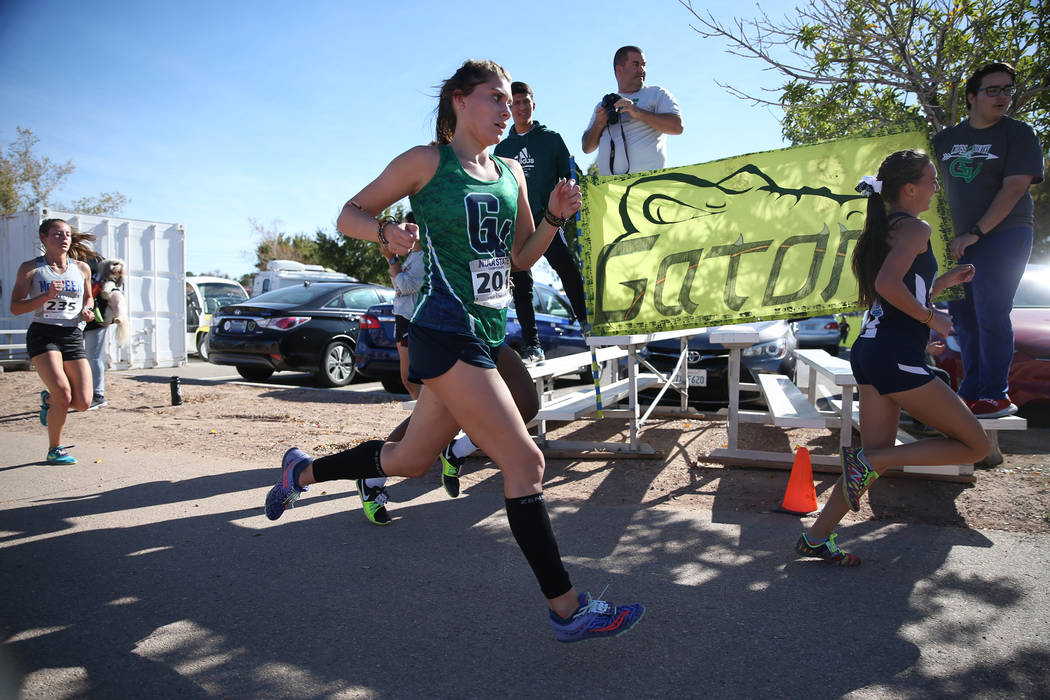 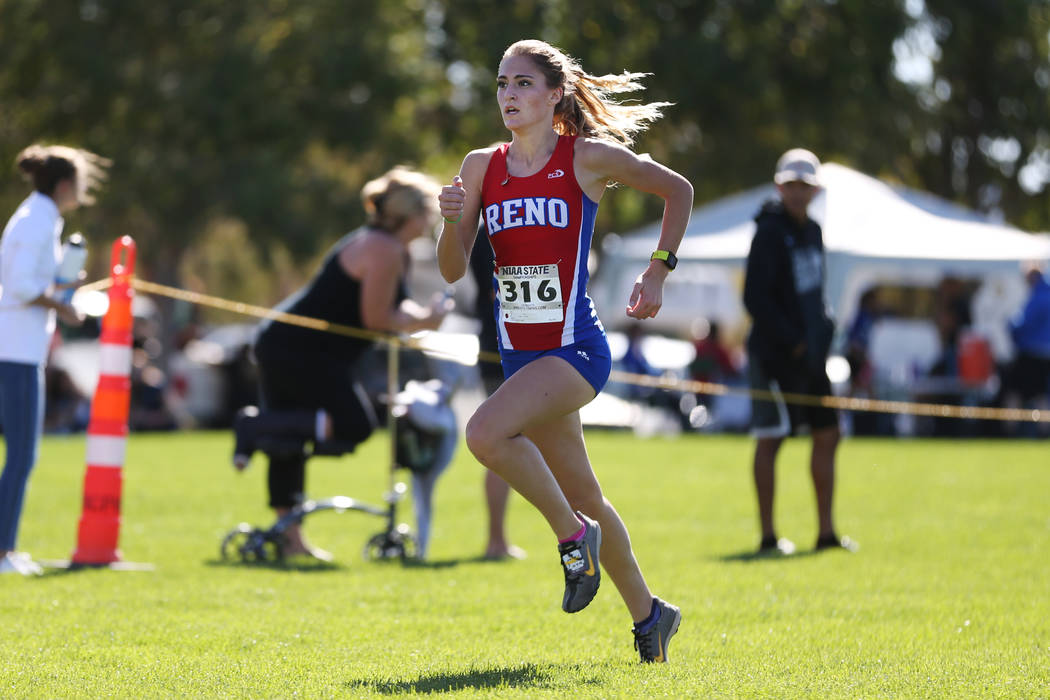 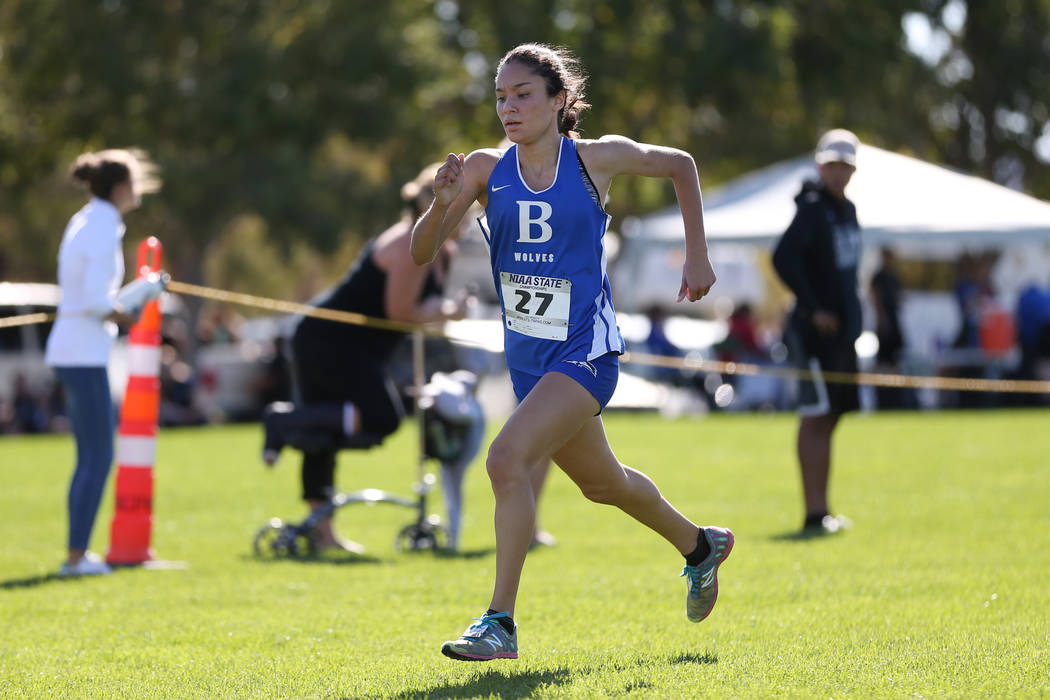 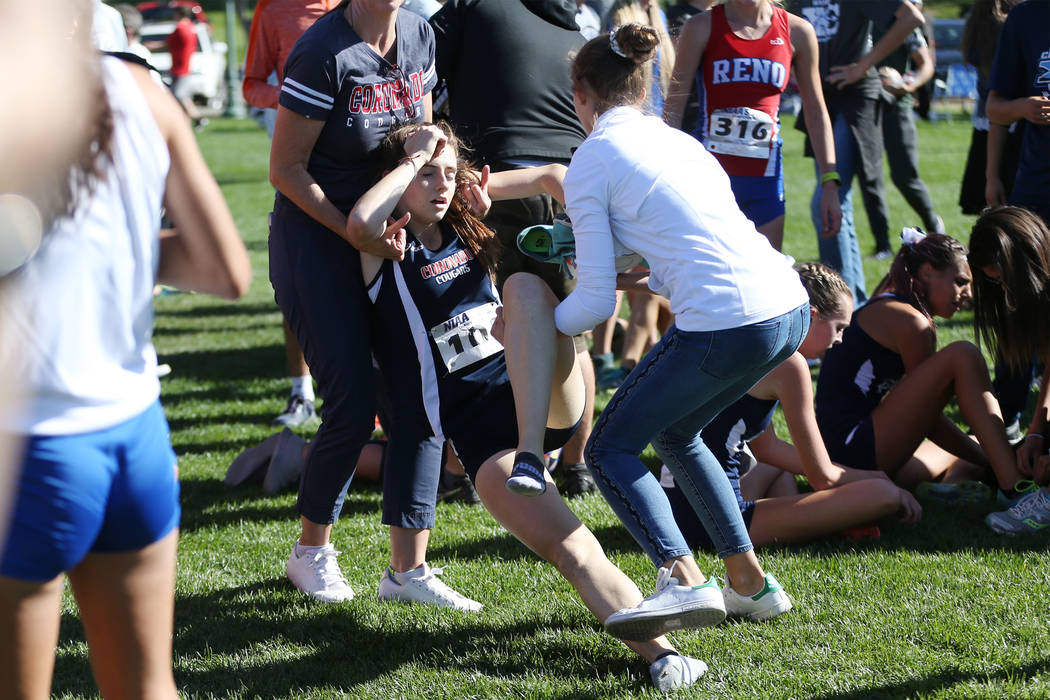 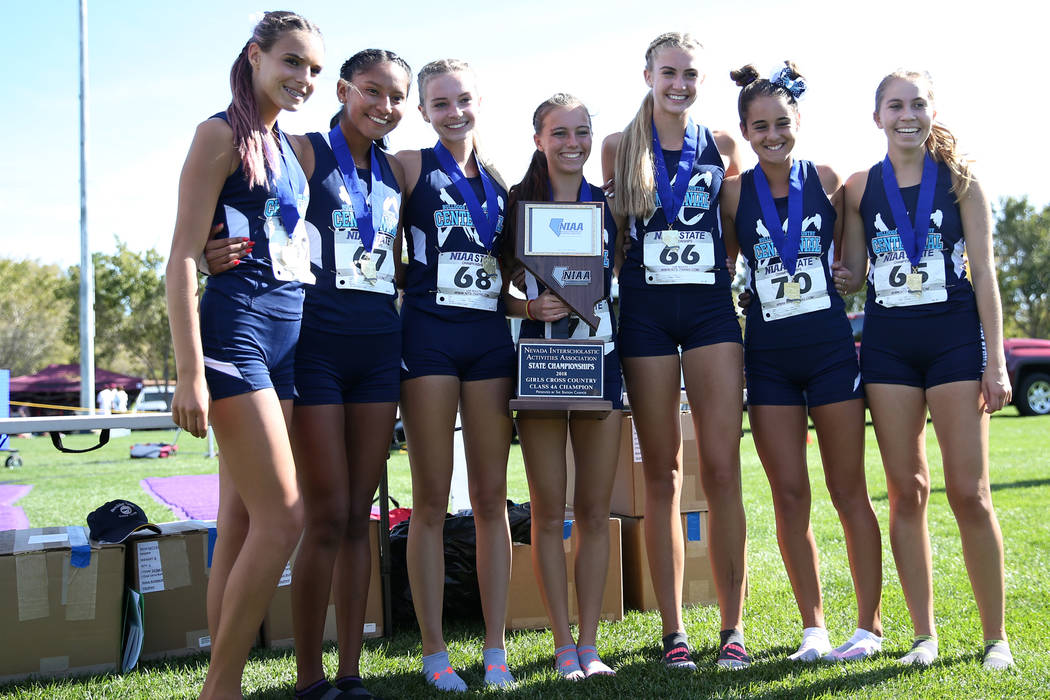 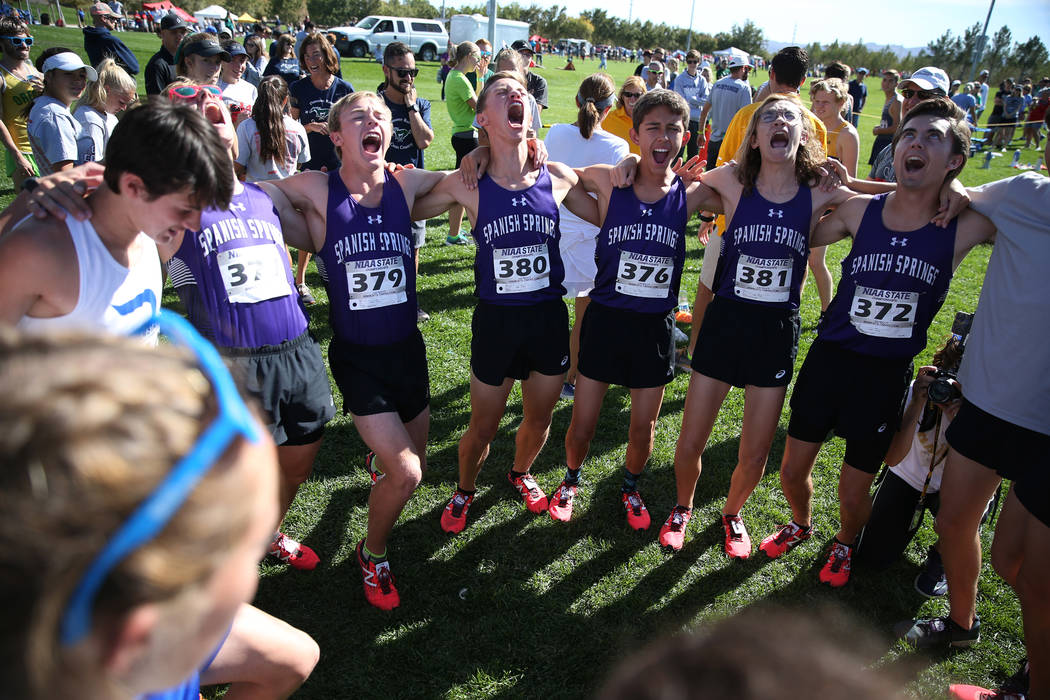 Runners from Spanish Springs High School in Washoe County yell a chant as they get ready to compete during the NIAA 4A Boys Cross Country State Championship at the Veteran’s Memorial Park in Boulder City, Saturday, Nov. 3, 2018. Erik Verduzco Las Vegas Review-Journal @Erik_Verduzco

A year ago, Jazmin Felix finished second in the Class 3A state cross country meet.

Then, Desert Pines took a step up to 4A. Felix then took one big step of her own up the standings – to first place in the 4A girls race at Veterans’ Memorial Park in Boulder City on Saturday.

The junior pulled away from the field shortly after the 2-mile mark and won in 19 minutes, 28.6 seconds over the 3.1-mile course.

Ironically enough, Felix spent much of the race thinking that someone was ahead of her. So when she crossed the finish line, there was no celebration but a flop onto the ground. Eventually, her coach came up and told her she won.

“When I run, I actually don’t think about the race so much,” Felix said. “I just basically get caught up in the running. You know, ‘just run you.’ That actually works out pretty well.”

As a team, Centennial captured the school’s fourth state title in the last five years. Josephine Ruggieri was the top Bulldog, placing fourth in 19:57.3. Centennial placed four runners in the top 20, and no other school had more than two in the top 20.

“I thought I could get top 15, but I just felt really good today,” Ruggieri said. “That is the thing about our team. Several of us can be the top runner on a given day.”

Southern runners went out quickly, with many tucked away into the lead group throughout the first mile. By the end of the opening mile, Felix had worked her way toward the front, leading a group which included Bishop Gorman’s Emilia Puskas, Basic’s Raquel Chavez, and Sierra Vista’s Sarriah Brown.

Felix eventually started to pick up the pace and began to drop runners, eventually leaving Puskas heading up the sandy uphill section at the start of the final mile. She had a big lead of over 30 meters heading down the sidewalk leading to the final 600 meters.

That was more than enough to survive a surge from Reno sophomore Penelope Smerdon, who finished second in 19:43.8.

“I have to give a lot of credit to the support I’ve gotten this year,” Felix said. “Also, the competition was so strong at 4A in the South this year. It really forced me to get a lot better.”

Chavez, the Basic senior, had battled final-mile issues earlier in the year. She had enough to finish third in 19:54.8.

“It was a different strategy to just hang back from leaders and then go at my own place,” Chavez said. “It was a good race and I was happy with how it turned out.”

South Tahoe junior Carissa Buchholz won the 3A individual title in 19:01.9, the fastest time of the day regardless of class. The junior led early followed by Spring Creek’s Riley Lusk and then the Moapa Valley pair of senior Shelby Olson and freshman Emma Humes.

Buchholz stretched her lead further out and over the final two miles and won going away. Lusk was second in 19:50.9, and Spring Creek teammate Kendra Lusk (20:21.9) took third to help Spring Creek win the team title.

North Tahoe runners went out to set the pace early. Sierra Lutheran’s Emily McNeely, who was edged out by North Tahoe’s Jillian Ferre at last week’s Northern Region race, broke away going up the sandy hill of the Veterans Park course a second time. The senior went on to win in 20:48.7, followed by Ferre (21:06.7).