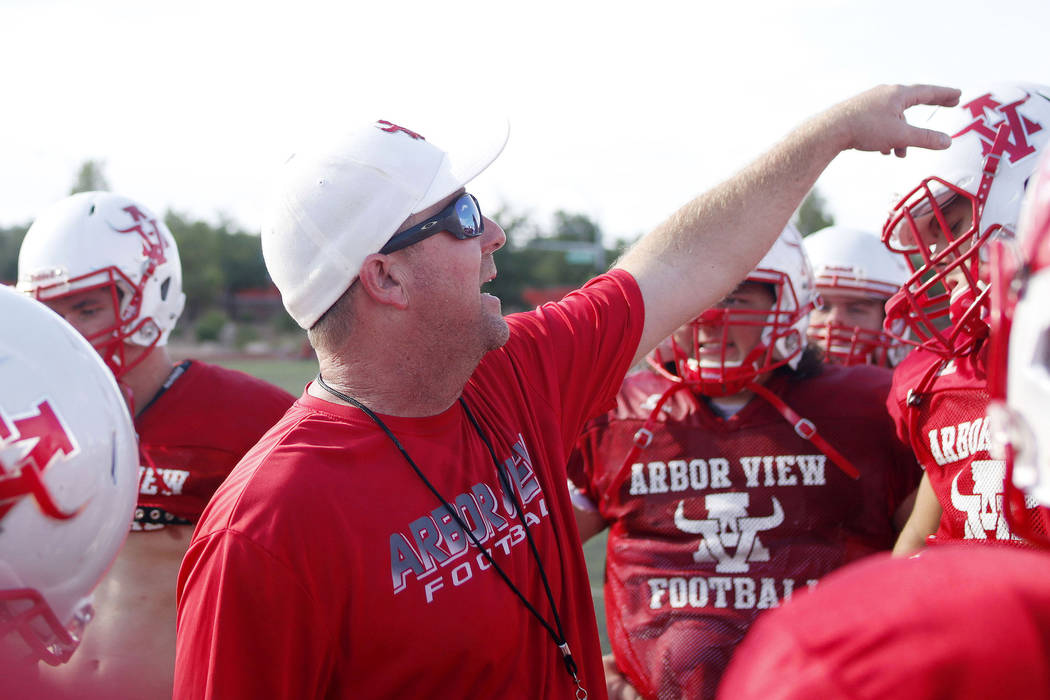 An intense rivalry. A contrast of styles. Overtime.

Friday night’s game between Arbor View and Legacy — the annual Battle of the Bulls game — had it all.

The Aggies finally prevailed 38-32 by scoring on their OT drive, then stopping the potent Longhorns’ passing attack on fourth down.

It also was wild after the game in that the winning coach, Matt Gerber, called it “ugly.” The losing coach, John Isola, lauded it as the game of the year.

Both teams put on a full display of what they do best.

All of Arbor View’s 354 yards came on the ground from its double-wing offense. Daniel Mitchell and Jaedyn Jackson both eclipsed 100 yards rushing, but it was two touchdowns from quarterback Keoka Charmichael — 2-yard runs in the final minute of regulation and in overtime — that proved to be the difference.

For Legacy, which hasn’t defeated Arbor View since 2013, Evan Oleas continued to show he’s one of the most dangerous dual-threat quarterbacks in the valley with 401 total yards. He found his favorite target, Aaron Holloway, six times for 157 yards and two touchdowns.

After Charmichael’s overtime score, the Longhorns faced a fourth down. Arbor View brought a blitzer off both sides, and Trent Whalen’s pressure forced an incompletion by Oleas.

One thing is for sure: Arbor View knows how to put on a show for its home fans. The Aggies’ other home game was a 35-34 win over American Fork (Utah), a game they trailed 21-0.

Closing out wins is one of the hardest things for down-trodden programs to learn.

But Clark has done it three straight weeks — the first three-game winning streak at the school in at least 15 years — and the Chargers are doing it with defense.

After Clark took a 27-20 lead over Chaparral in the fourth quarter Friday, the Cowboys had two more chances. The first one ended in a punt after the Chargers got a third-down sack. The last was an interception by D’on Williams in the final seconds of the 27-20 victory.

The offense did its job, too, by picking up two first downs, burning four minutes off the clock and getting into Chaparral territory.

Clark begins Southwest League play next week, and its first three opponents are Spring Valley, Sierra Vista and Durango, who have a combined record of 2-8.

There are three Southwest League games that could set the tone for the season.

Along with Clark vs. Spring Valley, Durango heads to Silverado and Desert Oasis goes to Sierra Vista. Bishop Gorman gets the week off.

Gorman (3-1) is the easy favorite, but it’s anybody’s guess who will pick up the three remaining playoff bids.

Silverado (2-1) is young, but Aginae Cunningham gives the Skyhawks a big-time threat in the backfield.

Clark is 3-1 and gaining confidence.

Desert Oasis (2-1) has a balanced offense that could cause problems.

Spring Valley (1-1) is coming off a win in the Battle for the Banner game against Bonanza.

The game of the week, at least by records, is Thursday when Foothill travels to Palo Verde in a battle of 3-0 teams.

Both defenses have been stingy, but Foothill hopes to get quarterback Koy Riggin and the passing game going. Palo Verde wants to keep the ball away from the Falcons offense with its strong running game.