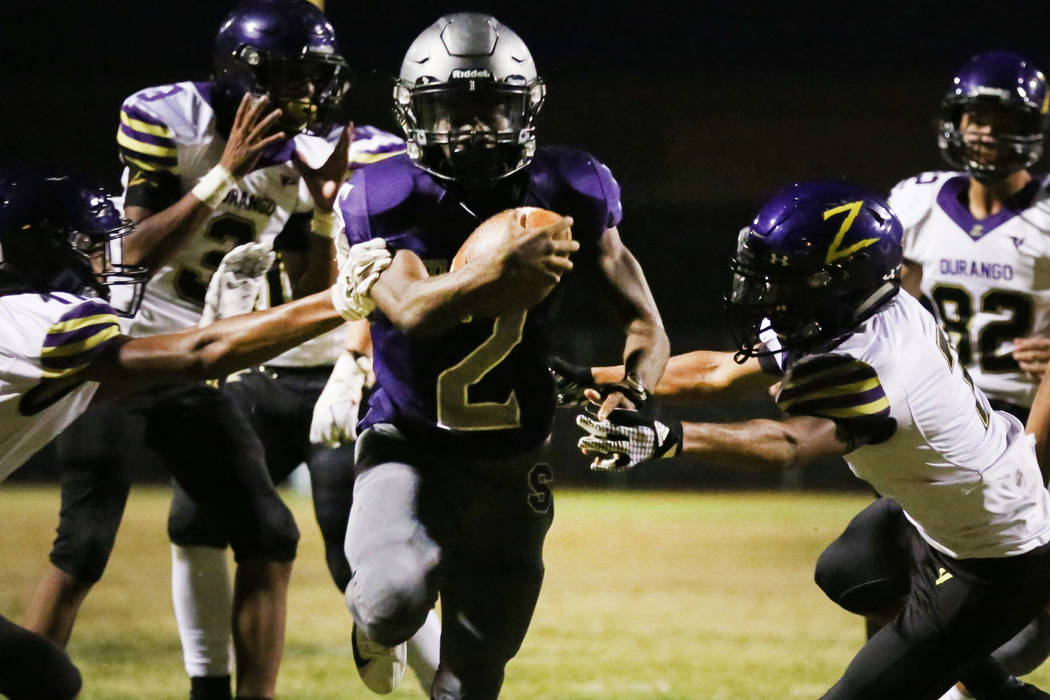 Silverado High's running back Aginae Cunningham (2) scrambles away from Durango High defense as he goes for a touchdown during the second quarter of their football game on Friday, Sept. 20, 2019, at Silverado High School in Las Vegas. Bizuayehu Tesfaye/Las Vegas Review-Journal @bizutesfaye<a></a>

Silverado has had a breakthrough season despite being a young team. The Skyhawks cruised to second place in the Southwest League. Their reward is hosting a Foothill bunch that won’t be happy to go on the road. The Falcons dropped three straight games to close the regular season, two by a point apiece. A stout Foothill defense will be tested by Aginae Cunningham and his valley-leading 1,724 rushing yards and 20 TDs.

These teams met on the same field early in the season, with Green Valley taking a 39-3 win. A lot has happened since then, and both teams have reasons to believe they’re better now. Green Valley’s offense has come alive in the past three weeks, while Durango quarterback Ryan Cabase has matured into the position. Cabase is the Trailblazers’ leading rusher, with 592 yards and eight TDs to go with 1,116 yards and 12 scores passing.

It’s been a storybook season for a Clark team that had won four games over the past three seasons. For the Chargers’ run to continue would take a monumental effort. Liberty has been the second-best program in the valley over the past decade. The Patriots started 0-5 against stiff out-of-state competition, but they rolled through the Southeast League by a combined total of 231-17 in five games.

It’s been four years since Coronado has reached the playoffs. The Cougars have a big-play threat at receiver in Andrew Montez, who has 888 receiving yards and 11 touchdowns. He averages 23.4 yards per catch. They will need everything they can get from Montez and more to have any chance to stay on the field with Gorman. The Gaels are gunning for their 11th straight state title. In their six Southwest League games, they outscored their opponents 368-6.

The winner of this game grabs at least a share of the Northwest League title and clinches a home first-round playoff game. If Cimarron-Memorial pulls an upset on Centennial, the winner will be the outright champion and No. 1 seed. Arbor View has won four straight since its league-opening loss 24-17 loss to Centennial. Palo Verde has rebounded from its 50-36 loss to Centennial with a 55-35 win over Faith Lutheran last week.