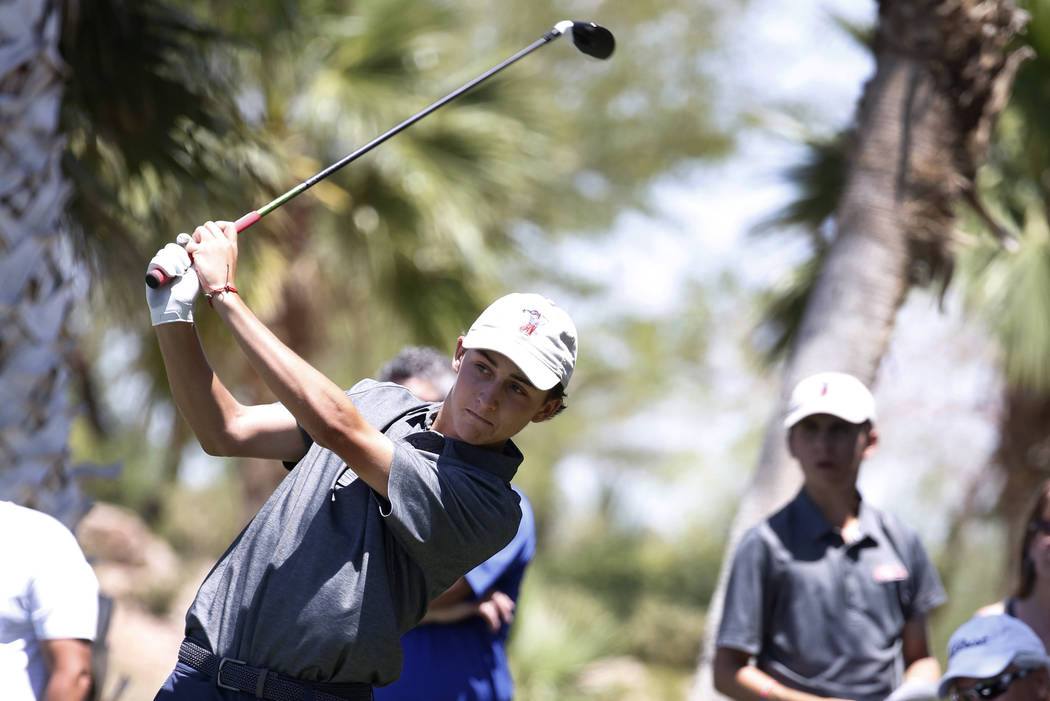 Coronado High’s Benjamin Sawaia hits his tee shot at Reflection Bay Golf Club on Monday, May 14, 2018, in Henderson. Sawaia aced the par-3 12th hole in the first round of the 2019 Class 4A state golf tournament. Bizuayehu Tesfaye/Las Vegas Review-Journal @bizutesfaye

Sarro and Galena’s Orlando Coons each shot a 1-under-par 71 and lead by one stroke over Coronado’s Benjamin Sawaia entering Tuesday’s final round.

Sarro and Sawaia helped the defending state champion Cougars take a two-stroke lead over Galena in the team competition.

Sarro had three birdies and two bogeys in a steady round.

“He was really solid,” said Coronado coach Joe Sawaia. “We really needed that round out of Michael. This is a tough course, and we played the back nine blind today.”

Benjamin Sawaia battled back after bogeying three of his first five holes. He aced the 168-yard 12th hole and eagled the par-5 13th as part of a 2-under back nine.

“That was his first,” Joe Sawaia said of his son’s ace. “It’s kind of cool to get that in a state tournament.”

Coronado’s Joey Dotta and Galena’s Ian Gilligan are tied for fourth at 73. Brett Sawaia and Brett Sodetz each shot 75 for Coronado and are among seven golfers tied for seventh.

“I like the position we’re in,” Joe Sawaia said. “Our guys handled today really well. The greens are unforgiving, and the three-putts can happen really quickly. If we can clean that up tomorrow, we’ll be fine.”

Blake Schaper shot a 3-under 69 at Genoa Lakes Golf Club to grab a share of the individual lead and help Boulder City lead the team competition at the midway point of the Class 3A state tournament in Genoa.

Dustin Landerman and Kyle Carducci each added a 79 for the Eagles and are among three golfers tied for sixth place.

Koby Lindberg led Pahrump with an 81.

Lake Mead’s Marcus Dolinar shot a 3-over 75 and leads by five strokes at the halfway point of the Class 2A state tournament at Toana Vista Golf Course in West Wendover.

North Tahoe’s Murphy Scott is second after shooting 80, and Whittell’s Patrick Smorra is third at 83. The Meadows’ Justin Finseth shot 84 and is fourth.

Whittell has an 11-stroke lead in team competition. The Warriors shot 364 on Monday.