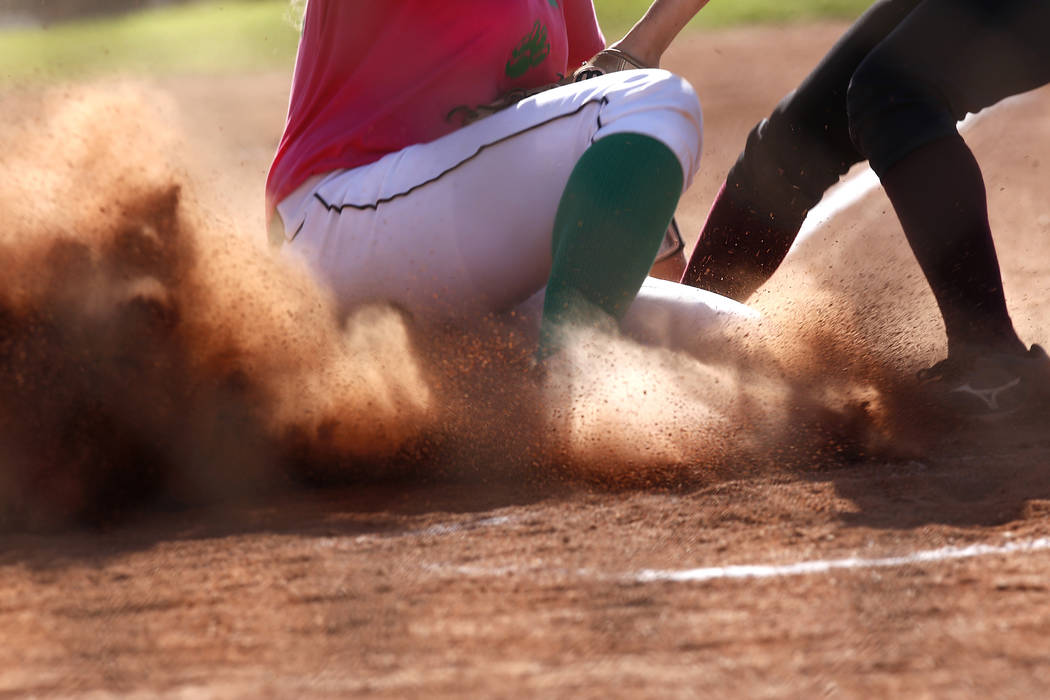 Leah Becker was 3-for-3 with a double, a home run, two runs and three RBIs to lead Foothill’s softball team to an 8-2 home win over Basic on Wednesday.

Becker also went the distance to get the win. She scattered eight hits, struck out five and walked one.

Kylie Becker was 3-for-3 with two runs and an RBI, and Makenzie Andrews went 3-for-4 for Foothill, which had 15 hits. Skylar Glaude added two hits and three RBIs for the Falcons.

Basic’s Lauren Koshak went 2-for-3 with a double and a run.

Silverado 11, Las Vegas 3 — At Silverado, Jessica Boothe was 3-for-4 with a triple and four RBIs as the Skyhawks beat the Wildcats to clinch a berth in the Sunrise Region tournament.

Katie Carder was 2-for-3 with three runs and went the distance to pick up the victory.

Las Vegas’ Melissa Fabian was 2-for-4 with a home run and two RBIs, and Kaitlyn Horstdaniel added a solo homer for the Wildcats.

Bishop Gorman 3, Spring Valley 2 — At Gorman, Katelyn Hunter went 3-for-4 and belted a walk-off solo home run with one out in the bottom of the seventh inning to lift the Gaels over the Grizzlies.

Darian Pancirov had two hits and threw a four-hitter with six strikeouts to earn the win.

Coronado 9, Liberty 6 — At Coronado, Tatum Spangler tossed a complete game, allowing two hits and one earned run with 14 strikeouts, as the Cougars topped the Patriots.

Spangler also went 3-for-5 with a triple, three runs and three RBIs.

Madison Stephens went 3-for-4 with a double and a run, and Cierra Sawyer supplied two hits and two RBIs for Coronado.

Shelby Carvalho provided a single, a triple, and a run to pace Liberty.

Green Valley 17, Rancho 3 — At Rancho, Olivia McClain doubled twice and drove in a run, and Hannah Mearideth went 2-for-4 with a double and an RBI as the Gators defeated the Rams in five innings.

Cristina De Los Angeles supplied two hits, an RBI and a run, and Cinthia Garcia had a run-scoring triple and scored for Green Valley, which took advantage of 11 errors by Rancho.

Lorena De La Torre had two doubles and an RBI, and teammate Liliana Gutierrez had two hits for Rancho.

Shadow Ridge 13, Faith Lutheran 2 — At Shadow Ridge, Caitlin Covington went 2-for-2 with two doubles, five RBIs and two runs to help the Mustangs to the five-inning win over the Crusaders.

Mia Voges was 2-for-4 with a homer and four RBIs, and Shea Clements went 3-for-4 with two runs and an RBI for Shadow Ridge.

Faith Lutheran’s Clara Heislen was 2-for-3 with a double, a run and an RBI, and Kelsey Howryla went 2-for-2 for the Crusaders.

Bennett-Jordan struck out nine with no walks.

Ashley Wishard was 2-for-5 with a double and five RBIs, and Jordan Moorhead went 3-for-4 with two runs and an RBI for Boulder City.

Lily Osman was 2-for-3 with a solo home run, and Jerra Hinson, Summer Coyle and Ryann Reese each added two hits for the Eagles.

Calee Clem added a double for Virgin Valley, which led 5-1 after the fifth. Price pitched a four-hitter.

Lisa Laolagi had a double for Chaparral, which scored three times in the bottom of the seventh, but couldn’t complete the comeback.

Valley 16, Canyon Springs 6 — At Valley, Gabriella Morales went 3-for-3 with a home run, three RBIs and four runs to help power the Vikings past the Pioneers in five innings.

Heather Robinson was 3-for-3 with two runs and two RBIs, and Amanda Borce doubled, drove in a run and scored twice for Valley, which led 12-0 after three innings.

Joseline Alvarez doubled, scored twice and had an RBI for Canyon Springs.

Cheyenne 15, Desert Pines 0 — At Cheyenne, Hannah Tennant fired a one-hit shutout and went 3-for-3 with two doubles and two RBIs, lifting the Desert Shields to a three inning rout of the Jaguars.

Madelynn Kennedy was 2-for-3 with a double and three RBIs, and Jessica Mercado and Victoria Rosales each hit a double for Cheyenne, which led 14-0 after two innings.

Sierra Vista 16, Pahrump Valley 9 — At Sierra Vista, Jazmyn Martinez was 2-for-3 with two runs and five RBIs to help the Mountain Lions top the Trojans.

Ryan Watkins was 2-for-5 with a double and four RBIs, and Tyerra Kaaialii went 2-for-2 with two doubles, three RBIs and two runs for Sierra Vista.

Daelynn Hilton was 3-for-3 with two runs and an RBI, and Jessica Schneider went 2-for-4 with a triple and three runs for the Mountain Lions.

Moapa Valley 16, Tech 0 — At Overton, Lainey Cornwall doubled twice, scored three runs and drove in three runs to lead the Pirates to the three-inning win over the Roadrunners.