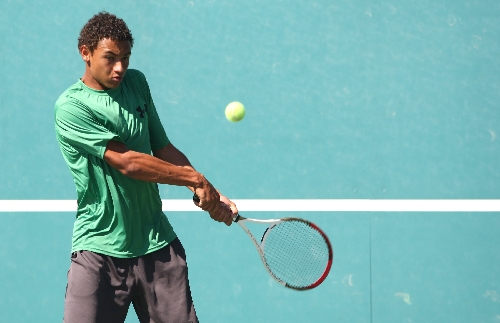 On paper, Palo Verde’s boys tennis match against Centennial on Saturday should have been close.

The Bulldogs have become the Panthers’ closest rival in Southern Nevada and twice last season gave Palo Verde all it could handle before losing 10-8 in the regular season and 11-7 in the Sunset Region final.

And Centennial came into Saturday’s matchup undefeated and hungry for its first region crown and a measure of revenge.

It didn’t take long for the Panthers to wad up the paper and throw it away.

Palo Verde (14-0) blitzed to a 5-1 first-round lead and never looked back en route to a deceptively easy 13-5 win in the Sunset Region championship at Darling Tennis Center. The Panthers advance to the Division I state tournament, which begins Oct. 18 in Reno.

“The matchups were in our favor today,” said Palo Verde coach Zach Brandt, whose team won its fourth straight region title. “Jumping out 5-1 in the first round was a momentum builder for sure. You always hope for 4-2, but to get 5-1 was huge. I didn’t think we would get that.”

Trevor Johnson, Ozzy Abraham and Rhett Bossung dropped a combined one game in the first round of singles play to get the Panthers off to a fast start.

“For those guys, tennis is their life,” Brandt said. “They have so much confidence in themselves. They are really in their comfort zone in singles.”

Johnson and Abraham each posted a 6-0 win in the second round to help Palo Verde extend the lead to 9-3.

“We just came out and fought,” Abraham said. “We needed to bring it in the beginning. If we didn’t go hard in the first round, we might have struggled because we knew they would come and get us.”

Bossung’s quick 6-0 win in the third round gave the Panthers the clinching point with five matches still on court.

“Our guys were definitely pumped up and focused,” Brandt said.

Lucas Lee and Allen Fleegle were 3-0 in doubles to pace Centennial (13-1). Max Novak was 2-1 in singles for the Bulldogs.