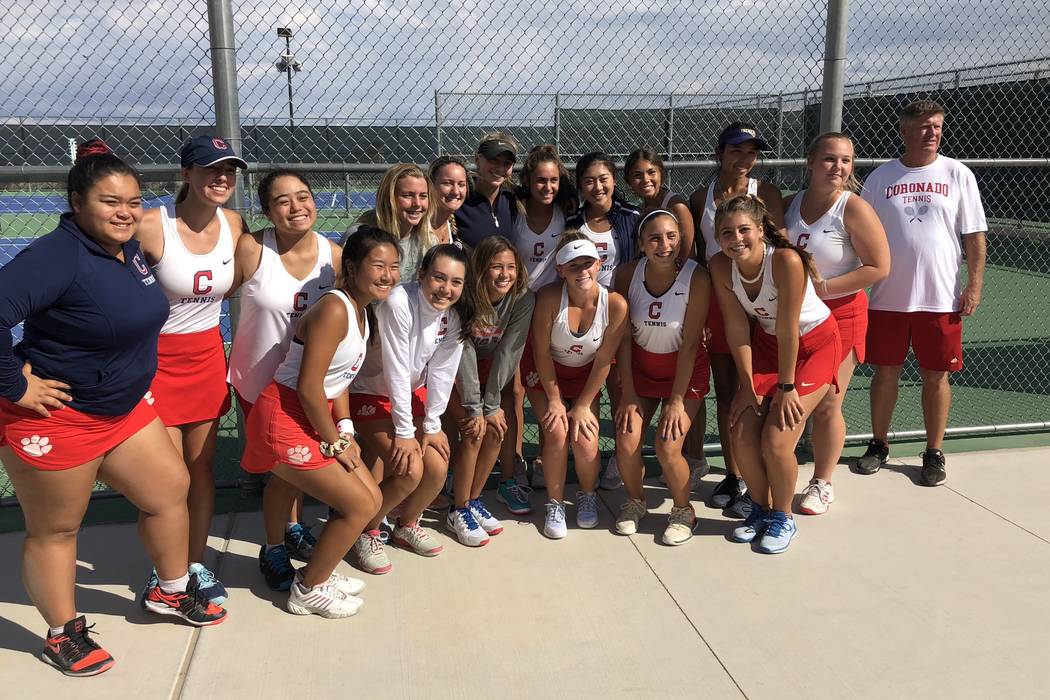 Coronado girls tennis players deliberated about where to pose for a celebratory photograph after beating Palo Verde for the first Southern Nevada team championship on Saturday afternoon.

They eventually settled in front of a fence outside one of the tennis courts.

Another win calls for another Kodak moment, after all.

The defending state champion Cougars (16-0) rolled to a 13-5 victory over the previously unbeaten Panthers (15-1) at Bishop Gorman to extend their winning streak to 31 and clinch a bye in the Class 4A state tournament.

Coronado’s starters rolled through the first two six-point rounds and cemented the win relatively early. Maddie Smith, Blythe Buntrock and Kennedy Buntrock each went 3-0 in singles, and the pairing of Ava Nhaisi and Sidra Wohlwend was 2-0 in doubles.

“Coach has done a really good job making us all do well in the tournament. He prepared us well,” said Smith, who plays No. 1 singles. “We have a good team chemistry.”

Kaya Richardson and Roxanne Okano were 3-0 in doubles for Palo Verde, which begins state tournament play Oct. 15 against Bishop Gorman. The semifinals and finals are in Reno this year, and Willingham and company are excited for the chance to defend their title.

“I think it’s even neat that we have all these new girls that are excited about this being their first one,” he said. “And you have the ones that are excited to defend, it just magnifies how much they enjoy it.”

Both teams advance to the state tournament.

Palo Verde led 8-7 on Friday, but the match was suspended because of darkness.

Arianna VanHouweling was 3-0 in singles for Faith Lutheran.