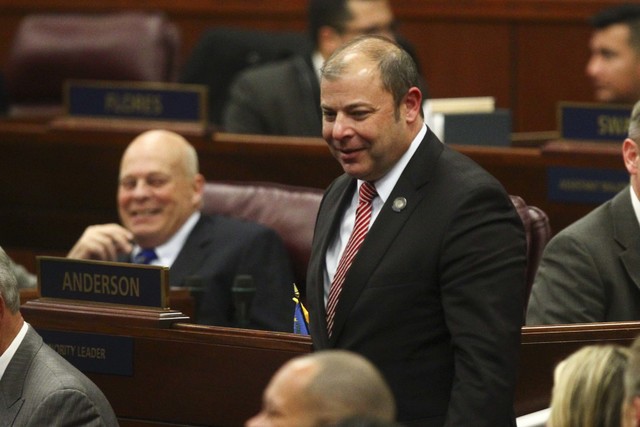 CARSON CITY — Nevada Assembly Minority Leader Paul Anderson said Tuesday he and his caucus will vote against the state budget if it does not include funding for education savings accounts.

Speaking with reporters in his office, Anderson acknowledged Democrats opposed to the school voucher-type program can pass the budget without Republican support. Passage of the budget requires a simple majority vote, and Democrats hold a 27-15 advantage.

But they are one vote short of the 28 needed to override a potential veto from Republican Gov. Brian Sandoval, who included $60 million in his two-year spending plan to implement the ESA program approved in 2015 when the GOP controlled both chambers of the Legislature.

Anderson, R-Las Vegas, said he is confident the governor “has our back” and will use either the threat or execution of a veto to fund ESAs.

A bill sponsored by Sen. Scott Hammond, R-Las Vegas, to implement ESAs died in the Senate without a hearing. An identical bill introduced by the governor is pending in the Senate Finance Committee, though no hearing has been scheduled.

Anderson said ESAs and about 10-15 bills will be part of the end game as leaders in both the Senate and Assembly start looking towards sine die. The 120-day session must end by midnight June 5.

On the budget, he welcomed revenue projections issued Monday by the Economic Forum, which forecast the state will collect $96 million more in the upcoming two-year budget cycle than it predicted in December.

The better-than-expected tax revenues also means $44 million more for the existing fiscal year that ends June 30. But most of that money will go toward filling unforeseen shortfalls due to caseload growth in such things as inmate medical care and Medicaid.

Anderson said the state’s main public school fund, the Distributive School Account, also faces a shortfall this year because of higher than anticipated enrollment growth. He estimated that shortfall could total $37 million, though he stressed the amount is preliminary and will likely be revised.