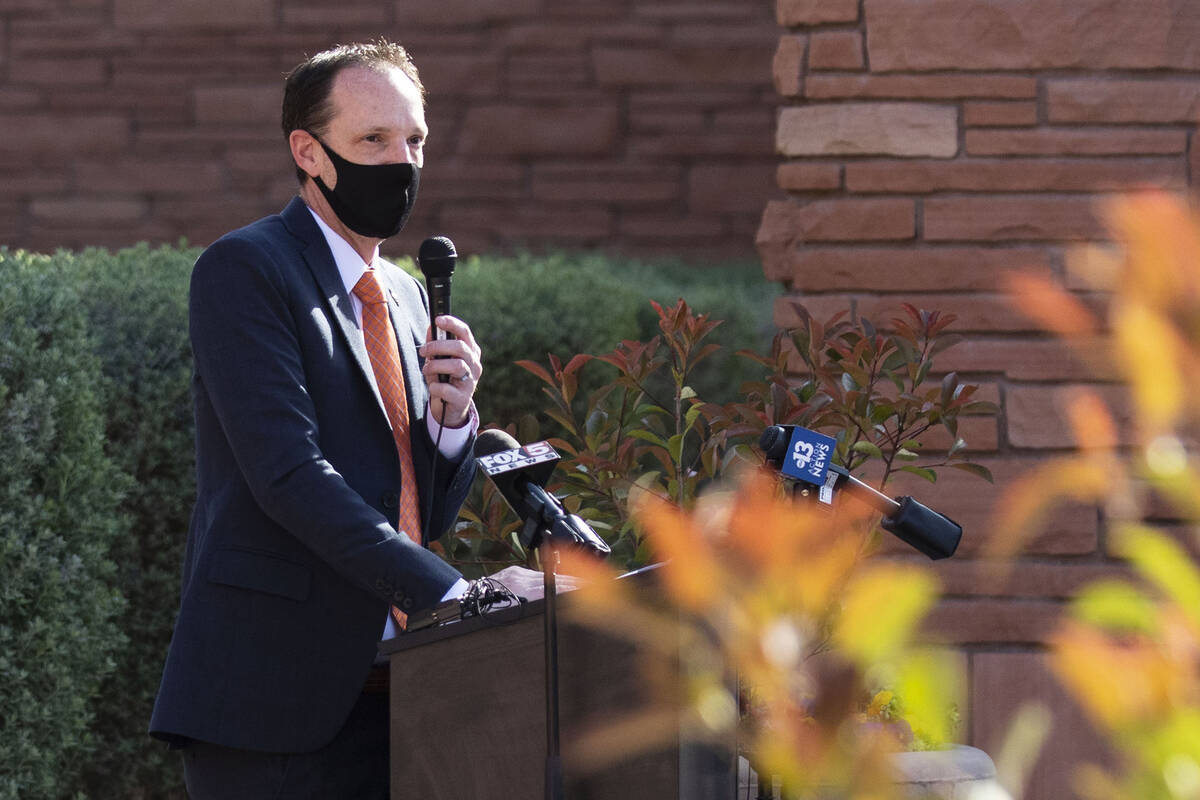 Commissioner Justin Jones speaks during a news conference outside of the Clark County Government Center building in Las Vegas, Tuesday, April 2021, to urge the county's adoption of a resolution to conserve 30 percent of Nevada's lands and waters by the year 2030. (Bizuayehu Tesfaye/Las Vegas Review-Journal) @bizutesfaye

Clark County Commissioner Justin Jones has been accused of deleting text messages he sent and received prior to a key vote in 2019 that effectively delayed a controversial proposed housing project overlooking Red Rock Canyon.

The texts were sought as evidence by lawyers for developer Gypsum Resources LLC, as part of the company’s federal Chapter 11 bankruptcy proceedings and ongoing lawsuit against the county and commissioners, whom the developer has blamed for project delays over the years that it said fueled much of its financial predicament.

Gypsum Resources’s lawyers have been particularly interested in communications that Jones had with others prior to the April 2019 unanimous vote. But a third-party audit revealed that related text messages were missing from Jones’s personal cellphone, according to a recent legal filing.

The accusations that Jones destroyed evidence follow the developer’s claim last year that Jones — one of the proposed project’s biggest opponents — orchestrated an arrangement in late 2018 tantamount to a “quid pro quo” with Gov. Steve Sisolak, then a commissioner, to impede the development.

The upshot of the most recent allegations, as spelled out by the developer’s lawyers in court filings, is that Jones “destroyed public records in an effort to conceal his improprieties relative to Gypsum.”

Public records in Nevada include even communications on private devices if the subject matter is related to providing public services.

In recent court filings, the developer’s legal counsel claimed Jones tried to conceal the destruction of the messages and that the county took few steps to preserve other evidence. Attorneys for Jones and the county dismissed the allegations as a far-reaching attempt by Gypsum Resources to cover holes in its case and divert attention from self-inflicted failures.

“Gypsum and its lawyers have engaged in a relentless smear campaign against me since the day that I and my Commission colleagues unanimously voted to hold Gypsum to its own commitments regarding its ill-conceived plan to develop thousands of houses in Red Rock Canyon,” Jones said in a statement to the Review-Journal.

“This latest legal filing is just more of the same vindictive personal attacks designed to bolster its efforts to bankrupt the county,” he added.

A court decision is pending on Gypsum Resources’s request to convene a hearing to impose sanctions on Jones and the county for alleged destruction of evidence. Jones said he was “confident that the court will see through Gypsum’s smokescreen and deny the motion.”

Jones, a lawyer and former state senator, represented the environmental nonprofit Save Red Rock in late 2018 as it fought the proposed housing project on the site of Blue Diamond Hill, a working gypsum mine. At the time, Jones was a candidate for the county commission and Sisolak was a commissioner running for governor.

Last year, Gypsum Resources’s lawyers highlighted a pre-election email in October 2018 from Jones to a Sisolak campaign aide, which suggested that Sisolak could receive public support from environmental advocates — and Jones could dismiss Save Red Rock’s lawsuit against the county — if Sisolak opposed a vote on the project.

Days later, Sisolak announced his support for delaying any vote until after the election, when two new commissioners would be seated — one of whom wound up being Jones. The stance garnered Sisolak public praise from the Nevada Conservation League and, two weeks later, Save Red Rock dropped its suit against the county and Gypsum Resources.

Jones and Sisolak’s campaign denied any wrongdoing in June, shortly after the email was publicized in court.

But the matter resurfaced in a filing last month by Gypsum Resources’s lawyers. They linked the sequence of events to a 6-0 decision by county lawmakers on April 17, 2019 — with Jones newly seated on the commission — to deny Gypsum Resources’s request to waive a condition needed to move forward with a preliminary plan to construct 3,000 homes.

That condition — that Gypsum Resources first receive Bureau of Land Management approval to build a roadway leading to the site — stemmed from a 2011 concept plan the county had approved.

Lawyers recently sought more information from Jones, who is a material witness to their claims against the county and the commission, although he is not a named party in the lawsuit.

The suit was filed a month after the April 2019 vote. It alleges, among other things, a government taking, bias and breach of contract in connection to a settlement agreement between the two sides from more than a decade ago that resulted in certain conditions for the proposed project. The county later filed a counter suit.

Jones was deposed last year and subpoenaed to produce all texts “relevant” to the case, resulting in six messages from after the April 2019 vote, according to a court filing on Feb. 7.

In a court filing nearly two weeks later, lawyers for Jones said it was clear that Jones had produced all of the texts that were reasonably accessible to him.

But the developer’s lawyers said they had received text messages from others with whom Jones interacted that showed he received and sent texts prior to the vote. In one late October 2018 text exchange between Jones and Andy Maggi, at the time the head of the Nevada Conservation League, Jones remarked: “Well, I’m doing my part. If Sisolak doesn’t want to play, then it’s going to blow up in his face tomorrow,” according to the Feb. 7 court filing.

In response to a request from Gypsum Resources’s lawyers, the bankruptcy court ordered a forensic imaging of Jones’ cell phone and iCloud accounts last year.

The third-party audit found that all Jones’s text messages leading up to the April 2019 vote were gone and unrecoverable, according to the court filing. The earliest message on Jones’s device was from roughly six hours after the commission’s unanimous decision to deny the developer’s waiver request.

In a court filing on Feb. 22, Jones’s lawyers said that Gypsum Resources’s request for electronic communications dating back a decade was not made until May 2021, more than two years after the vote, and that he had produced “a large number” of documents from multiple email and social media accounts, as well as multiple devices.

His lawyers did not dispute the audit’s findings, however, that the earliest text message on his phone was from April 17, 2019. They did not provide any explanation, either, but they said that Jones cannot legally face sanctions because he is not a party in the lawsuit.

The county argued in a separate filing on Feb. 22 that any information that could have been culled from Jones’s texts was irrelevant to the claims argued by Gypsum Resources and could not be used in court, anyway.

The county also said that it did not know Gypsum Resources would be suing, at the time of the April 2019 vote, nor did it know of any messages on Jones’s phone, meaning it did not fail in its duty to preserve evidence. And it said Gypsum Resources failed to safeguard related information from its own representatives.

“But the destruction of evidence, political maneuvering, and the use of an over-hyped public issue as a political tool to catapult an election is inconceivable,” she said in a statement.

Mayo-DeRiso was previously involved in Save Red Rock’s campaign to preserve the area and beat back the development, but she said she switched support after learning of the political undercurrent in the project’s opposition. Notably, she is also assisting the campaign of county Planning Commissioner Jenna Waltho, who is running against Jones for county commissioner.

The commission unanimously approved a slimmed-down version of the developer’s plans in August, authorizing the construction of 280 luxury homes across 563 acres.

An earlier version of this story misstated Andy Maggi’s position with the Nevada Conservation League.