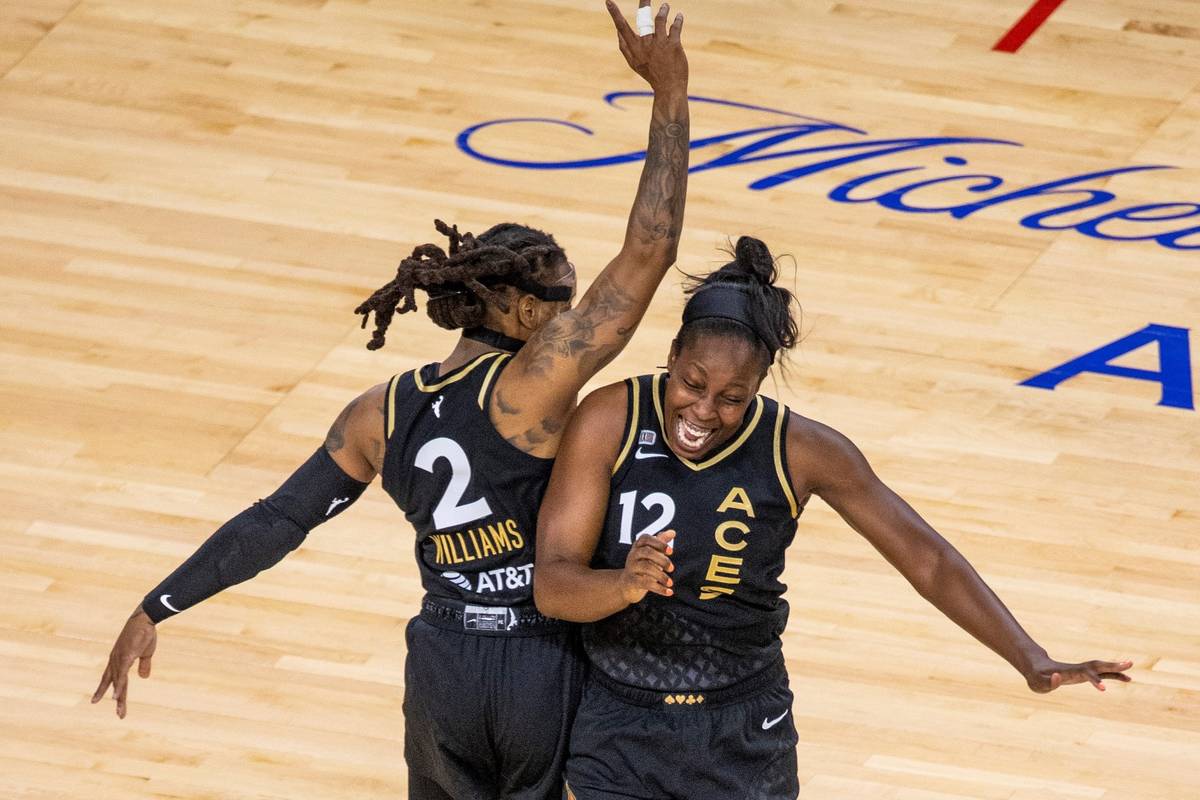 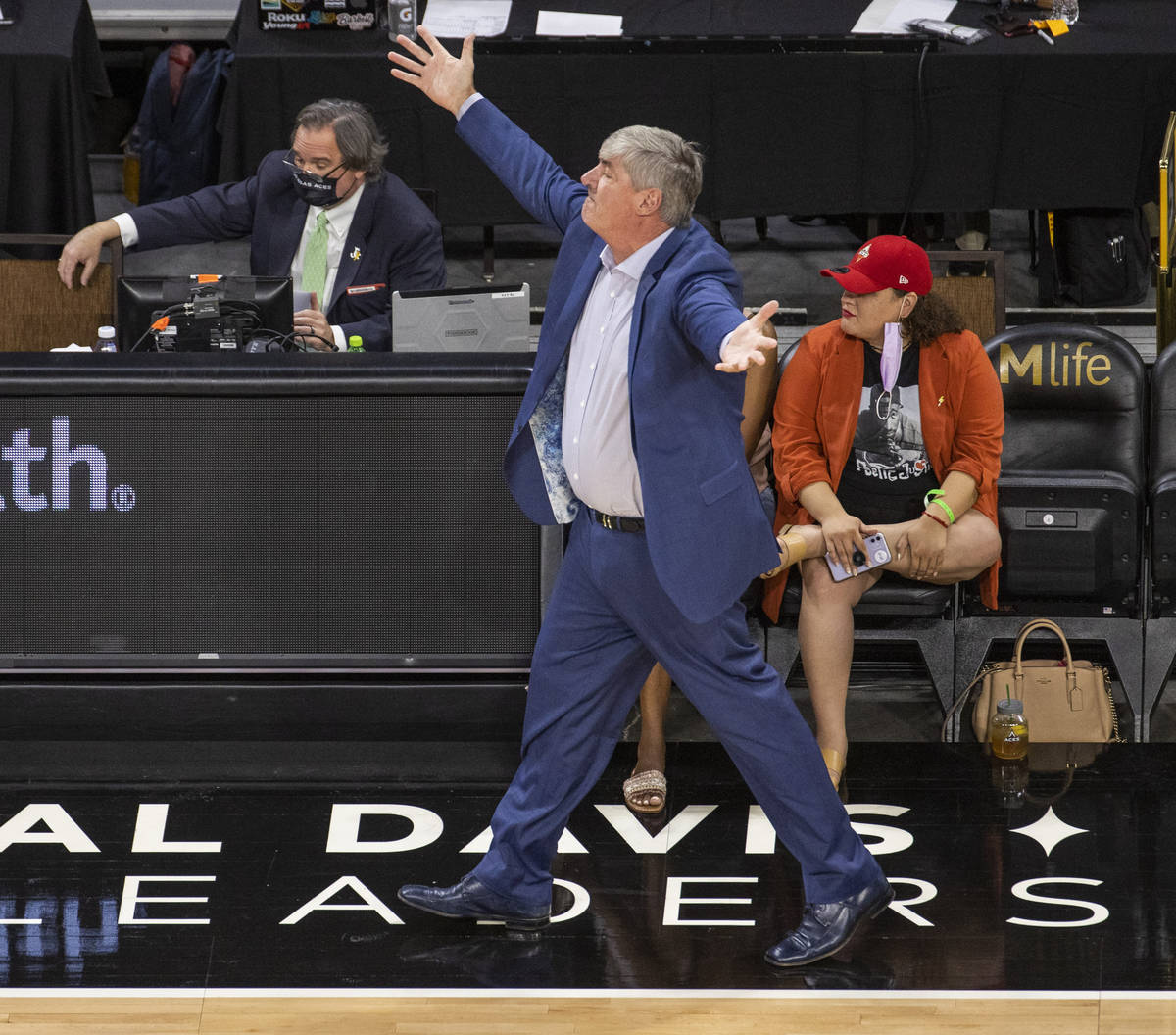 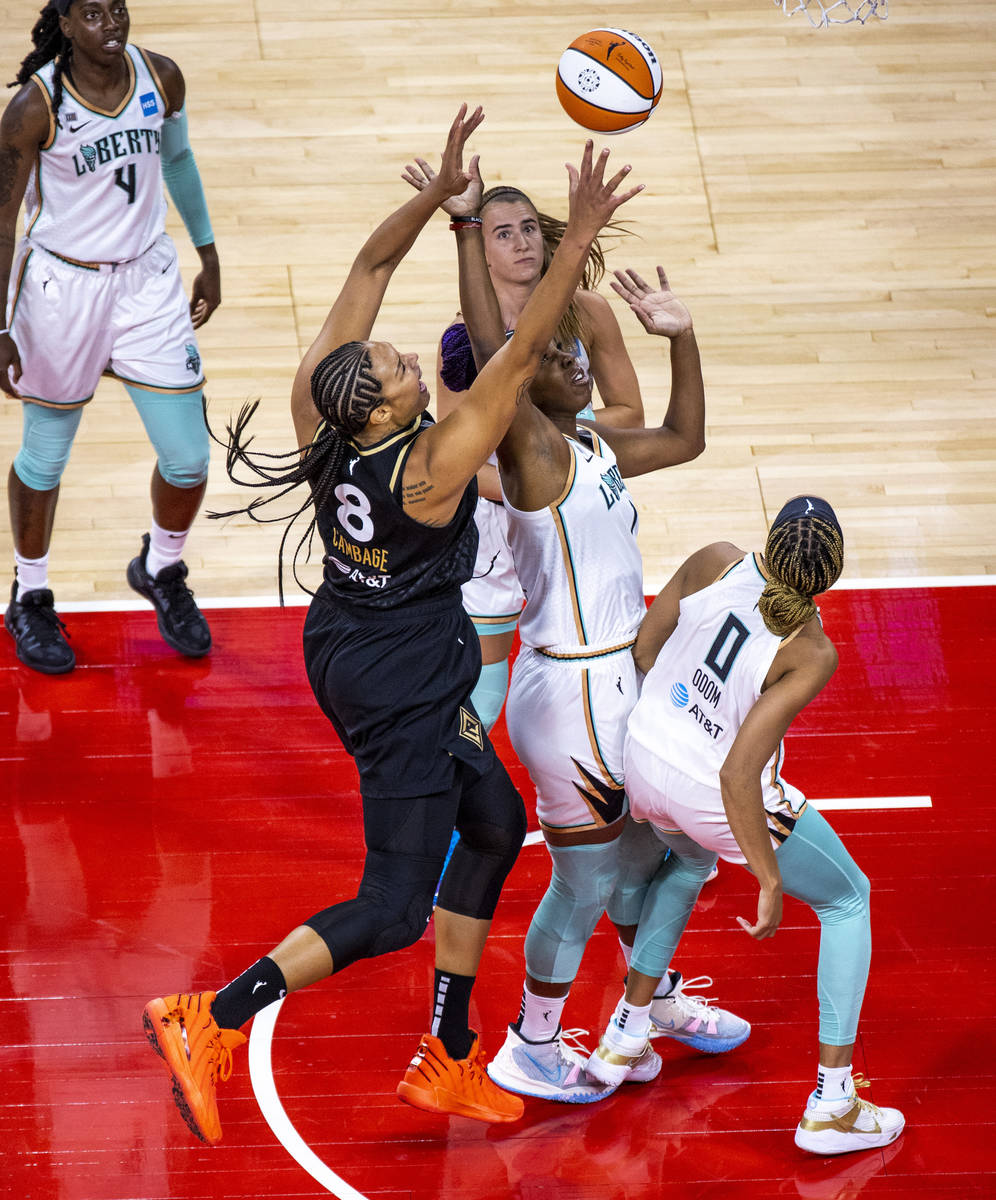 Las Vegas Aces center Liz Cambage (8) gets off a second shot for a score over New York Liberty forward Reshanda Gray (1) and teammates during the first quarter of a WNBA basketball at the Michelob Ultra Arena on Thursday, June 17, 2021, in Las Vegas. (L.E. Baskow/Las Vegas Review-Journal) @Left_Eye_Images 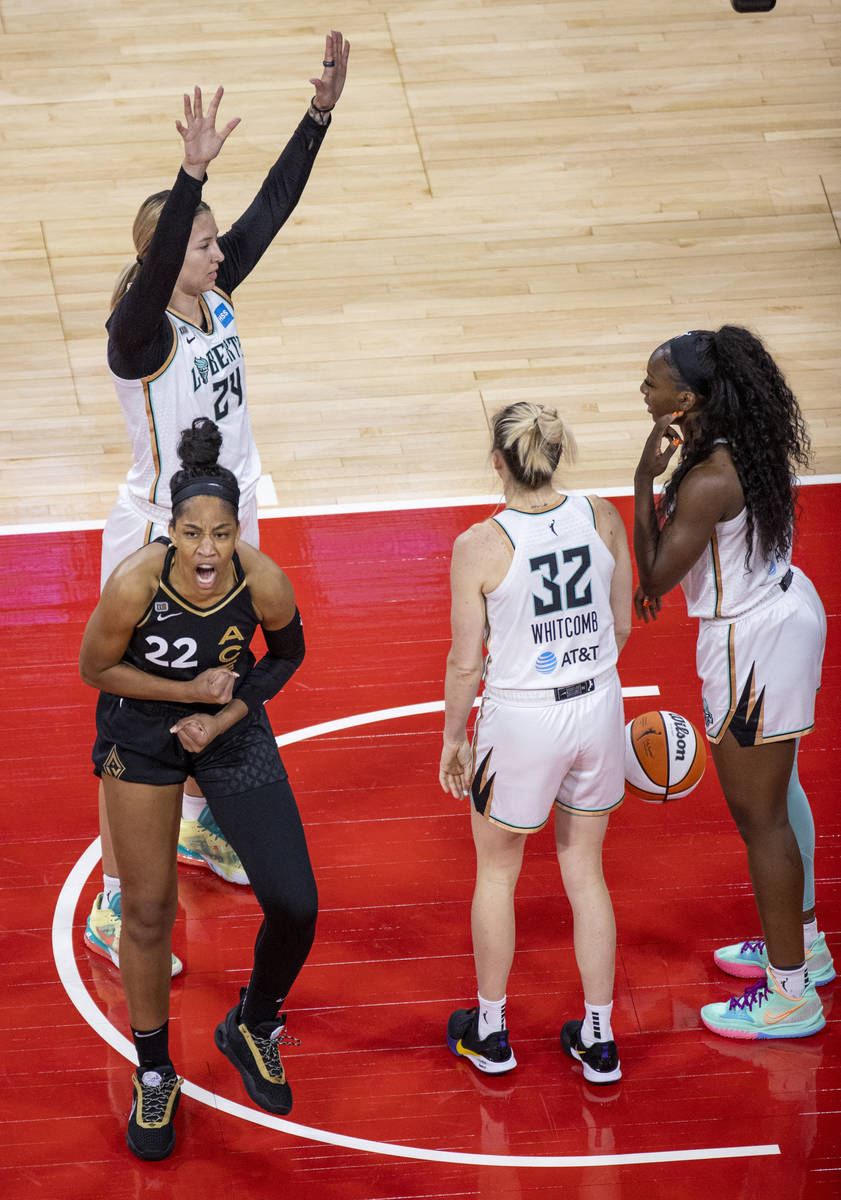 Las Vegas Aces forward A'ja Wilson (22) is pumped up after a foul and score over New York Liberty forward Kylee Shook (24) during the first quarter of a WNBA basketball at the Michelob Ultra Arena on Thursday, June 17, 2021, in Las Vegas. (L.E. Baskow/Las Vegas Review-Journal) @Left_Eye_Images 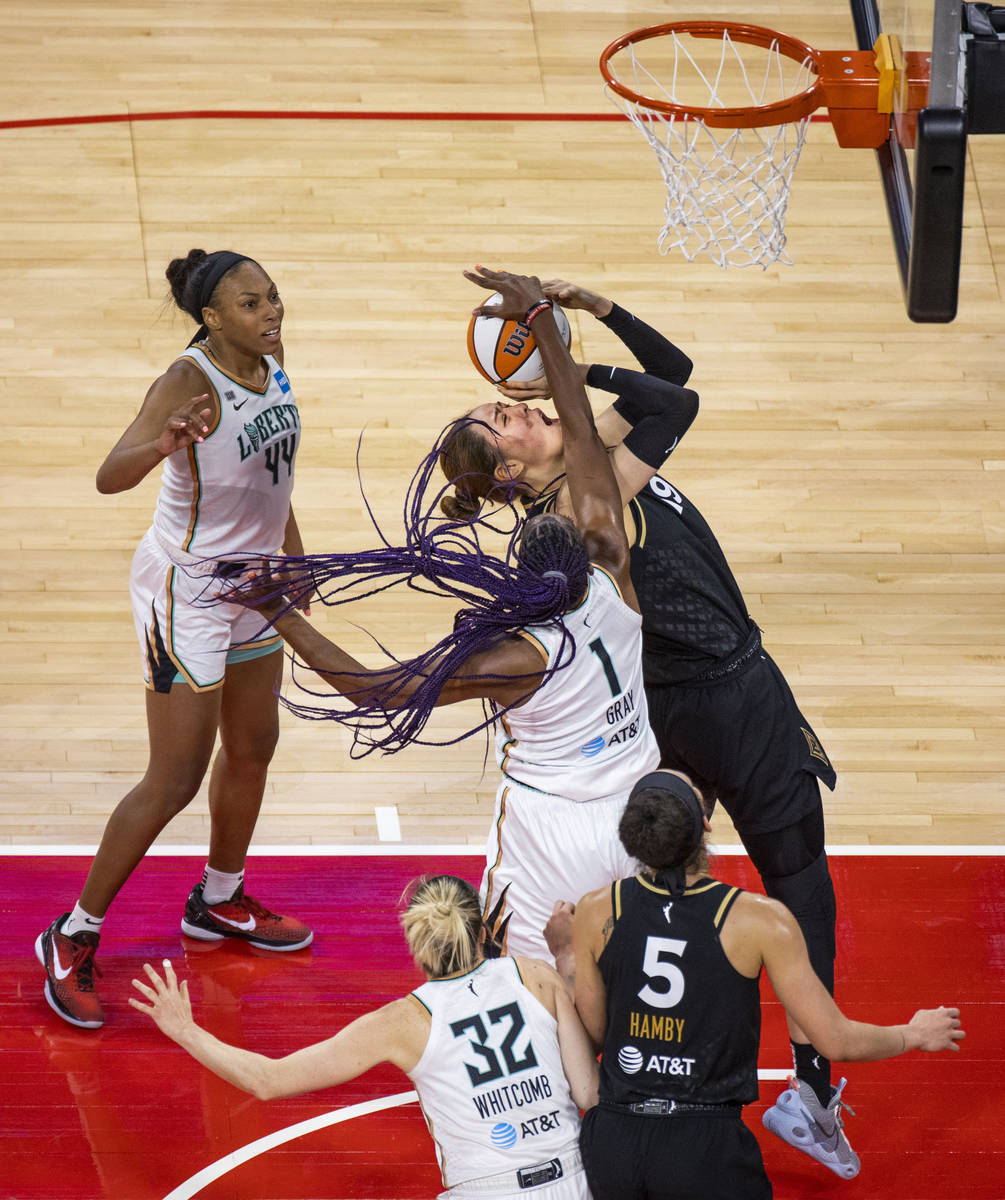 Las Vegas Aces center JiSu Park (19) gets off a shot while fouled by New York Liberty forward Reshanda Gray (1) during the second quarter of a WNBA basketball at the Michelob Ultra Arena on Thursday, June 17, 2021, in Las Vegas. (L.E. Baskow/Las Vegas Review-Journal) @Left_Eye_Images 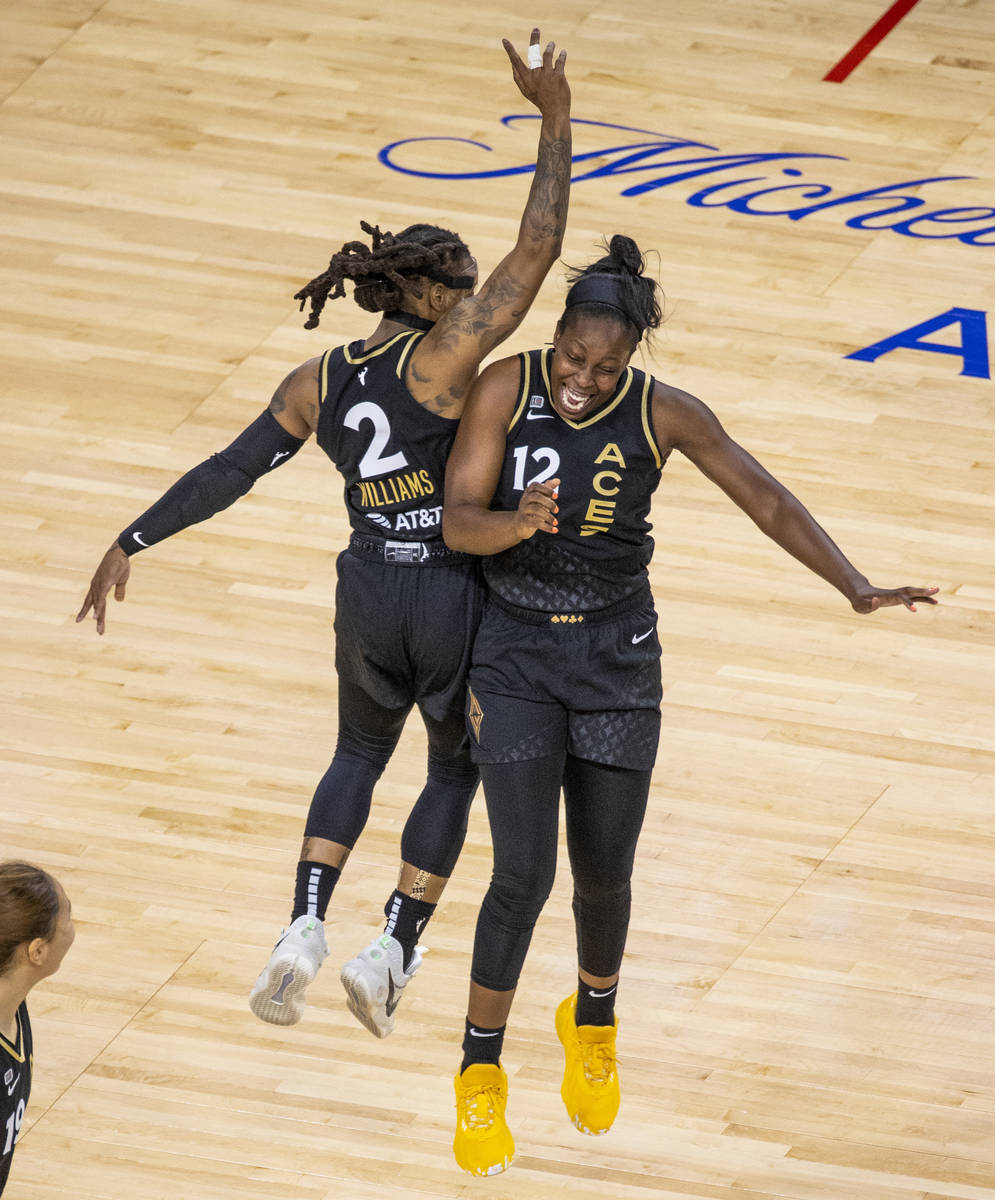 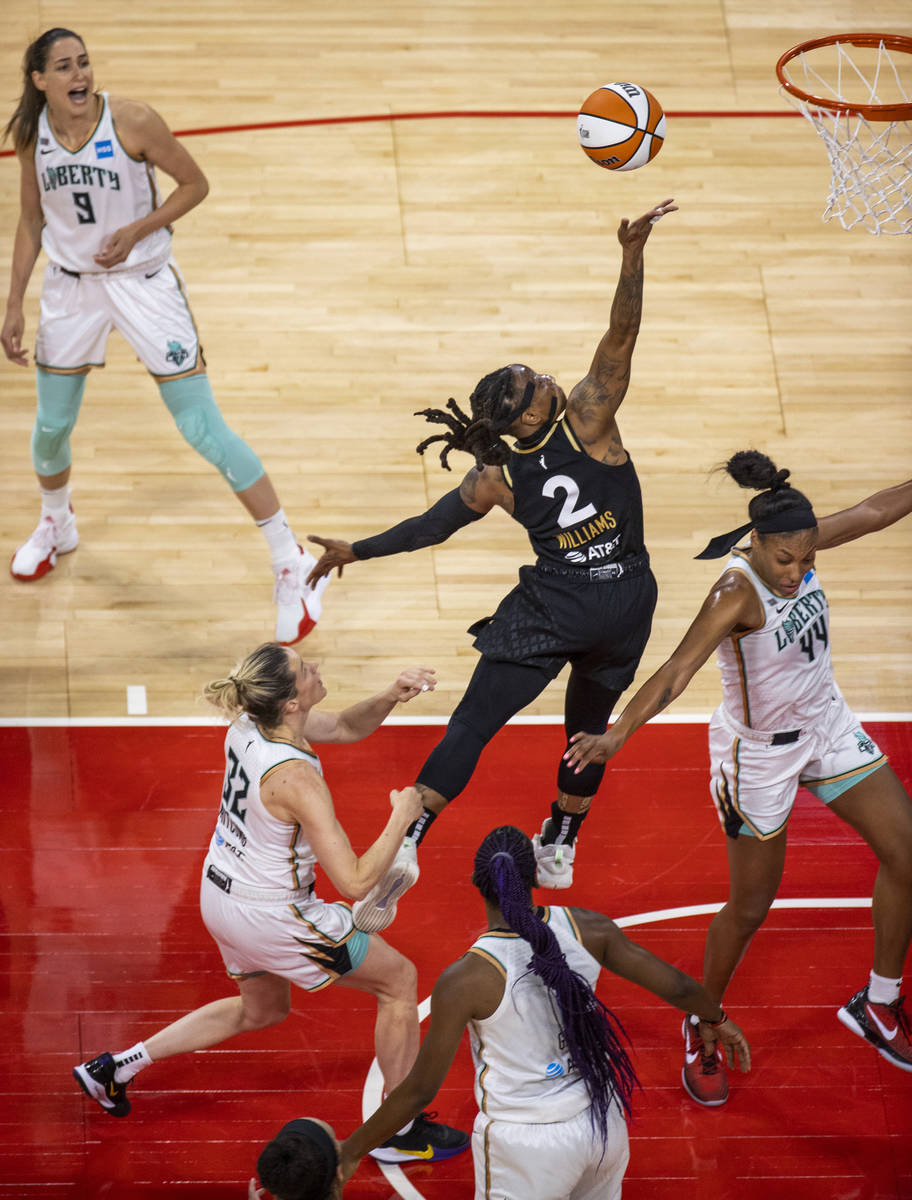 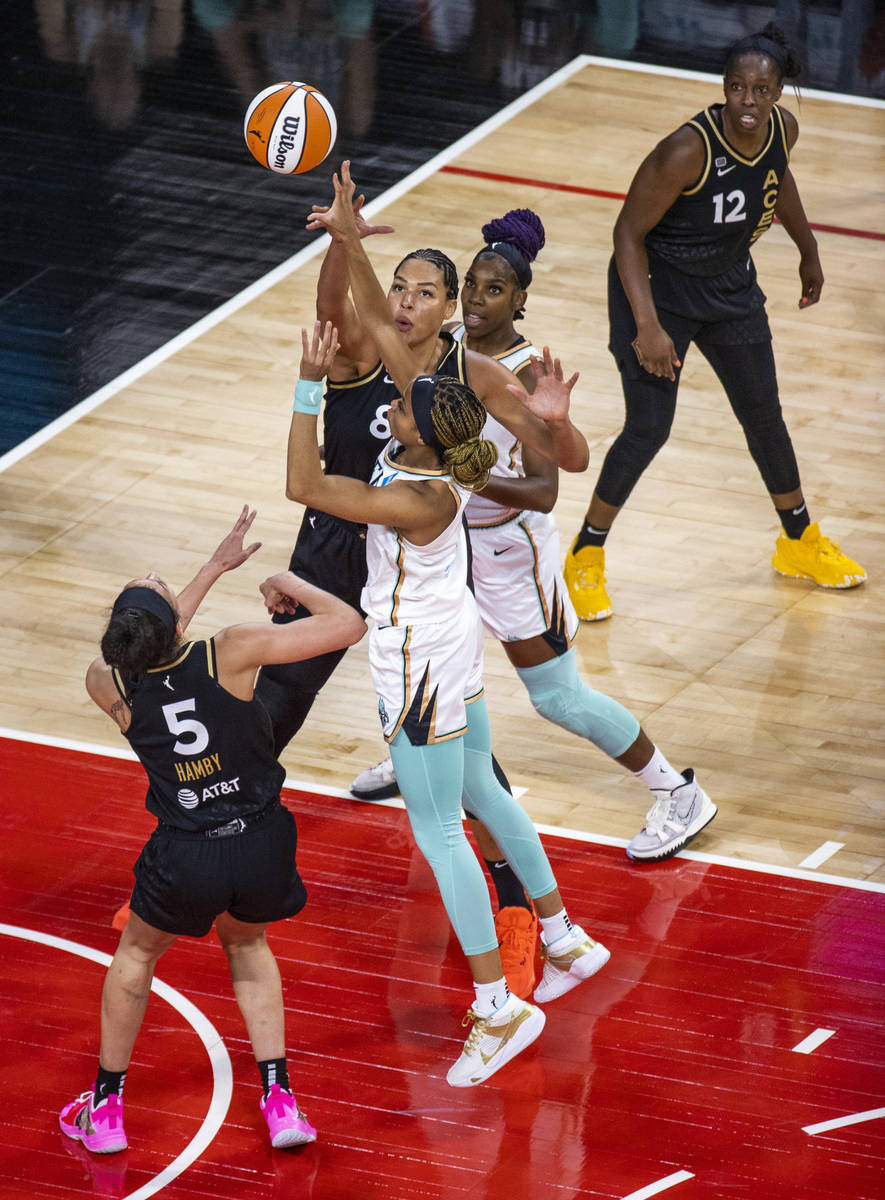 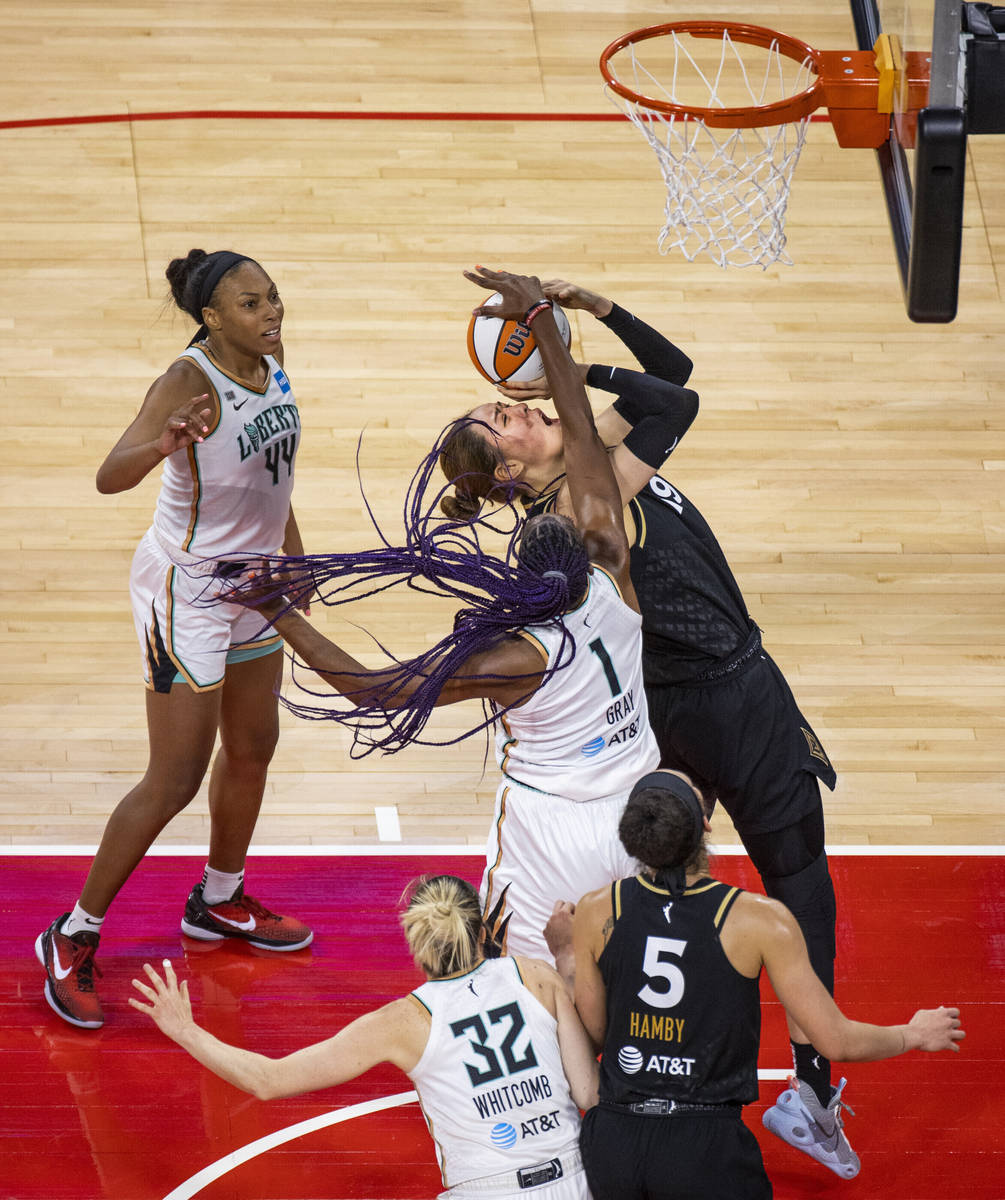 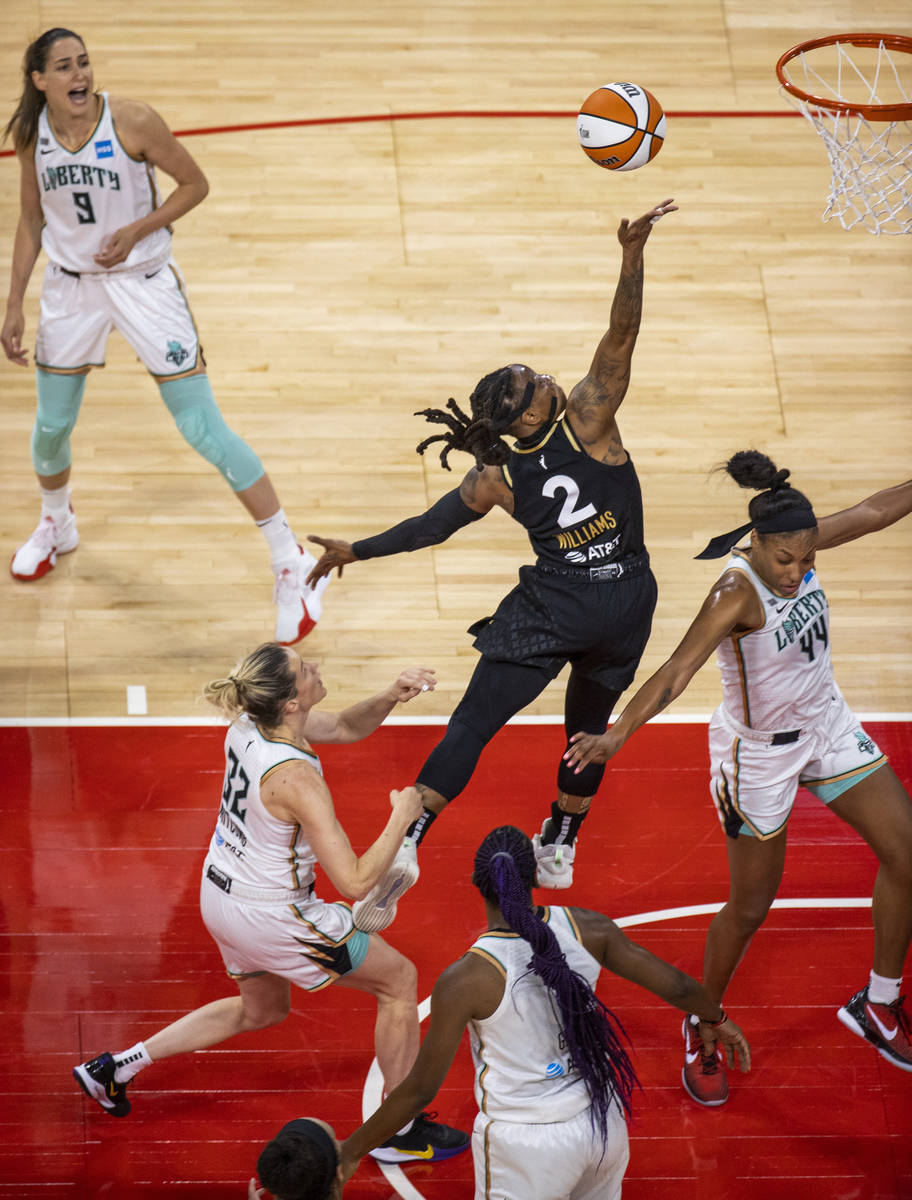 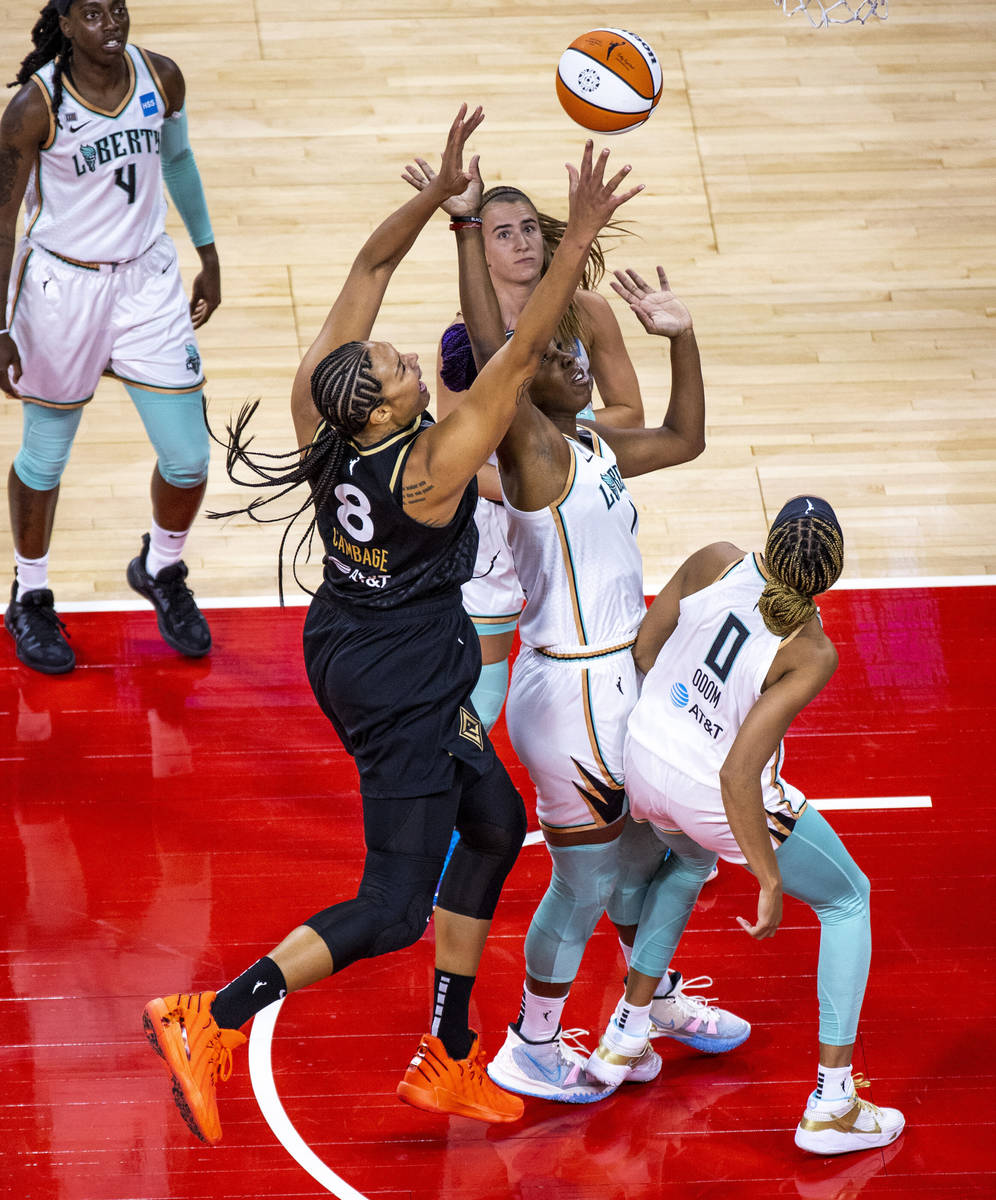 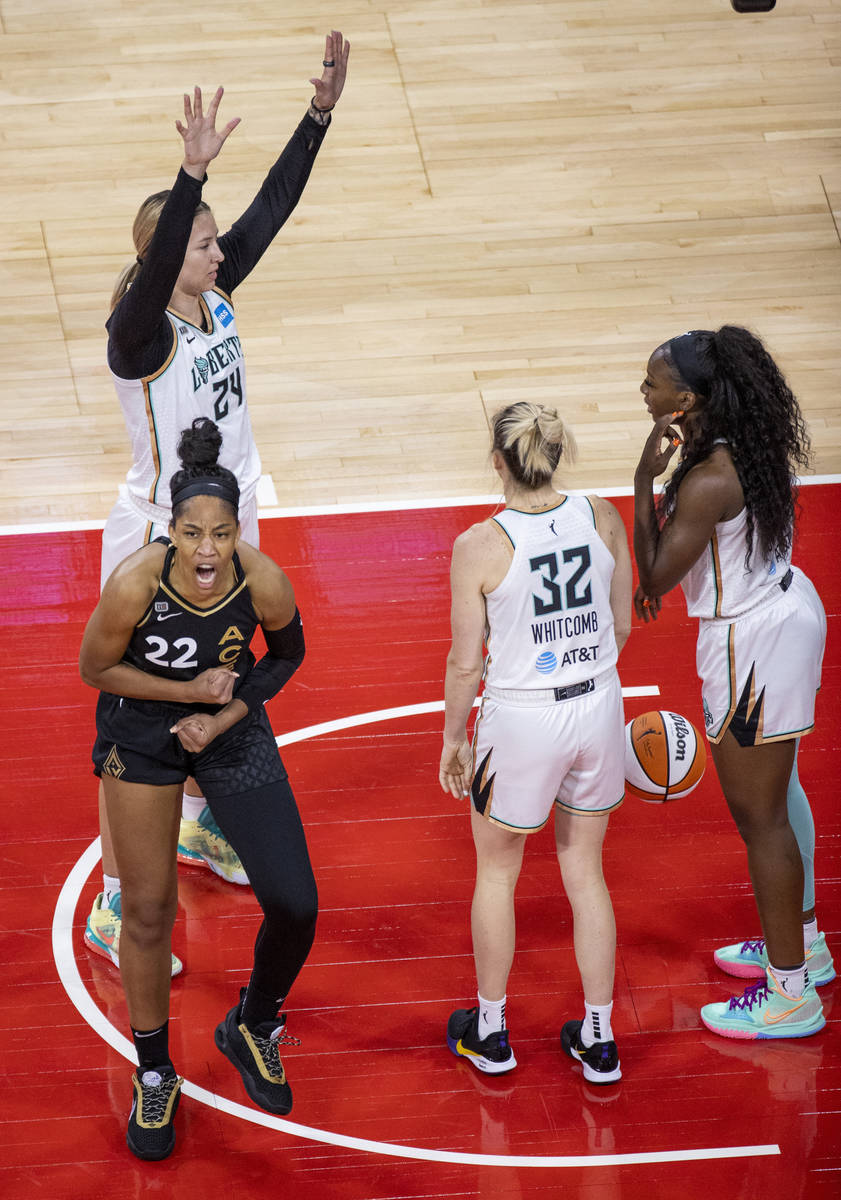 Las Vegas Aces forward A'ja Wilson (22) is pumped up after a score and a foul by New York Liberty forward Kylee Shook (24) during the first quarter of a WNBA basketball game Thursday, June 17, 2021, in Las Vegas. (L.E. Baskow/Las Vegas Review-Journal via AP) 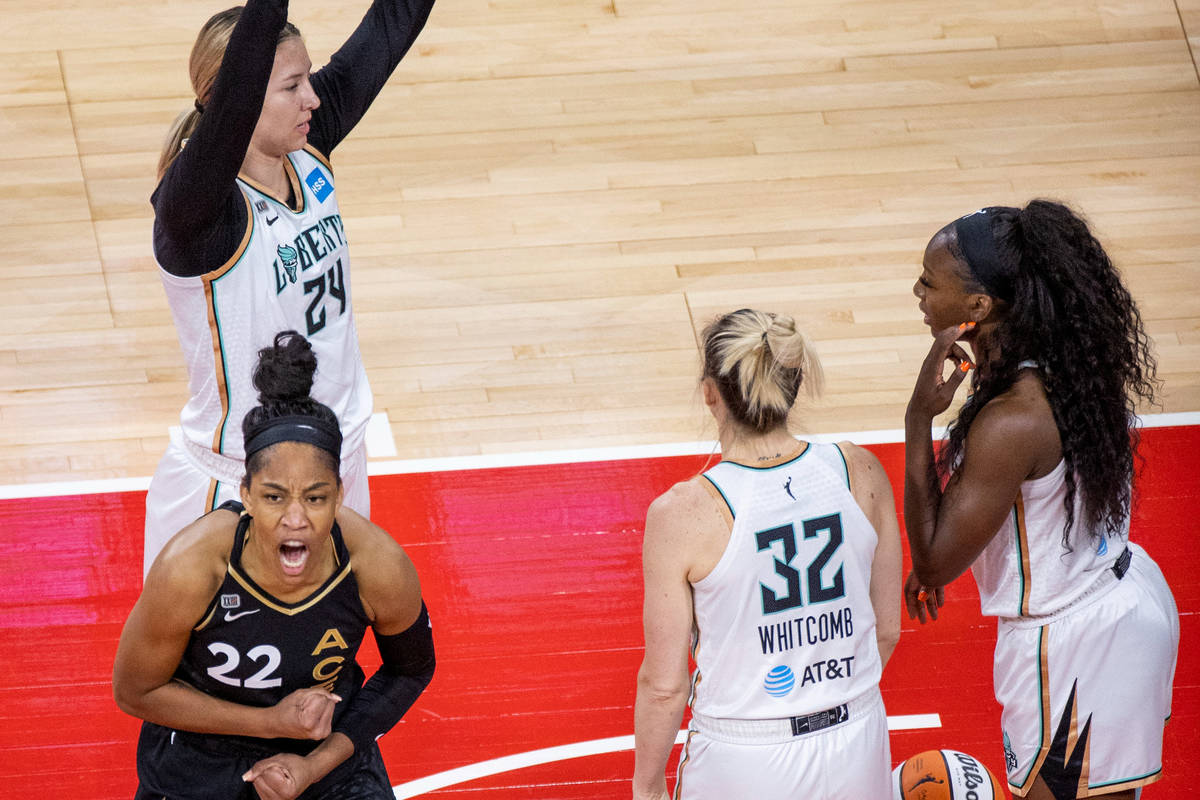 Las Vegas Aces forward A'ja Wilson (22) is pumped up after a score and a foul by New York Liberty forward Kylee Shook (24) during the first quarter of a WNBA basketball game Thursday, June 17, 2021, in Las Vegas. (L.E. Baskow/Las Vegas Review-Journal via AP)

With the All-Star front line of A’ja Wilson and Liz Cambage watching from the bench in the second quarter, the Aces did everything but simply protect the lead.

Whether it was Riquna Williams scoring 11 points in a minute and 25 seconds or Kelsey Plum knocking down consecutive 3-pointers, the Aces outscored the New York Liberty by 14 points in the quarter and went up by 21.

With the outcome never in doubt after that, the Aces went on to win 103-76 on Thursday at Michelob Ultra Arena for their fifth victory in a row.

“I think we have the best team one through 12, and Bill’s (Laimbeer) always done a good job of orchestrating the bench,” said Dearica Hamby, who had 10 points, 12 rebounds and five assists. “We had a meeting not too long ago about how he envisioned this bench with this team. I think we’ve kind of proven him right tonight, so I’m sure he’s happy.”

On the other side, New York (6-6) eased star Sabrina Ionescu back into the lineup after she missed the two previous games with ankle tendinitis. Ionescu showed up at the arena wearing a Raiders jersey of backup quarterback Marcus Mariota, a fellow Oregon product. She played 15 minutes and scored just one point, missing all five shots.

No matter who was on the court for the Liberty, the Aces (10-3) used their size up front to contest just about every shot. They finished with 10 blocked shots from six players.

That commitment on the defensive end helped lead to transition on the other side, and the Aces reached triple digits for the fourth time and the second in a row against the Liberty. Six players scored in double figures, with Plum leading with 18 points and Wilson next with 17.

“When we’re able to get stops and then play in transition, it makes a lot of things very easy,” said point guard Chelsea Gray, who finished with 15 points and six assists. “We’re getting paint touches, and we’re getting fouls called and we’re kicking out for 3s. Everything is flowing.”

Underscoring the team’s depth was the production from JiSu Park, who averages 1.3 points. She totaled seven points, eight rebounds and three blocked shots in 16 minutes.

Such performances from the unusual suspects energized the crowd, which for the first time this season was allowed to sit close to the court.

“It was so great having the fans back in the building,” Laimbeer said. “With the team that we have, that’s going to push our team. They really like playing in front of the fans. They wanted to put on a show, and tonight I thought we put on a pretty good show for them.”