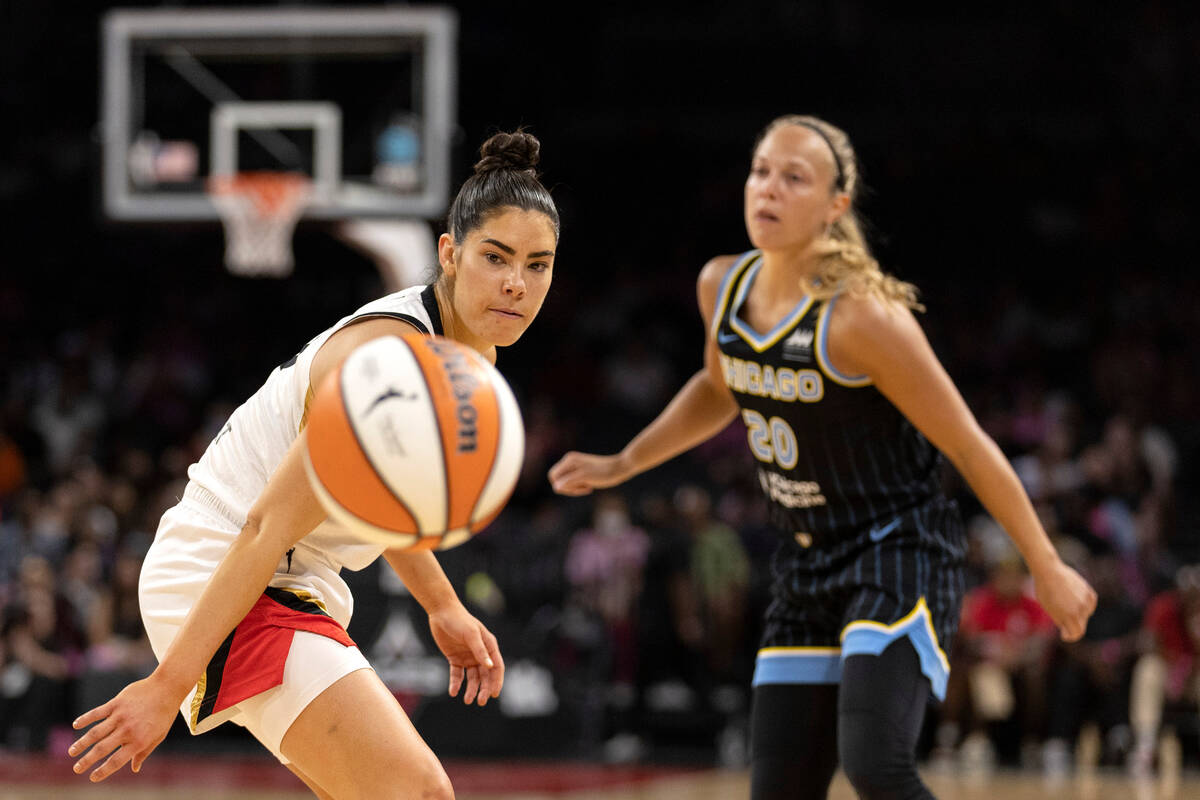 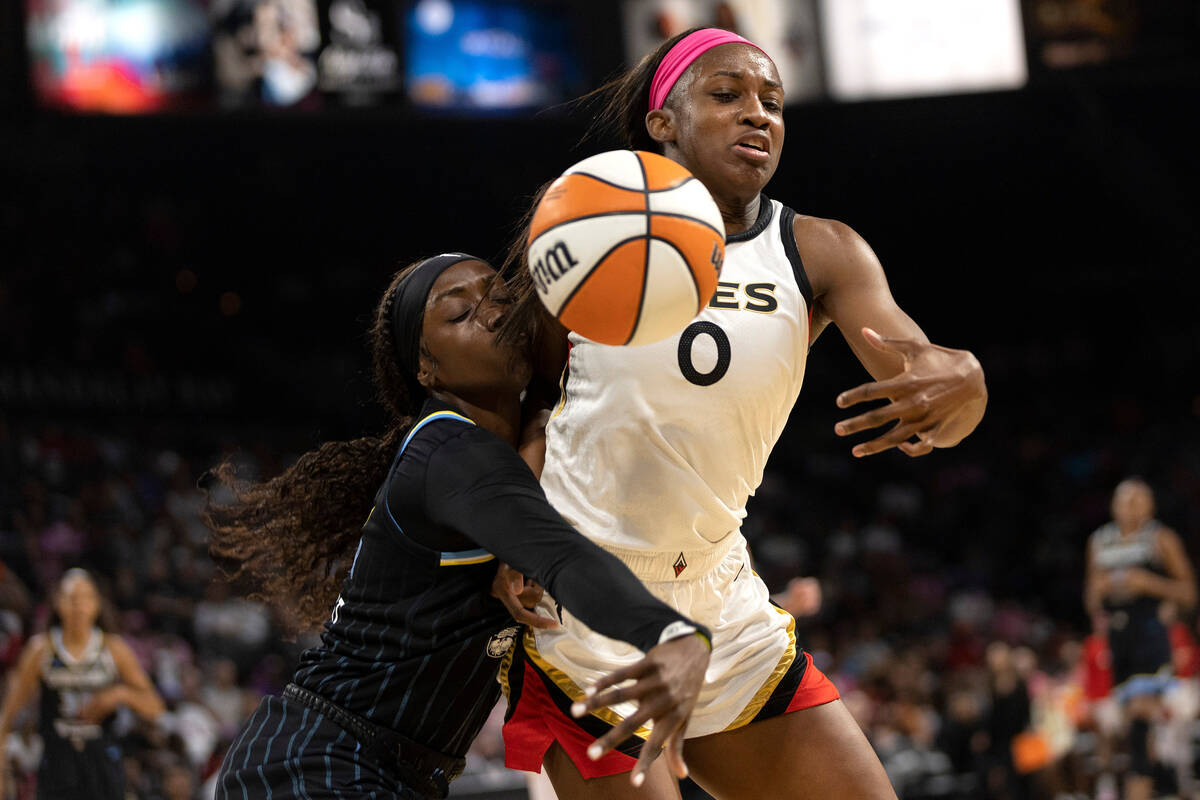 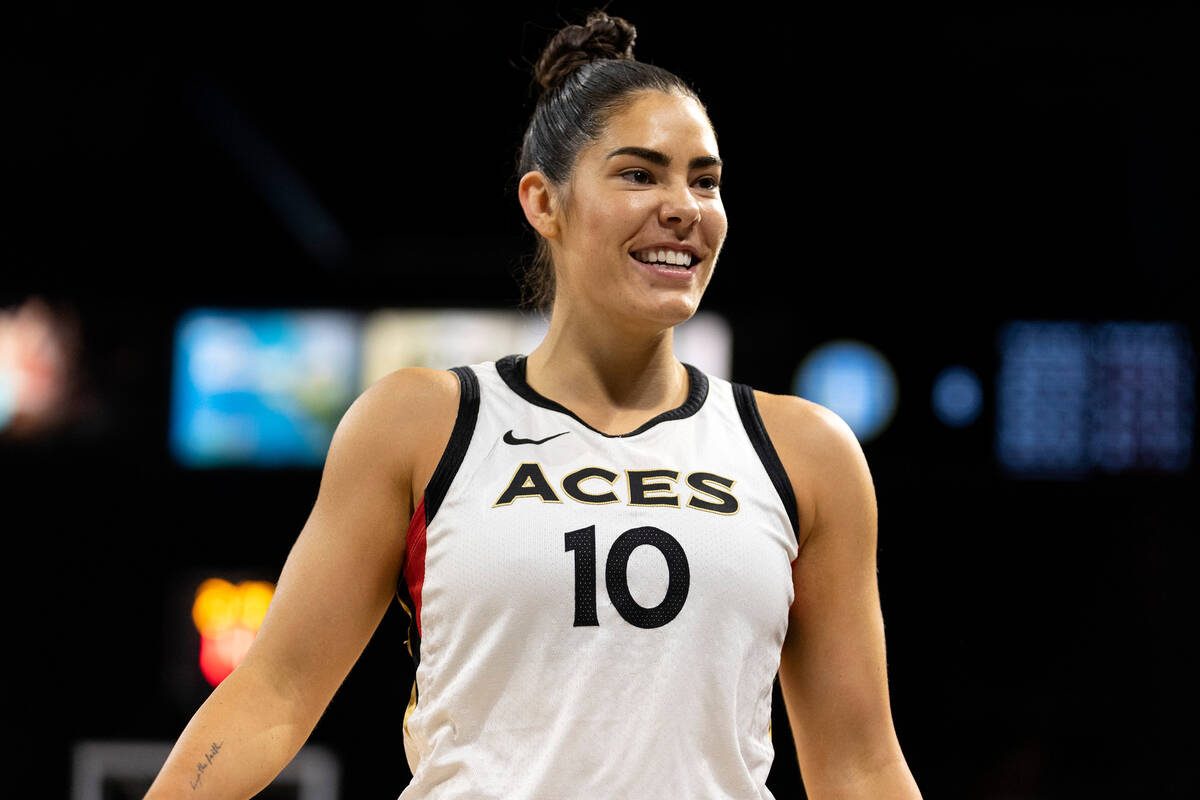 Las Vegas Aces guard Kelsey Plum (10) smiles at a play made by guard Jackie Young (0) during the first half of a WNBA basketball game against the Chicago Sky at Michelob ULTRA Arena on Thursday, Aug. 11, 2022, in Las Vegas. (Ellen Schmidt/Las Vegas Review-Journal) @ellenschmidttt 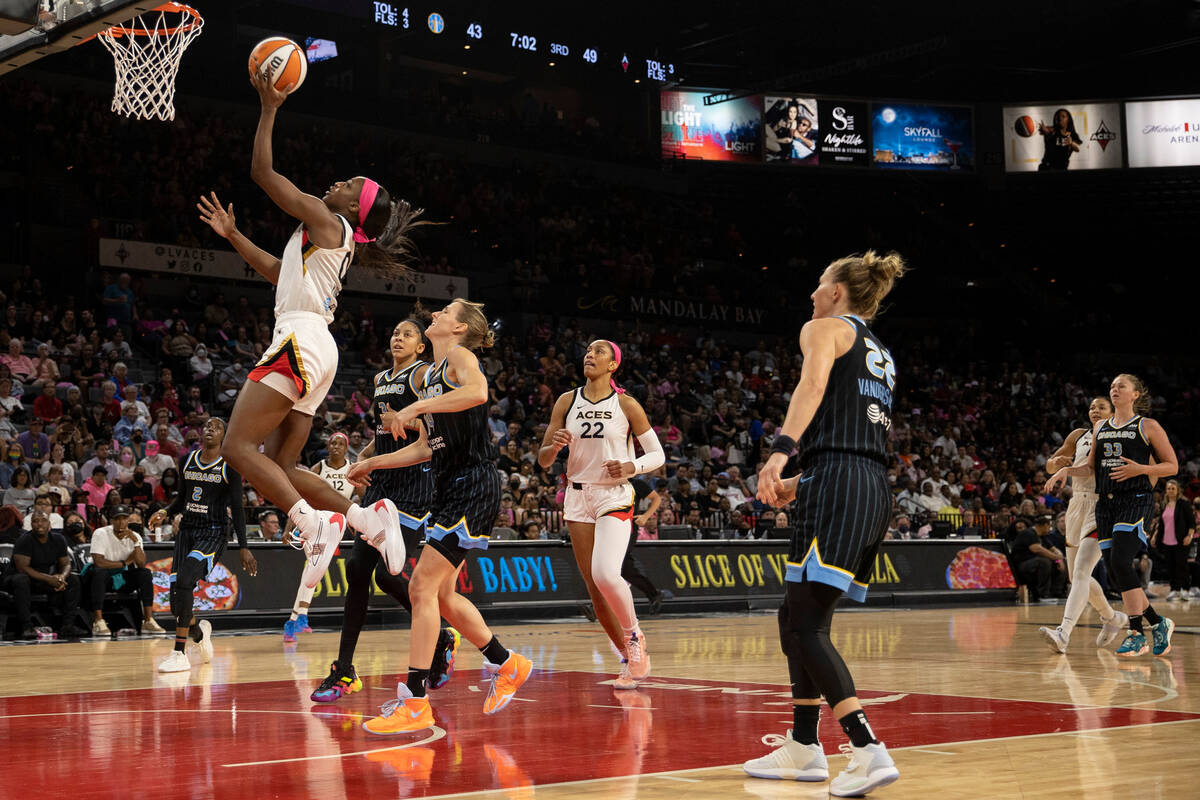 After stealing possession, Las Vegas Aces guard Jackie Young (0) reaches the basket for a layup during the second half of a WNBA basketball game against the Chicago Sky at Michelob ULTRA Arena on Thursday, Aug. 11, 2022, in Las Vegas. (Ellen Schmidt/Las Vegas Review-Journal) @ellenschmidttt

Their midsummer swoon began June 21 at Michelob Ultra Arena against the same team the Aces throttled Thursday night in their penultimate regular season game. They squandered a 28-point lead that night.

That loss was a byproduct of the uninspired defense that cost them four of the six ensuing games — and their top spot in the WNBA standings.

It was a spot they reclaimed from the Chicago Sky with a decisive 89-78 victory in their most impressive outing of the season.

The midsummer swoon is over, and the Aces played every bit like the championship team they aspire to be en route to their win over the defending WNBA champions. Their secondary break complemented a crisp halfcourt offense, an attack characterized Thursday night by the kind of ball and player movement coach Becky Hammon has called for all year.

What’s more their defense was cohesive, communicative and crisp against the Sky and their No. 2 offensive rating. Chicago had a respectable field-goal percentage — 46.2 — but the Aces forced theSky into 17 turnovers with their frenetic defensive activity.

Hammon said during that midsummer swoon that she hoped the Aces would peak in August as the playoffs approach. Wins in 11 of their last 14 games, including those over fellow championship contenders like the Sky and the Seattle Storm suggest they’re doing just that.

“Defensively, for the most part, we were locked in,” Aces All-Star guard Kelsey Plum said after scoring a team-high 25. “They just have so many weapons, and I felt like overall for us to be as locked in as we (were), that was pretty cool.”

Because of their defense, the Aces didn’t require dominance from MVP front-runner A’ja Wilson or impeccable poise in crunch time from point guard Chelsea Gray. They combined for 18 points and were perfectly content ceding the brunt of the scoring to Plum and Jackie Young.

The Aces secured a double-figure lead in the first quarter and successfully nursed it for most of the game, thanks to their principled approach on both ends.

“There were some situations where we just isolated people, and they just made the right play,” Hammon said. “The isolation isn’t just for that player to go score. The isolation is to make a play, and then see what they do. We’re starting to get the next iteration.”

Plum dominated the first half with 18 points and Young dominated the third quarter with 16. Reserve guard Riquna Williams scored 12 in her finest outing of the season, bolstering a bench devoid of Dearica Hamby, who may miss a few weeks with a bone contusion in her right knee.

Conversely, the Aces pressured Chicago’s ball handlers, helped and rotated on time to disrupt the flow of the Sky’s offense. They’ll only go as far as their defense takes them, something Hammon reaffirmed again after the game.

“The defense has to be there night in and night out,” Hammon said. “On every team there is an elite scorer. It’s just about making their looks as difficult as possible.”

Hammon considers the two-week swoon plus the two weeks after the All-Star break in July as the most important stretch of the Aces’ season. After that, the Aces are for “the most part, a different team,” she says. Credit a “come to Jesus” meeting in New York as the season resumed.

They were definitely a different team Thursday, one that seems quite capable of clinching the No. 1 seed Sunday to cap Hammon’s first regular season as their head coach.

“At the end of the day, we still ain’t won (expletive),” she said. “No one here wants to take first place in the regular season. … It’s not the goal. The goal is to be the last team standing.”