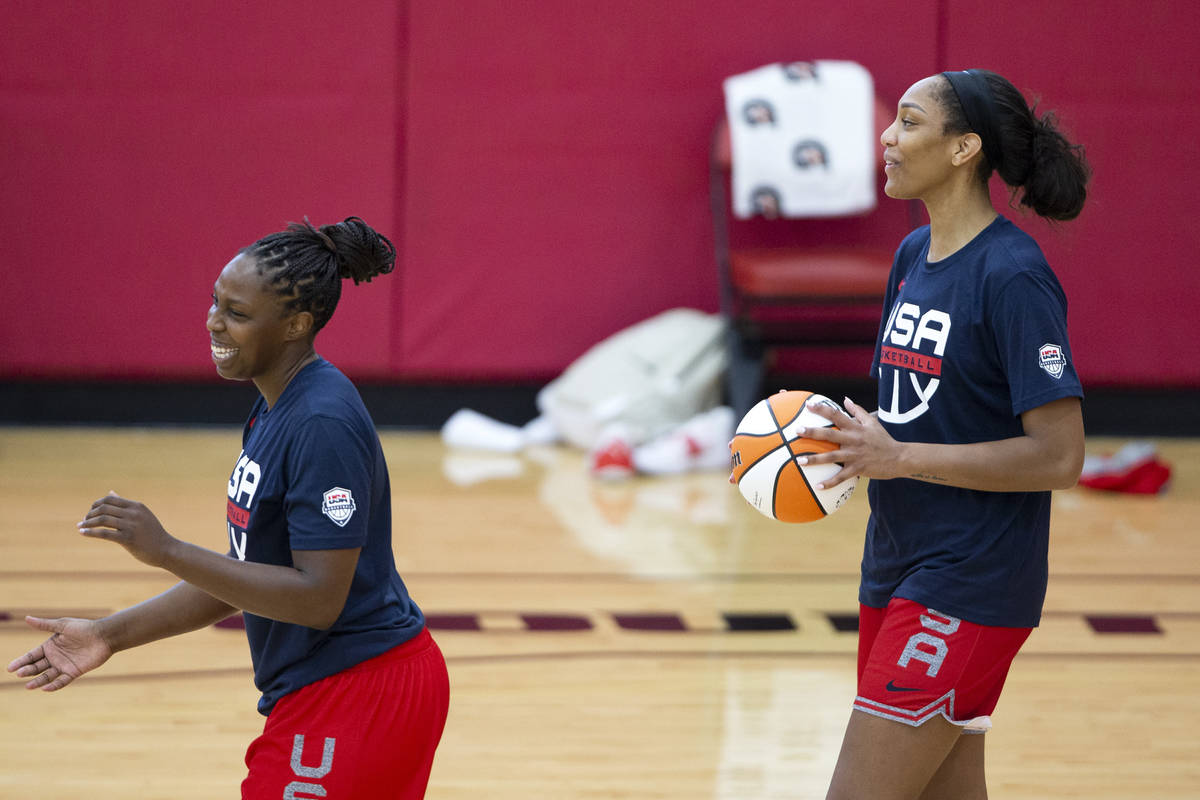 Chelsea Gray, left, and A'ja Wilson, who both play for the Las Vegas Aces in the WNBA, share a laugh during a 2021 USA Basketball Women's National team practice in Mendenhall Center at UNLV on Tuesday, July 13, 2021, in Las Vegas. (Ellen Schmidt/Las Vegas Review-Journal) @ellenschmidttt 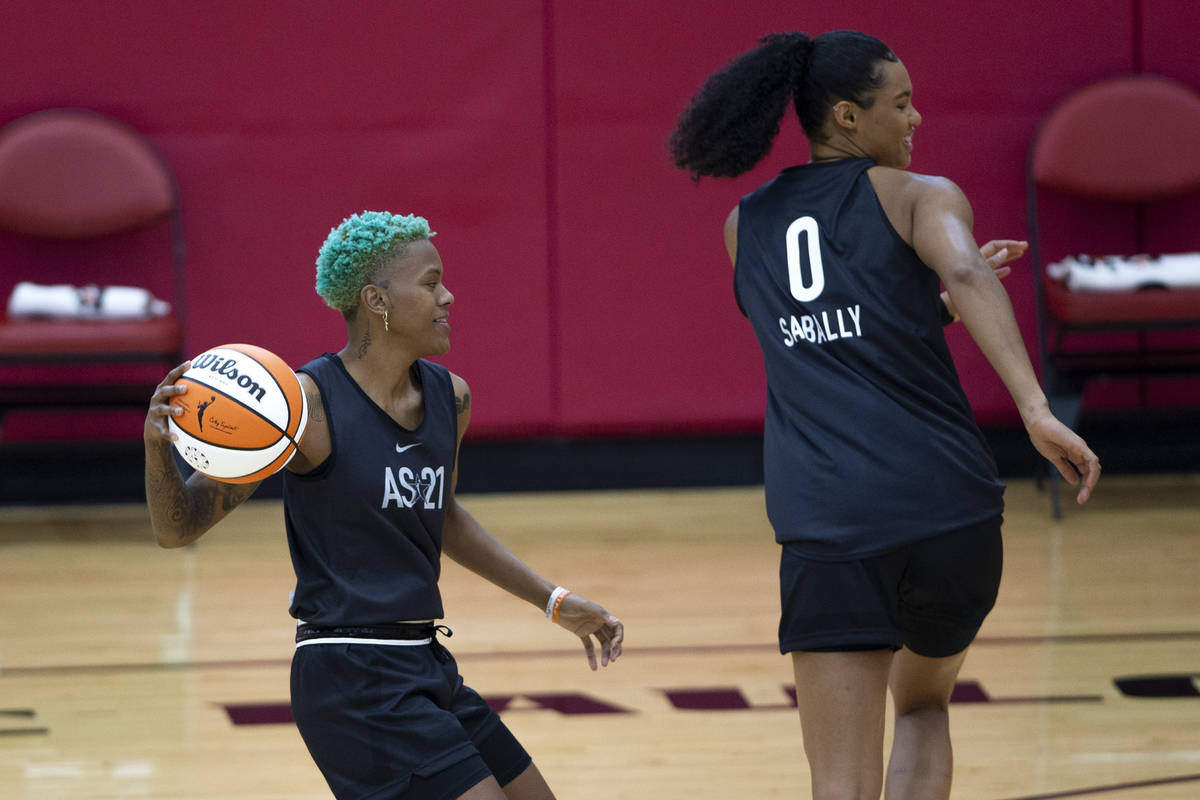 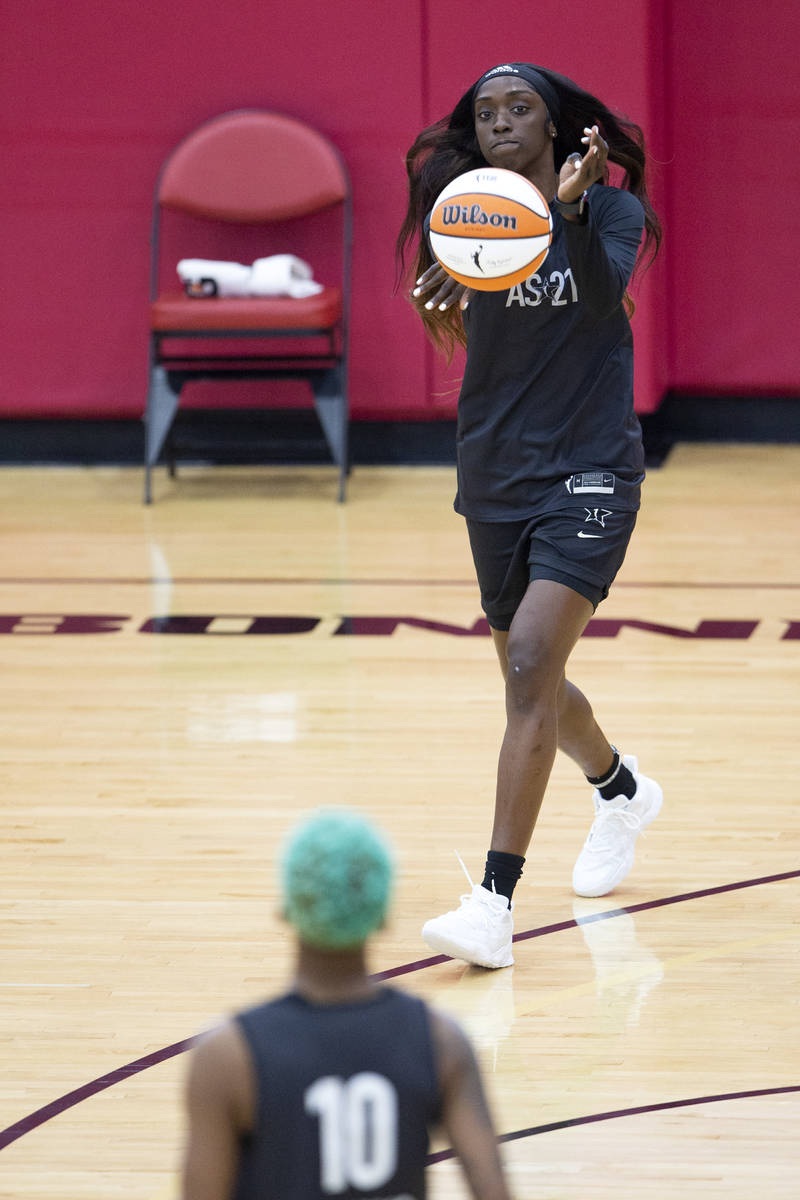 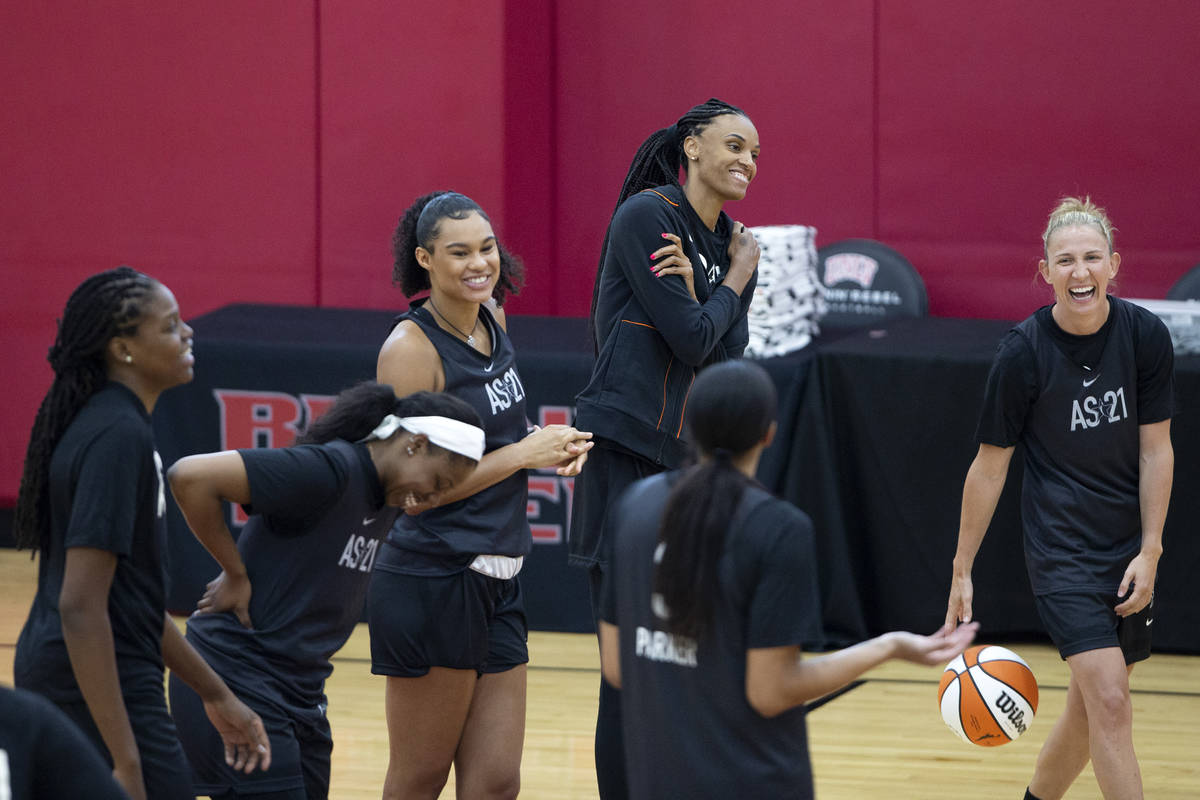 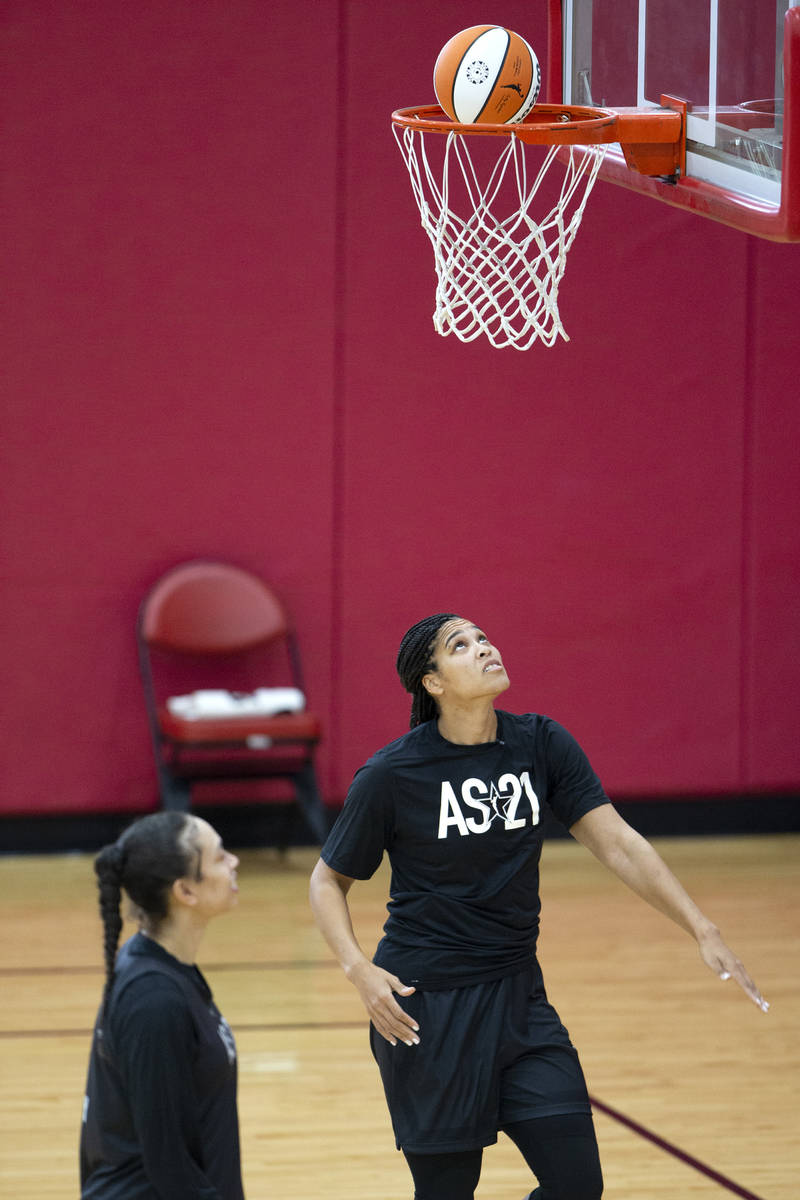 Brionna Jones, right, eyes her basket while Dearica Hamby, who plays for the Las Vegas Aces in the WNBA, looks on during a 2021 Team WNBA practice in Mendenhall Center at UNLV on Tuesday, July 13, 2021, in Las Vegas. (Ellen Schmidt/Las Vegas Review-Journal) @ellenschmidttt 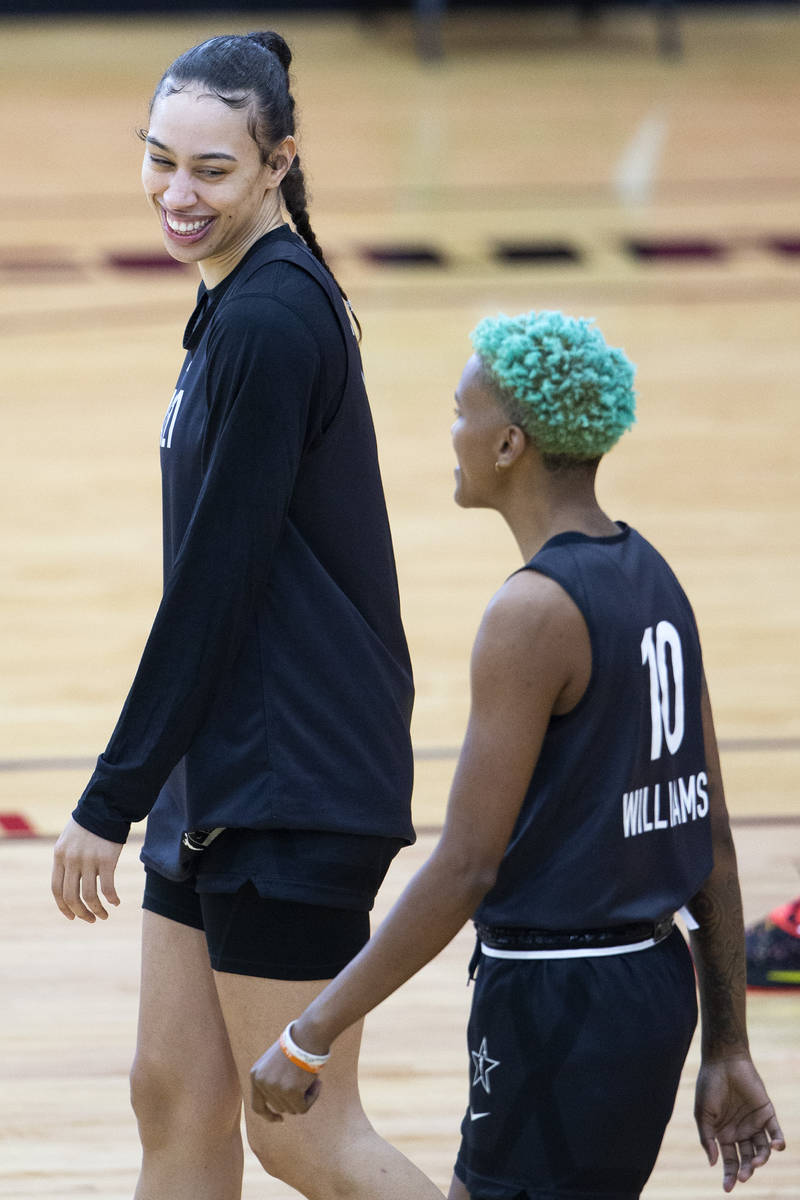 Dearica Hamby, left, who plays for the Las Vegas Aces in the WNBA, laughs alongside Courtney Williams during a 2021 Team WNBA practice in Mendenhall Center at UNLV on Tuesday, July 13, 2021, in Las Vegas. (Ellen Schmidt/Las Vegas Review-Journal) @ellenschmidttt 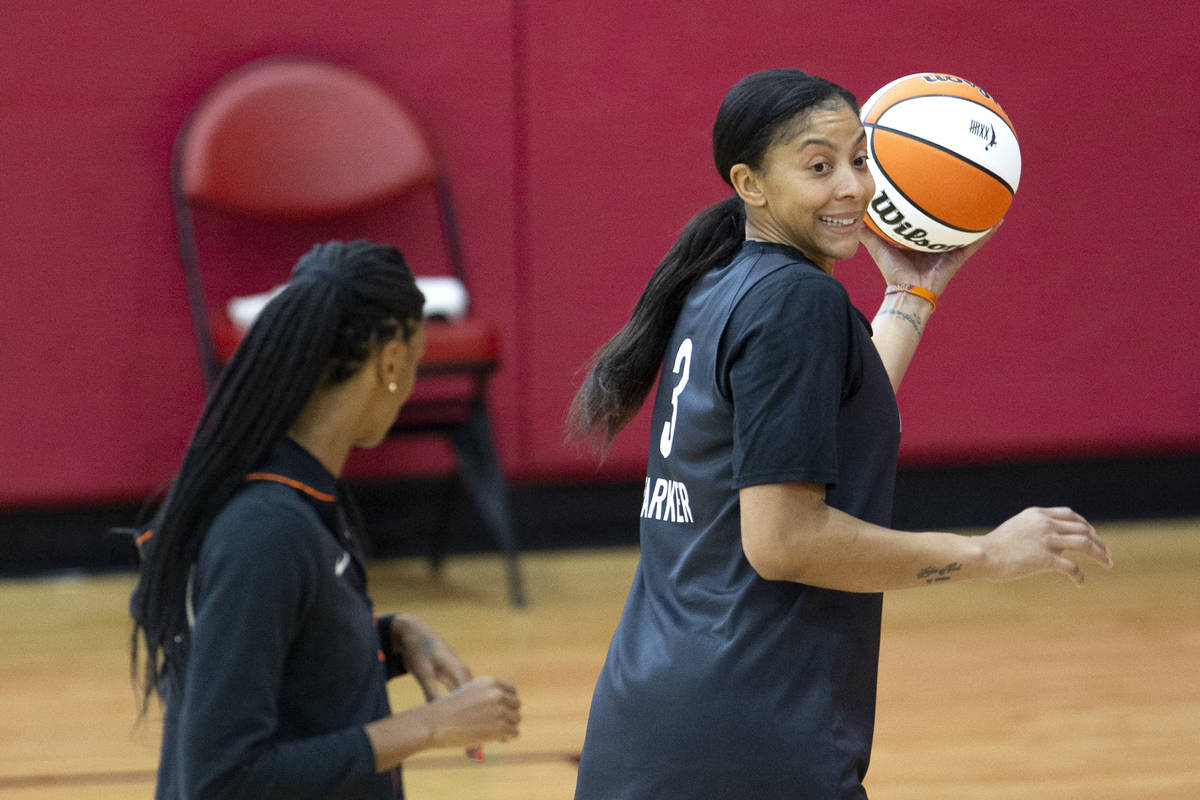 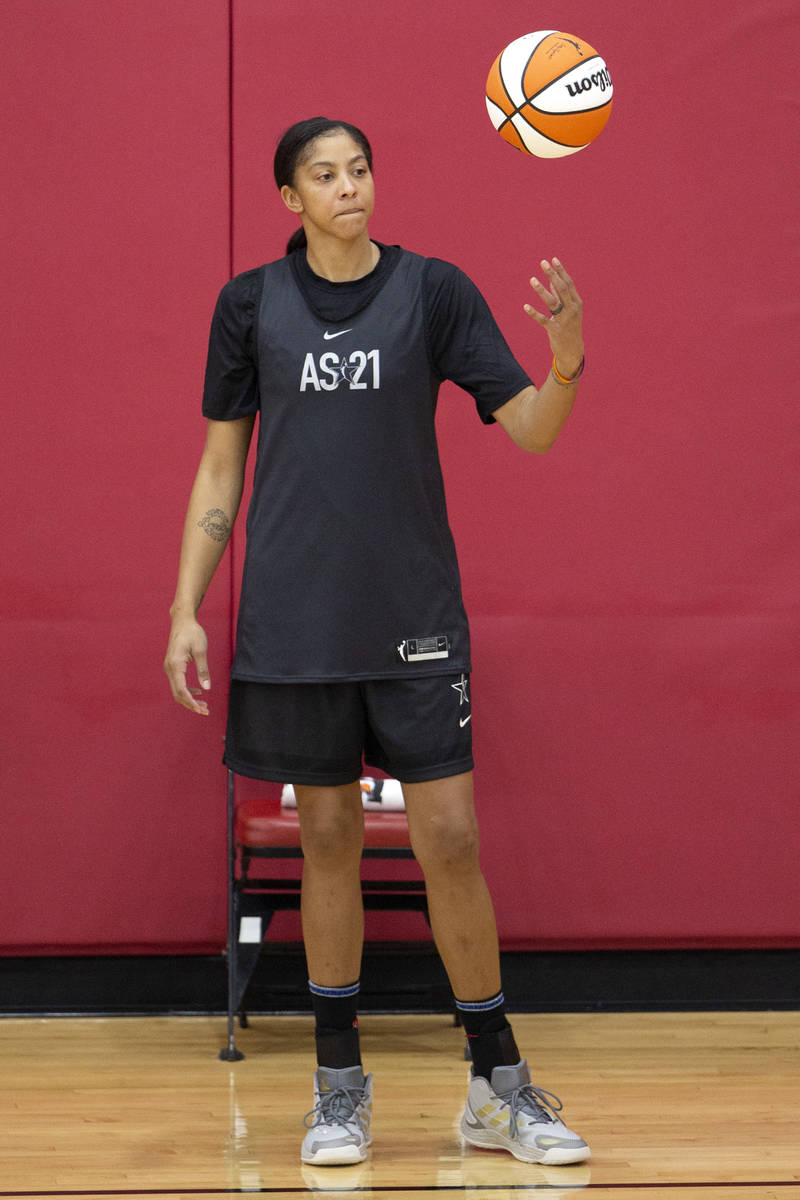 Candace Parker tosses the ball while looking for a teammate to pass to during a 2021 Team WNBA practice in Mendenhall Center at UNLV on Tuesday, July 13, 2021, in Las Vegas. (Ellen Schmidt/Las Vegas Review-Journal) @ellenschmidttt 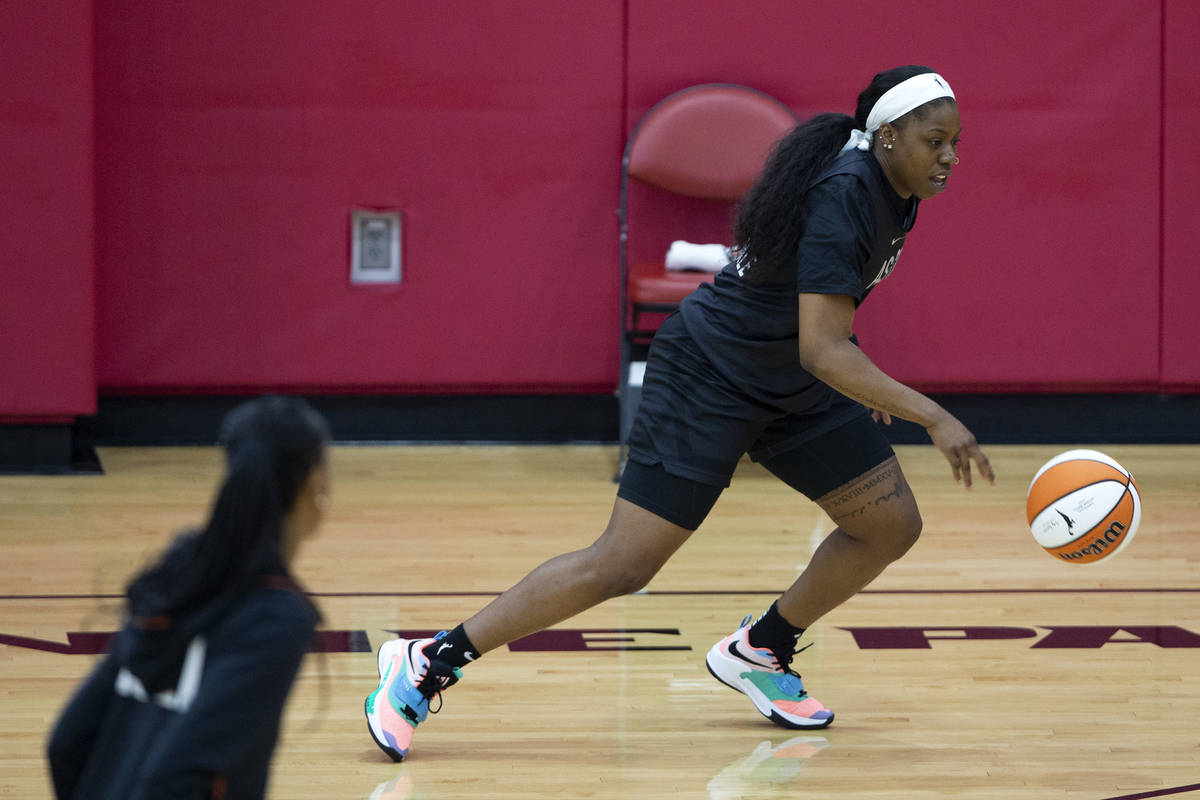 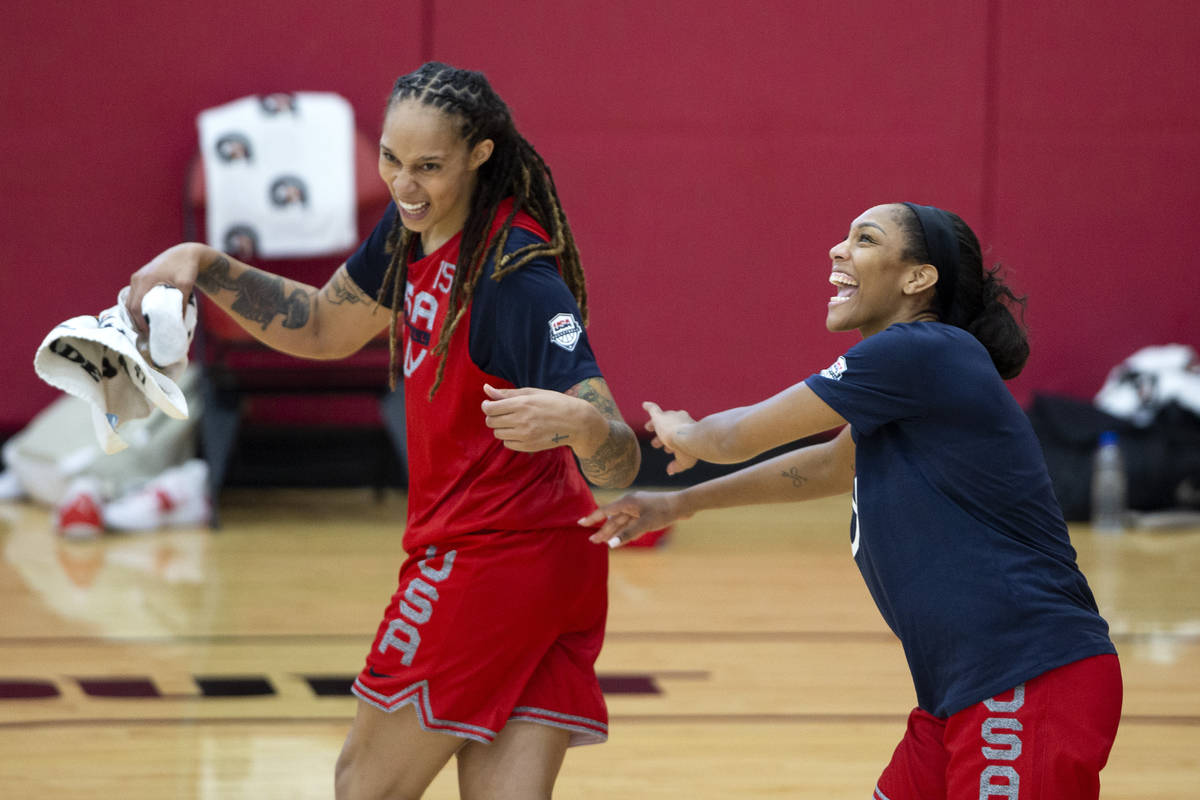 Brittney Griner, left, and A'ja Wilson, who plays for the Las Vegas Aces in the WNBA, break out in laughter during a 2021 USA Basketball Women's National team practice in Mendenhall Center at UNLV on Tuesday, July 13, 2021, in Las Vegas. (Ellen Schmidt/Las Vegas Review-Journal) @ellenschmidttt 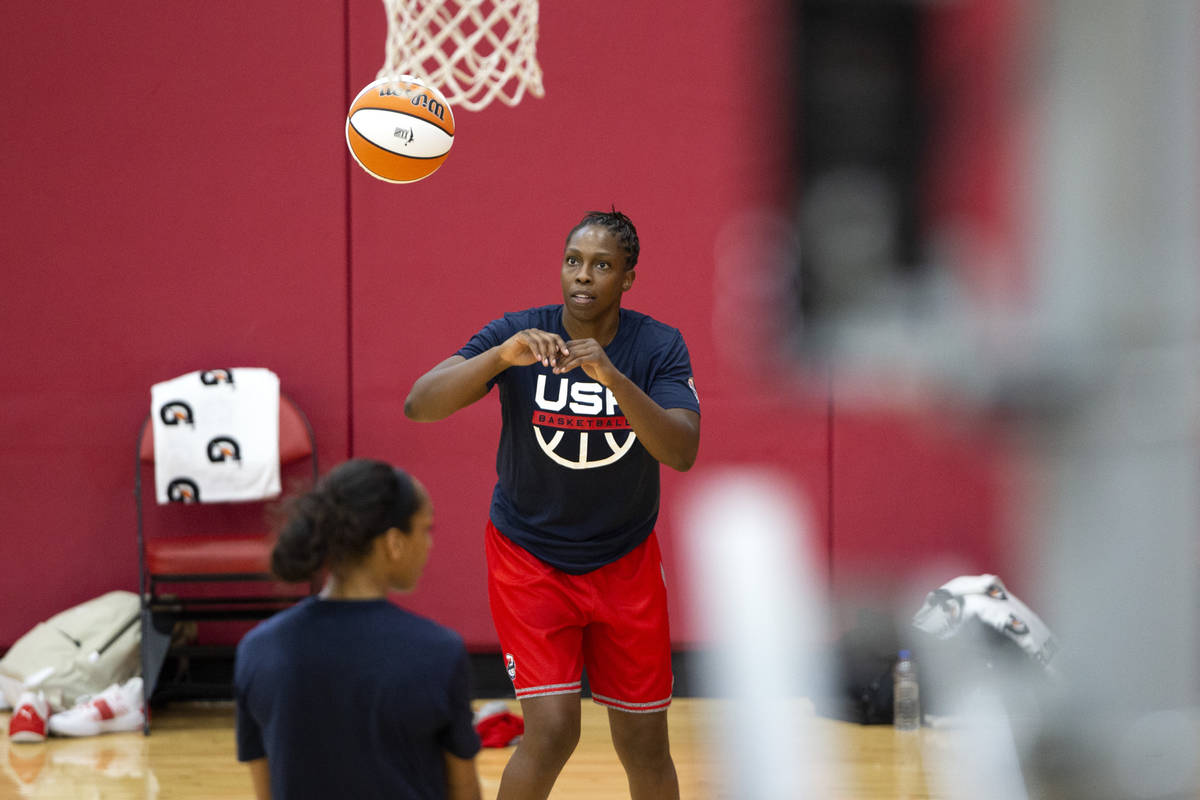 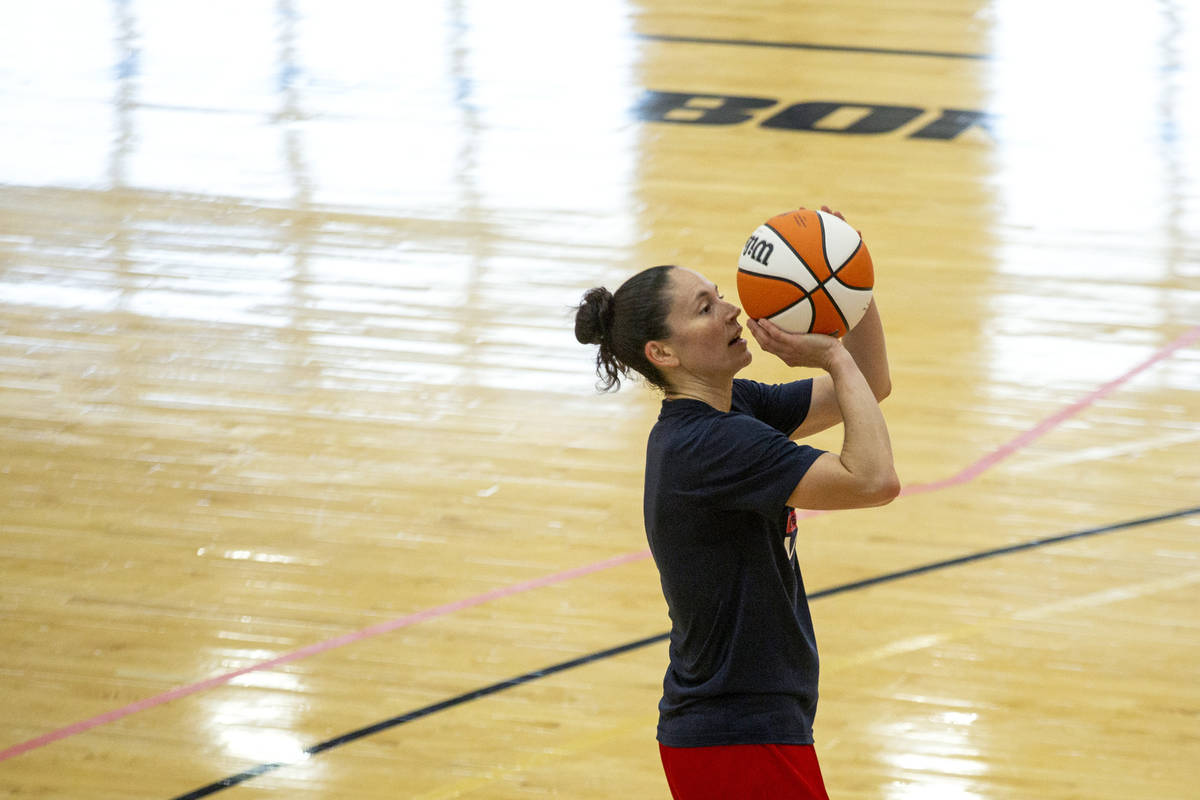 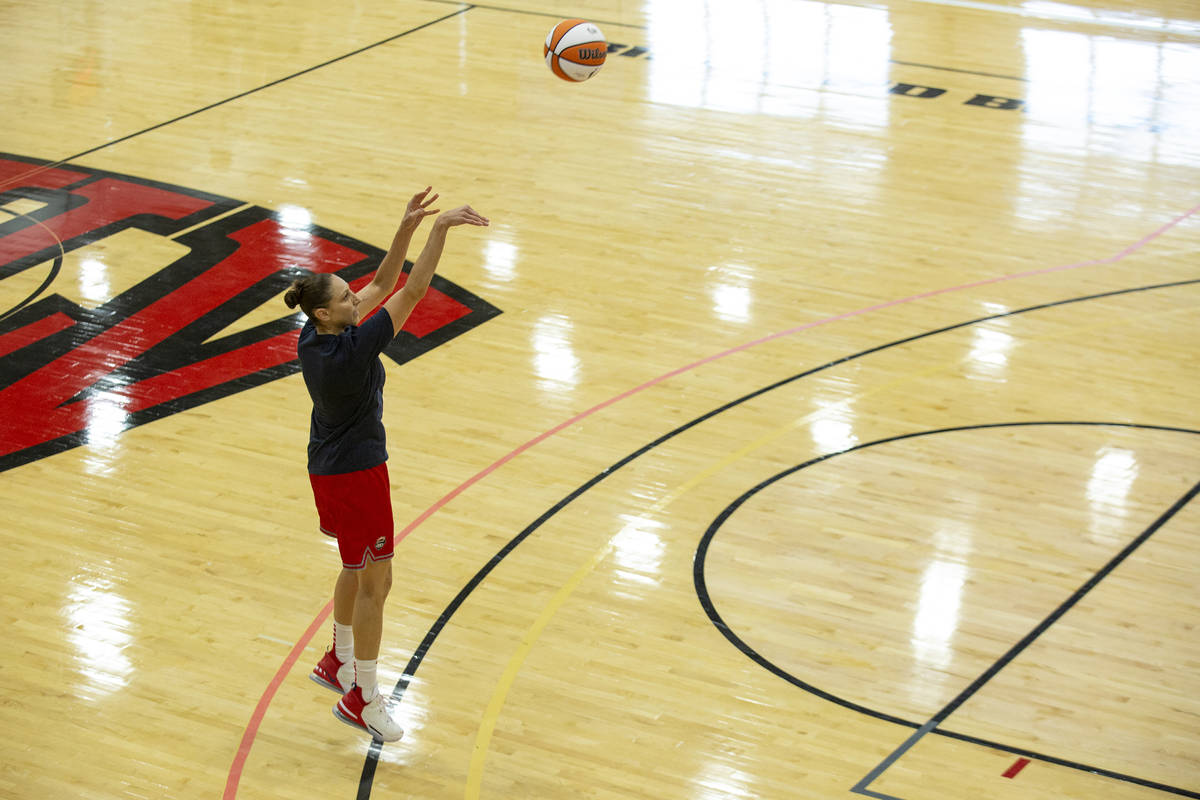 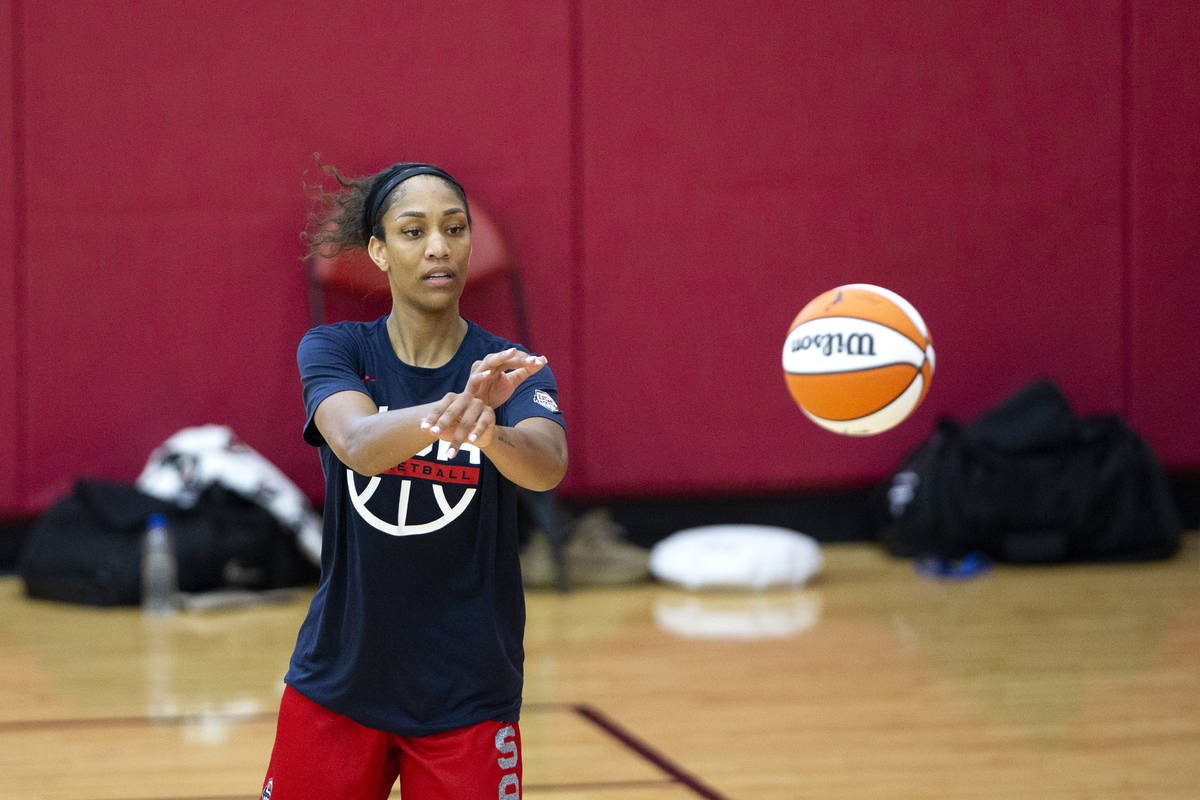 A'ja Wilson, who plays for the Las Vegas Aces in the WNBA, passes the ball during a 2021 USA Basketball Women's National team practice in Mendenhall Center at UNLV on Tuesday, July 13, 2021, in Las Vegas. (Ellen Schmidt/Las Vegas Review-Journal) @ellenschmidttt 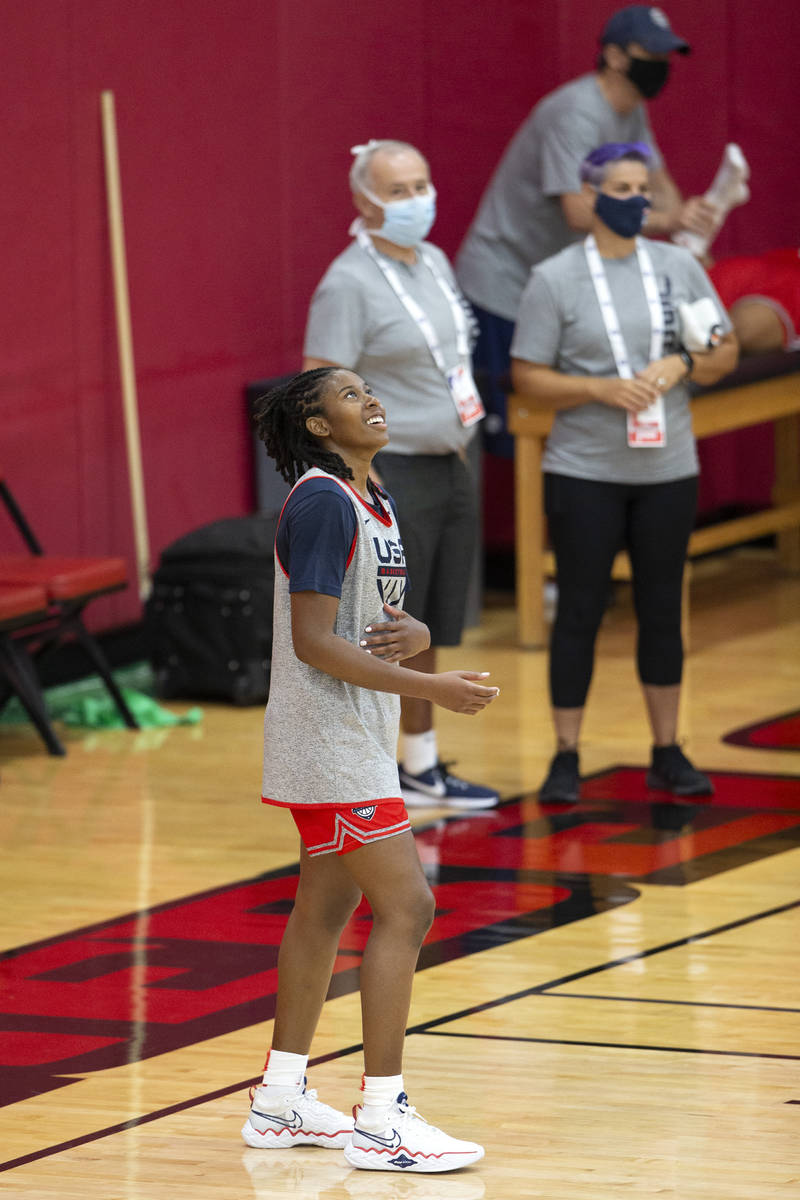 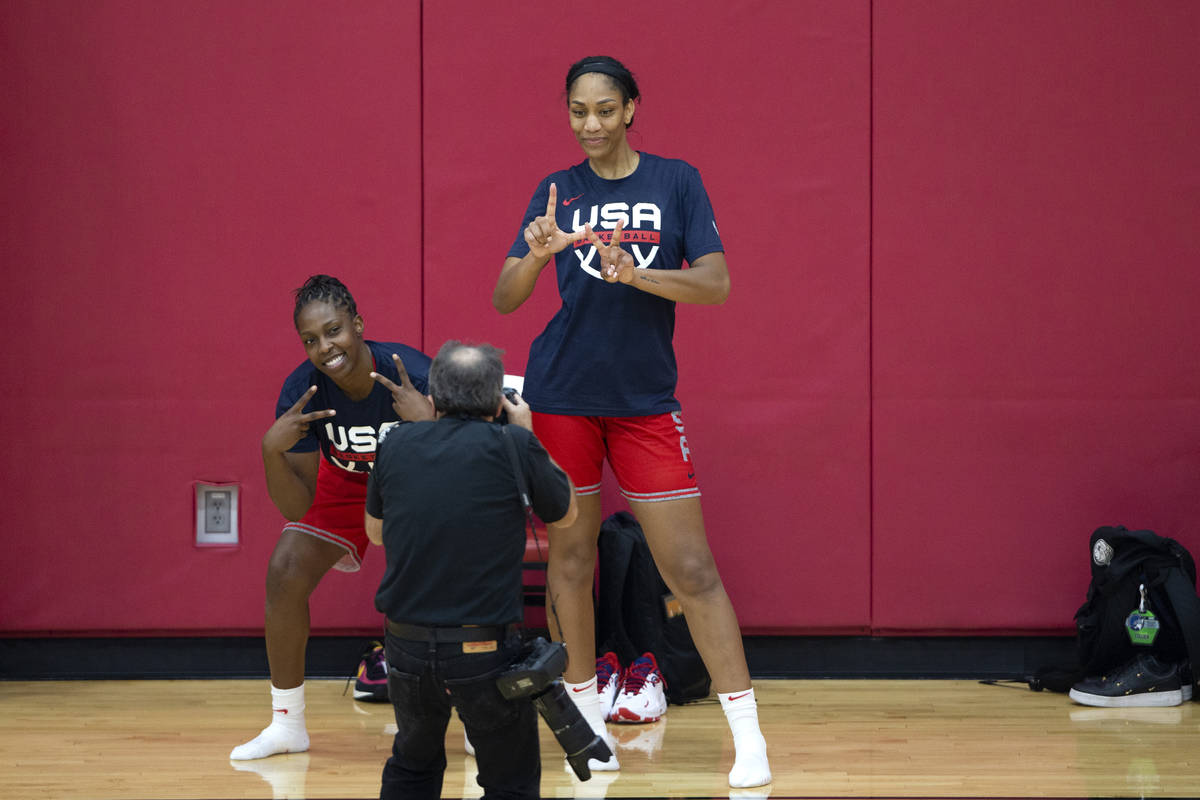 Chelsea Gray, left, and A'ja Wilson, who play for the Las Vegas Aces in the WNBA, pose for photos during a 2021 USA Basketball Women's National team practice in Mendenhall Center at UNLV on Tuesday, July 13, 2021, in Las Vegas. (Ellen Schmidt/Las Vegas Review-Journal) @ellenschmidttt 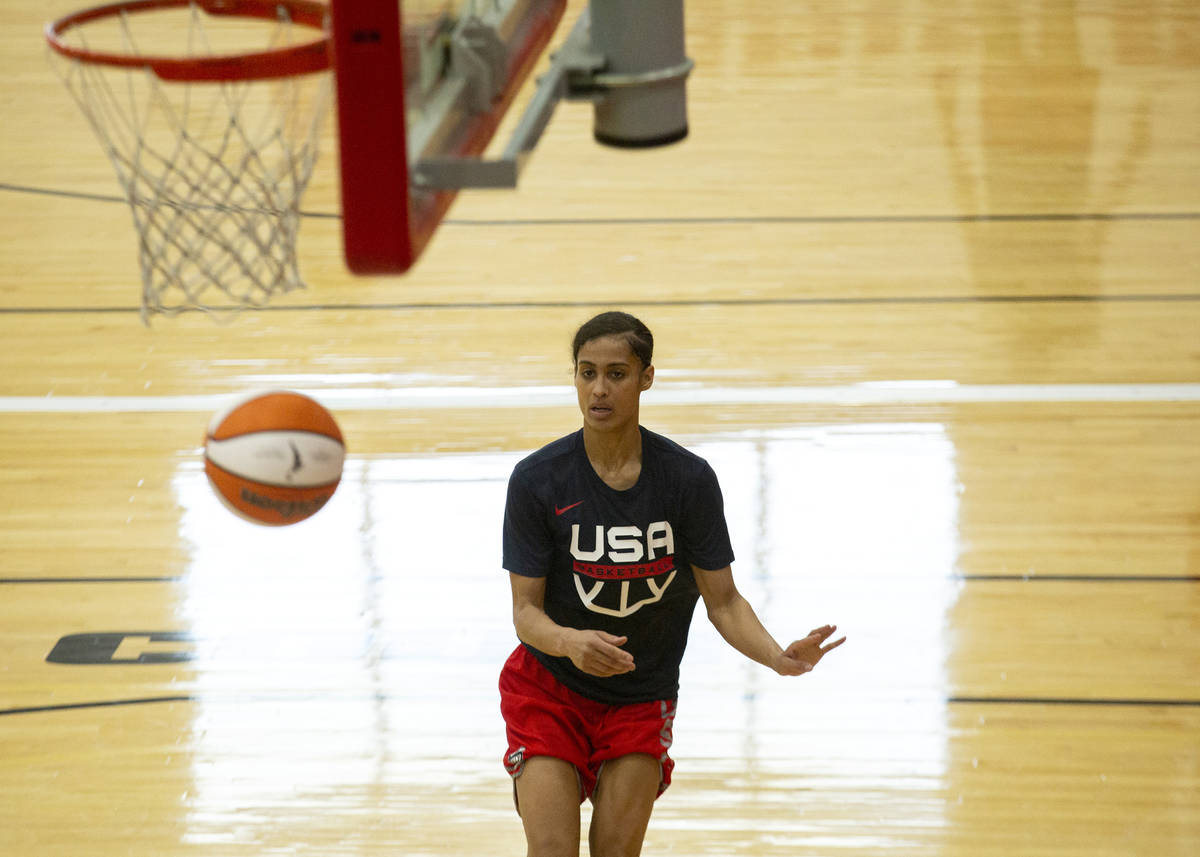 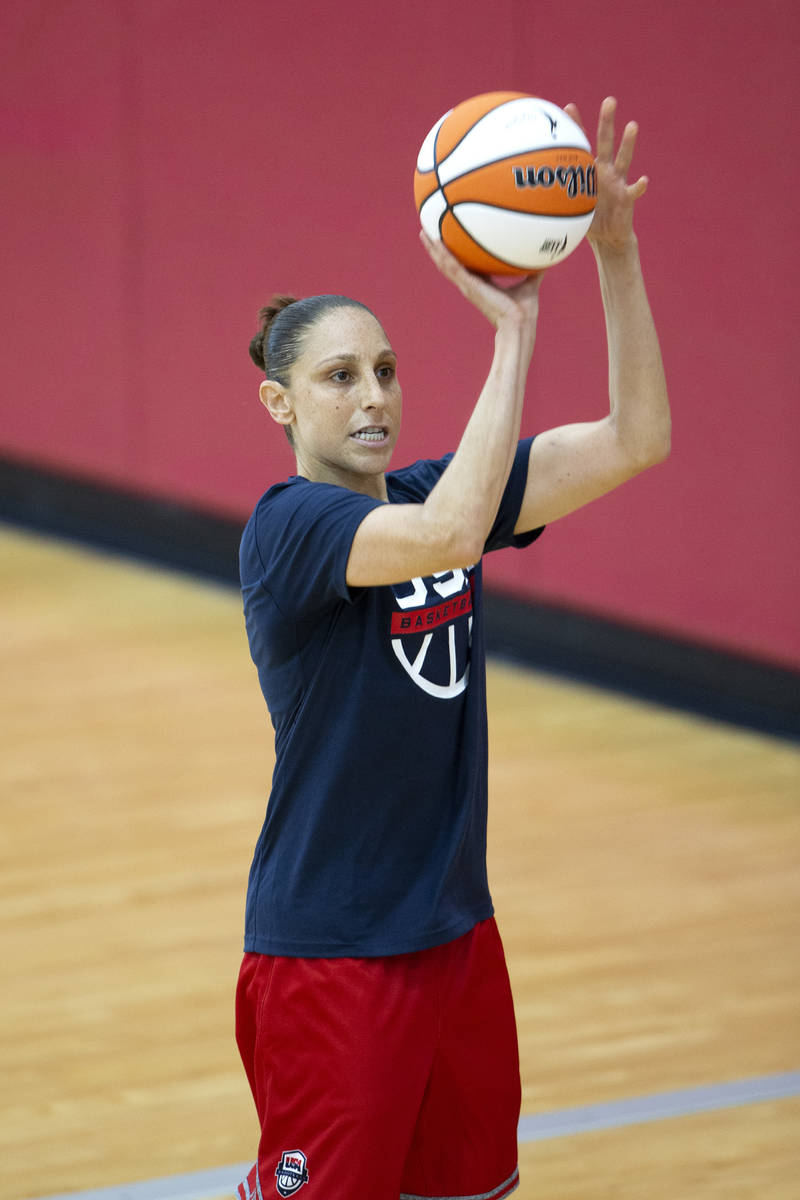 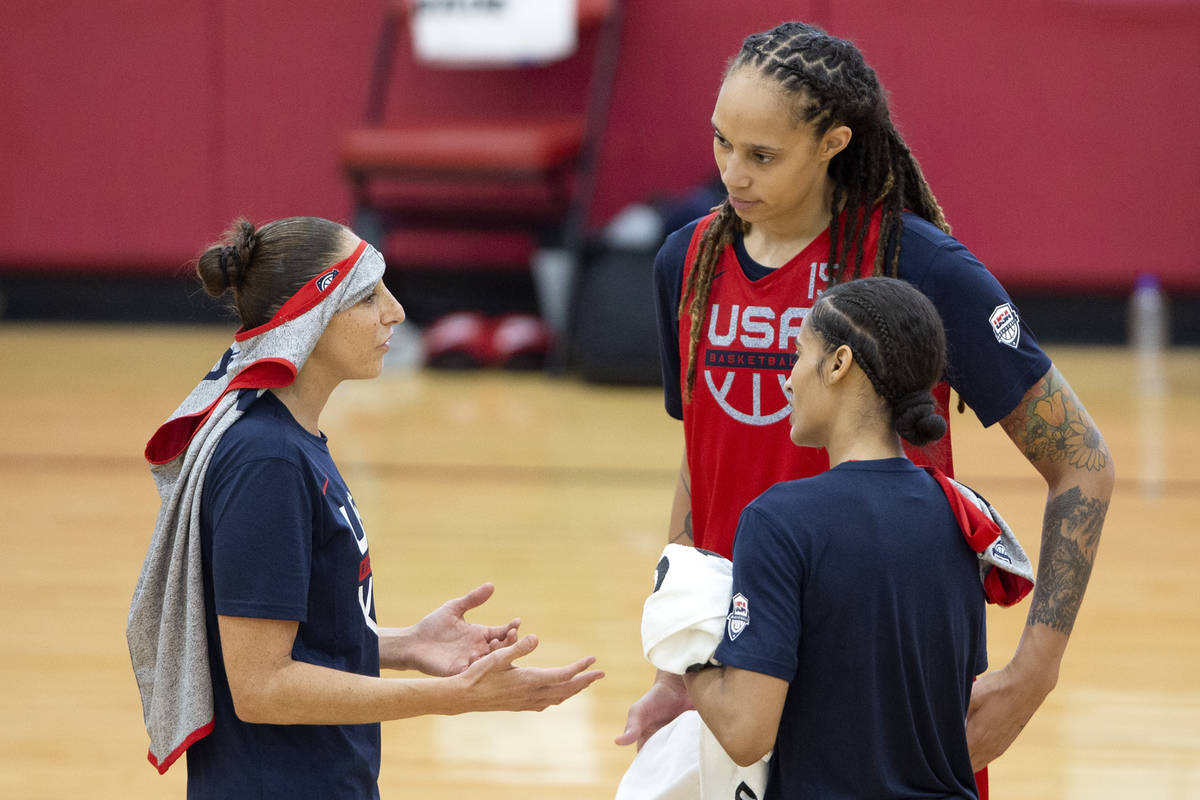 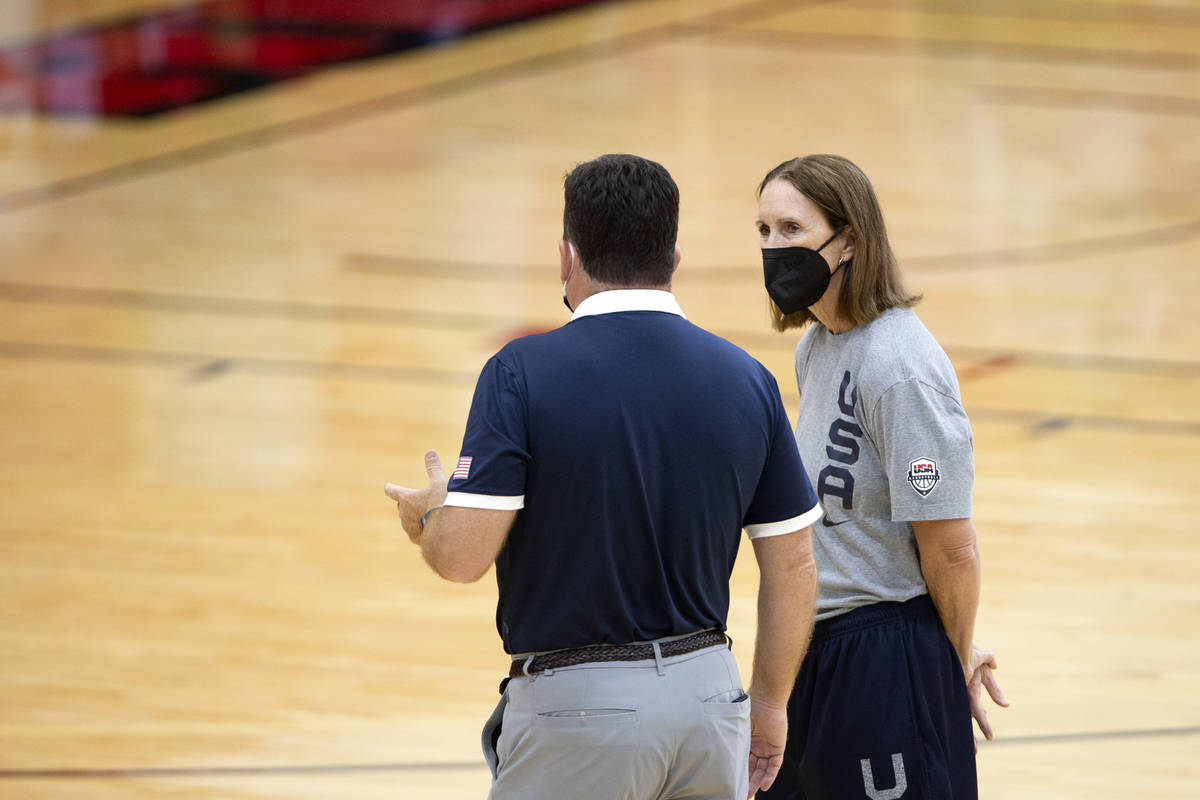 It’s an exhibition game designed to showcase the world’s best basketball players. But don’t tell that to the U.S. Olympic women’s basketball team.

The WNBA All-Star Game on Wednesday is more than fun and games this time around.

“It’s going to be a little more competitive than past All-Star appearances,” Olympian and Aces point guard Chelsea Gray said. “We’re starting a journey to get a gold medal.”

The WNBA All-Star Game at Michelob Ultra Arena pits the Olympic team against a squad comprised of 12 WNBA All-Stars in its first exhibition game before the Tokyo Games. The matchup offers the Americans a tuneup against a group of top players, many of whom are talented enough to warrant wearing the red, white and blue.

The All-Stars get an opportunity to upstage the Americans before the Olympics.

“A lot of times I kind of feel like people forget some of the things I’ve done in the league,” said Connecticut Sun forward Jonquel Jones, a top WNBA MVP candidate playing with the All-Stars. “(My mission is) to have everyone on notice that I belong and that I should be in every conversation. That’s my mindset. That’s how I’ve been moving this season.”

All-Star games tend to have a casual tone. The last WNBA All-Star Game in 2019 certainly did before becoming more competitive in the second half. A team captained by Aces star A’ja Wilson eked out a 129-126 victory over a team captained by Washington Mystics forward Elena Delle Donne at Michelob Ultra Arena.

But this is different because the United States began practicing in Las Vegas this week, leaving the national team little time to prepare for the challenges they will face in Tokyo.

Ask the men’s national team about the challenges that presents.

“International basketball is nothing to overlook,” Olympian and Seattle Storm forward Breanna Stewart said. “These national teams are really good, and they have time together and chemistry together. When you get together with 12 players and you haven’t had much time and these other national teams have, they’re motivated. We know that every time we represent the USA, we have a target on our back.”

The All-Stars don’t necessarily think they have anything to prove, said Chicago Sky forward Candace Parker, once a fixture on the U.S. national team. By virtue of their selection, they know they’re among the world’s best players.

But they also plan on competing with more intensity.

“It’s a game. I’m competitive. It is what it is.” Parker said. “Everybody’s kind of taking that attitude going in. Are we happily walking down the hallways like, ‘Hey, USA Basketball?’ No. But at the end of the day, this is your job, and it’s an honor to be an All-Star.”