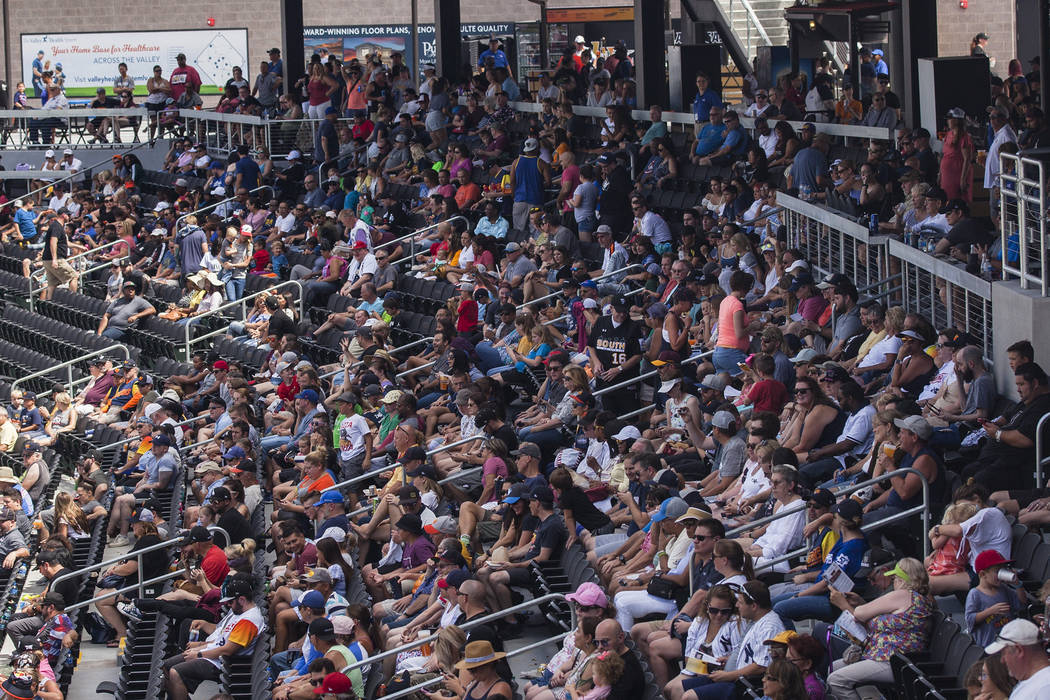 Fans watch the final home game of the season for the Las Vegas Aviators against the Tacoma Rainiers at the Las Vegas Ballpark in Downtown Summerlin in Las Vegas, Monday, Sept. 2, 2019. (Rachel Aston/Las Vegas Review-Journal) @rookie__rae

There wasn’t a celebration hangover in the Aviators’ 3-2 win over the Tacoma Rainiers Monday afternoon in a Labor Day matinee at the Las Vegas Ballpark in Downtown Summerlin.

The night after clinching with Pacific South Division title and a berth in the playoffs against North Division champion Sacramento, the Aviators put on another good show. In front of a crowd of more than 9,500, they brought their season attendance to a record 650,934. year. Even retired 51s mascot, Cosmo, made an appearance.

Unlike the first three games of the series, the Aviators jumped on the Rainiers first and led 2-0, scoring single runs in the second and third innings on runs batted in from recent call-ups Mikey White and Alfonso Rivas.

coma scored first in the three games of the series.

The Rainiers cut the Aviators’s lead to 2-1 in the fourth inning, but a home run by shortstop Jorge Mateo in the bottom of the fifth restored the two-run lead.Tacoma added another run in the eighth inning to cut the final margin to 3-2.

With their best-of-five playoff series set to begin Wednesday in Sacramento, Aviators manager Fran Riordan limited the five pitchers he used to no more than three innings.

Starting pitcher Jharel Cotton was used the most, going three full innngs. He allowed four hits while walking one and striking out two. . Reliever Miguel Romero pitched a scoreless ninth to earn the save, and Trey McNutt, Brian Schlitter and J.B. Wendelken effectively handled the middle innings.