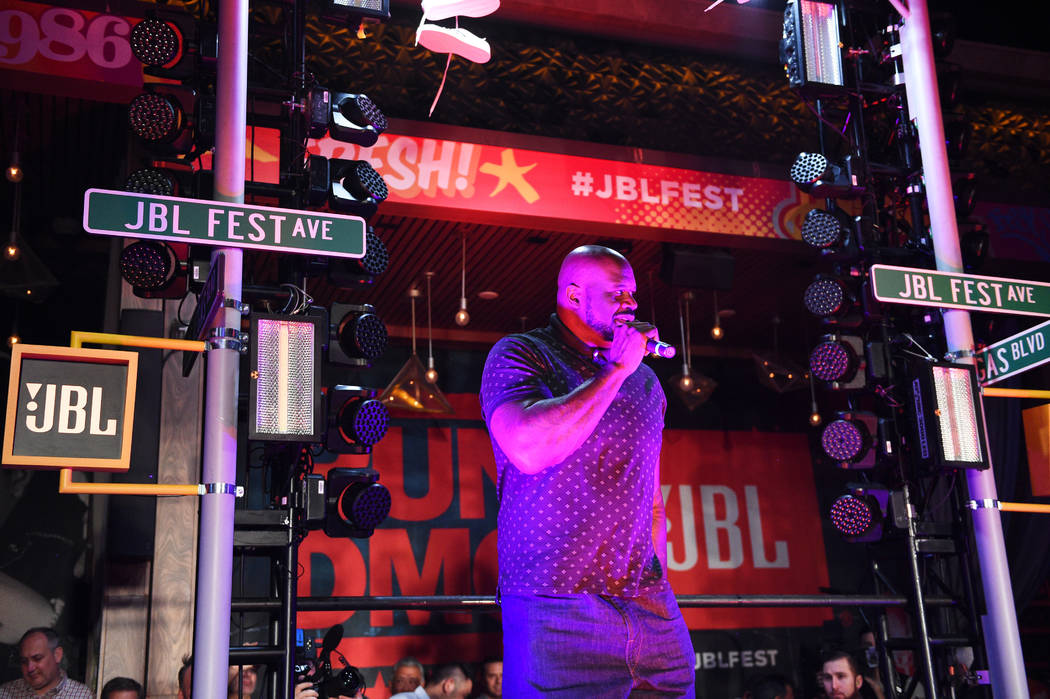 Shaquille O'Neal aka DJ Diesel gets the party started at JBL REMIX at Omnia Nightclub at Caesars Palace on October 09, 2019 in Las Vegas, Nevada. Photo by David Becker/Getty Images for JBL. 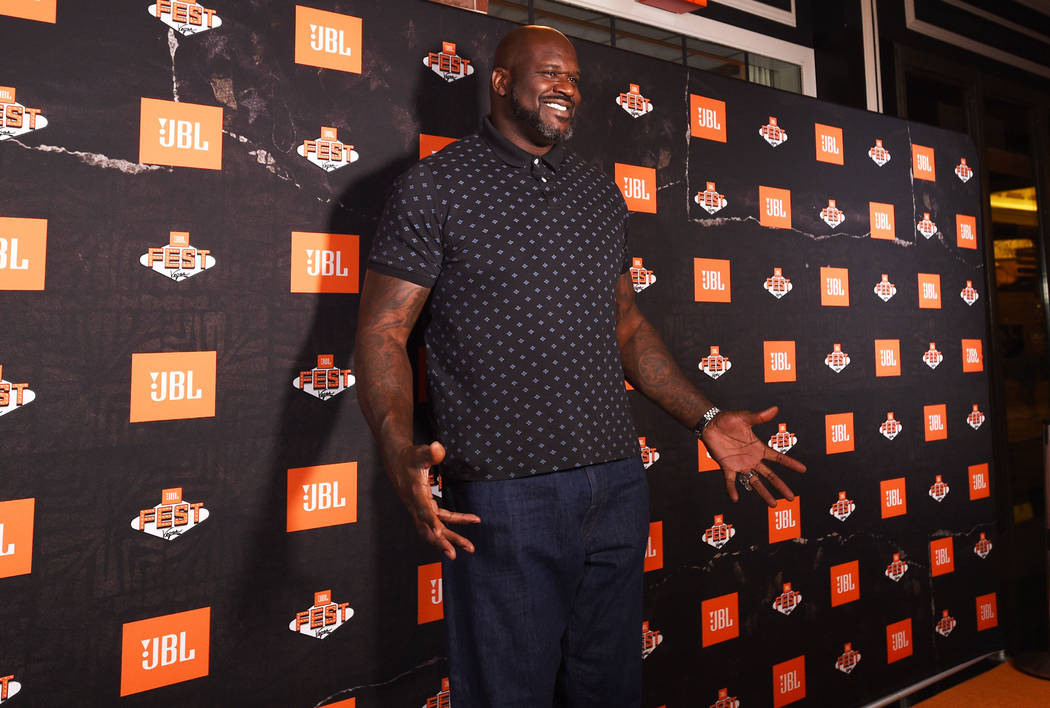 Shaquille O'Neal arrives at Omnia Nightclub for night one of JBL Fest 2019 at Caesars Palace on October 9, 2019 in Las Vegas, Nevada. (Photo by David Becker/Getty Images for JBL) 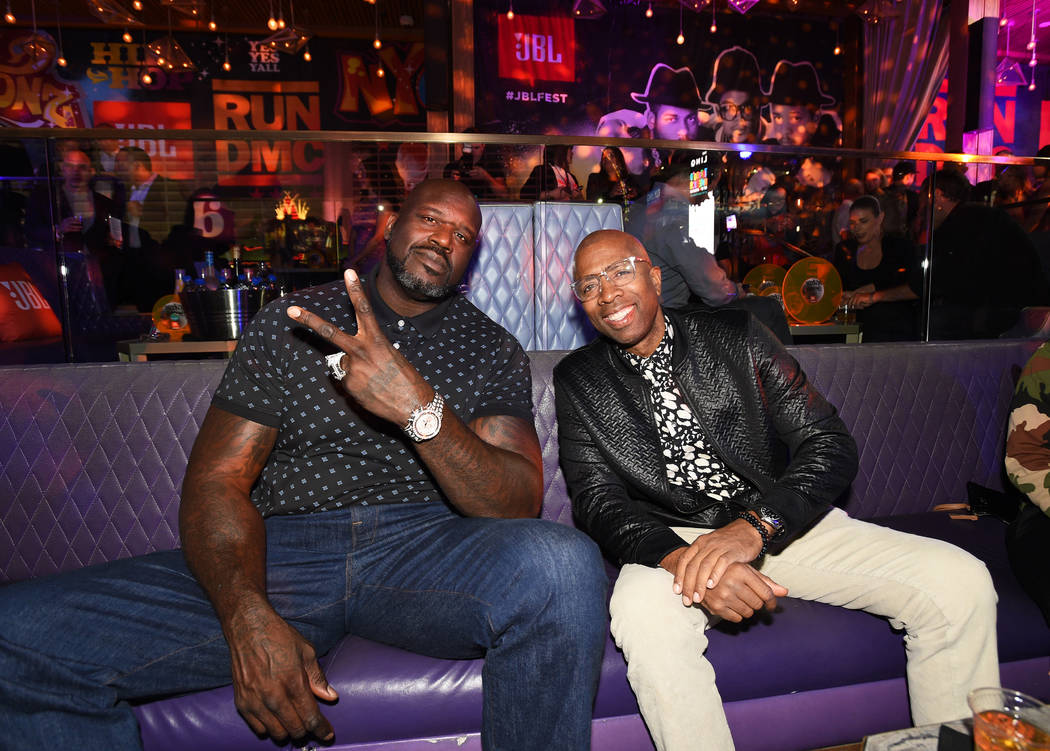 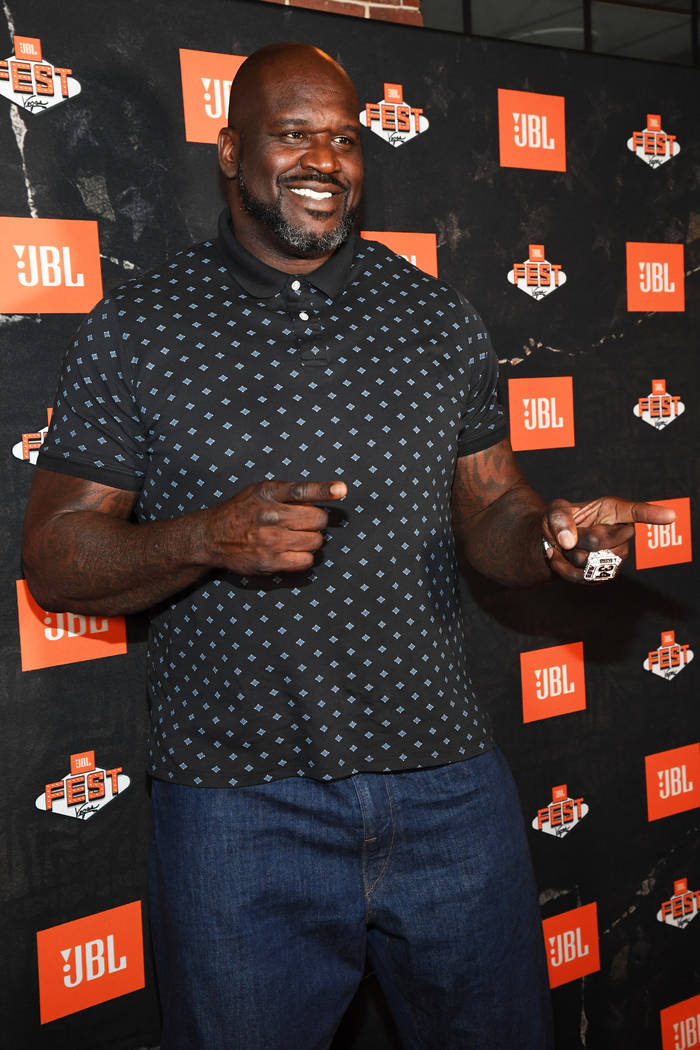 Shaquille O'Neal arrives at Omnia Nightclub for night one of JBL Fest 2019 at Caesars Palace on October 9, 2019 in Las Vegas, Nevada. (Photo by Kevin Mazur/Getty Images for JBL) 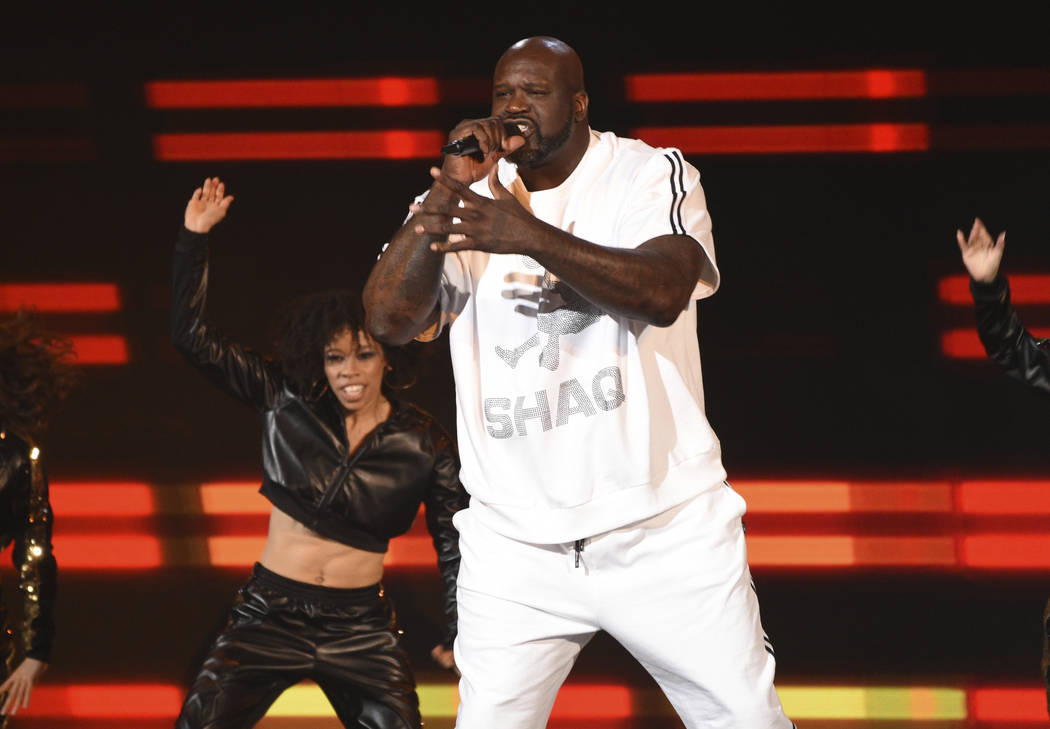 CORRECTS BYLINE TO CHRIS PIZZELLO INSTEAD OF RICHARD SHOTWELL - Host Shaquille O'Neal performs at the NBA Awards on Monday, June 24, 2019, at the Barker Hangar in Santa Monica, Calif. (Photo by Chris Pizzello/Invision/AP) 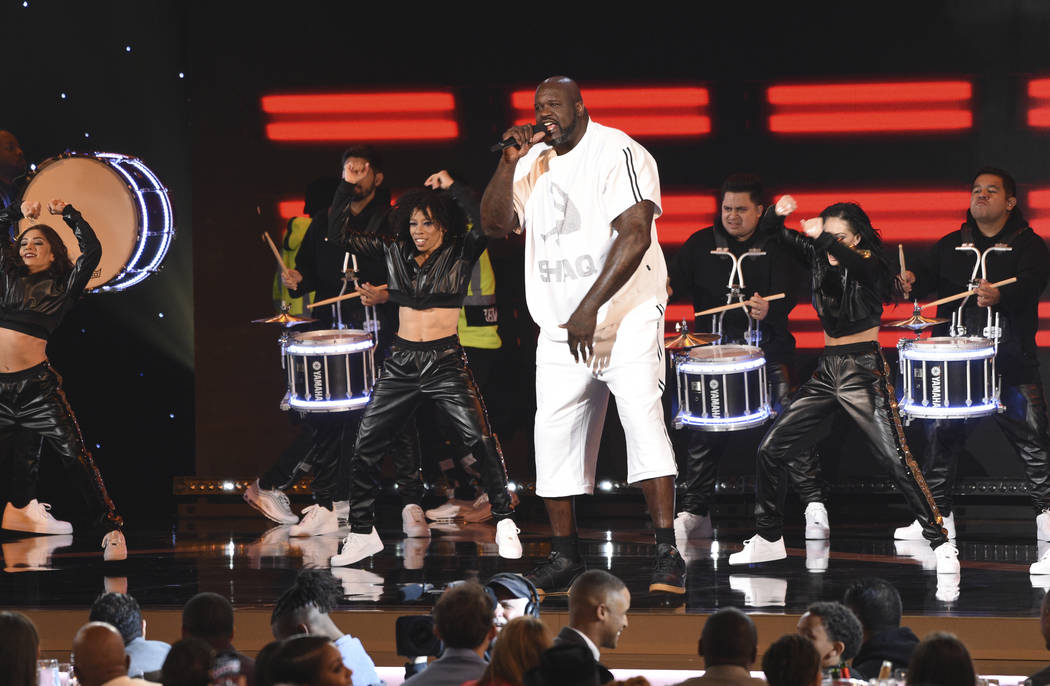 Host Shaquille O'Neal performs at the NBA Awards on Monday, June 24, 2019, at the Barker Hangar in Santa Monica, Calif. (Photo by Chris Pizzello/Invision/AP) 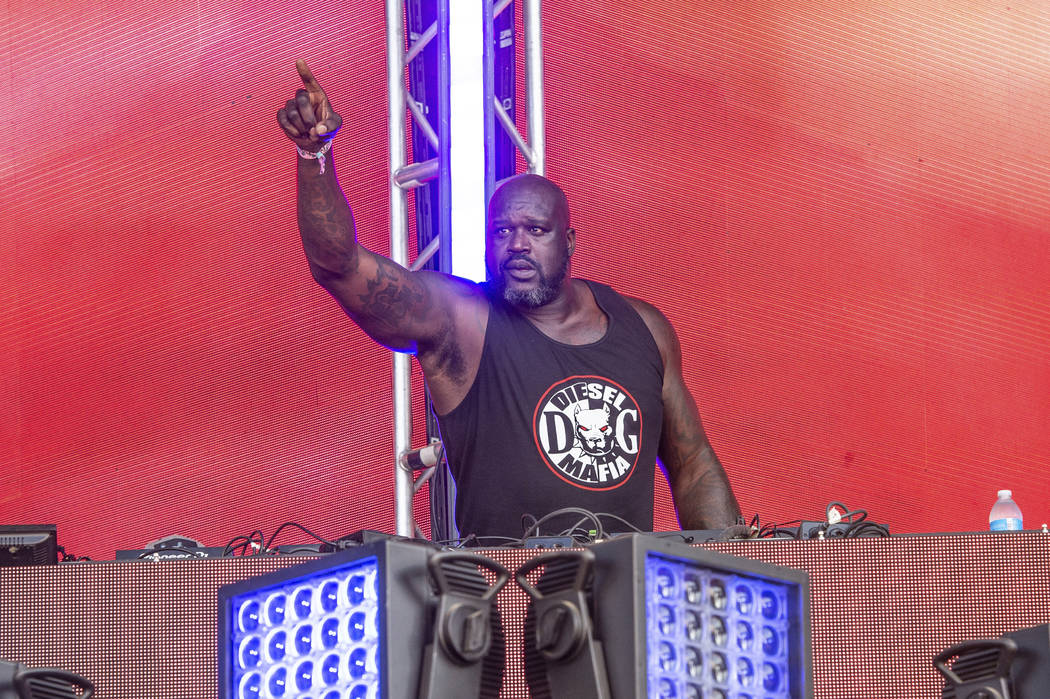 DJ Diesel performs on day four of Lollapalooza in Grant Park on Sunday, Aug. 4, 2019, in Chicago. (Photo by Amy Harris/Invision/AP) 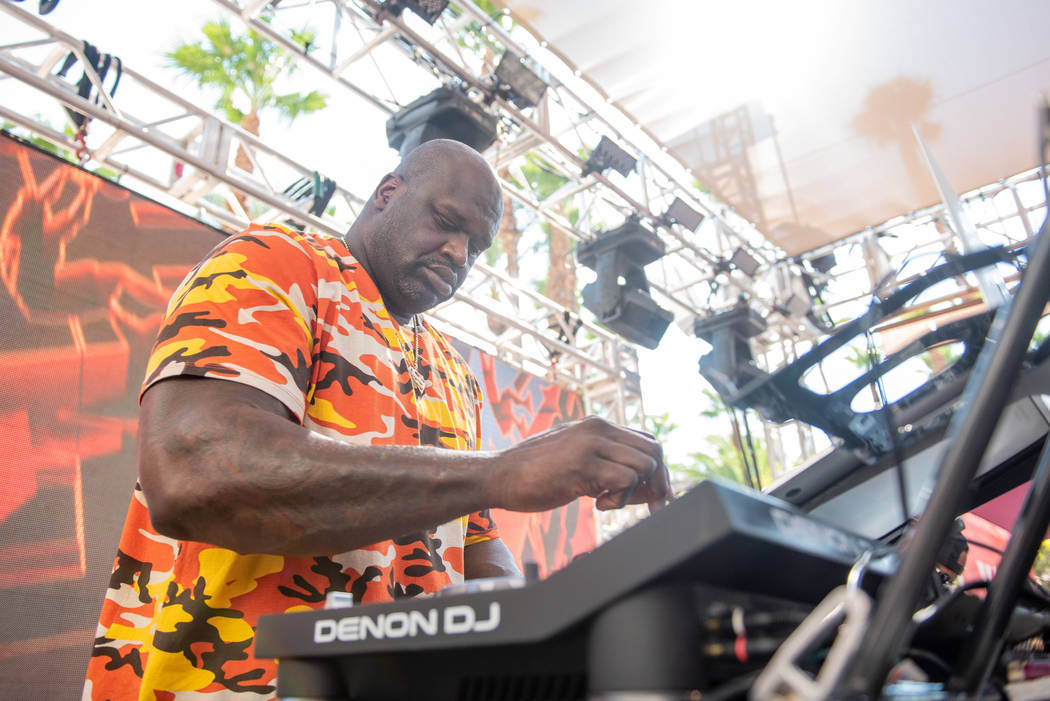 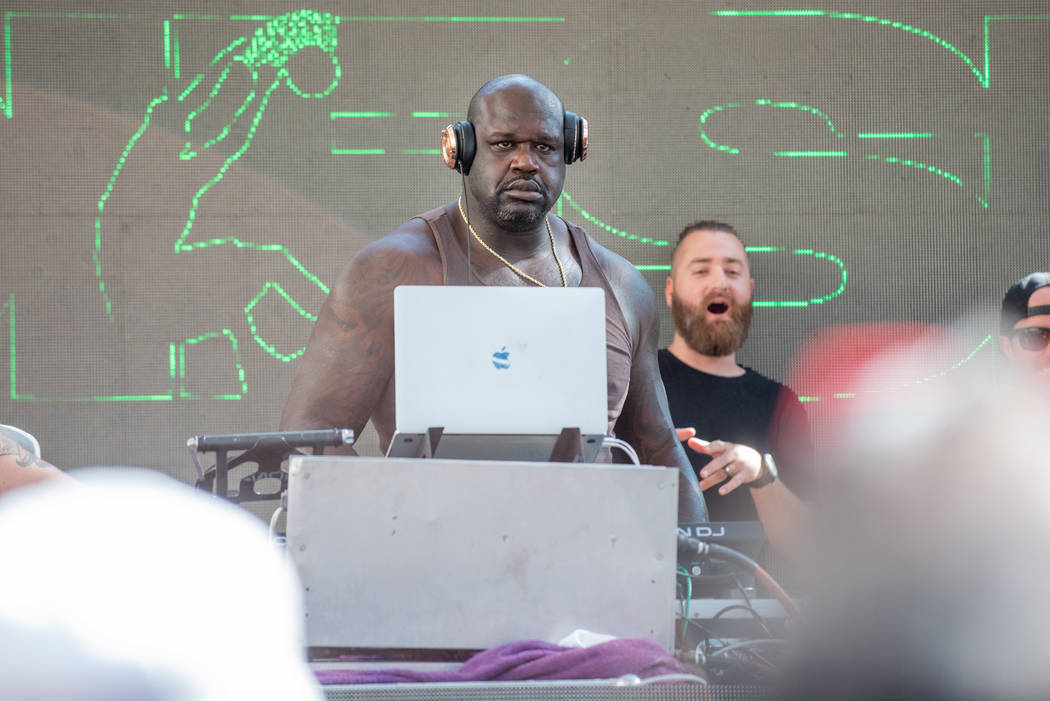 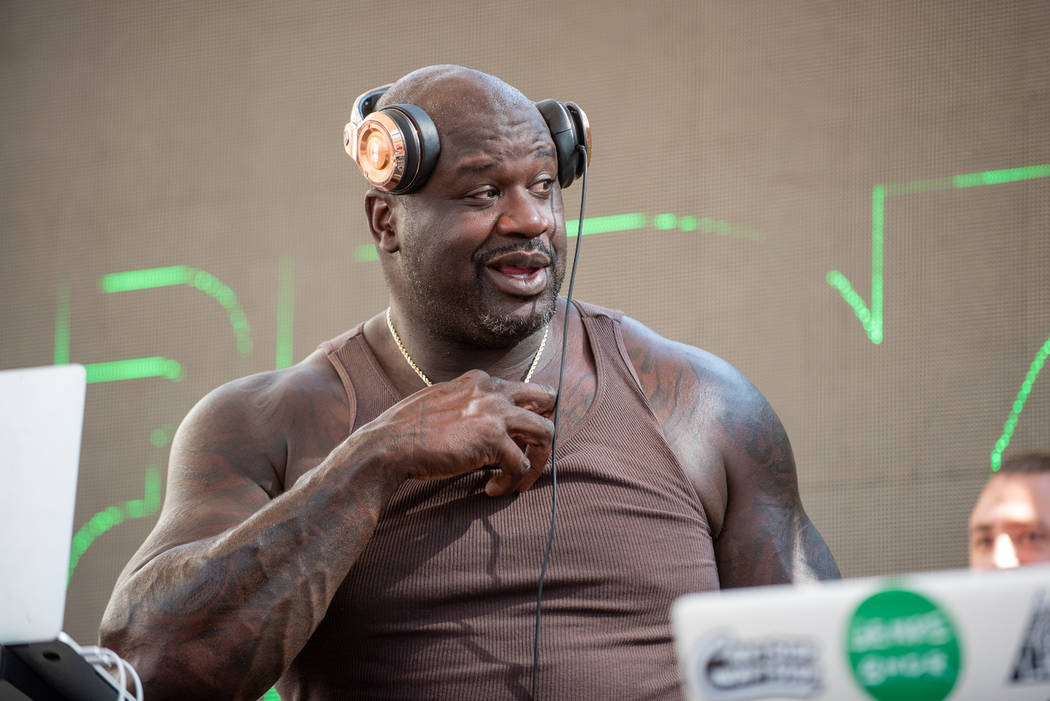 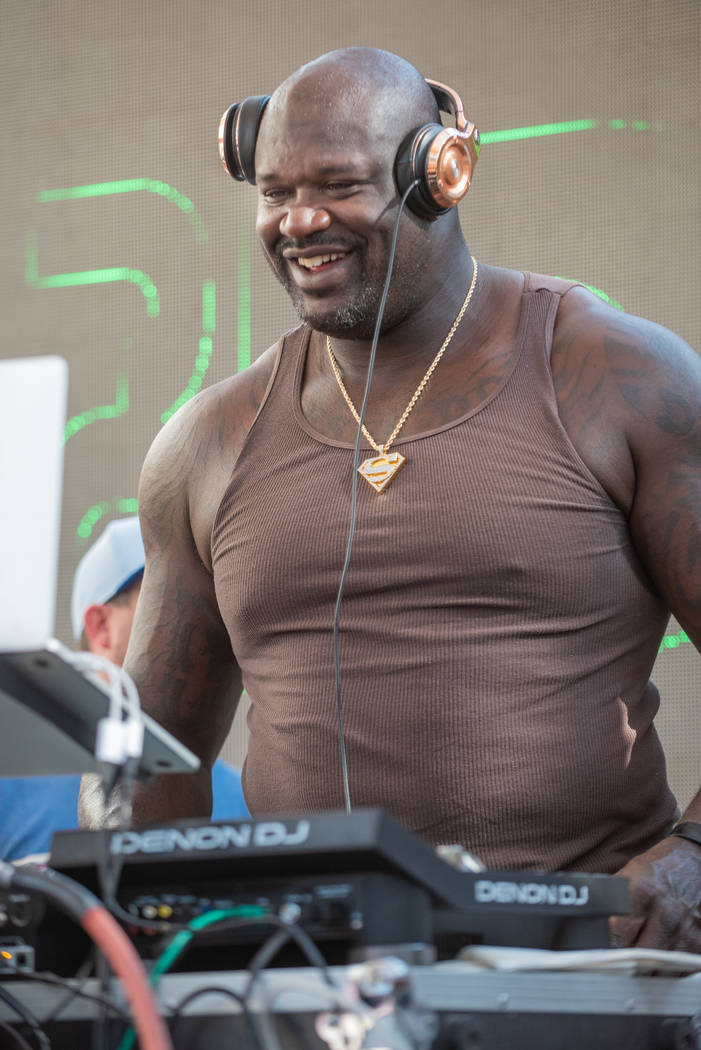 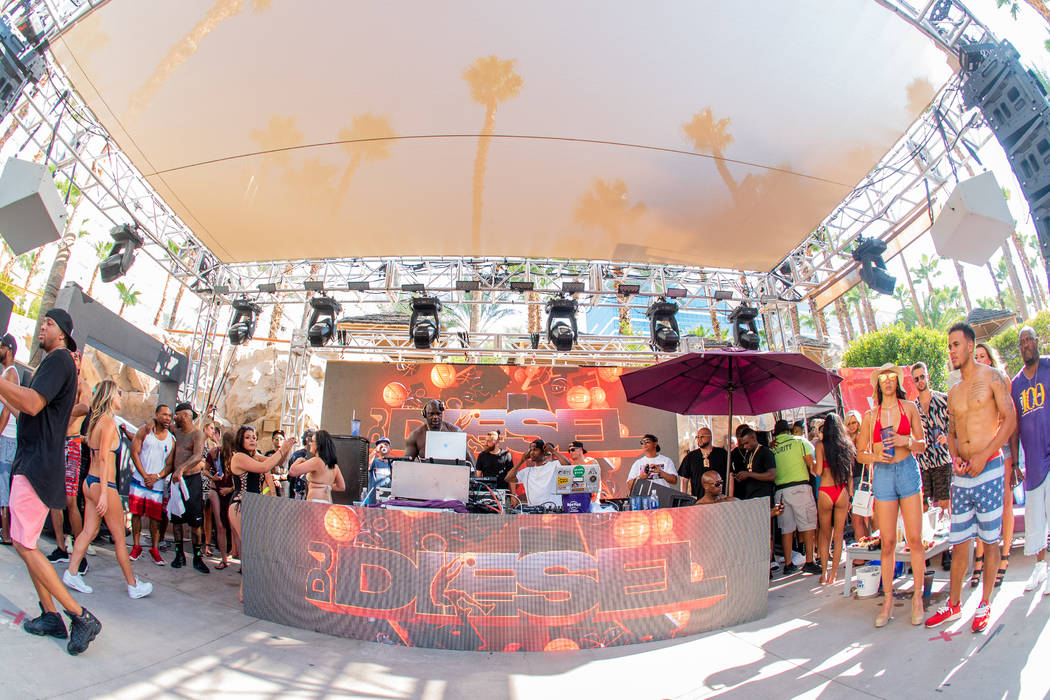 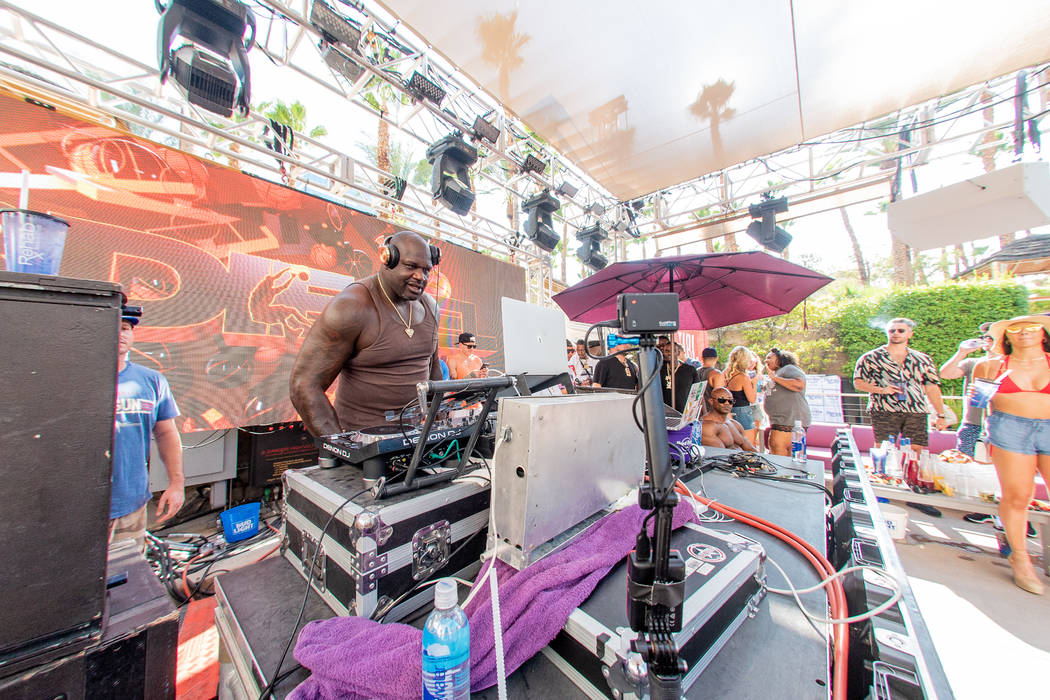 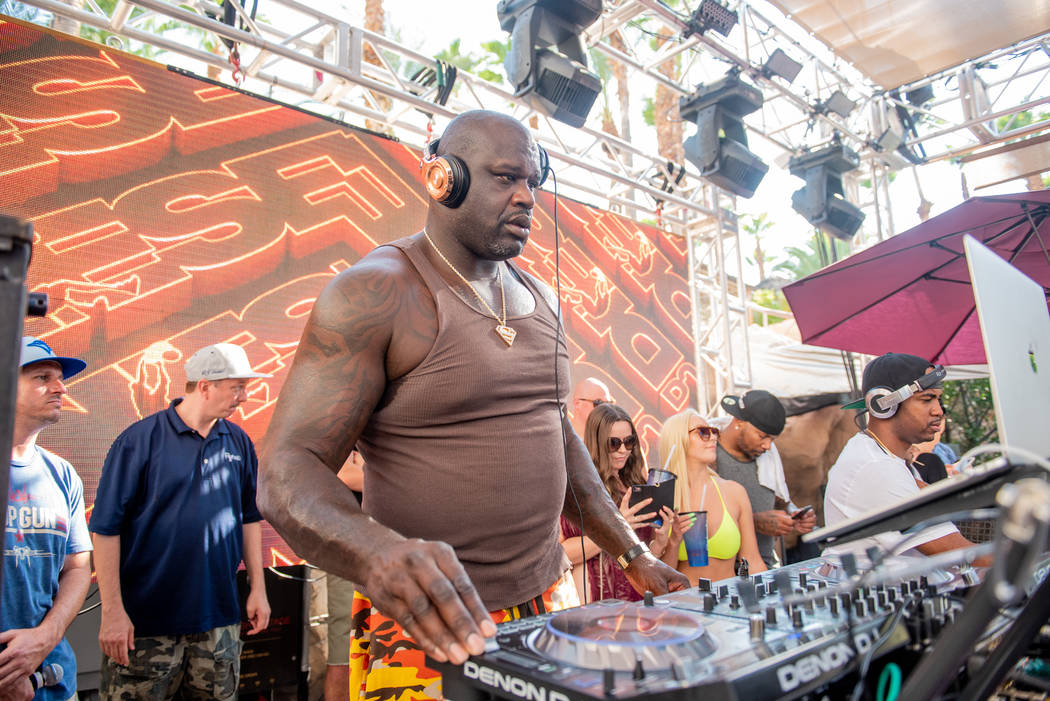 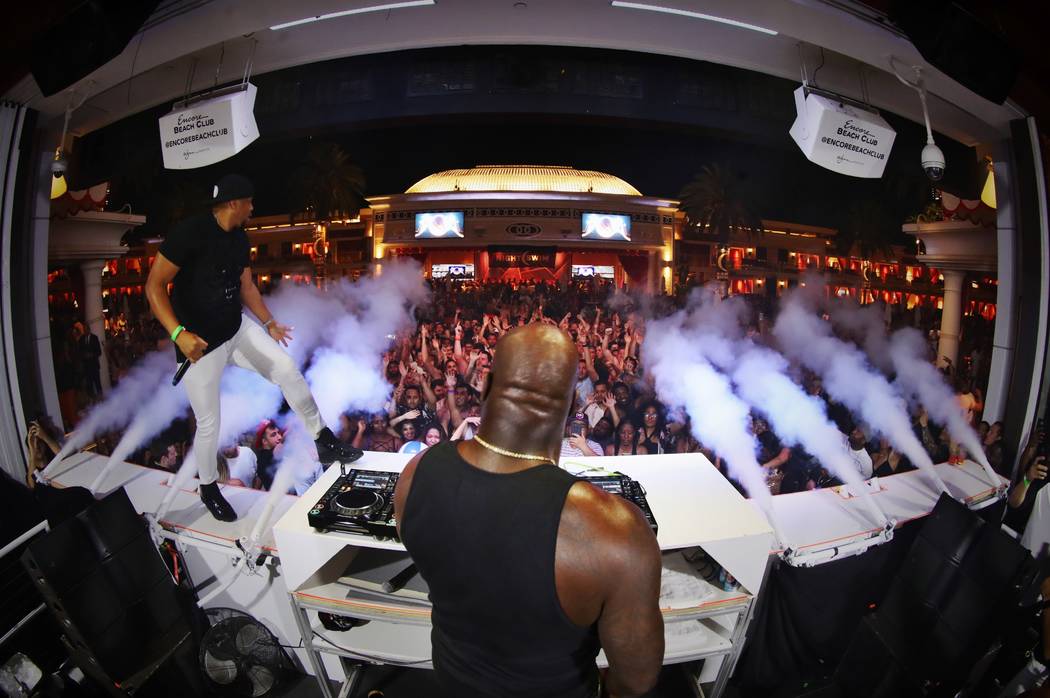 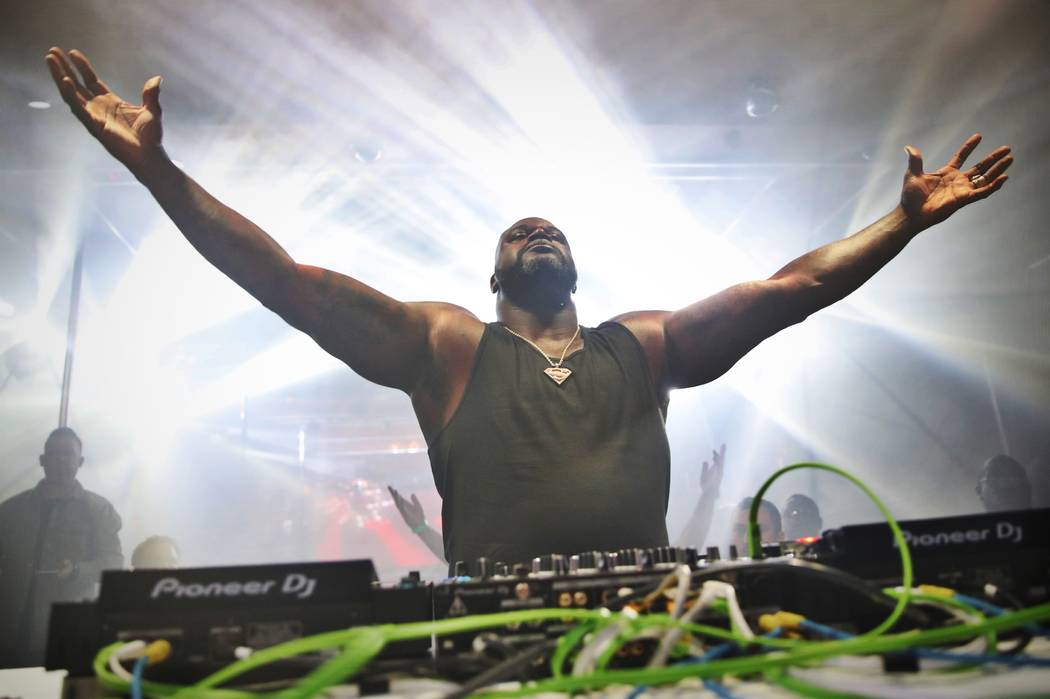 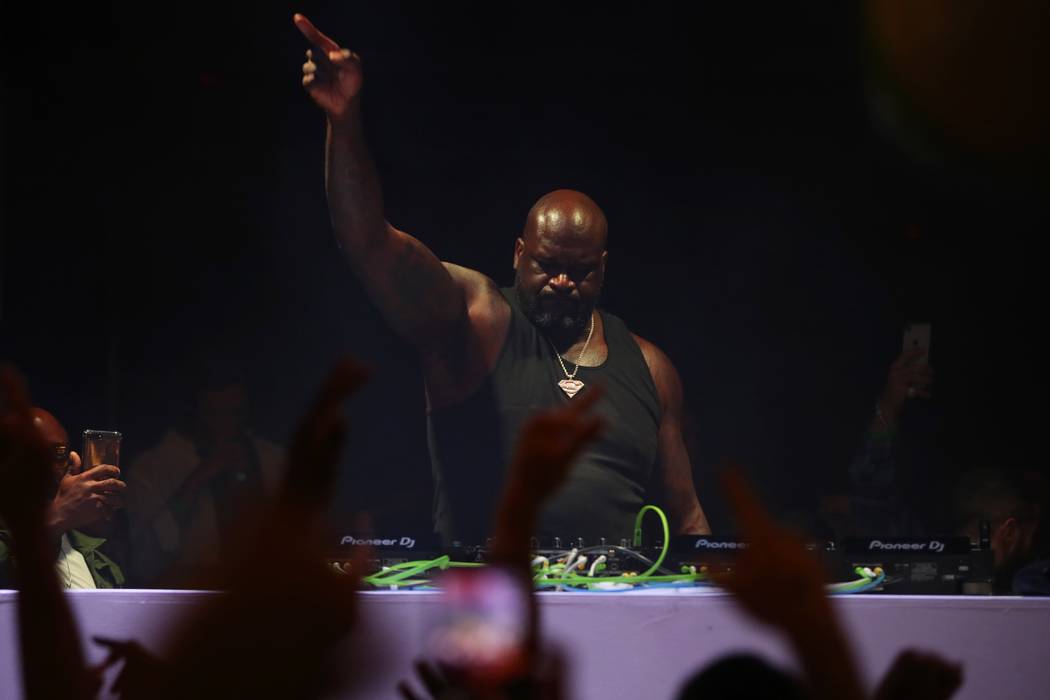 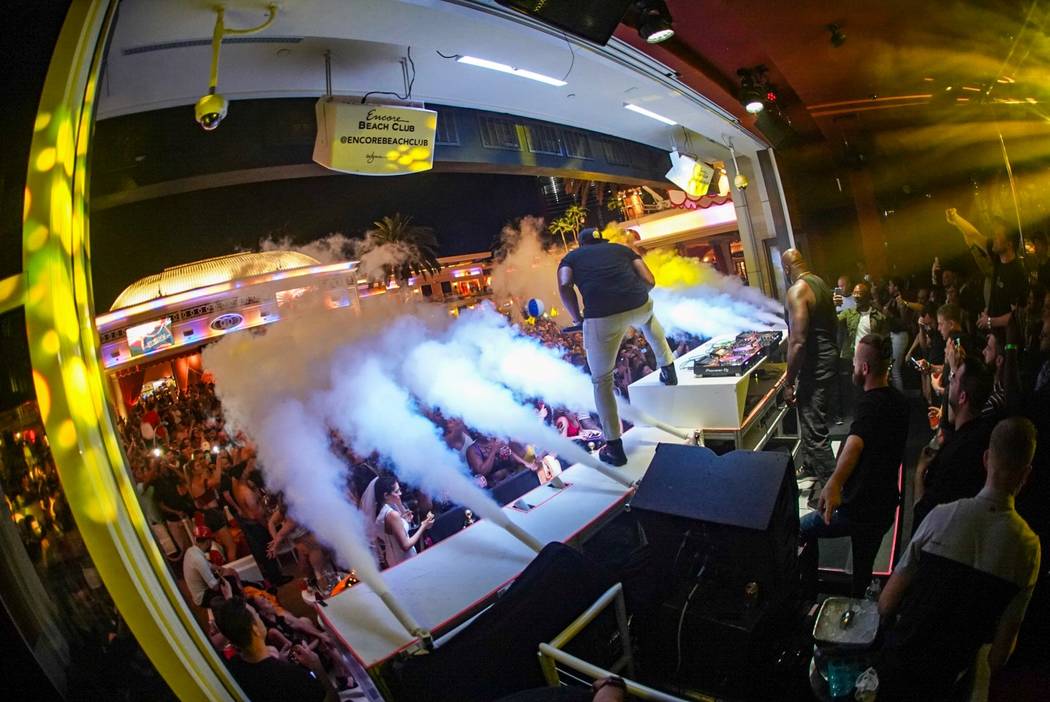 He’s a man of many monikers.

Superman, the Big Daddy and the Big Aristotle are just a few.

But this week, former NBA center Shaquille O’Neal was DJ Diesel, the disc jockey who spins and mixes records at some of the world’s most eclectic parties.

And a brand ambassador for the company JBL, which manufactures audio equipment and holds its annual JBL Fest in Las Vegas.

“When you go to festivals with all these top DJs, people just want to jam out,” said O’Neal, who began DJing in 1988 and was inducted into the Naismith Memorial Basketball Hall of Fame in 2016. “I definitely take it seriously because when I’m performing and you’re paying money to watch me perform, it’s my duty to give you your money’s worth and more.”

The Review-Journal spoke with O’Neal on Oct. 9 before a Run-D.M.C. concert atop Omnia during JBL Fest. He talked about his affinity for music, his work as a DJ and his career as the MC who rapped alongside legendary recording artists like Notorious B.I.G., Nas and Jay-Z, among others.

He also touched on his playful lyrical back-and-forth with Portland Trail Blazers All-Star guard Damian Lillard, and the art of producing a tasteful dis record.

RJ: What’s the most rewarding part of making music?

DJ Diesel: To DJ and see 100,000 kids jump up and down. … It’s like being in a game in Chicago against (Michael) Jordan, and everything is going. Free throws. Fadeaways. Dunking on people. For me, now, (DJing) gives me the gratification of a Game 7. I’m an adrenaline junkie. High school, college, AAU, Olympics. I live on adrenaline.

RJ: How does your creative process differ as a DJ compared when you are an MC?

DJ Diesel: It’s the same thing. No mistakes. Focus. You’ve got to know what to play and when to play it. The crazy thing about all my shows, I have to look at the crowd first. … You have to be able to make adjustments on the fly.

RJ: During your career as a musician, is there one particular experience or moment that was a little more seminal or influential for you?

DJ Diesel: When I went platinum, I made money but it was nothing. I said “You know what, I’m going to continue my dreams of being a rapper. But let me just focus on rapping with some of my favorite artists.” When I was in the studio with (Notorious) B.I.G., I don’t care about how many records I’ve sold. I’ve made it. “Biggie, how much do you charge me?’” (He says) “Nothing, man, I love you.” When I’m getting in the studio with Nas and Lord Tariq and Peter Gunz and Erick Sermon, Redman, DJ Quik, Snoop (Dogg) and they don’t charge me, and they see that I respect their craft. They say, “Yeah, we’ll do it.”

DJ Diesel: I just wanted to rap with my favorite people. And I did that. Everybody I called, nobody charged me. … If you don’t think I haven’t freestyled for Big and Jay-Z, you’ve got another thing coming because they have reputations, too. They were like, “Let me hear something.” And I (snaps fingers). (They say) “Okay, I like that. We’re good to go.” I know if I didn’t have bars it would have been wack. They’ve got to protect their image, too. But nobody has ever told me “no.” And I’ve been with all the legends.

RJ: What did you take away from your work with artists of that caliber?

DJ Diesel: They taught me that I need to focus a little more. Jay-Z and Biggie came in there with no pad, listened to the beat. “All right, I’m ready.” (Record in) one take. … It was unbelievable. No pen. No pad. It’s crazy. Nas is real quick, too. Just writing words. Boom, boom, boom, boom, boom, boom. And then just kill it. Those guys are like perfectionists. DJ Quik, Snoop (Dogg), all the guys I’ve worked with. The reason why they are the best is because they really are the best. They really put a lot of work into it.

RJ: How cool is it to see more athletes making music?

RJ: Your back-and-forth with Damian Lillard made a lot of noise. Were you surprised he said he’s a better rapper than you?

DJ Diesel: I was kind of surprised, but it’s all about competition. I think we’re bringing the essence of hip-hop back, believe it or not. Two basketball players. That’s how it all started for me. … It’s not a disrespectful thing. He can flow. He’s got bars, but if you say you’re a better writer than me, I’m going to write a paper, you’re going to write a paper, and we’re going to let the editor decide who’s the better writer. When you say you’re a better rapper, hey. I’m just having some fun with it. … But I’m done with it.

RJ: What is the anatomy of a good dis record?

DJ Diesel: You have to say stuff that stings without going too personal. The most disrespectful dis record of all was 2Pac going at Biggie, “Hit ‘Em Up.” That was crossing the line. It was brutal. … I’m not going to get personal. I’m not going to attack his family. … But when you’re an MC, you’ve got to be clever in the words. I retired. I like him. He’s good…I did my two (dis tracks), my mama called me and said, “Cut it out.” I’m just going to focus on DJing now.