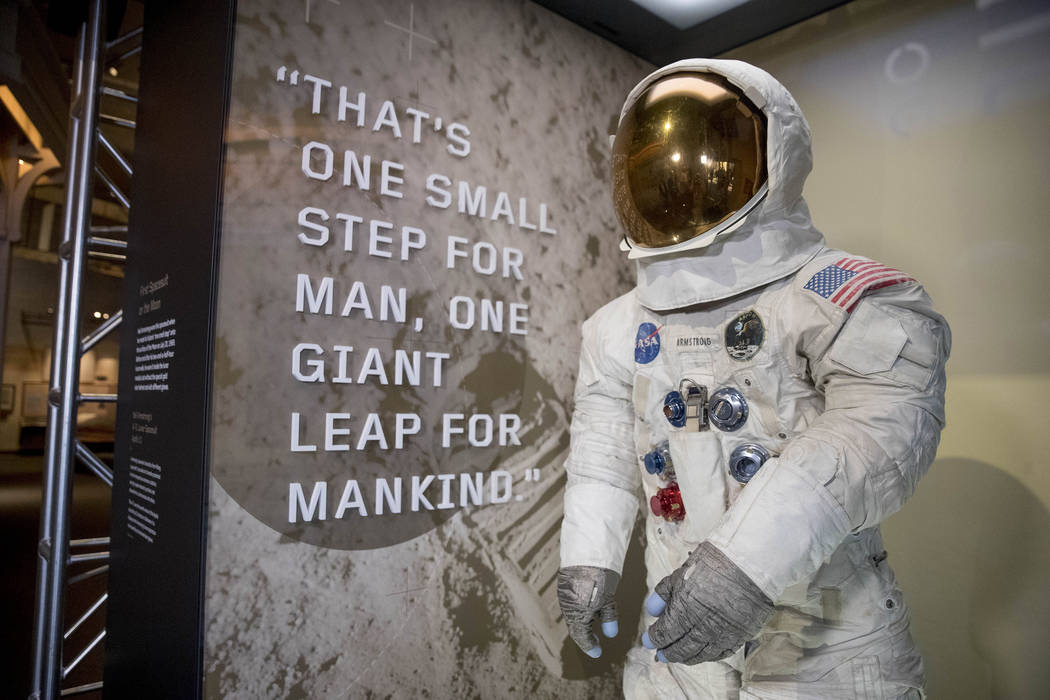 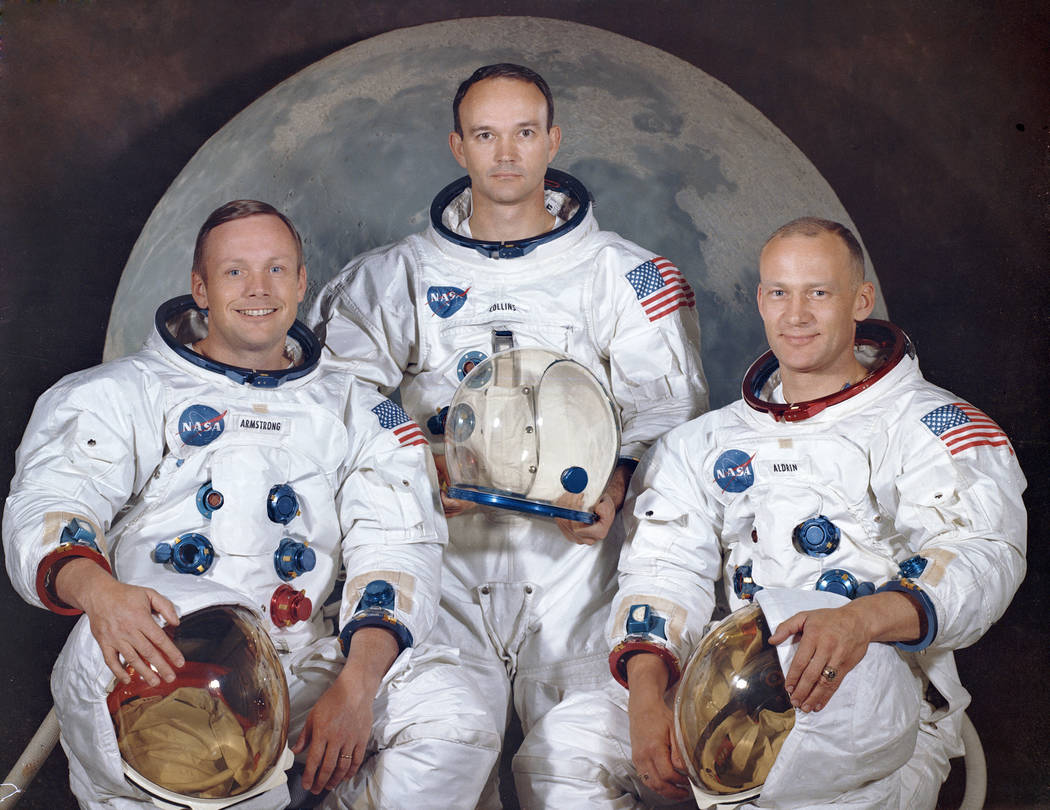 The crew of the Apollo 11, from left, Neil Armstrong, commander; Michael Collins, module pilot; Edwin E. "Buzz" Aldrin, lunar module pilot on March 30, 1969. Apollo 11 was the first manned mission to the surface of the moon. (NASA via AP) 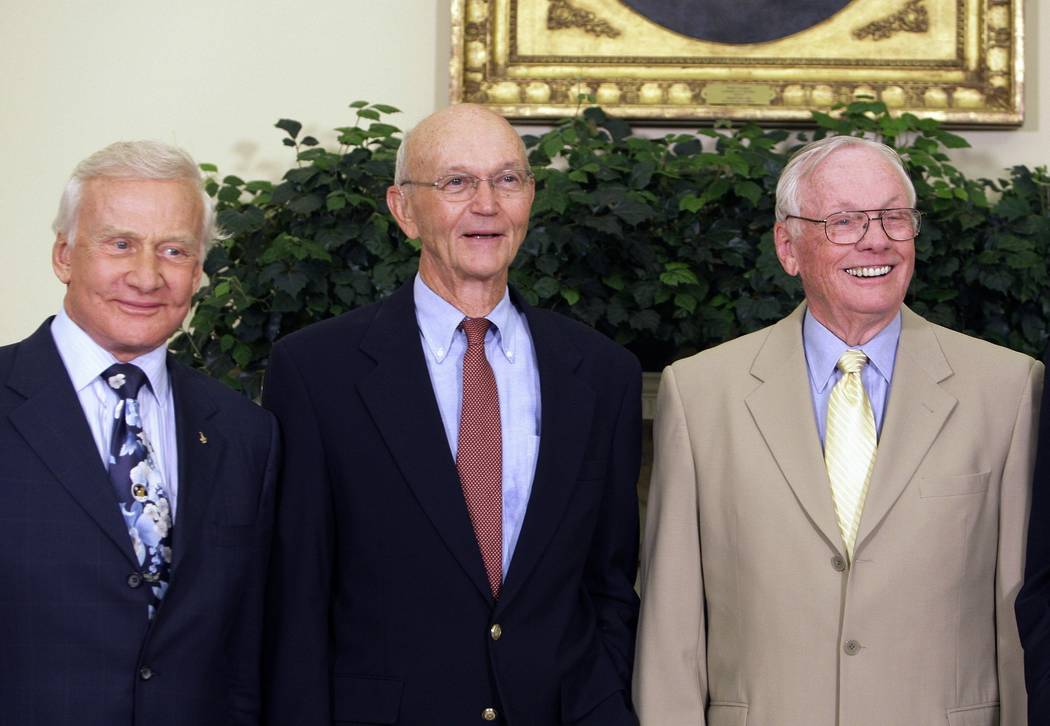 Apollo 11 astronauts, from left, Buzz Aldrin, Michael Collins and Neil Armstrong stand in the Oval Office at the White House in Washington on July 20, 2009, on the 40th anniversary of the mission's moon landing. (AP Photo/Alex Brandon) 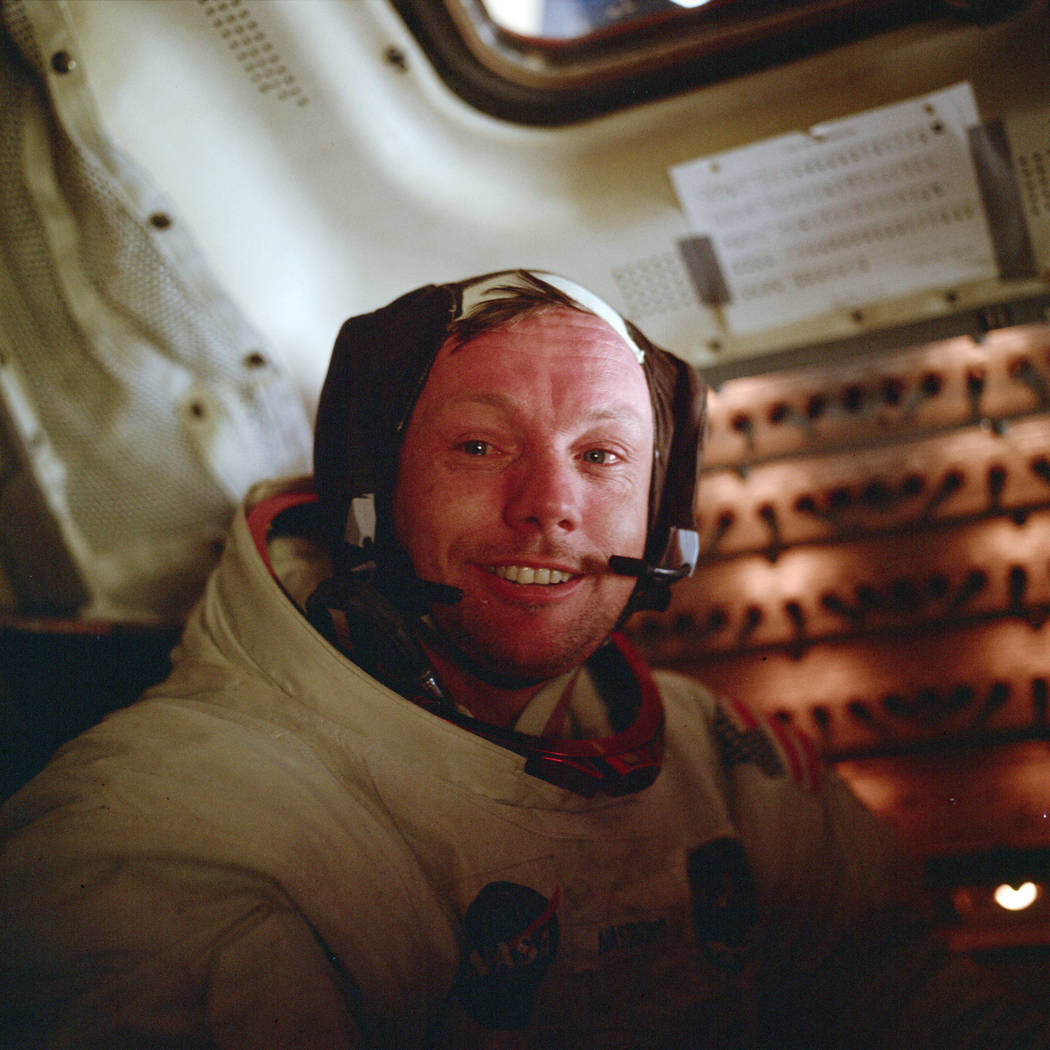 Astronaut Neil Armstrong, Apollo 11 commander, sits inside the Lunar Module after he and Buzz Aldrin completed their extravehicular activity on the surface of the moon on July 21, 1969. (Buzz Aldrin/NASA via AP) 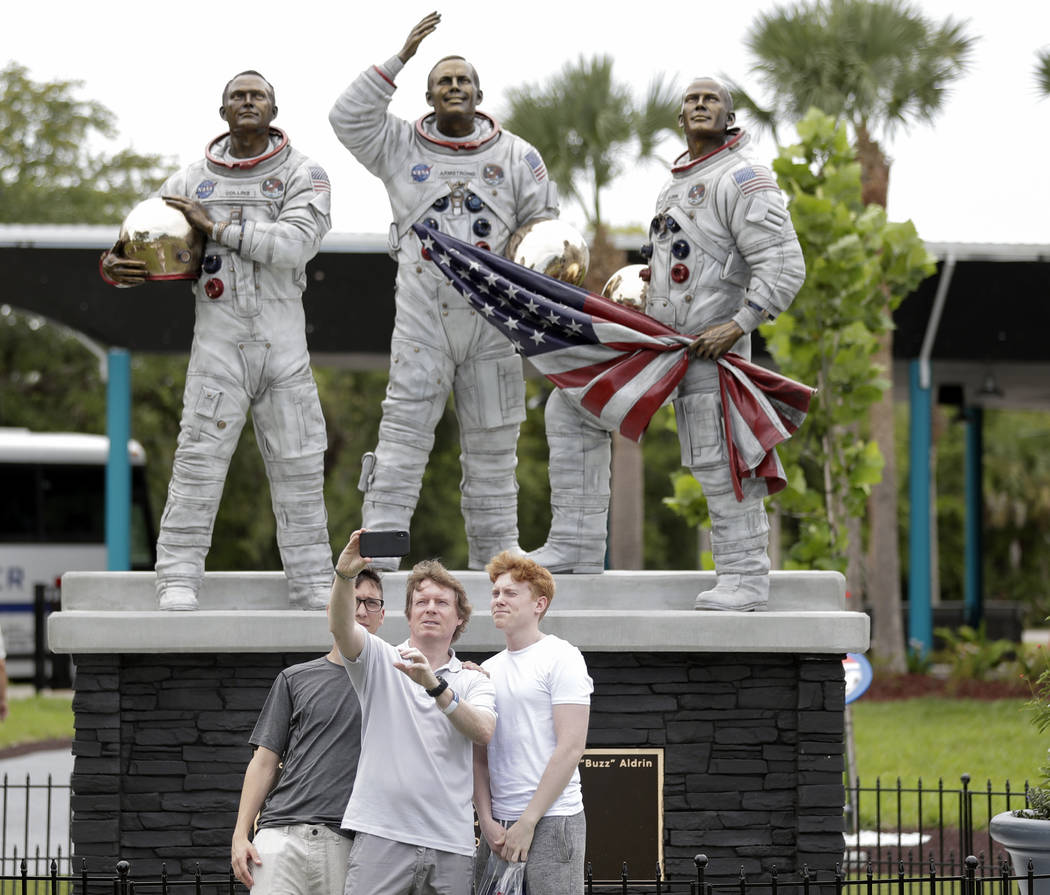 Guests take a selfie photo in front of a new statue of the the Apollo 11 astronauts, from left, Michael Collins, Neil Armstrong and Buzz Aldrin at the Kennedy Space Center Visitor Complex Thursday, July 18, 2019, in Cape Canaveral, Fla., during celebrations for the 50th anniversary of the Apollo 11 moon landing. (AP Photo/John Raoux) 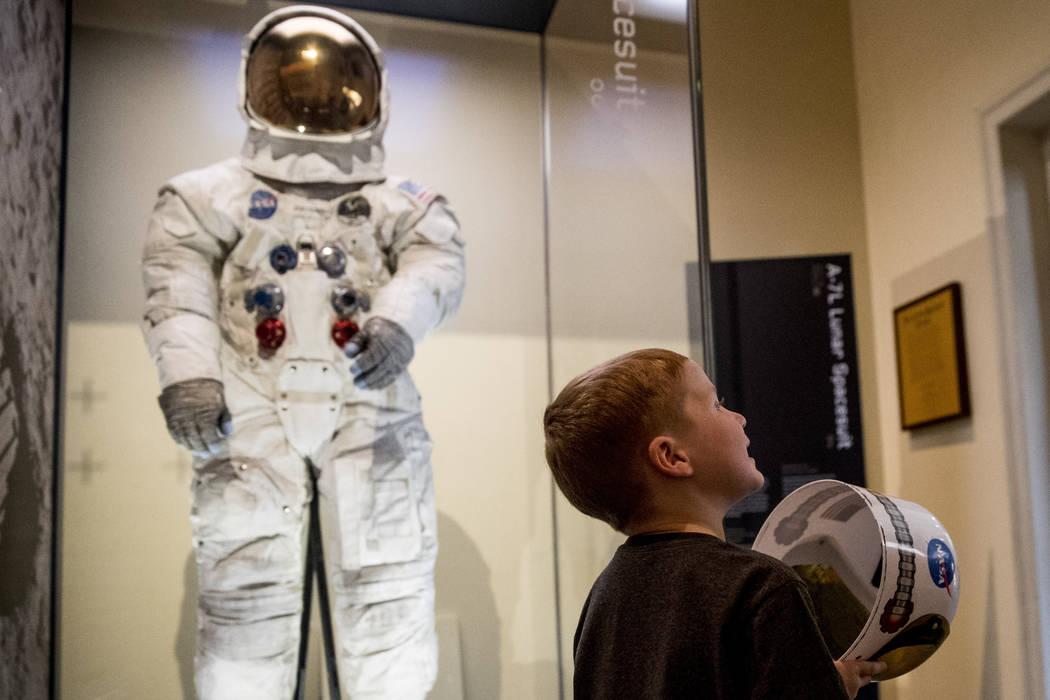 Jack Heely, 5, of Alexandria, Va., plays with a toy space helmet as he arrives as one of the first visitors to view Neil Armstrong's Apollo 11 spacesuit after it is unveiled at the Smithsonian's National Air and Space Museum on the National Mall in Washington, Tuesday, July 16, 2019. (AP Photo/Andrew Harnik) 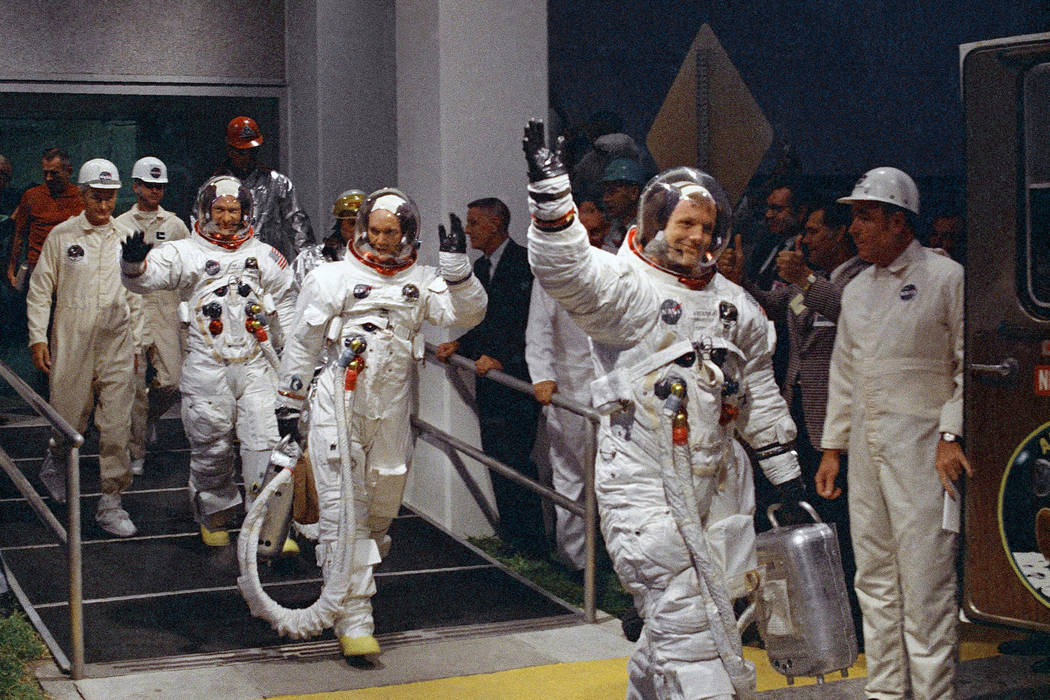 Neil Armstrong, Michael Collins and Buzz Aldrin walk to the van that will take the crew to the launchpad at Kennedy Space Center on Merritt Island, Florida on July 16, 1969. (AP Photo/File) 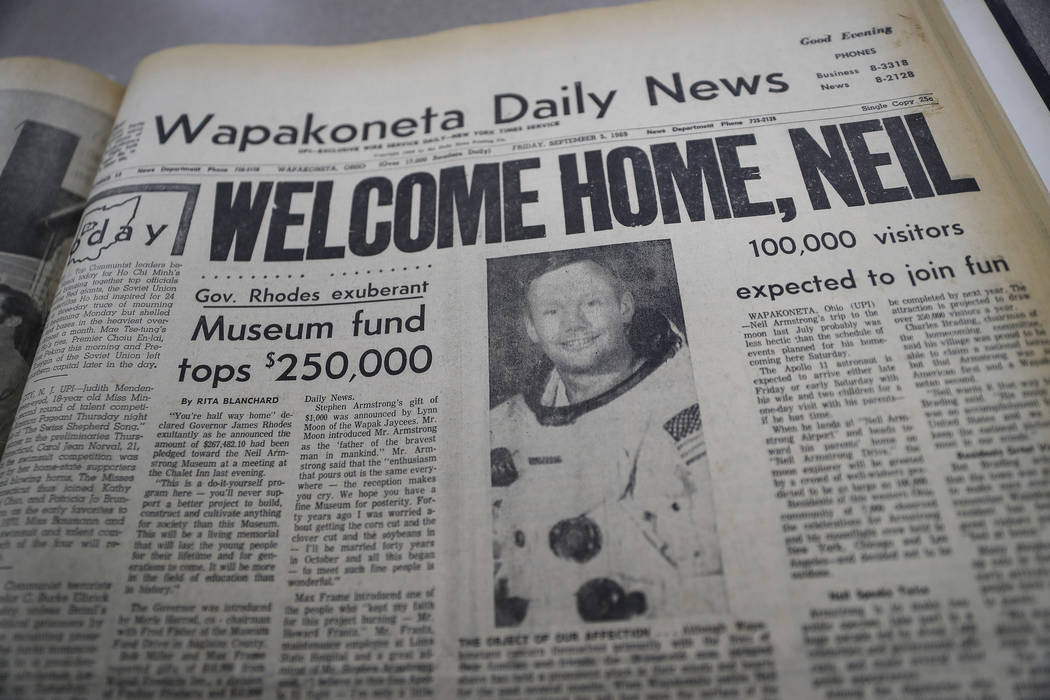 The front page of the Wapakoneta Daily News, dated Sept. 6, 1969, is photographed at the Auglaize County Public Library archives, Wednesday, June 26, 2019, in Wapakoneta, Ohio. Very down to earth about most things, folks in this small western Ohio city are over the moon as they get ready to celebrate the 50th anniversary of the day they watched their hometown hero along with the world. Neil Armstrong put Wapakoneta on the map in July 1969 when he became the first human to walk on the moon. (AP Photo/John Minchillo) 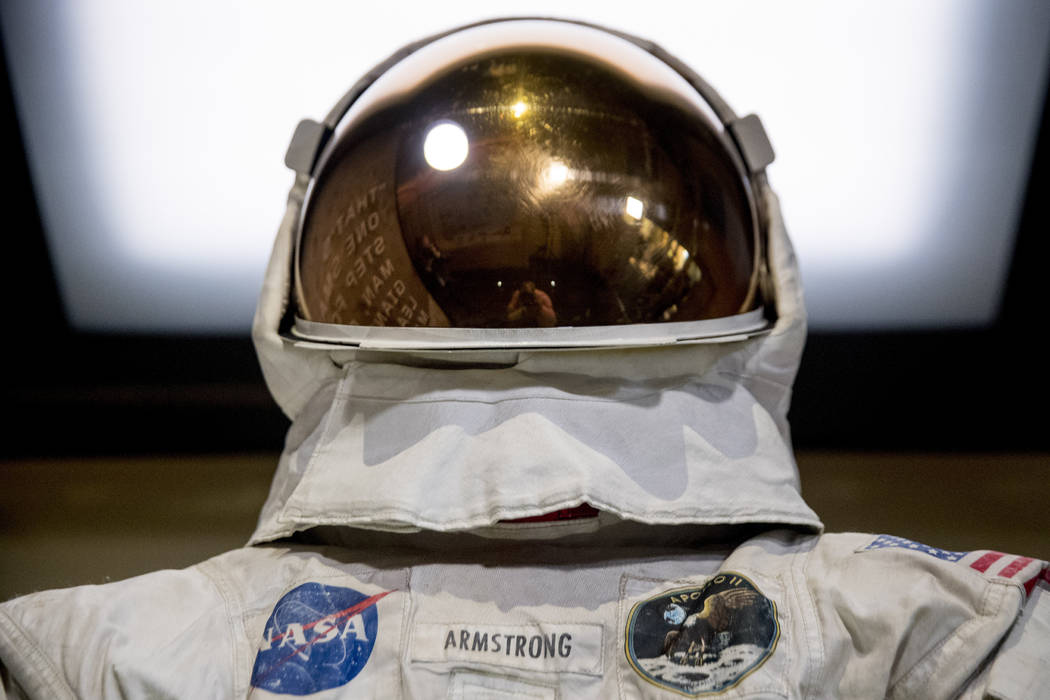 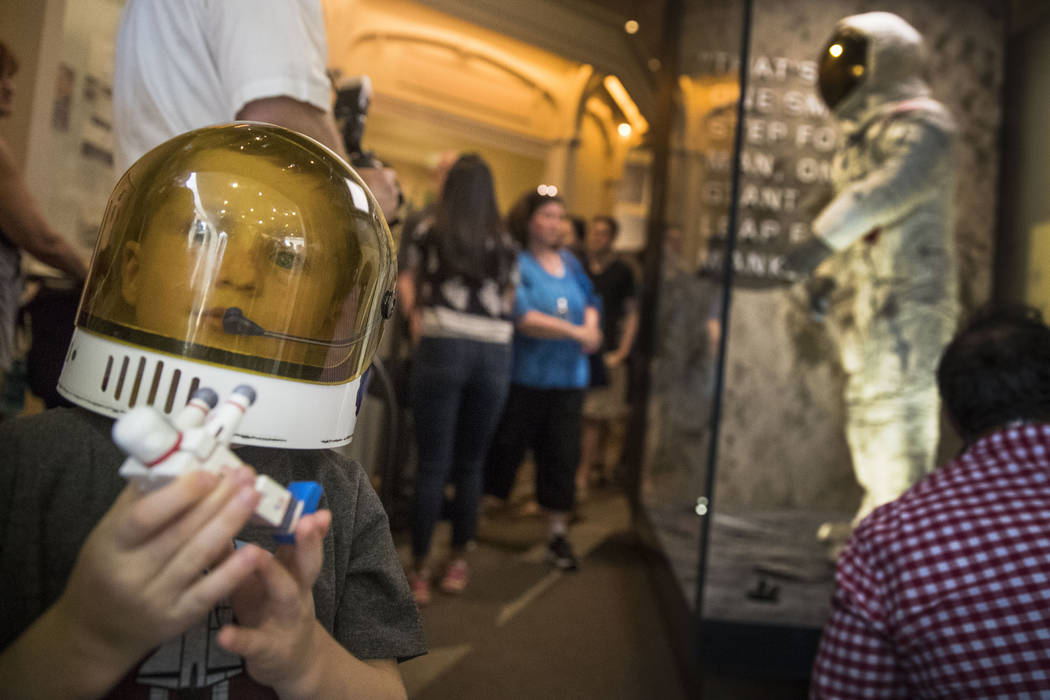 Jack Heely, 5, of Alexandria, Va., wears a toy space helmet as he arrives as one of the first visitors to view Neil Armstrong's Apollo 11 spacesuit, background, after it is unveiled at the Smithsonian's National Air and Space Museum on the National Mall in Washington, Tuesday, July 16, 2019. (AP Photo/Andrew Harnik) 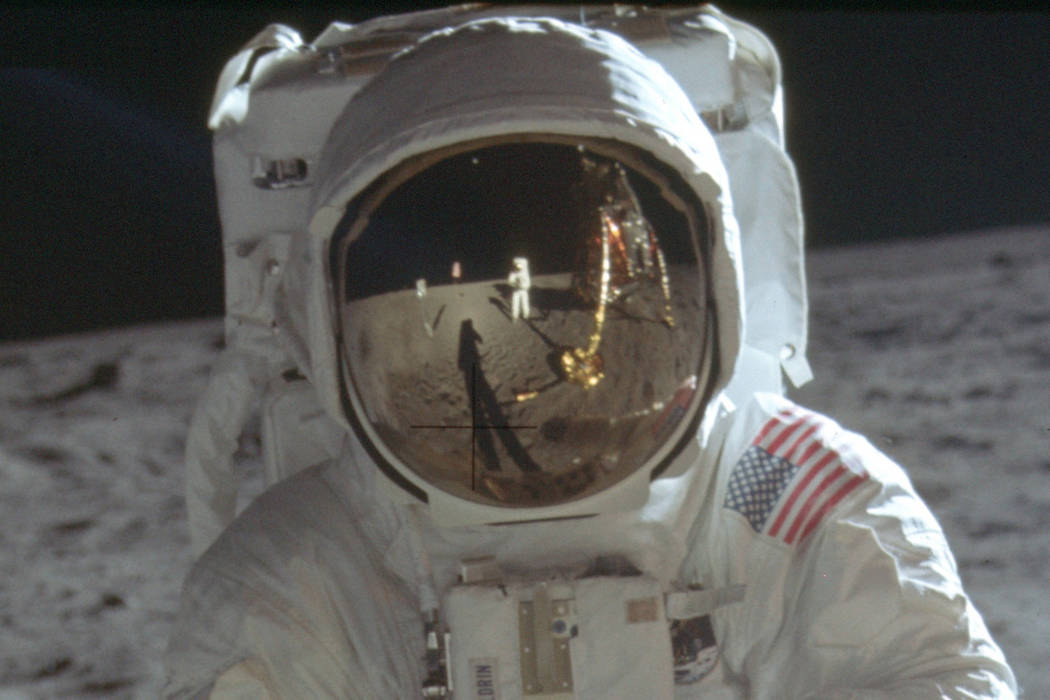 This detail of a July 20, 1969 photo made available by NASA shows astronaut Neil Armstrong reflected in the helmet visor of Buzz Aldrin on the surface of the moon. The astronauts had a camera mounted to the front of their suits, according to the Universities Space Research Association. So rather than holding the camera up to his eye, as we’re accustomed to, Armstrong would have taken the photos from near his chest, which is where Armstrong’s hands appear to be in his reflection. (Neil Armstrong/NASA via AP)

When Neil Armstrong set foot on the moon 50 years ago, the historic achievement won one small bet for a man from England and was one giant loss for British bookmaker William Hill.

Inspired by President John F. Kennedy’s 1962 “We choose to go to the moon” speech, David Threlfall of Lancashire, England, asked William Hill in 1964 for odds on a man landing on the moon by the end of the decade.

“I thought if a bookmaker was prepared to offer reasonable odds, it would be a common sense bet,” Threlfall said July 20, 1969, during a live broadcast of the moon landing at the ITV studio in London.

Offered 1,000-1 odds, Threlfall, who was 20 at the time, wagered 10 pounds (the equivalent of $170 in today’s money) “for any man, woman or child, from any nation on Earth, being on the moon, or any other planet, star or heavenly body of comparable distance from Earth, before January 1971.”

When news of Threlfall’s wager spread, countless bettors — or punters, as they’re known in the United Kingdom — raced to William Hill to plunk down their money on the space race.

By the end of 1964, the odds had dropped to 100-1 on the Soviet Union becoming the first country to land a man on the moon and to 150-1 on the U.S. doing so. By 1966, as more space missions succeeded, odds on reaching the moon dipped to single digits.

After Apollo 11 landed on the moon and Armstrong uttered the famous phrase “The Eagle has landed,” a William Hill representative handed Threlfall a check on live TV for 10,010 pounds — debunking conspiracy theories that the moon landing didn’t happen.

Threlfall won the equivalent of $175,000 in today’s money. “It ended up costing the company about 50,000 (pounds) as people backed it throughout the 60s,” William Hill UK spokesman Joe Crilly told the Las Vegas Review-Journal this week.

“We paid out over (50,000 pounds),” another William Hill spokesman said previously, “and were perhaps the only people not entirely delighted to see that particular feat of human exploration and ingenuity achieved.”

Threlfall, a personnel officer in Lancashire when he collected his winnings, was actually more of a science-fiction fan than a gambler. The moon bet was reportedly the first wager of his life.

He celebrated his win with a trip to the Bahamas and bought a Jaguar sports car with his winnings. But Threlfall didn’t get to enjoy his windfall for long. He was killed in a car accident in November 1970.

William Hill gave Threlfall generous odds. Only months before his bet, a NASA-commissioned risk assessment had forecast the chance of a moon landing by 1970 at 1 in 20.

The odds were in Apollo 11’s favor the day of the launch, but the crew still had its doubts.

“I thought we had a 90 percent chance of getting back safely to Earth,” Armstrong told reporters on the 30th anniversary of the flight. “But only a 50-50 chance of making a landing on that first attempt.”

“I think we will escape with our skins, or at least I will escape with mine, but I wouldn’t give better than even odds on a successful landing and return,” he wrote in a NASA history. “There are just too many things that can go wrong.”

After William Hill gave Threlfall his check, it offered 100-1 odds on man reaching Mars before July 1976.