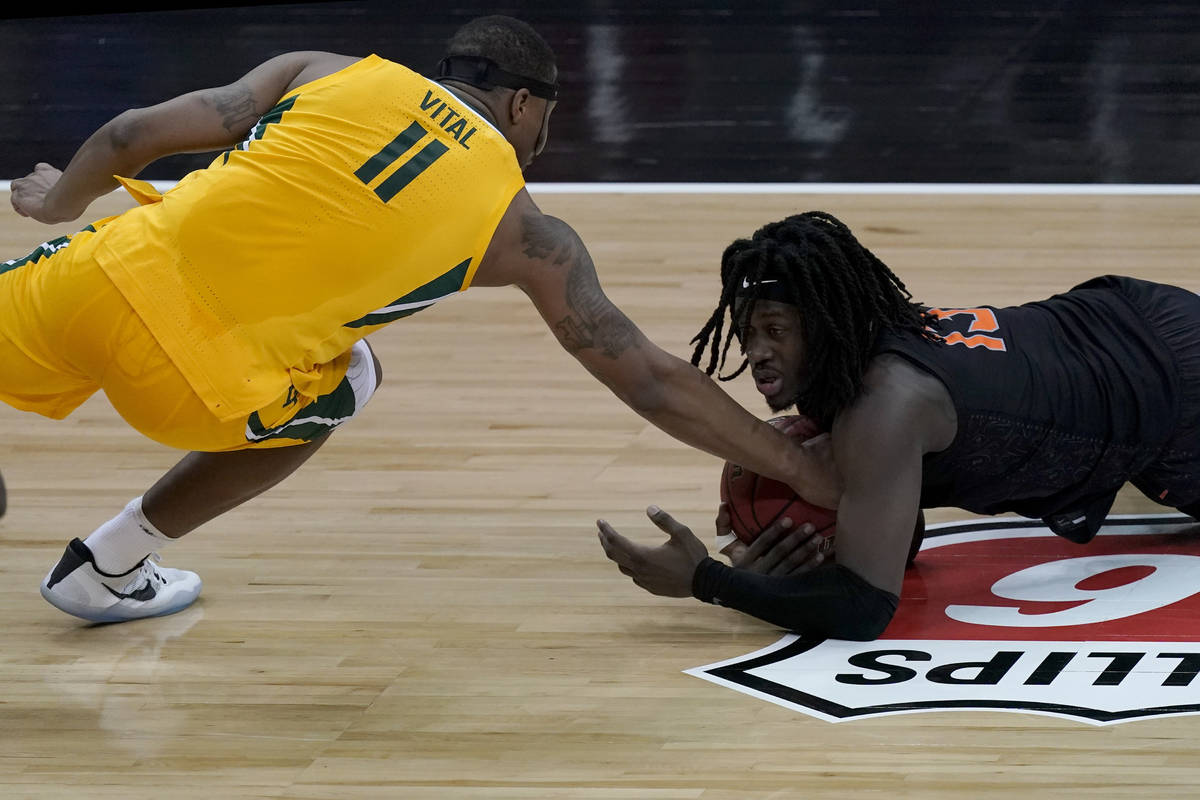 Baylor's Mark Vital (11) tries to steal the ball from Oklahoma State's Isaac Likekele during the second half of an NCAA college basketball game in the semifinals of the Big 12 tournament in Kansas City, Mo., Friday, March 12, 2021. (AP Photo/Charlie Riedel) 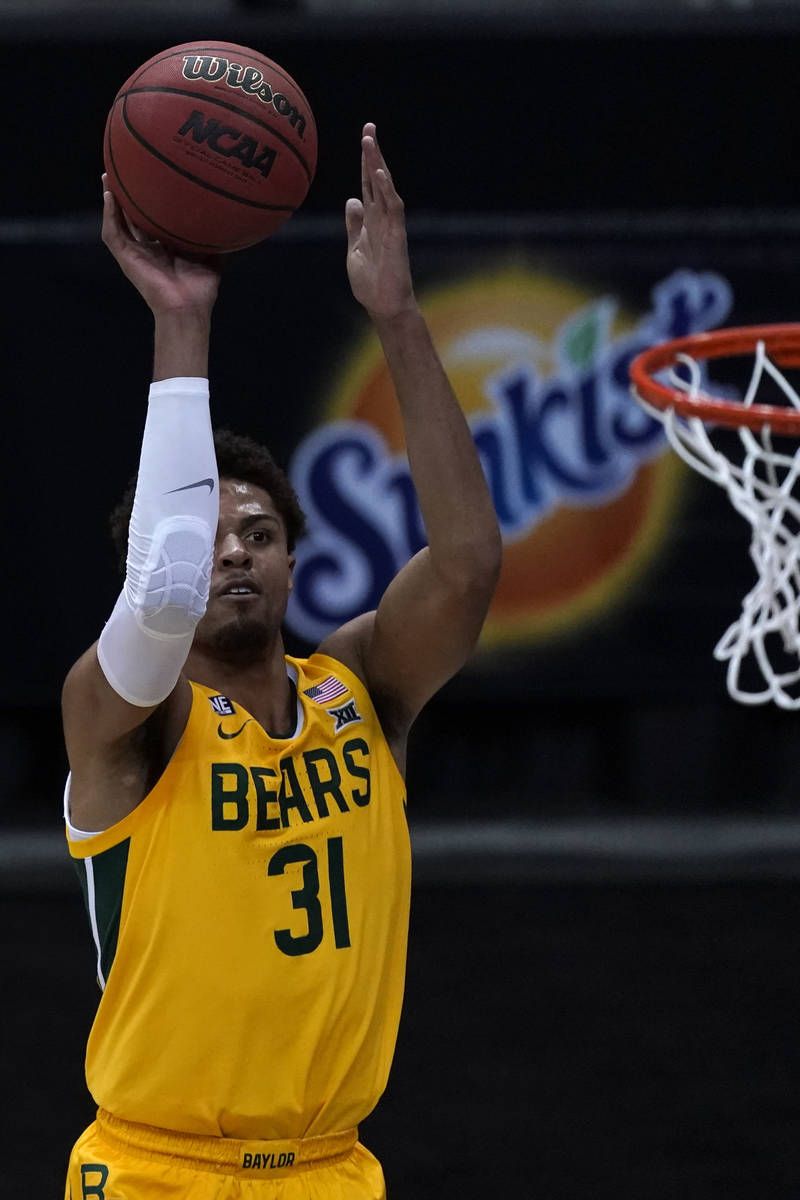 Baylor's MaCio Teague shots during the second half of an NCAA college basketball game against Oklahoma State in the semifinals of the Big 12 tournament in Kansas City, Mo., Friday, March 12, 2021. (AP Photo/Charlie Riedel) 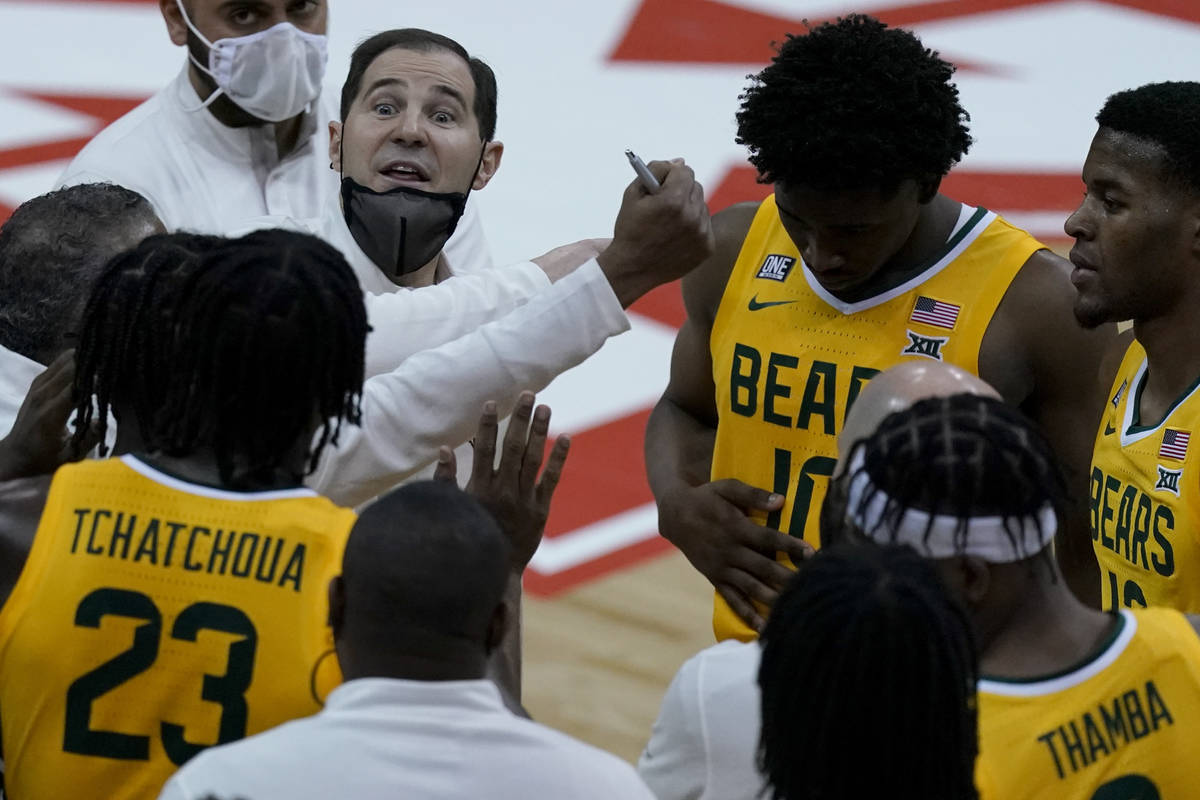 Baylor head coach Scott Drew talks to his team during the second half of an NCAA college basketball game against Oklahoma State in the semifinals of the Big 12 tournament in Kansas City, Mo., Friday, March 12, 2021. (AP Photo/Charlie Riedel) 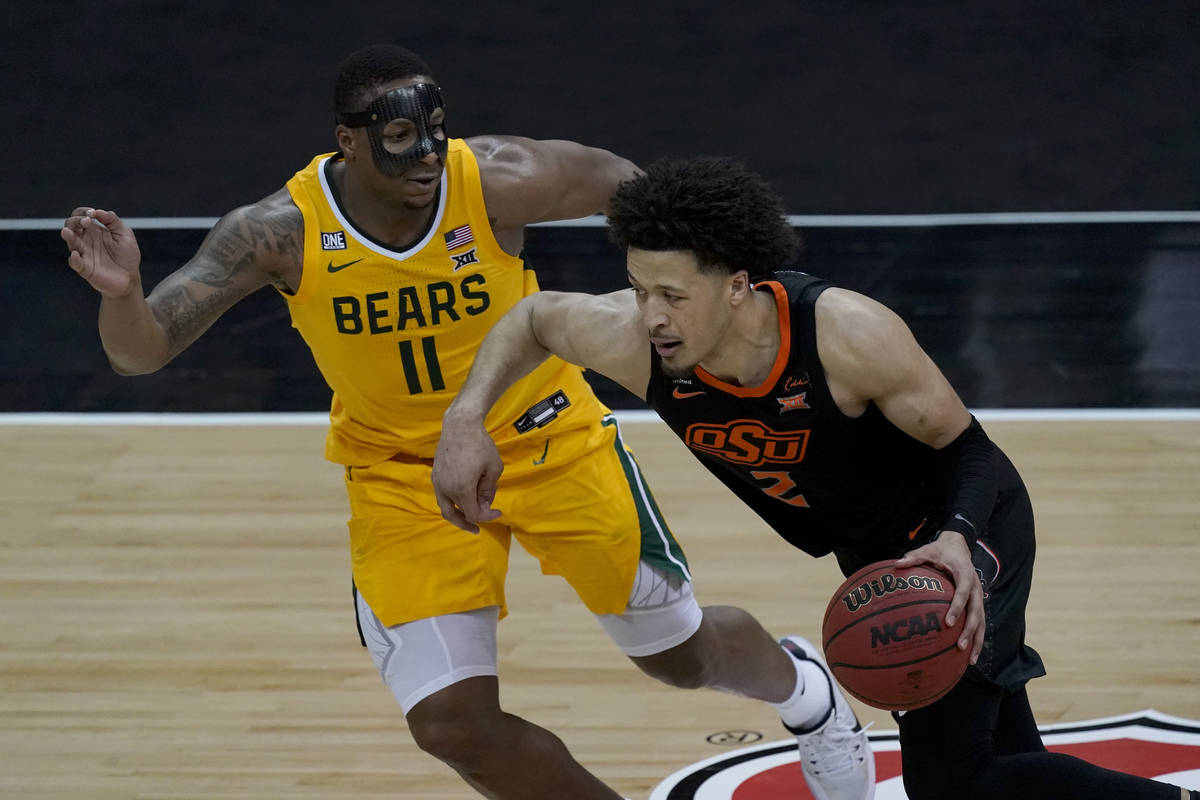 Oklahoma State's Cade Cunningham (2) drives under pressure from Baylor's Mark Vital (11) during the second half of an NCAA college basketball game in the semifinals of the Big 12 tournament in Kansas City, Mo., Friday, March 12, 2021. (AP Photo/Charlie Riedel)

Before Derek Stevens opened Circa, the Las Vegas casino owner went on NCAA Tournament betting binges in which he would wager $11,000 to win $10,000 on each of the first 32 lines posted on Selection Sunday.

To commemorate Stevens’ tradition, Circa sportsbook took $10,000 limit bets on its mobile app Sunday on the opening lines of the NCAA Tournament.

“We’re just trying to let people know that this is the place to come if you want to bet large amounts on the app and not have to plead your case for larger limits,” Circa sportsbook director Matthew Metcalf said. “It went really well. We took a lot of action on the mobile app. We probably took about 50 $10,000 limit bets in the first hour.”

Six limit bets were placed on the Baylor-Hartford game alone. The No. 1 Bears opened as the largest favorites on the board, at -25 over the No. 16 Hawks, and the game was bet up to 27 before dipping back to 26.

“There’s been awesome two-way action between 26 and 27,” Metcalf said. “The sharps are battling it out on that one.”

Metcalf said he would classify pretty much all of the bets Circa has taken so far as sharp plays. Wiseguys have been all over UC Santa Barbara, which was a 10-point underdog to Creighton before the number was bet to 6½.

Creighton is coming off a stunning 73-48 loss to Georgetown in the Big East tournament title game.

“That’s probably got a lot to do with that,” Metcalf said. “We opened it 10 and took a bet right away and went down to 9. That didn’t surprise me, but what has surprised me is that it’s moved all the way down to 6½. I would think 6½ is too low.”

Defending national champion Virginia opened as a 10½-point favorite over Ohio, but sharp action on the underdog has caused the line to drop to 7½ at William Hill. Part of the move is because the majority of the Cavaliers’ team is in COVID-19 quarantine and part of it is because of defensive-minded Virginia’s slow-paced style of play.

“Ohio finished the season strong, and Virginia’s not one of those teams that has the firepower to always pull away,” William Hill sportsbook director Nick Bogdanovich said. “But I still think we’re going to need Ohio in this one. The masses will be on Virginia, especially with them now getting a better number.”

The Oklahoma State-Liberty total has dropped from 147 to 142 at William Hill.

Las Vegas sportsbooks posted NCAA Tournament regional odds Monday. No. 1 overall seed Gonzaga is the -250 favorite at the Westgate to win the West Regional. Iowa is the 5-1 second choice.