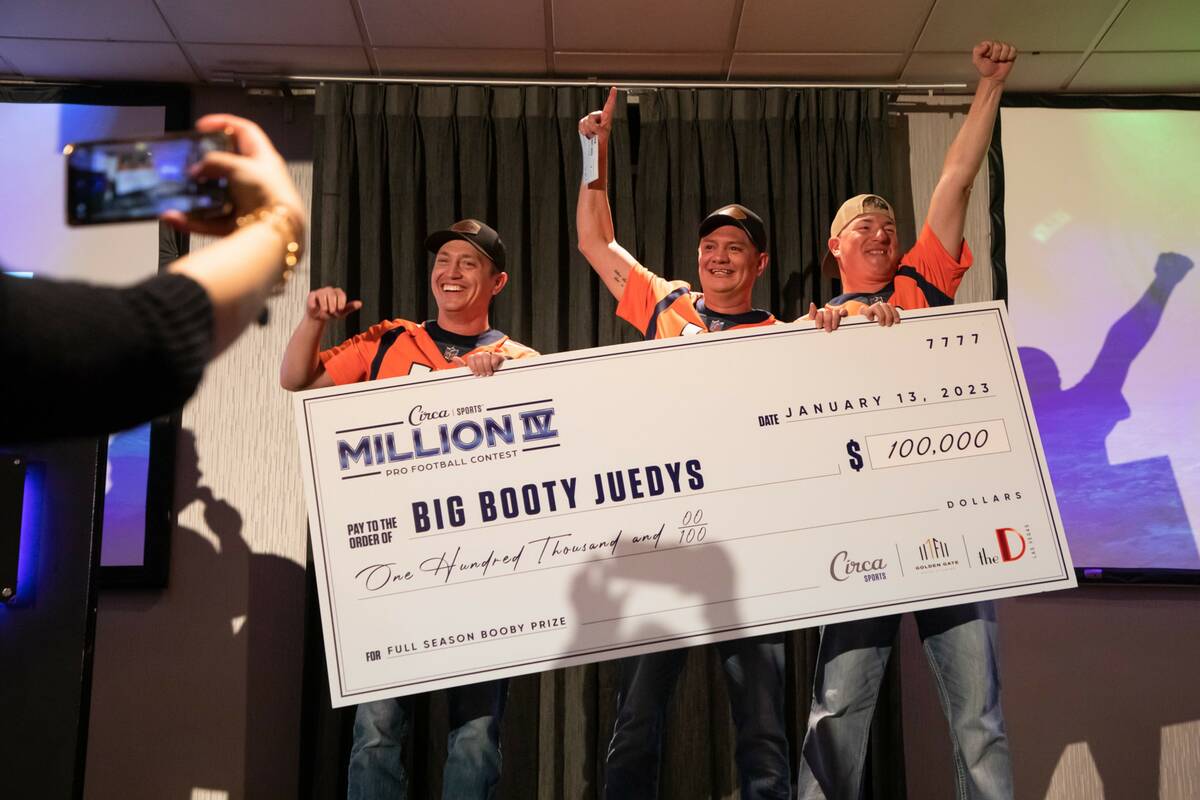 With five weeks left in the NFL season, the Circa Sports Million contest entry named Big Booty Juedys stopped checking the standings because they were so far out of the money.

But Colorado residents and Denver Broncos fans Preston Hollis, Taylor Preisser and Dan Stone, who comprised the $1,000 entry, kept submitting their five weekly picks against the spread to finish what they started.

The three friends had already planned a trip to Las Vegas to celebrate Hollis’ 42nd birthday Saturday when they learned they had another reason to party.

In a victory celebration at the D Las Vegas on Friday, Circa vice president of operations Mike Palm jokingly handed them a standard size check before presenting them with an oversized check for $112,500.

“We had no idea (we’d won) until Monday afternoon, after the contest was done,” said Preisser, 36. “I’m dead serious. In the group chat, we thought, ‘Where did we end up in this?’ And we were like, ‘Oh, man, we’re at the bottom. We’re really bad at this.’”

The fun-loving friends, wearing Broncos jerseys, said they tried to pick winners until the end in their first football handicapping contest.

Instead, they went 0-4-1 to win the booby prize by a half point. The push was on the Chargers +3, as they faded their beloved Broncos in Denver’s 31-28 comeback win.

“If the Broncos win by four, we win the ($25,000 quarterly prize outright) because we were on the Chargers,” Preisser said. “We’re Broncos fans, but we thought there’s no way the Broncos beat the Chargers.”

Unaware they needed Detroit to cover against Green Bay in the season finale to clinch the booby prize, they were actually cheering for the Packers.

“We were watching and sweating the Packers-Lions game for the bets we made,” Hollis said. “We picked the Packers. Because we’re idiots.”

Ironically, the Circa Million winners, four friends from Detroit with the entry named Chief, clinched their $1 million win when their hometown Lions covered to finish 59-26-5 (69.4 percent).

“We’re going to enter two teams next year and fade ourselves,” Hollis said.

They came up with their picks via consensus.

Asked for their secret to “success,” Preisser said, laughing, “Find two degenerate friends that are like, ‘Yeah, we’ve got locks this week.’

“And don’t listen to anyone outside of the group. Have tunnel vision. We have terrible ideas.”