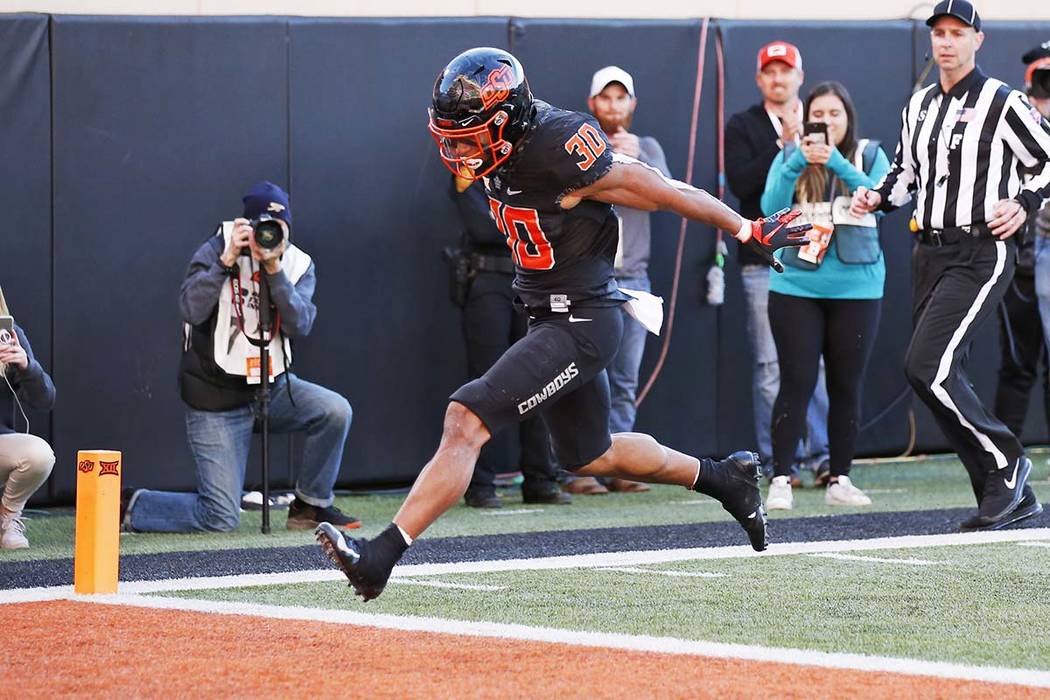 Oklahoma State running back Chuba Hubbard (30) leaps into the end zone with a touchdown in the second half of an NCAA college football game against TCU in Stillwater, Okla., Saturday, Nov. 2, 2019. (AP Photo/Sue Ogrocki)

Saturday’s Oklahoma State-Kansas game has the makings of complacent versus hungry.

Oklahoma State played 12 games as a favorite of 5½ to 19½ points in the last two years. The Cowboys lost eight of those games outright.

After getting bowl eligible, Oklahoma State had a bye week and faces two games as heavy favorites before hosting Oklahoma.

Running back Chuba Hubbard has been a spread-saving savior, and he should get as many yards as he wants against Kansas. But I question the focus and motivation of the rest of the team.

The Jayhawks finally hit a wall against Kansas State after a brutal stretch of games, but covered three consecutive times before then and is off a bye. This is Kansas’ best chance at one more upset, and I expect the Jayhawks to be much more excited at kickoff.

■ Southern California (-4½) over CALIFORNIA: The Bears’ defense ranks 33rd in SP+. The Trojans have played five top-40 defenses and averaged 25.2 points in those games. But four of those five teams also featured top 35 offenses, and the Cal offense ranks 107th. The Bears have a good secondary, but the Trojans have athletic wide receivers who can make plays in space. I don’t think Cal can play good enough complementary football to keep this within one touchdown.

■ Cincinnati (-14) over SOUTH FLORIDA: Fading the Bulls made bettors plenty of money late last season after one of the most fraudulent 7-0 starts in years. South Florida managed seven points and 3.8 yards per play against Temple last week. Cincinnati’s defense is a mirror equivalent, but the Bearcats have a much better offense. Charlie Strong is not the answer at South Florida, and the Bulls (4-5) face a closing stretch of Cincinnati, Memphis and Central Florida. His team could get run off the field Saturday.

■ WASHINGTON STATE (-10) over Stanford: The Cougars have regressed. Washington State struggles against Pac-12 teams with good defenses, such as Utah (38-13) and Cal (33-20), and explosive offenses, such as UCLA (67-63), all losses. Stanford offers neither of those. QB K.J. Costello probably isn’t playing, and the Cardinal offensive line and play-calling haven’t been good. Stanford has scored 16 and 13 points against UCLA and Colorado, teams that lack good defenses, in two of its last three games. Outside of games against the Utes and Bears, Washington State has scored 45.9 points per game.

■ Memphis (-10½) over HOUSTON: I liked Memphis more at a single-digit number, but I still think it’s mispriced. Mike Norvell is 3-0 straight up and ATS against Houston, and this probably is the worst Houston team he’s faced. The Cougars (3-6) have wins over Prairie View A&M, North Texas and Connecticut. Houston’s defense has faced six SP+ top 50 offenses and allowed an average of 39 points. Memphis’ offense ranks No. 9. The Tigers thrive on explosive plays, ranking fifth in the country with 33 gains of 30 or more yards. The Cougars’ defense ranks 127th in that same category, allowing 34. Memphis also has scored 39 nonoffensive points, or 4.3 per game.