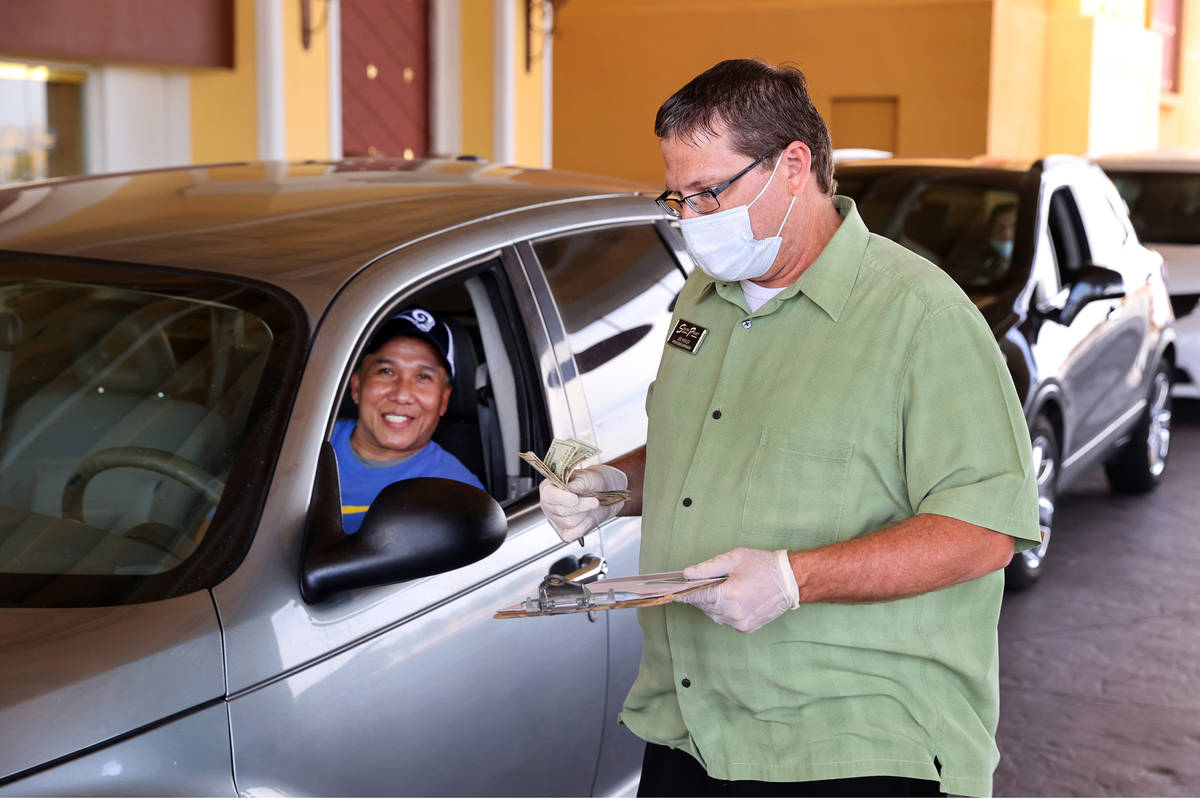 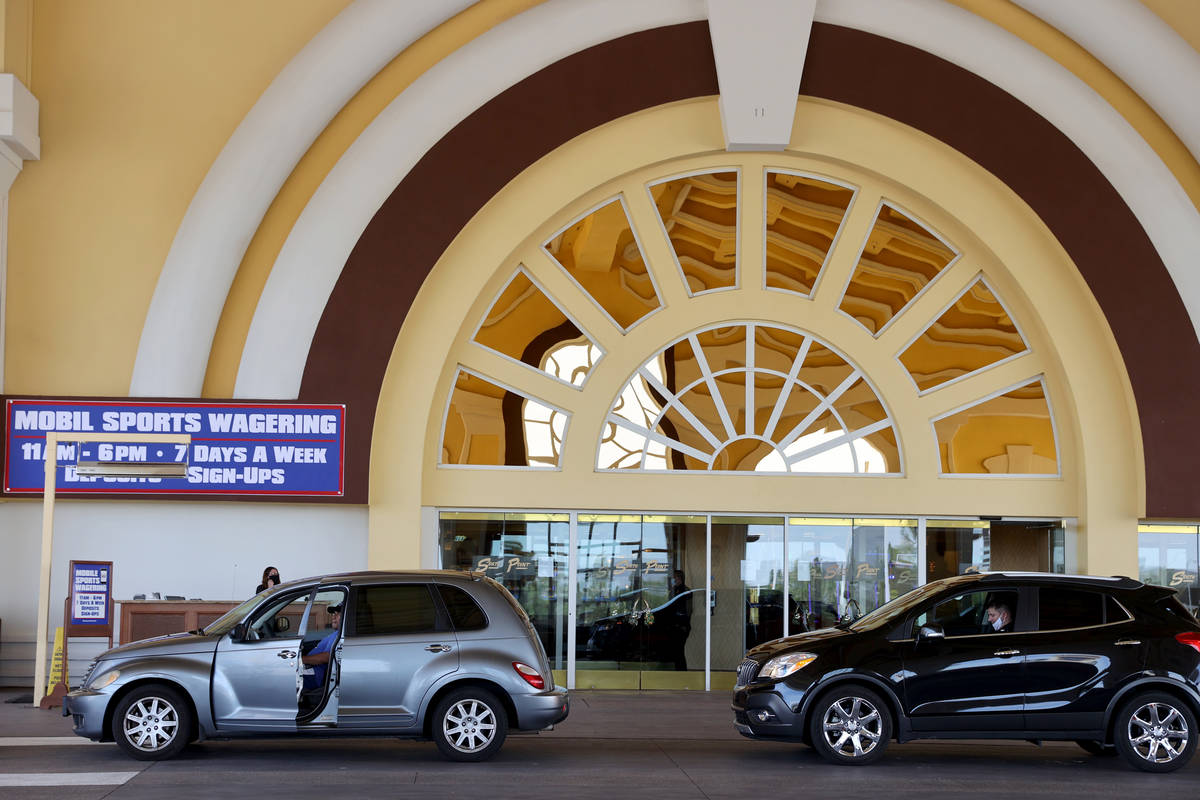 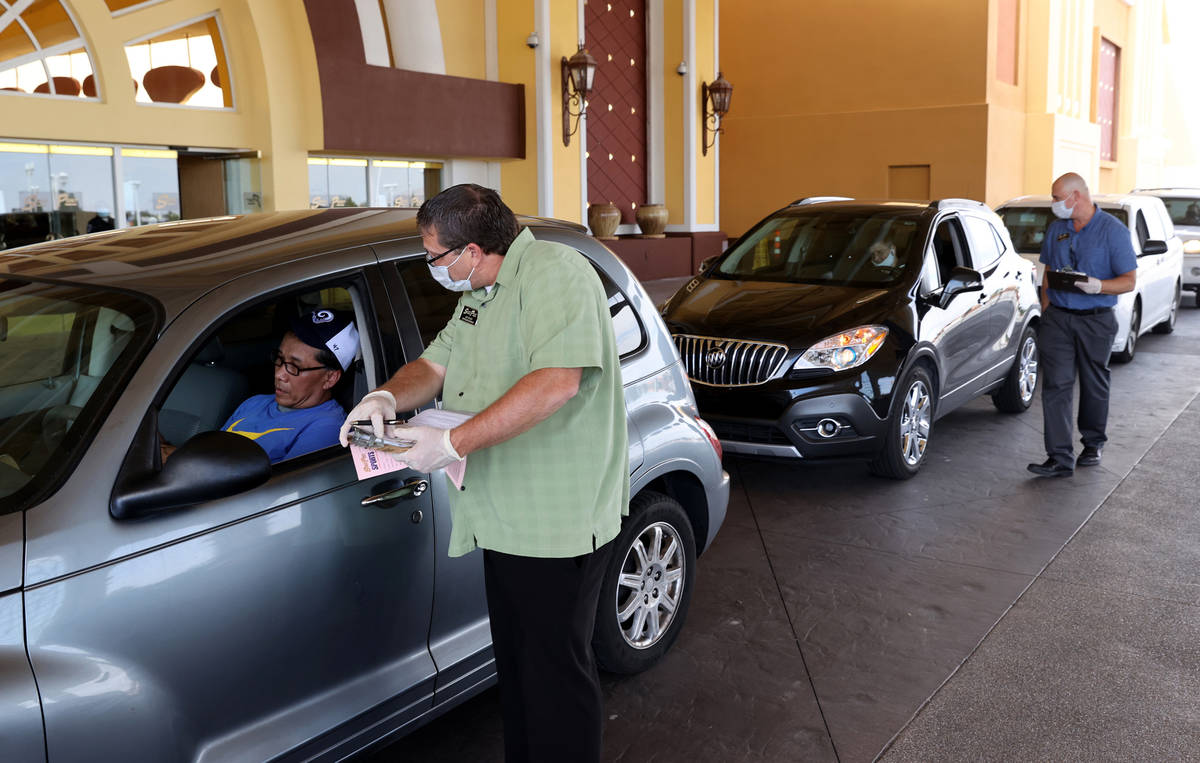 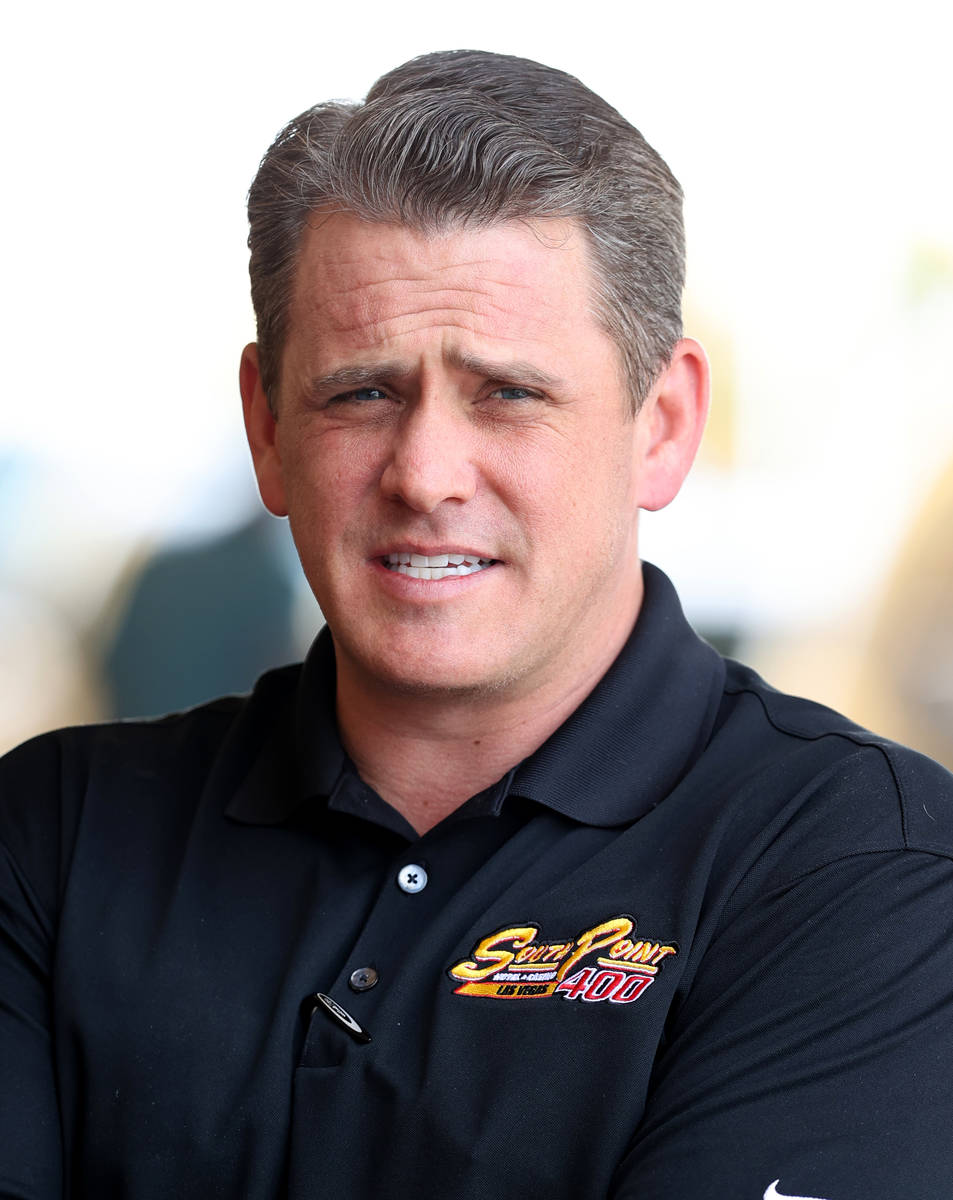 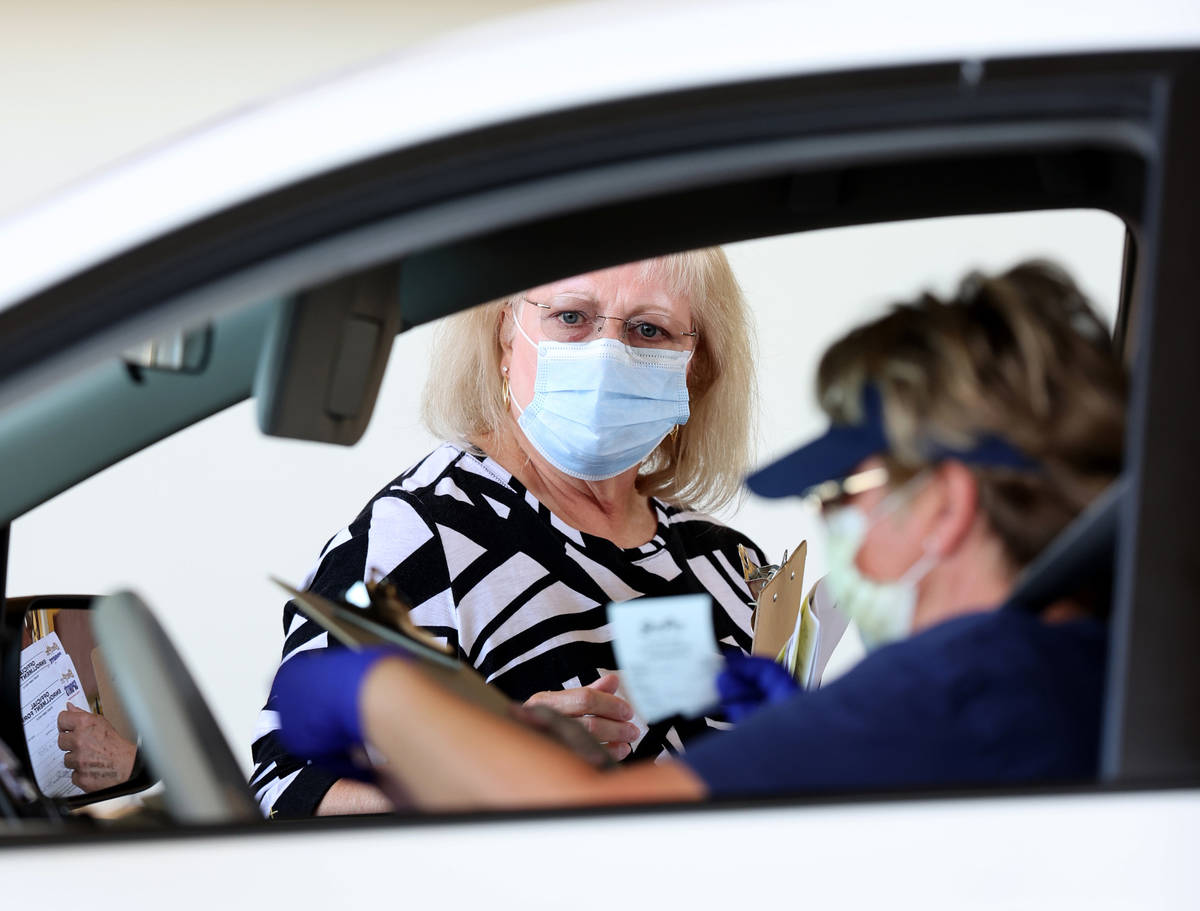 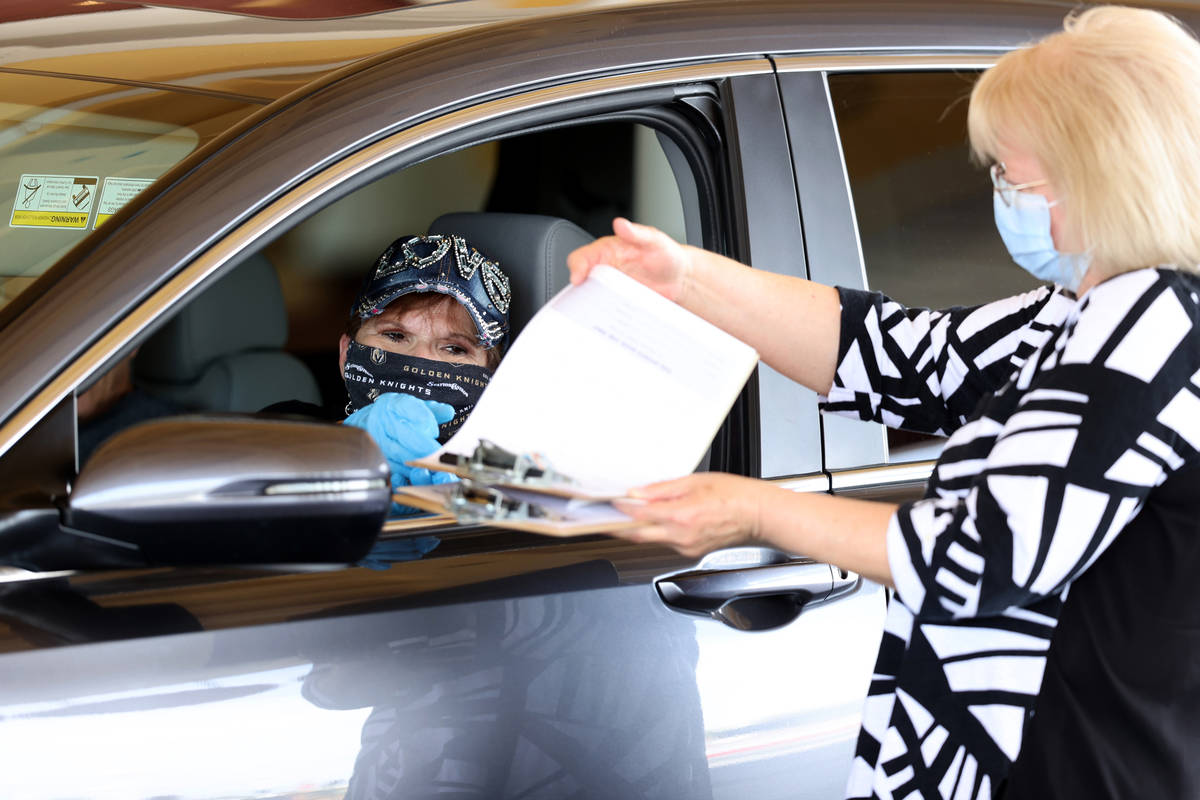 Do you want a parlay with that?

Two Las Vegas sportsbooks are using drive-thru service to let customers open and maintain mobile betting accounts during the coronavirus pandemic. The South Point began servicing customers in its valet parking area Wednesday, and Circa Sports said it plans to do the same in the Golden Gate valet area starting Thursday.

Gaming regulations require that customers sign up for mobile betting accounts in person. That has hamstrung sportsbooks and left bettors without accounts out in the cold during the pandemic, albeit with a limited sports menu available to wager on.

Fiesta Rancho has a drive-thru window for bets, but Station Casinos sportsbooks remain shut down. The South Point and Circa service is for accounts, not individual wagers.

Andrews declined to say how many customers came through. A Review-Journal photographer said he saw at least 50 cars go through the line, and some cars even left because the line was too long.

South Point general manager Ryan Growney said: “I had an over/under on how many cars we’d see. I lost about noon (an hour after opening).”

The curbside service will be open daily from 11 a.m. to 6 p.m. Employees are not allowed to carry cash outside the casino, so account withdrawals can be made through the mail using a form on the app, Andrews said.

Paul Thomas, 50, of Las Vegas, said he signed up for an account so he could bet on Saturday’s UFC 249 card in Jacksonville, Florida.

“I’m going up the wall, man,” he said. “… It’s like everybody else. I think everybody else is just going berserk, going crazy. I need a haircut, too.”

The South Point’s app had been turned off since casinos were shut down in March. Andrews said he was excited to open back up, posting odds on UFC, NASCAR futures and the NFL, including Super Bowl futures and player props.

Andrews said he knew customers were eager to get back in action, even if their financial circumstances had been impacted by the pandemic.

Circa Sports has kept its app open throughout the shutdown but hasn’t been able to accept new sign-ups. That will change with its drive-thru service, which will open from 10 a.m. to 6 p.m. daily starting Thursday.

“We’re just trying to give patrons as many betting options as we can,” Circa sportsbook operations manager Jeffrey Benson said.

Customers can sign up for accounts, fund existing accounts or even enter Circa’s two NFL handicapping contests, the Circa Sports Million II and Circa Survivor, Benson said. Each costs $1,000 to enter.

Circa can accept winning or refunded tickets as well, but money must be placed into a betting account because employees can’t carry cash outside, Benson said. That means all deposits must be made in the exact amount because no change can be given, he said. Deposits and withdrawals for existing accounts can be made through the app, he said.

Benson and Andrews said curbside service has allowed the casinos to bring back a handful of employees who have been furloughed during the shutdown.

Andrews has been a bookmaker for 40 years, but he said he never imagined trying to live and work in the conditions caused by the pandemic.

“The only thing that would have surprised me more than this was getting invaded by aliens,” he said with a laugh.

Also, William Hill announced Wednesday that it would have three drive-up locations in Las Vegas on Friday and Saturday to create and fund mobile sports betting accounts. The sign-up stations will be available in the parking lots of Alamo Casino, Arizona Charlie’s Boulder and Arizona Charlie’s Decatur from 11 a.m. to 5 p.m.