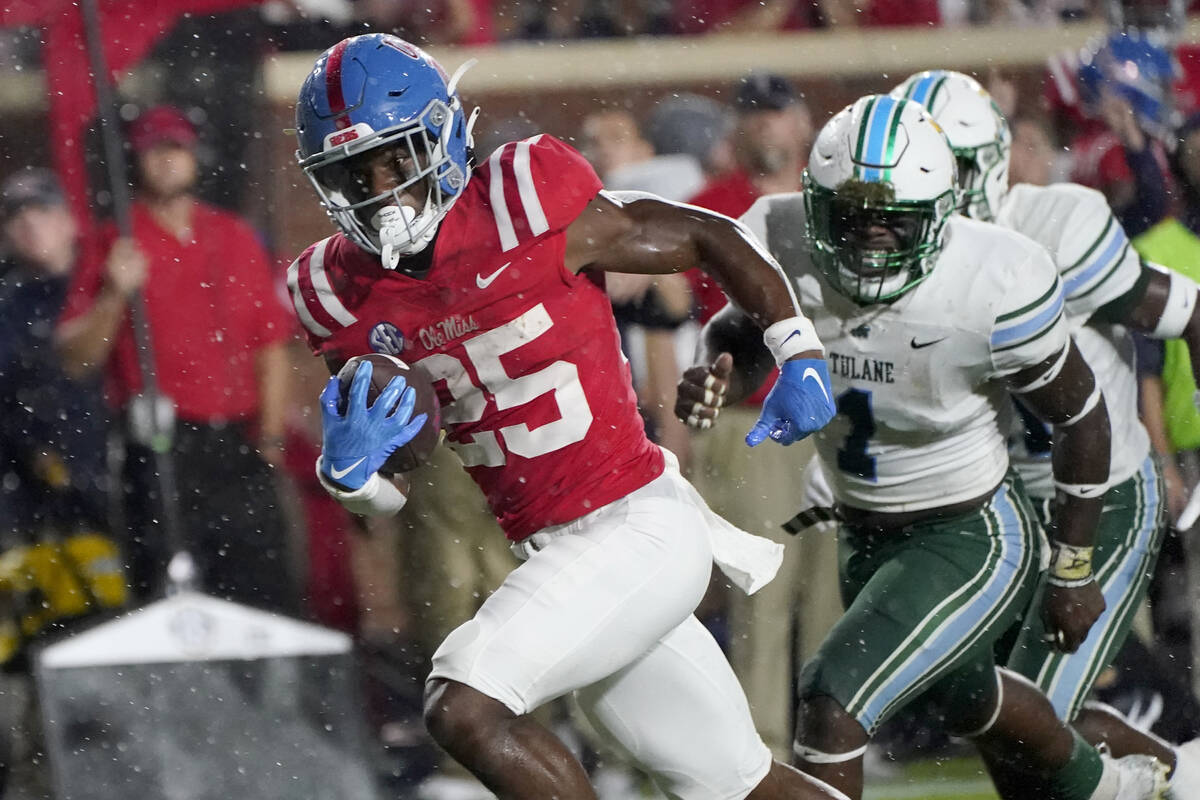 Mississippi running back Henry Parrish Jr. (25) runs past Tulane defenders on his way to a 19-yard touchdown during the first half of an NCAA college football game, Saturday, Sept. 18, 2021, in Oxford, Miss. (AP Photo/Rogelio V. Solis)

If you play word association with Mississippi football, you might blurt out Lane Kiffin or Matt Corral. You probably would picture a downfield pass.

But because of an improved defense, Corral’s ADOT (average depth of target) has shrunk significantly this season. Perhaps more notably, Ole Miss is running the ball well.

Rebels running back Henry Parrish Jr. has played more snaps and rushed for more yards per carry than Jerrion Ealy, who finished eighth in the Southeastern Conference in rushing last season. Heck, former Ole Miss quarterback John Rhys Plumlee led the SEC in rushing two years ago. Even receiver Dontario Drummond has run for a touchdown.

Alabama quarterback Bryce Young ranks 107th in ADOT of the 141 players with 50-plus attempts, according to Pro Football Focus. The Crimson Tide are allowing nearly 10 quarterback pressures per game.

Expect Alabama to utilize more 12 personnel with tight ends Jahleel Billingsley and Cameron Latu and to attempt to play keep-away from the Ole Miss offense. The Rebels are sometimes dropping eight into coverage on defense and playing to prevent the big play.

The Tide struggled to defend the run against Florida, as the Gators applied tempo after multiple Alabama three-and-outs. They need to consistently grind out first downs. They won’t be shocked by the Ole Miss tempo this time.

It all adds up to taking Ole Miss-Alabama under 79½.

Mississippi State-TEXAS A&M U46: Mississippi State’s rush defense is 20th in Expected Points Added per snap. Adjusting for competition, the Bulldogs might be even better. Texas A&M could be getting healthy along the offensive line, but Aggies quarterback Zach Calzada averages 5.6 yards per pass attempt and is completing less than 53 percent of his passes. The Aggies’ pass defense is second in EPA per snap and one of the leaders in preventing big plays. Unders are 4-0 in Texas A&M games, cashing by 15, 33, 16 and 17 points.

Auburn (+3) over LOUISIANA STATE: Auburn is one of the nation’s best at preventing explosive passing plays and leads the country in tackles for loss. Don’t expect LSU to be able to run the ball. And quarterback Max Johnson is below average when he gets pressured, a bad combo against a defense that lives in the backfield.

Florida (-7½) over KENTUCKY: On the surface, the Wildcats feign extra pizzazz with star wide receiver Wan’Dale Robinson and a former Los Angeles Rams assistant coach as offensive coordinator. But this offense still runs to set up the pass. Two weeks ago, Chattanooga won the line of scrimmage against Kentucky, and Florida won the offensive line against Alabama. ESPN’s SP+ ranks Florida’s offense third. Kentucky’s defense has faced Louisiana-Monroe, Chattanooga, South Carolina and Missouri.

Bowling Green (+16½) over KENT STATE: The Falcons are 4-0 ATS, covering the closing number by 17½ points per game. Bowling Green’s pass offense ranks 49th in EPA per snap and 11th in the same stat on defense. Kent State ranks 123rd and 103rd. Kent State runs lightning-fast tempo and has played a brutal nonconference schedule. But this is a lot of points in a Mid-American Conference game in which both defenses could hold a matchup advantage.