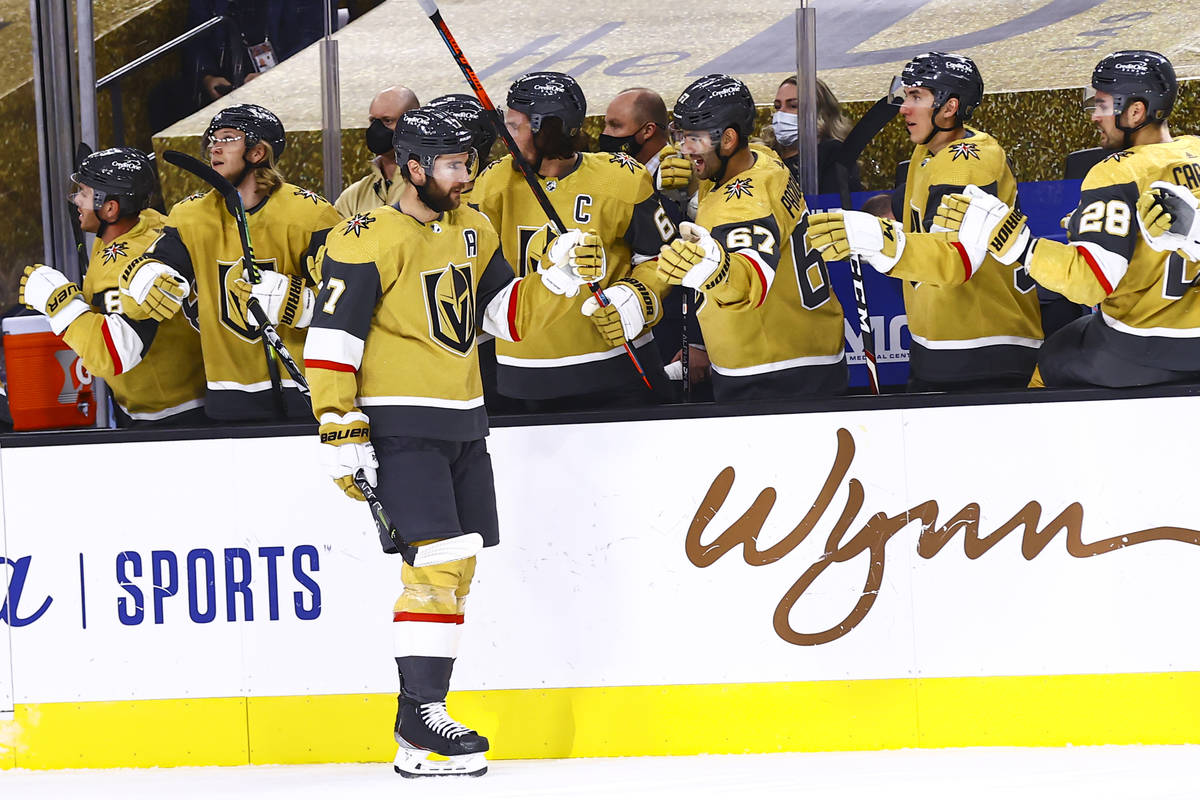 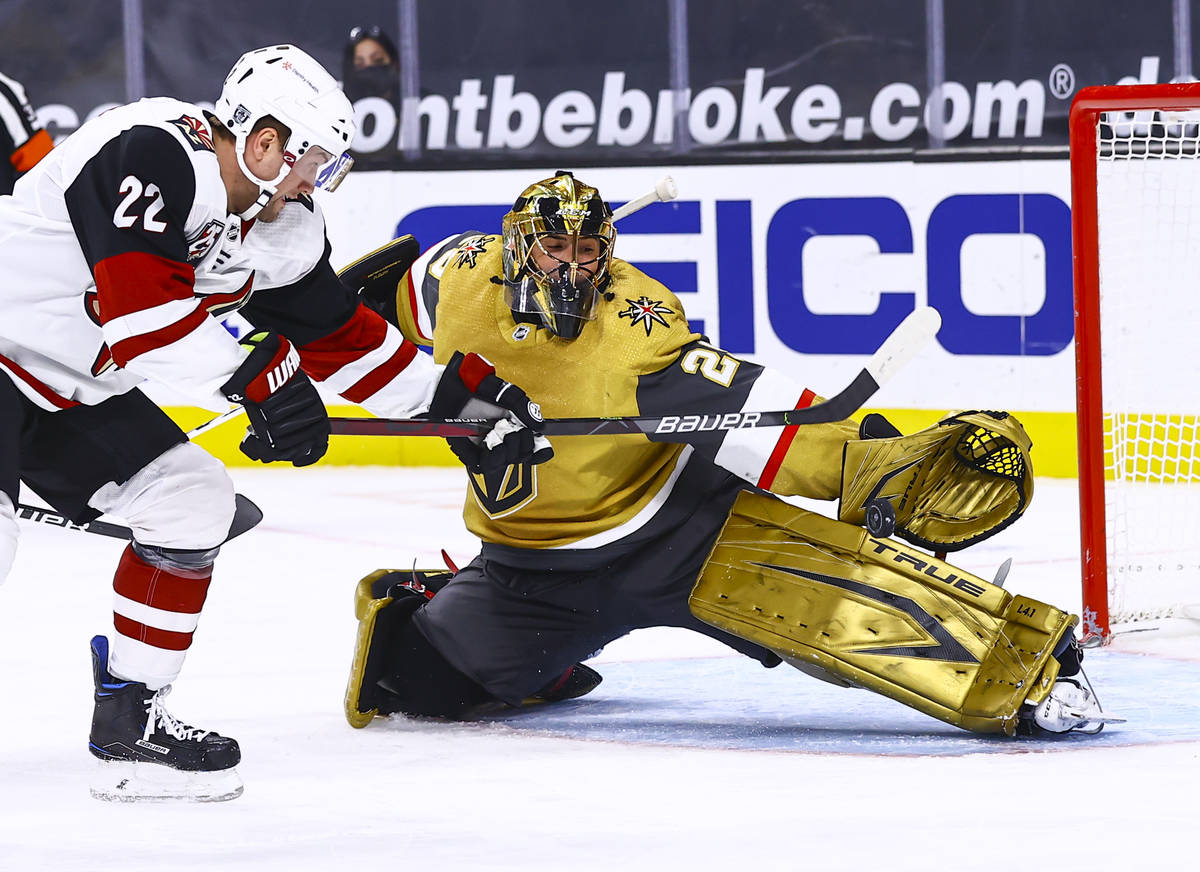 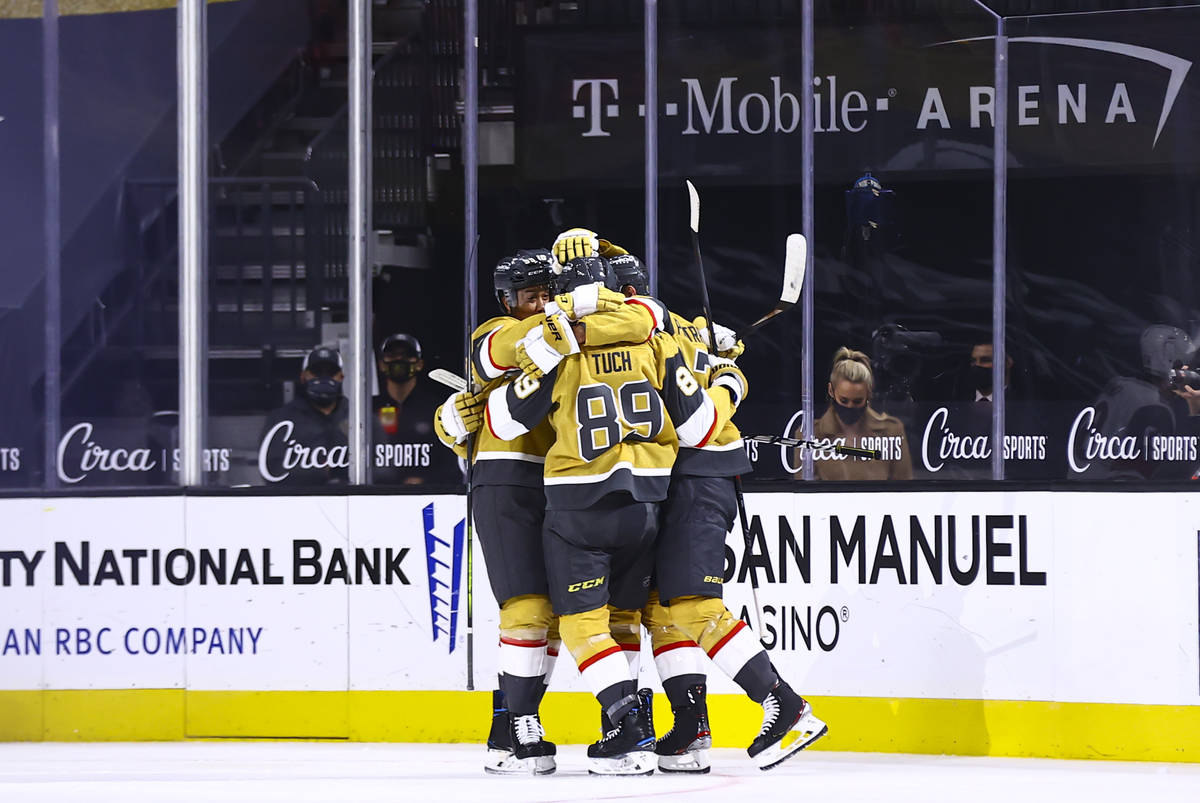 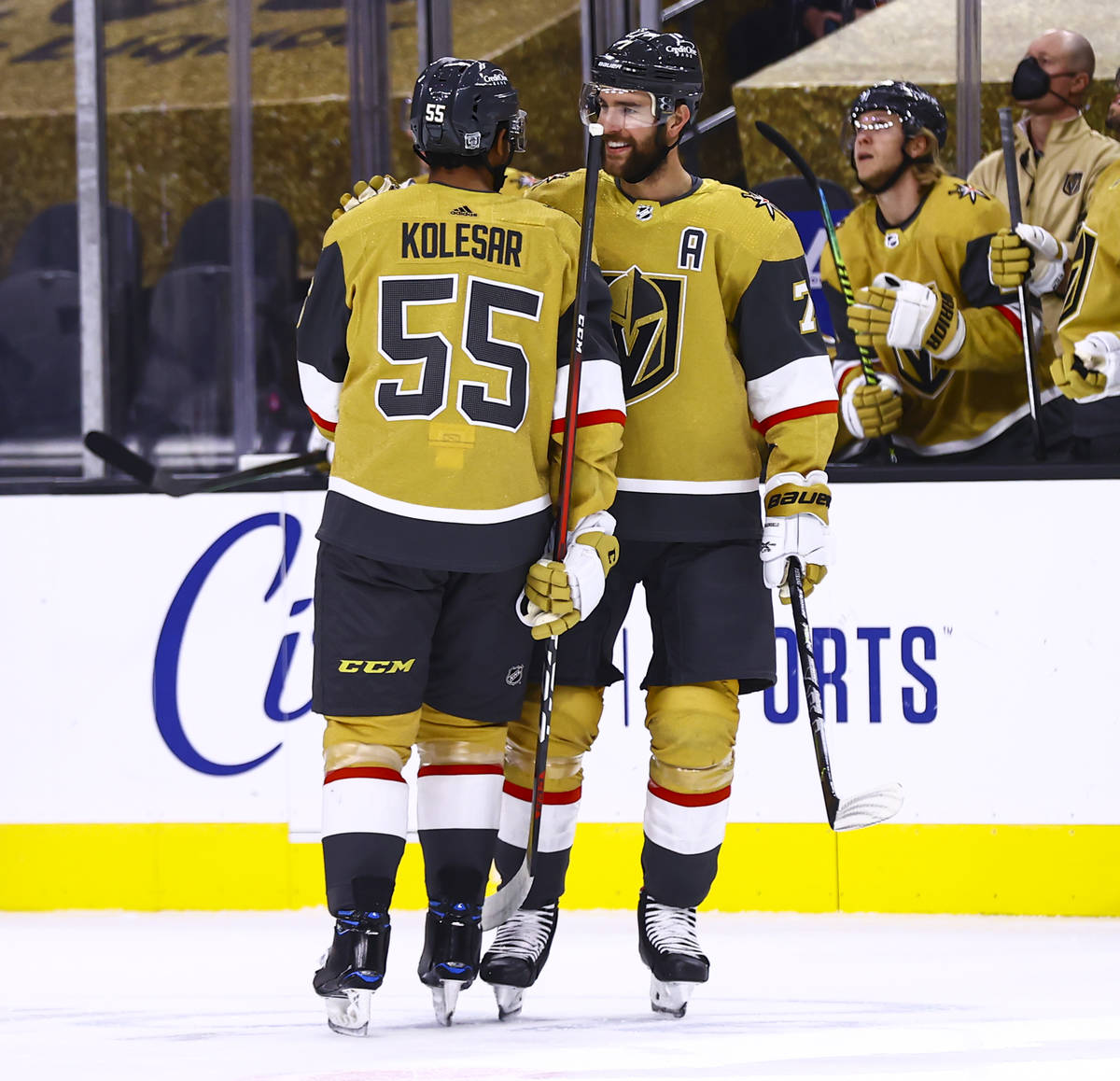 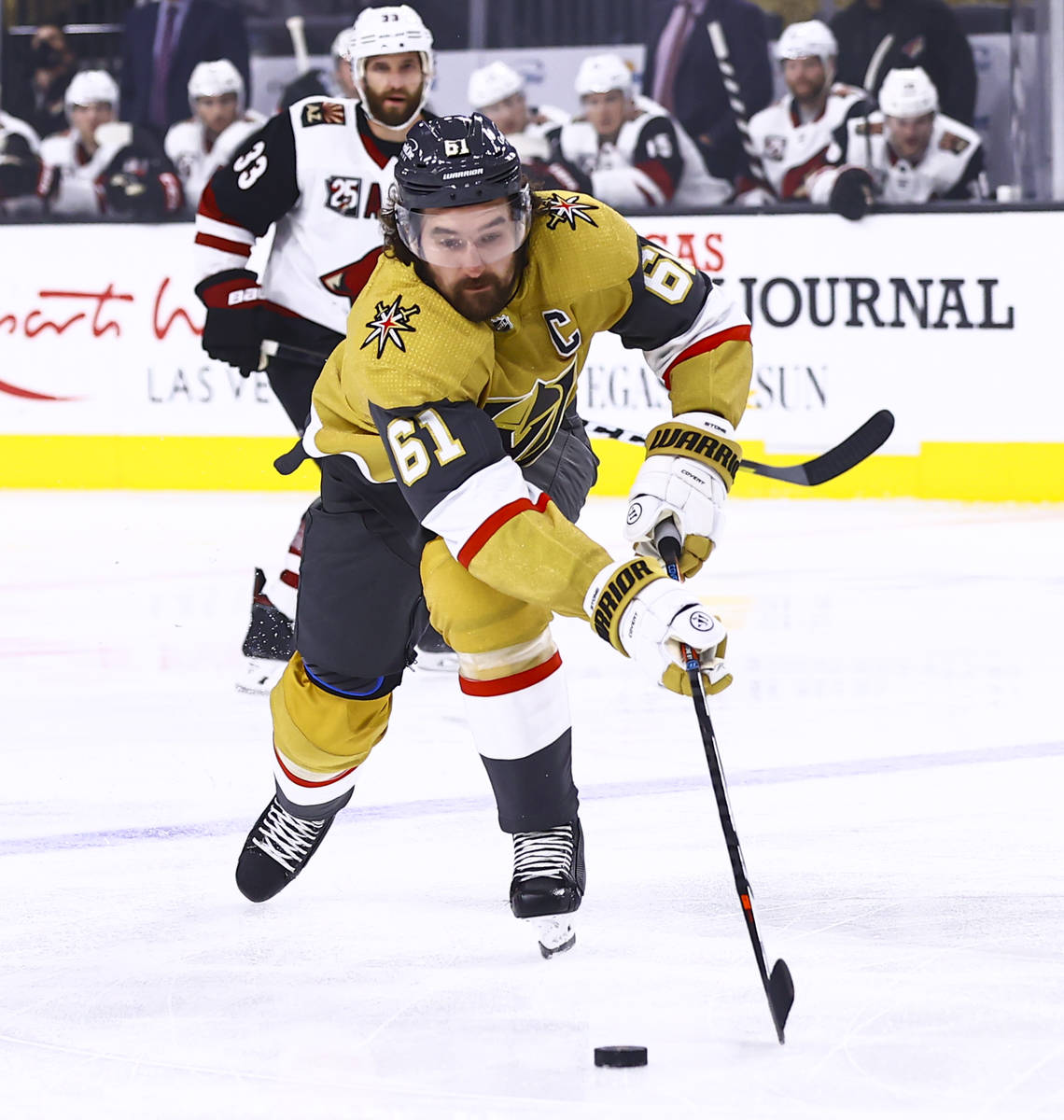 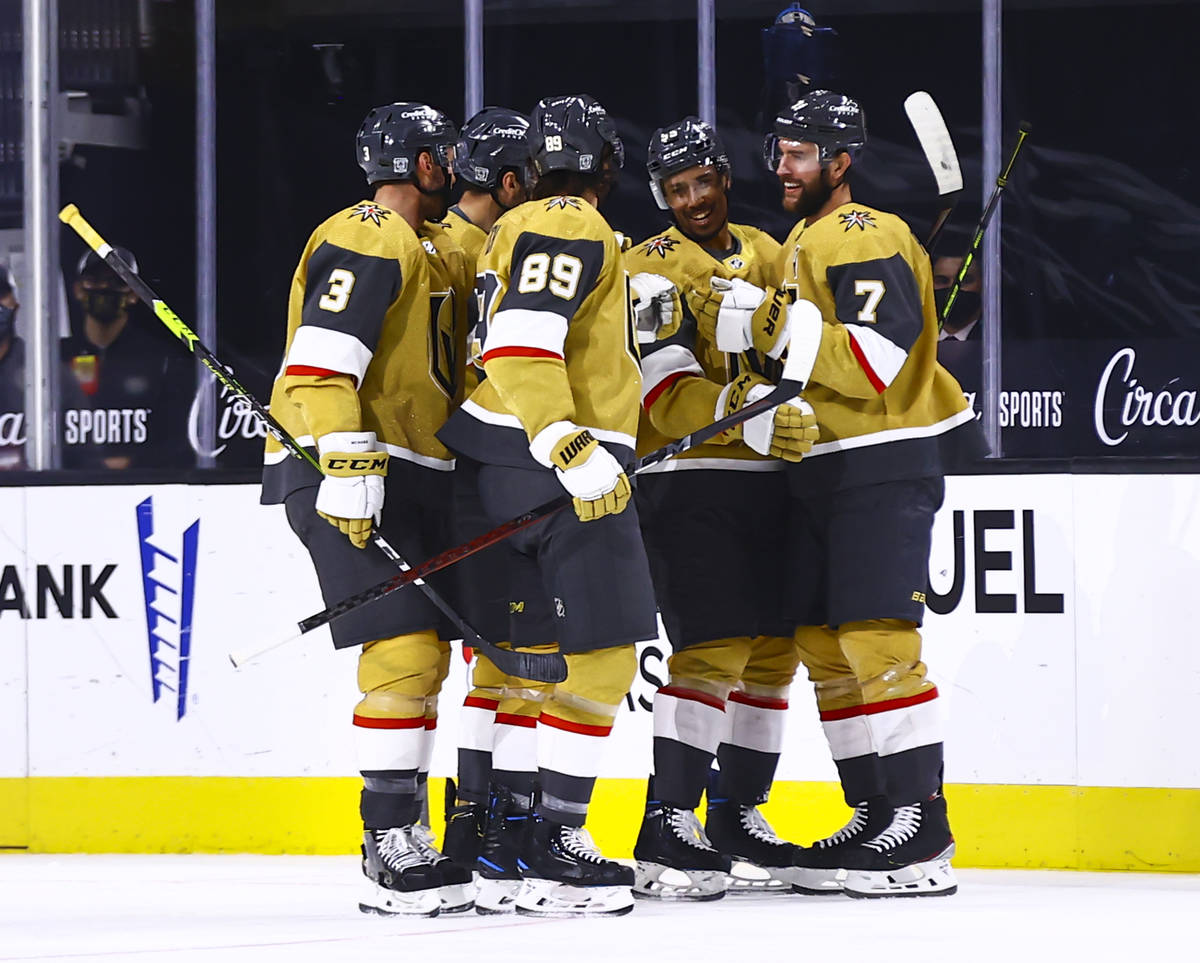 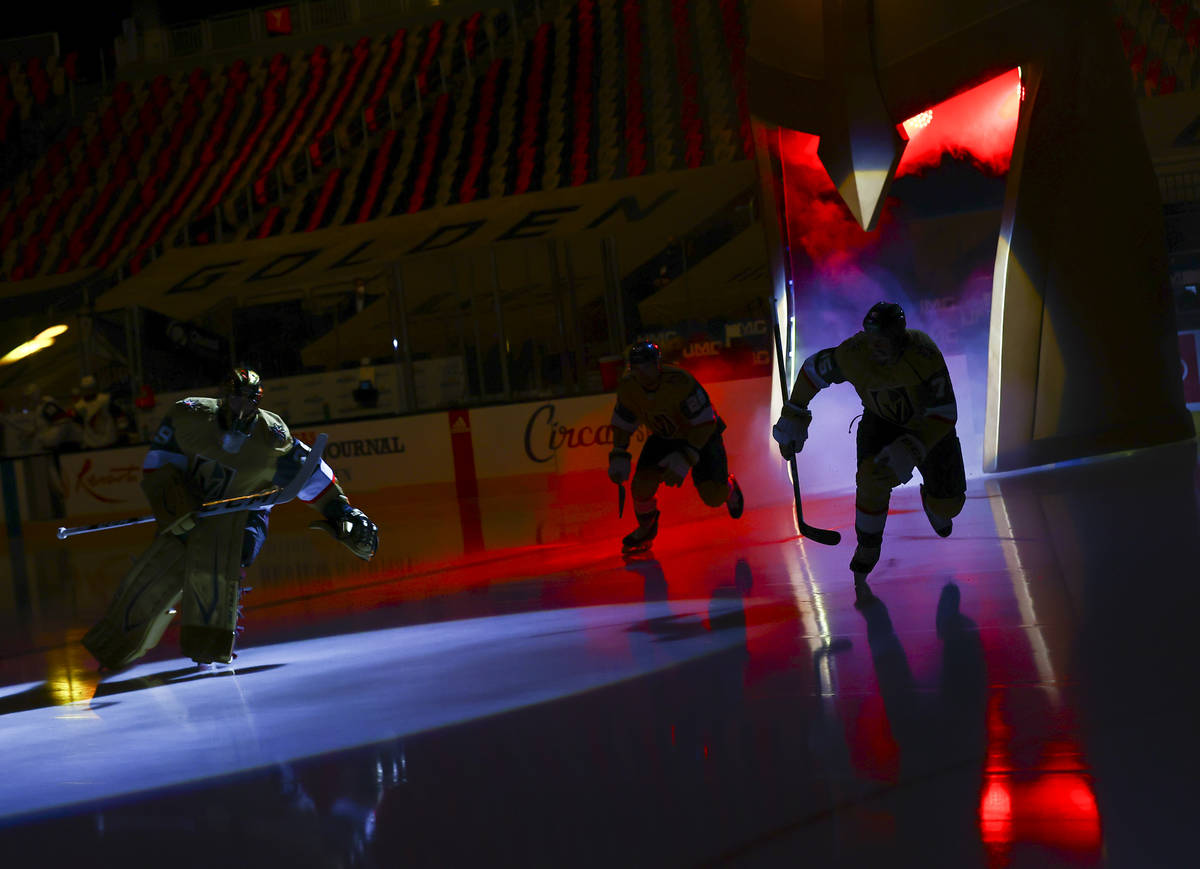 The Golden Knights warm up before taking on the Arizona Coyotes in an NHL hockey game at T-Mobile Arena in Las Vegas on Wednesday, Jan. 20, 2021. (Chase Stevens/Las Vegas Review-Journal) @csstevensphoto 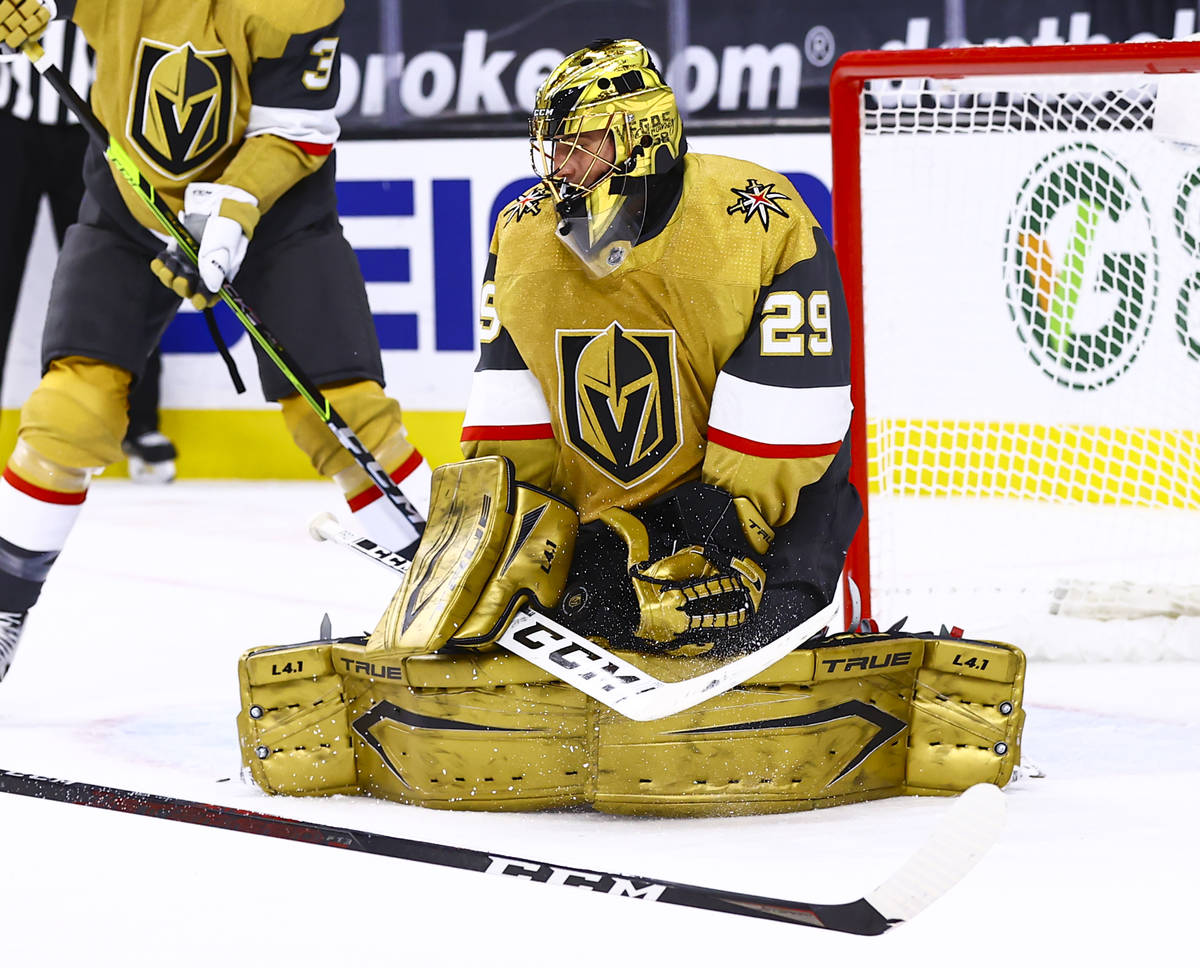 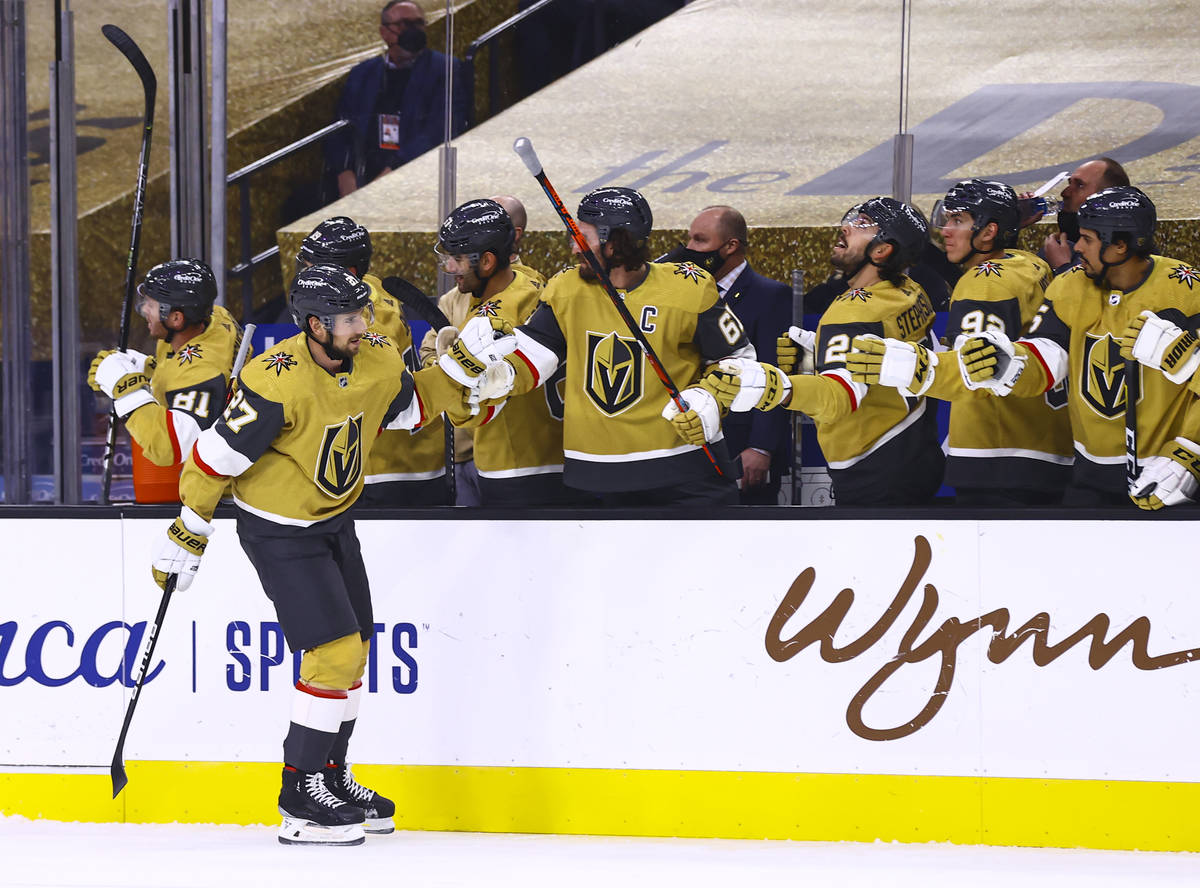 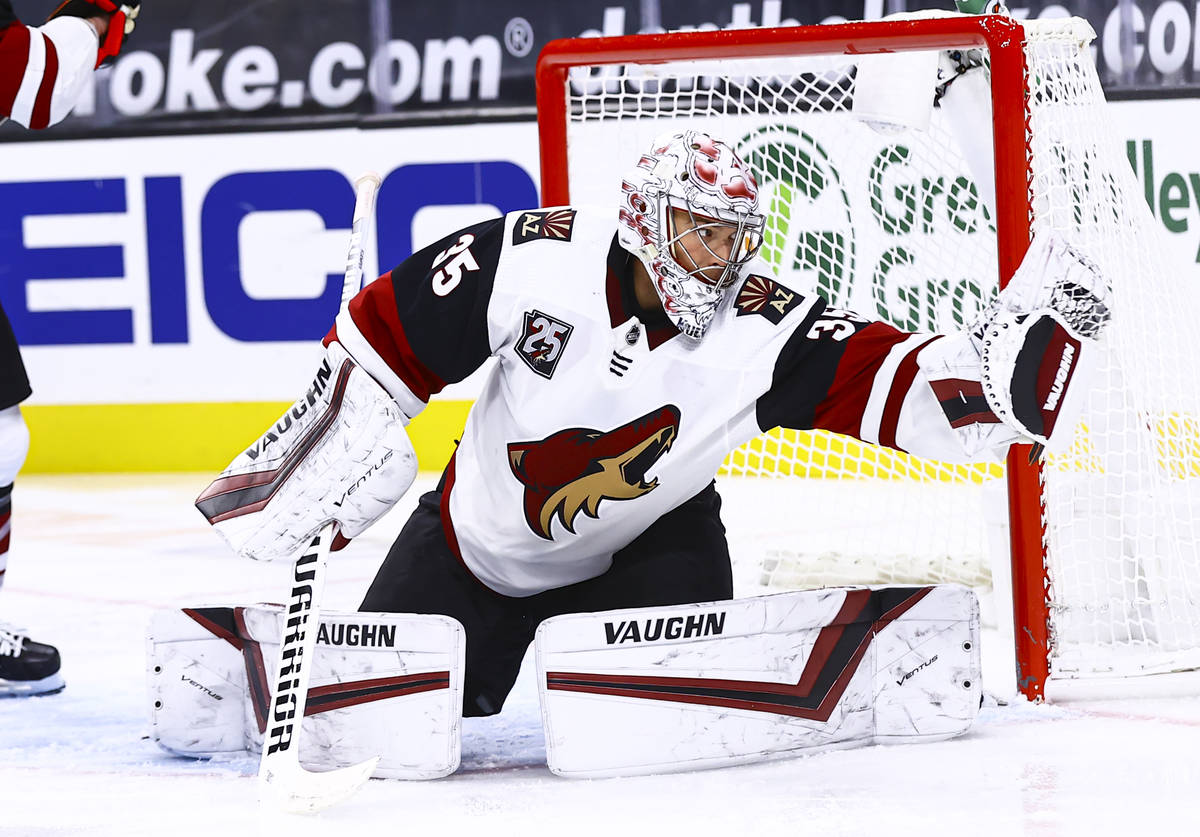 Arizona Coyotes goaltender Darcy Kuemper (35) makes a save against the Golden Knights during the second period of an NHL hockey game at T-Mobile Arena in Las Vegas on Wednesday, Jan. 20, 2021. (Chase Stevens/Las Vegas Review-Journal) @csstevensphoto 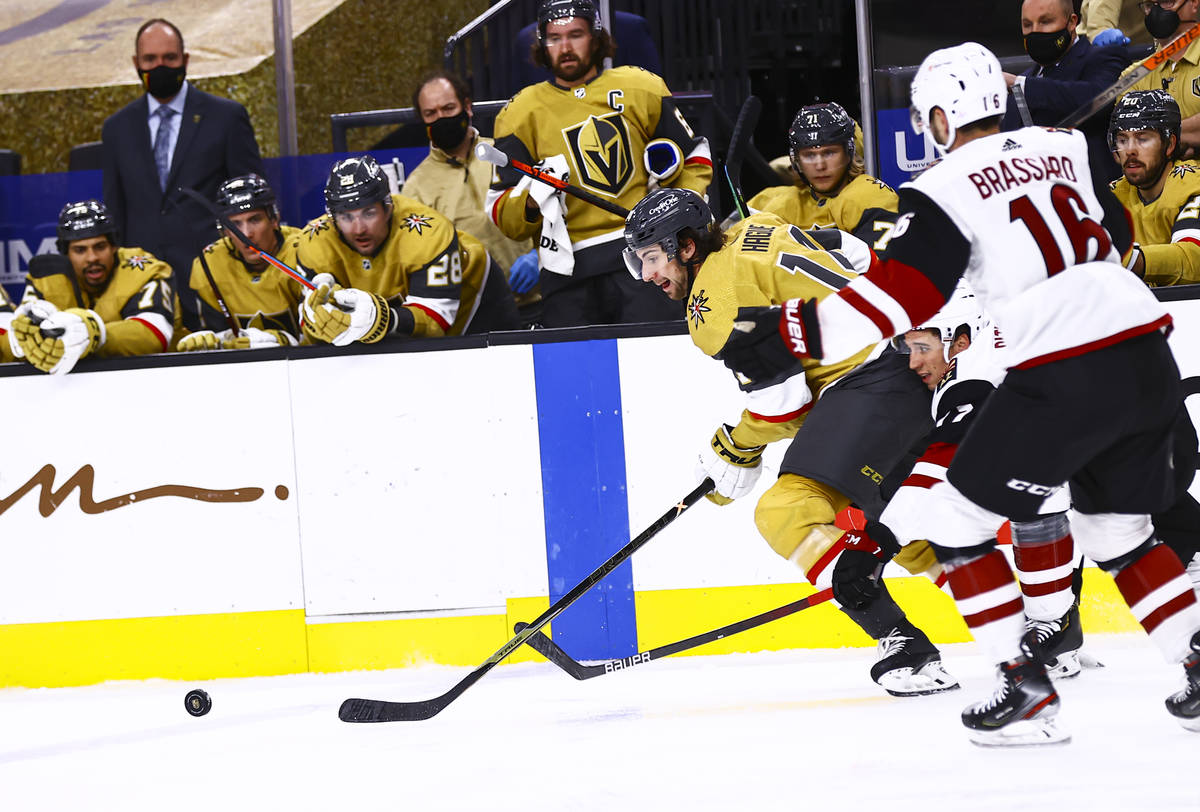 Golden Knights defenseman Nicolas Hague (14) skates with the puck during the second period of an NHL hockey game against the Arizona Coyotes at T-Mobile Arena in Las Vegas on Wednesday, Jan. 20, 2021. (Chase Stevens/Las Vegas Review-Journal) @csstevensphoto 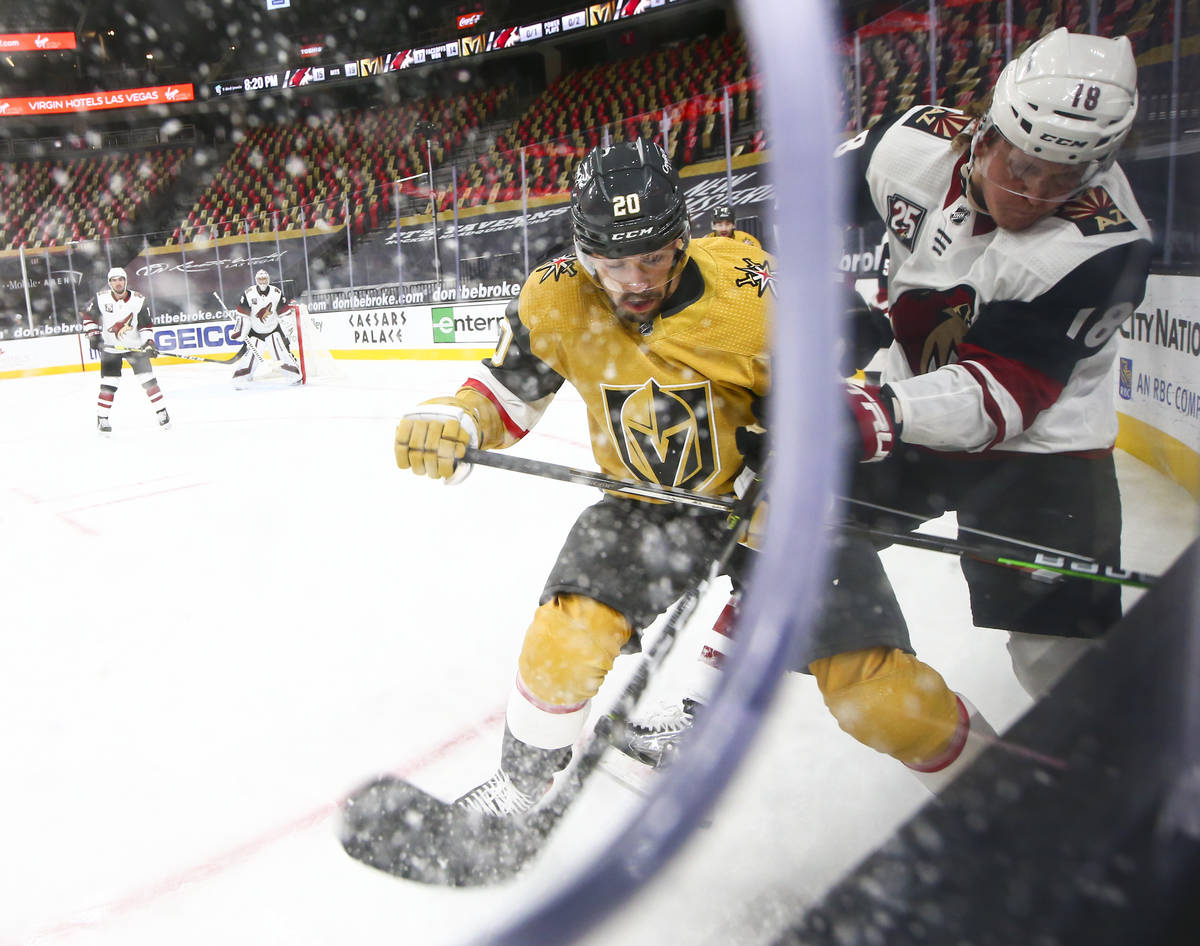 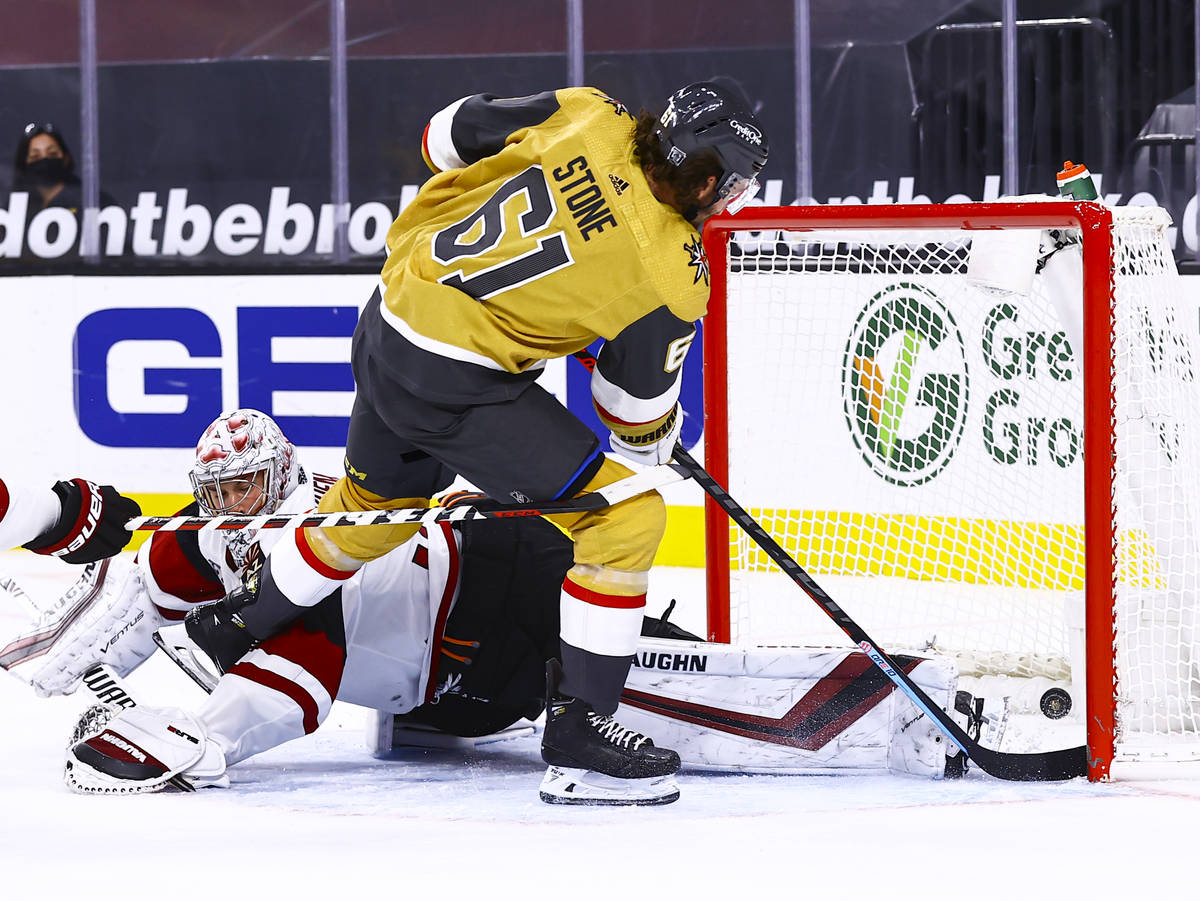 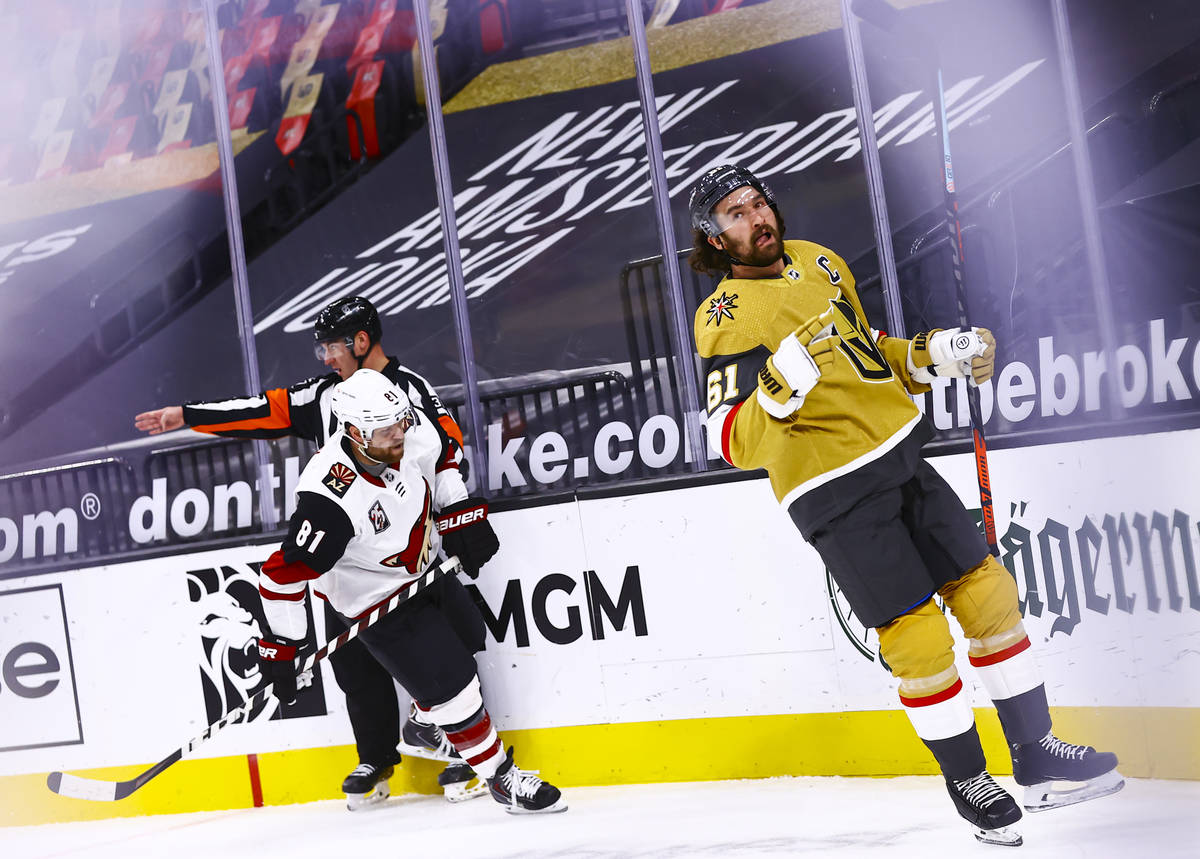 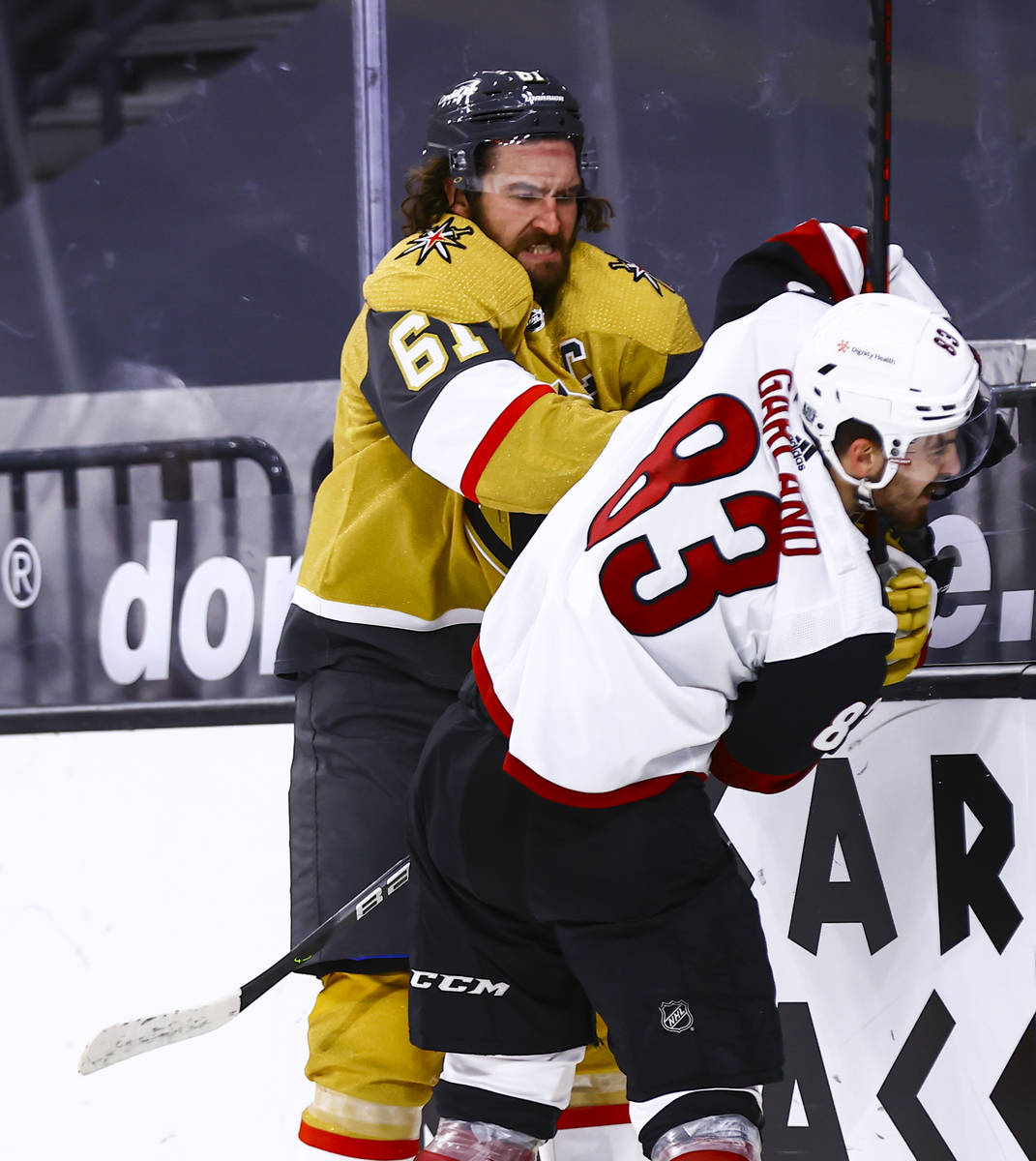 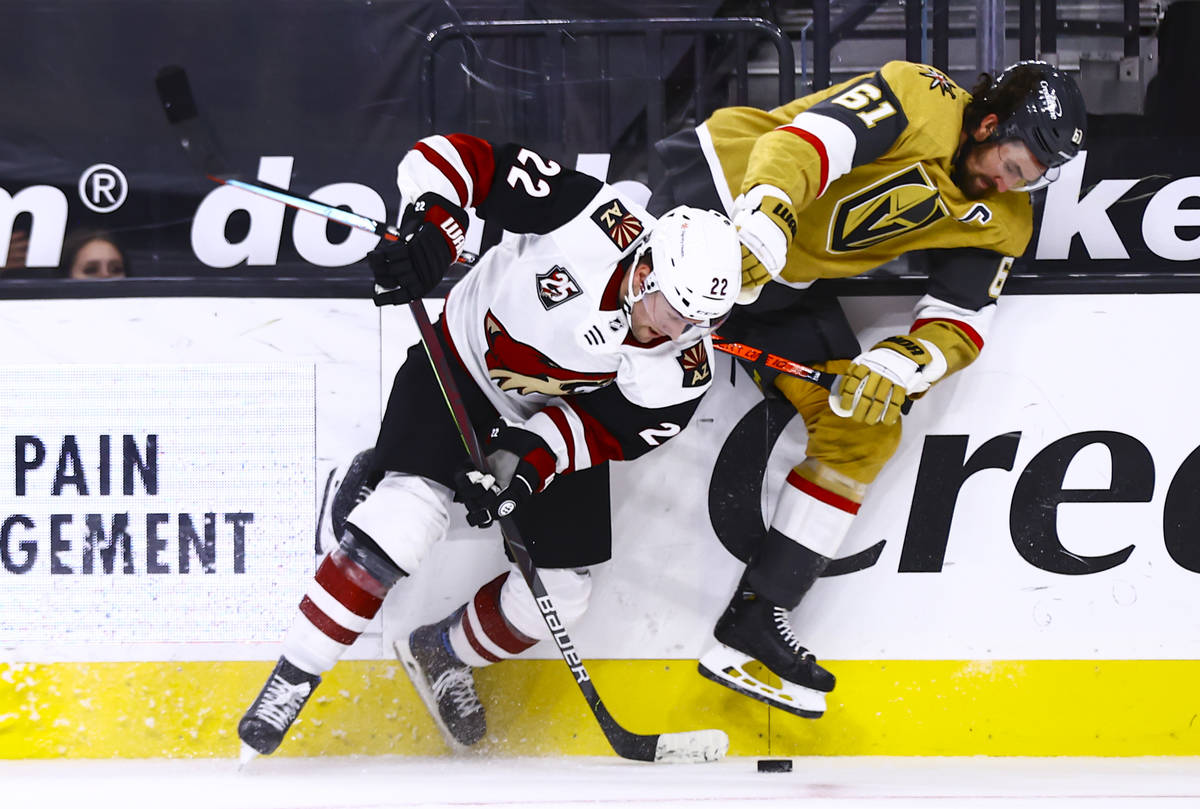 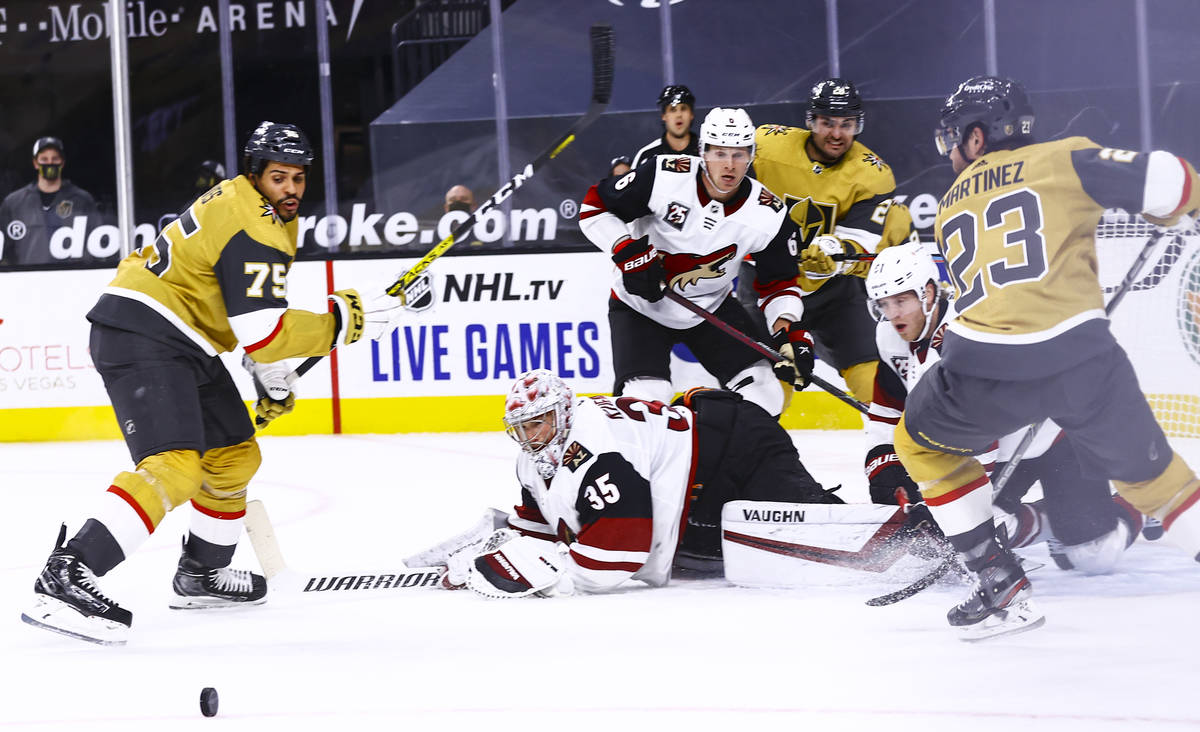 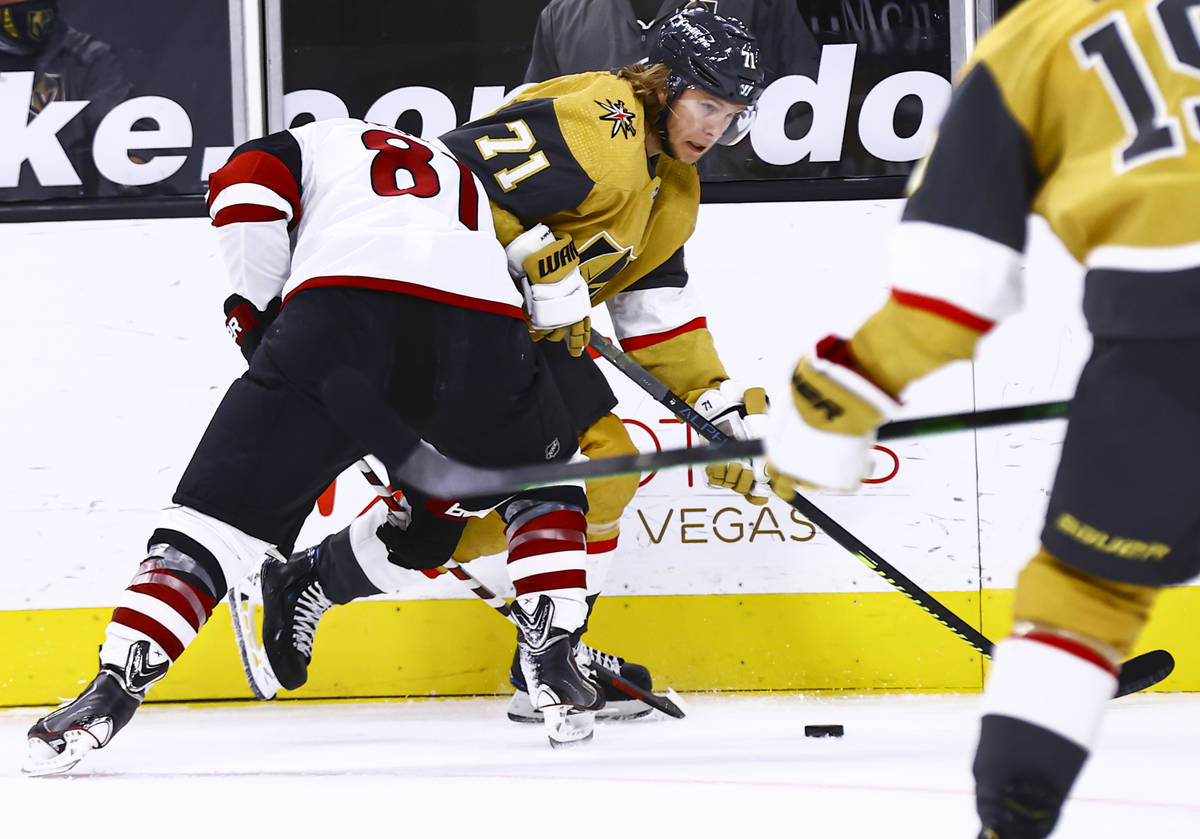 Alex Pietrangelo’s birthday present came two days late in the form of a goal on Wednesday. Almost as soon it arrived, his gift disappeared.

Pietrangelo scored for the first time in a Golden Knights uniform during the first period of a 5-2 victory over Arizona, and Coyotes defenseman Niklas Hjalmarsson immediately dug the puck out of the net and flipped it over the glass.

That set off a scavenger hunt in the lower bowl of T-Mobile Arena that eventually ended when the puck was found late in the period.

“We were talking before the game that I hadn’t got one yet in three games,” Pietrangelo said. “First game with my kids here, too. Felt like I was going to score, so it’s funny how things work out.”

Shea Theodore scored twice on a big night for the Knights’ defensemen, who contributed six points. Alex Tuch added a goal and two assists in the Knights’ most complete effort of the young season.

Mark Stone finished with a goal and an assist as the Knights improved to 4-0 for the first time in franchise history.

The series shifts to Arizona for two games starting Friday.

“We looked at the schedule and knew we had an opportunity to get off to a good start with four games at home,” Stone said. “We haven’t quite played our best hockey, but tonight was our best. The first three we kind of eased into it a little bit, a little bit of exhibition-style hockey getting the kinks out. I think we’re playing well right now.”

Fleury wasn’t tested often with 21 stops, but made a sprawling save in the first period on Johan Larsson moments before Pietrangelo’s goal.

He also received help from defenseman Zach Whitecloud, who gloved a rebound and tossed the puck through his legs after Fleury stopped a second-period odd-man rush.

“Tonight was just better for a full 60 minutes,” Fleury said. “We’re not going to win them all, but if we can keep improving on our game and getting better as a team, we’ll do well.”

The Knights scored on their first shot on goal at 5:18 of the first period, as Theodore unloaded a one-timer from the right circle.

Pietrangelo, who turned 31 on Monday, put the Knights up 2-0 at 8:33 of the first when he pinched below the hashmarks to collect a rebound and fired a missile from the right faceoff circle that overpowered Coyotes goaltender Darcy Kuemper.

“Leading up to tonight, as a (defense) corps we talked about trying to create a little bit more,” Pietrangelo said. “Create some more space for our forwards, maybe get some more shots, try to be a little tighter in the (offensive) zone, and we did that. It’s part of the reason we scored is we followed the play.”