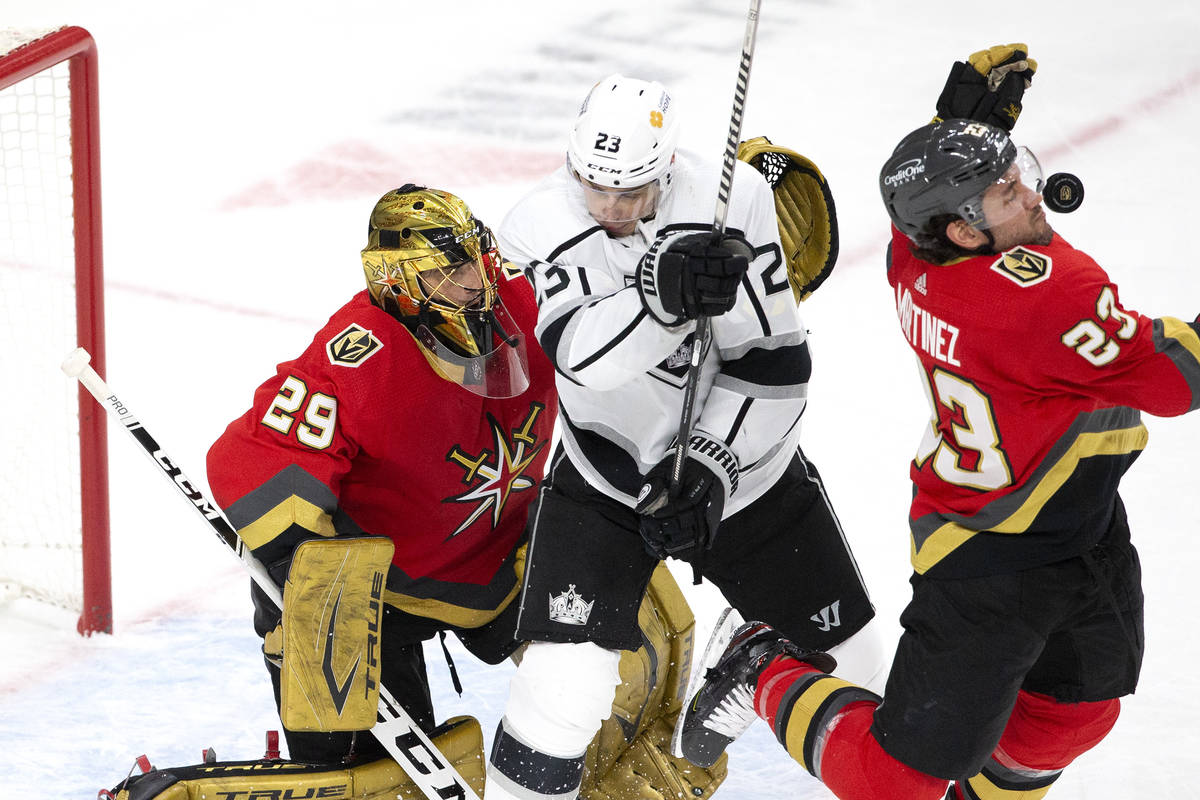 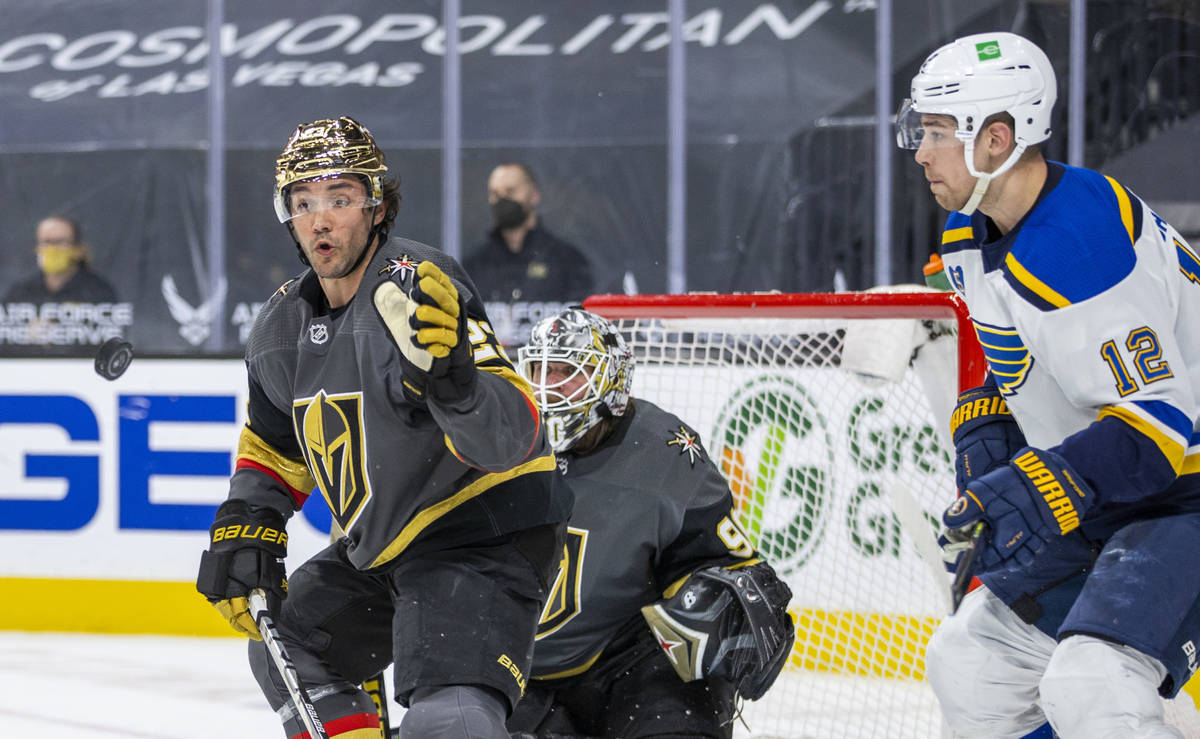 Golden Knights defenseman Alec Martinez (23) eyes a puck to slap down with St. Louis Blues left wing Zach Sanford (12) moving in during the third period of an NHL game at the T-Mobile Arena on Friday, May 7, 2021, in Las Vegas. (L.E. Baskow/Las Vegas Review-Journal) @Left_Eye_Images

The Golden Knights officially welcomed their “warrior” back to the fold Wednesday, and he expects to be ready for training camp.

Defenseman Alec Martinez signed his three-year extension with a $5.25 million average annual, two days after agreeing to terms. It kept the 34-year-old off the market before NHL free agency opened.

Martinez, who earned his nickname from teammates for his fearlessness in blocking shots, said he was “really happy” to re-sign with the Knights. He also said that while he’s adapted some of his offseason workouts to rehab the broken foot he played on in the playoffs, it’s a “nonissue” in regards to his availability next season.

“I wanted to be back,” Martinez said. “I believe in the room that we have, and I believe that we can get it done. And I wanted to be here. I wanted to continue to be a part of that. It wasn’t necessarily anything contractwise that was most important to me. It was getting an opportunity to fight for a Stanley Cup with this group again.”

General manager Kelly McCrimmon said keeping Martinez was a priority after he played some of the best hockey of his career following his Feb. 19, 2020, trade from Los Angeles to Las Vegas for two second-round picks. Martinez has been a strong left-side partner for Shea Theodore and Alex Pietrangelo, and a key voice in the locker room.

The two-time Stanley Cup winner led the NHL in blocked shots in the regular season with 168, 40 more than the next-closest player. He also led the league in the playoffs with 72 despite his injury.

Martinez showed a renewed offensive spark with the Knights, too. His 32 points were the second-highest total of his career despite the shortened schedule.

Martinez’s contract gives him the second-highest cap hit among Knights defensemen, behind Pietrangelo.

“It was a really good trade for us … and he’s just had a resurgence where he’s likely played his best hockey as an NHL player right now,” McCrimmon said.

Nosek signed a two-year contract with a $1.75 million average annual value with the Boston Bruins. The 28-year-old was an expansion draft selection with the Knights and scored the first regular-season goal in T-Mobile Arena history Oct. 10, 2017.

Nosek finished with 65 points in 240 games with the team, including 18 in 38 games last season. The Knights have just five players from their first game still on their roster — center William Karlsson, right wing Reilly Smith, defenseman Brayden McNabb, and left wings Jonathan Marchessault and William Carrier.

Quinney, the only Nevada-born player to appear in an NHL game, received a one-year deal with a $750,000 NHL cap hit. The 25-year-old had 17 points in 19 American Hockey League games last season.

“Gage Quinney had battles with health over the course of the year, but was likely the top call-up coming out of our main training camp,” McCrimmon said. “I thought he had an exceptional camp with our team.”

Murphy, the AHL’s defenseman of the year, joined the Detroit Red Wings. Dahlstrom signed with the Toronto Maple Leafs, and Schuldt left for the Buffalo Sabres.

The Knights have younger defensemen ready for roles in Layton Ahac and Peter DiLiberatore, who ended their college careers last season, and Kaedan Korczak, who is eligible to be in the AHL full time next year. The team’s only remaining free agents are restricted free agents Nolan Patrick and Dylan Coghlan.

“Really important for me that we get Dylan Coghlan into more games, so he’ll be a guy that we need to help continue to develop,” McCrimmon said.