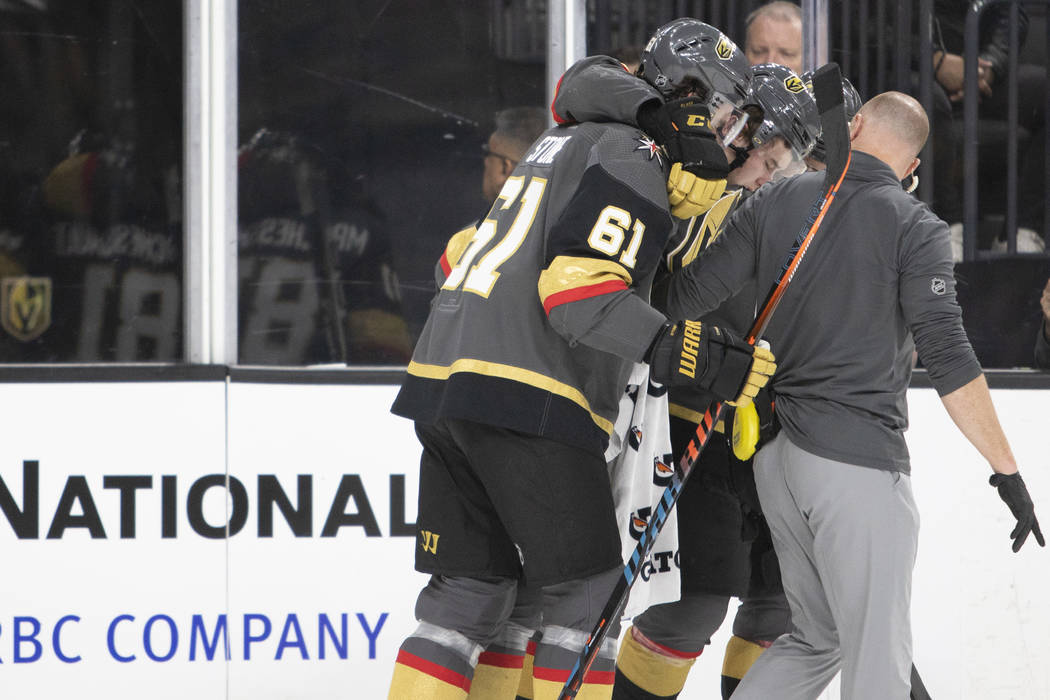 Golden Knights center Cody Glass (9) is carried off the ice by teammates Mark Stone (61) and Jonathan Marchessault (81) during the second period of the game against the New York Rangers on Sunday, Dec. 8, 2019, at T-Mobile Arena, in Las Vegas. (Ellen Schmidt/Las Vegas Review-Journal) @ellenkschmidt_ 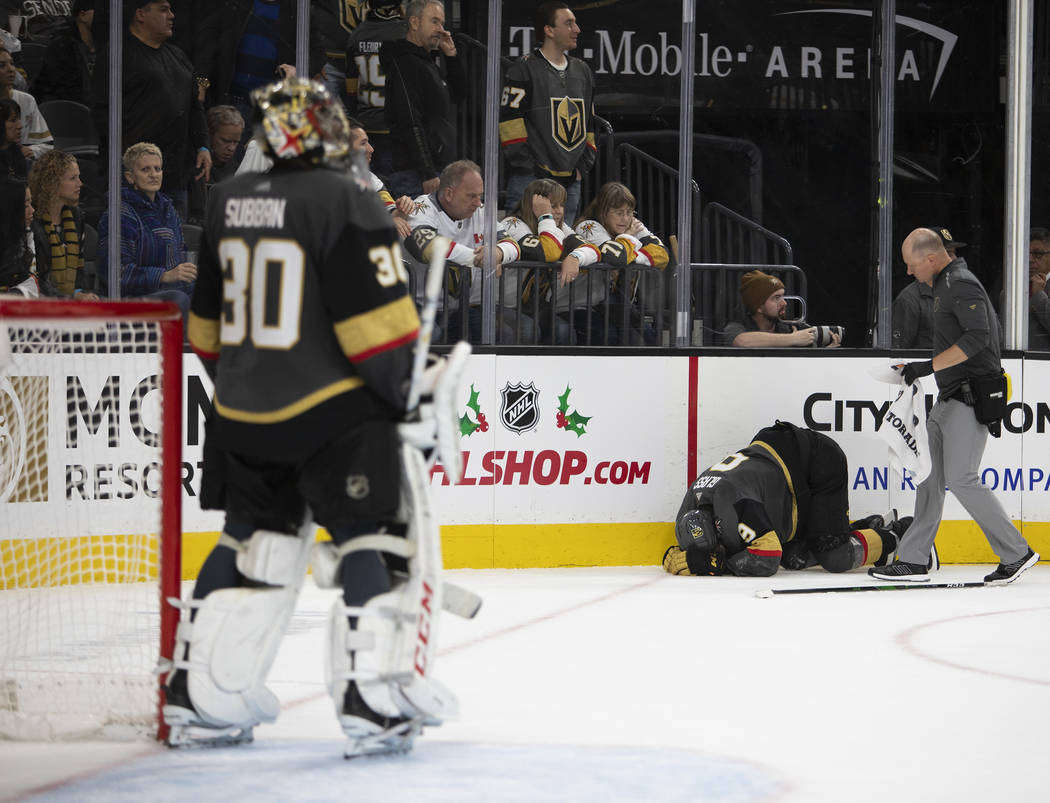 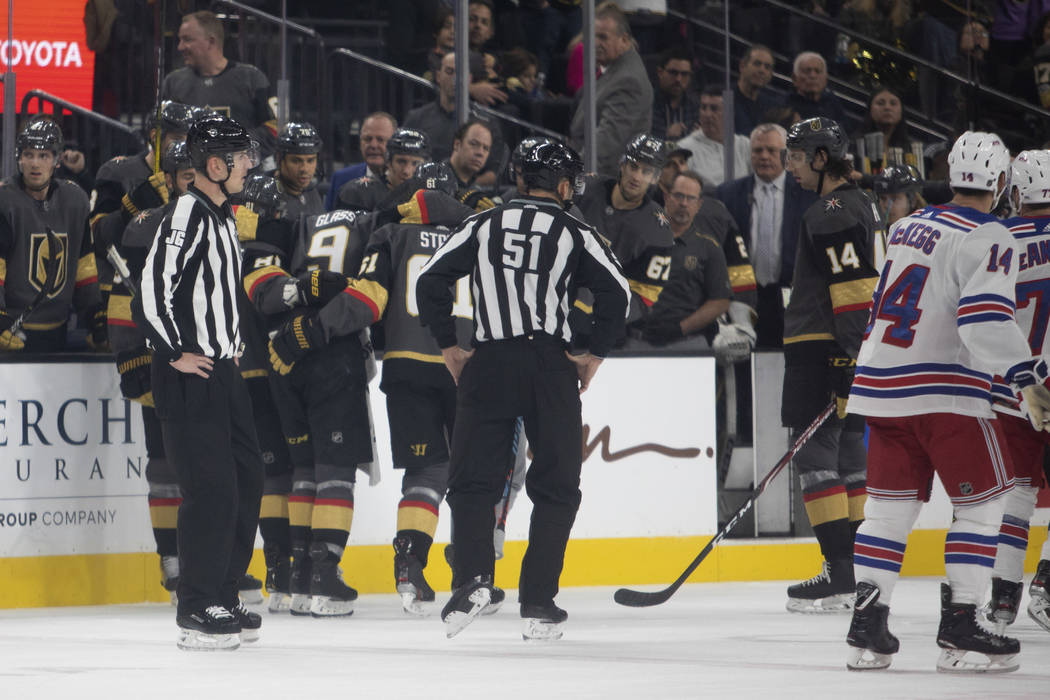 Golden Knights center Cody Glass (9) is carried off the ice by teammates Mark Stone (61) and Jonathan Marchessault (81) during the second period of the game against the New York Rangers on Sunday, Dec. 8, 2019, at T-Mobile Arena, in Las Vegas. (Ellen Schmidt/Las Vegas Review-Journal) @ellenkschmidt_

Rookie center Cody Glass was ruled out for at least Tuesday’s game against Chicago, and his Golden Knights teammates were still fuming a day later about the hit that sidelined their “little brother.”

“From what I know, it’s an avoidable hit,” defenseman Brayden McNabb said Monday following practice. “It doesn’t need to happen, and now you’ve got a young guy who’s not playing and it’s crucial to his development. He’s a big part of our team. It’s a team that we only play twice and we’re done. I guess you could say it’s part of hockey, but it’s unfortunate.”

Glass was knocked out of Sunday’s 5-0 loss to the Rangers late in the second period when left wing Brendan Lemieux finished his check with a wild follow-through, elbowing the 20-year-old in the head.

Glass was not at City National Arena on Monday morning, according to coach Gerard Gallant, and there was no further update from the team except to confirm it’s an upper-body injury.

The NHL fined Lemieux $2,000 for the hit; no penalty was called on the play.

The pesky Lemieux takes after his father, Claude, who during his NHL career owned a black belt in getting under opponents’ skin.

He ranks second in the league with 59 penalty minutes and is tied with Anaheim’s Nicolas Deslauriers with an NHL-high five major penalties. Lemieux was suspended two games last season for a check to the head of Florida’s Vincent Trocheck.

McNabb and enforcer Ryan Reaves were among the Knights who confronted Lemieux after the play, and William Carrier dropped a glove, then the gloves, in the third period to fight Lemieux.

“Something had to be done, and I didn’t think he was going to fight me,” Reaves said. “(Carrier) knew what happened to Glass, who’s an upcoming star for this team, has to be handled and looked after.”

He had four points in five games with the Chicago Wolves.

With Glass out, Gallant said Chandler Stephenson will center the second line between wings Max Pacioretty and Mark Stone. Paul Stastny will skate between Alex Tuch and Carrier on the third line.

“We just want to change a few things up,” Gallant said. “There’s an opportunity now with some injuries to give (Stephenson a top-six role), and, hopefully, he elevates his game and gets to that level.”

Gallant said the team would decide Tuesday whether goaltender Marc-Andre Fleury would start against the Blackhawks. Fleury’s father died Nov. 27, and he has not appeared in a game in more than two weeks.

“He’s physically ready,” Gallant said. “You just want to make sure he gets enough shots and gets enough time on the ice.”

Also, center Cody Eakin remains week to week with an upper-body injury he sustained in a victory over Arizona on Nov. 29 and is not close to returning.

“He’s not ready to get on the ice yet, that’s for sure,” Gallant said.

■ Knights prospect Isaiah Saville, a freshman at Nebraska Omaha, was one of three goalies named to the U.S. National Junior Team preliminary roster for the World Junior Championship.

■ Fans can donate new and unwrapped toys for the Knights’ holiday Toy Drive starting at 4:30 p.m. at Toshiba Plaza before the game against the Blackhawks. Cash donations will also be accepted.