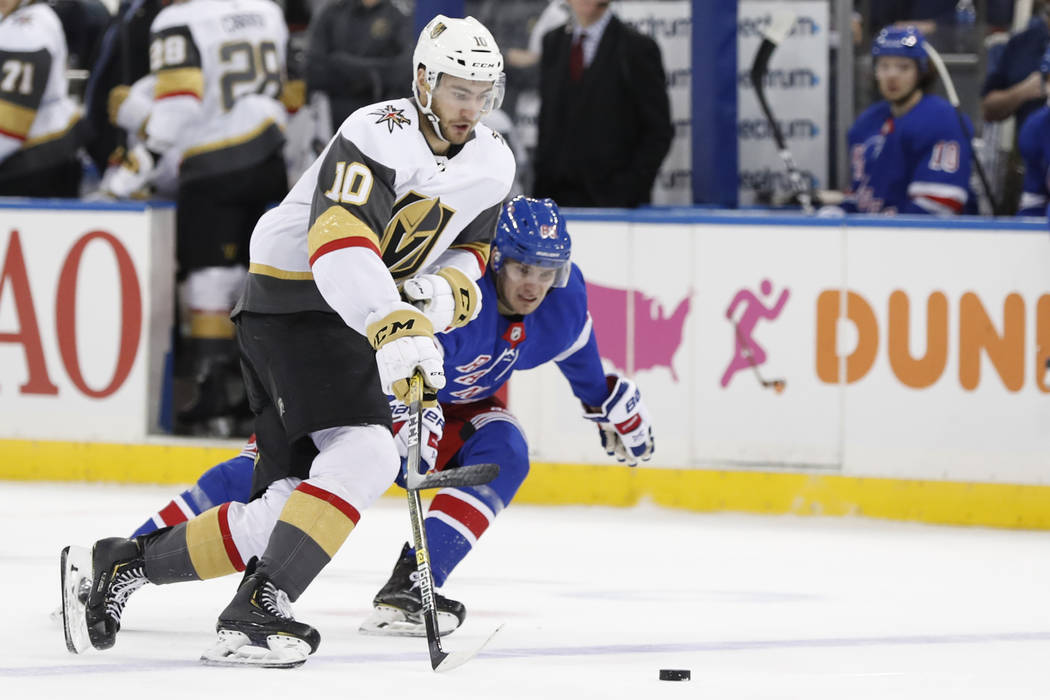 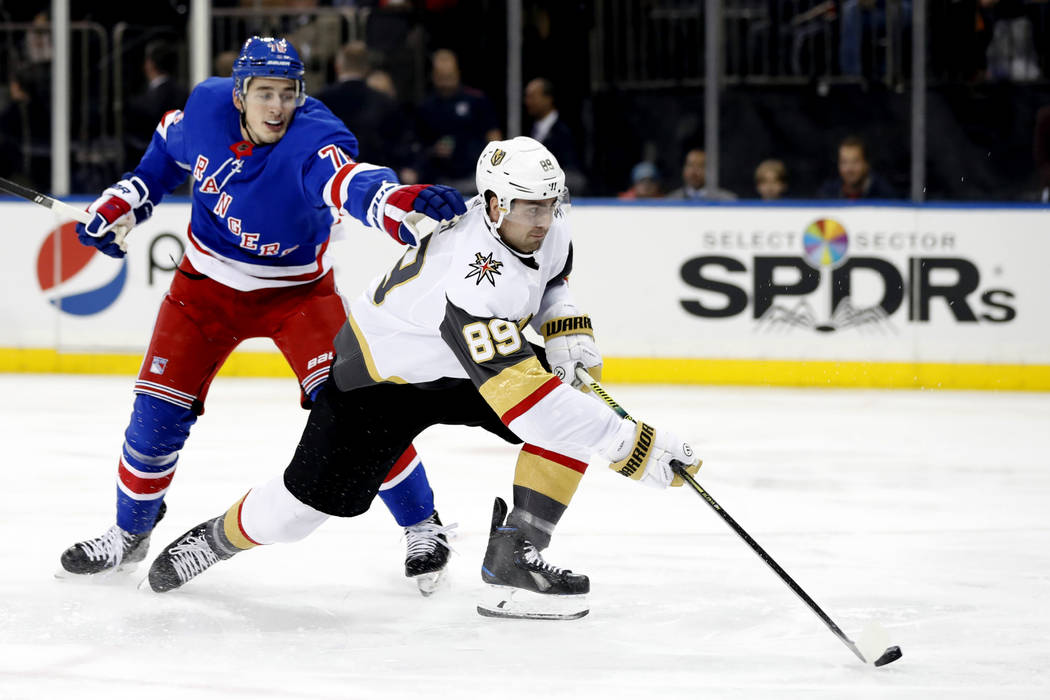 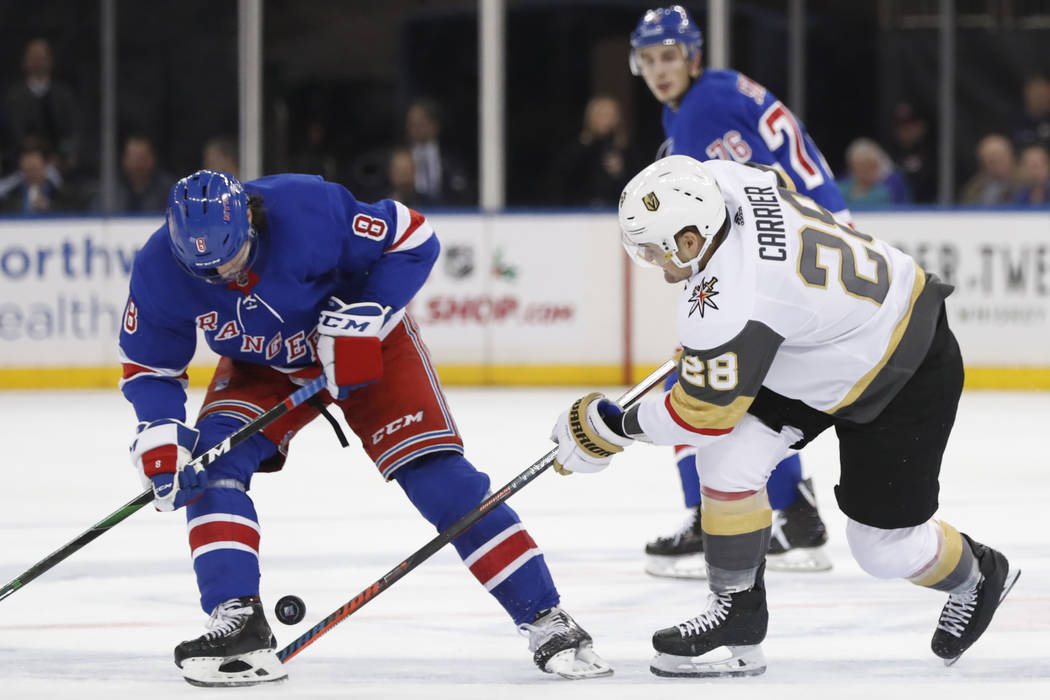 New York Rangers defenseman Jacob Trouba (8) searches for the puck as Vegas Golden Knights left wing William Carrier (28) gets his stick near it during the second period of an NHL hockey game, Monday, Dec. 2, 2019, in New York. (AP Photo/Kathy Willens) 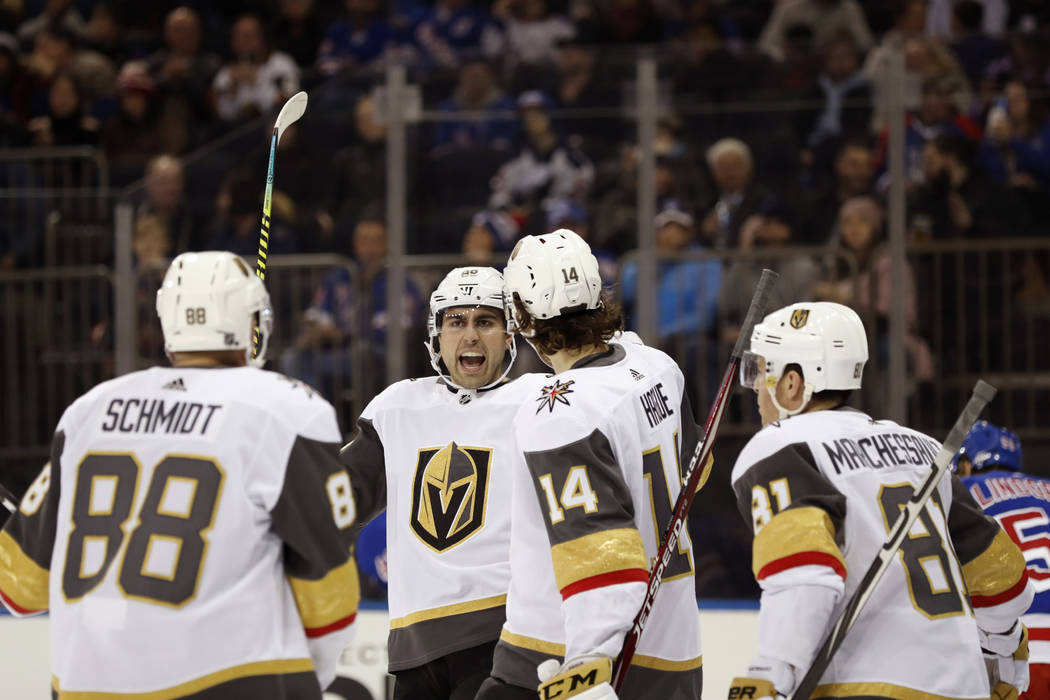 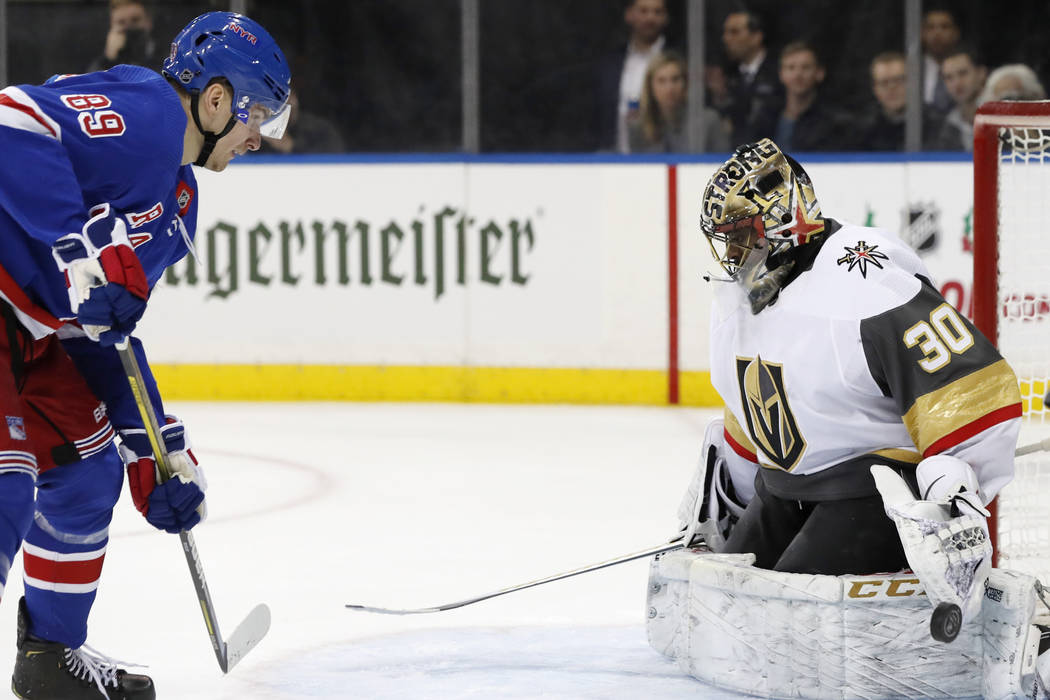 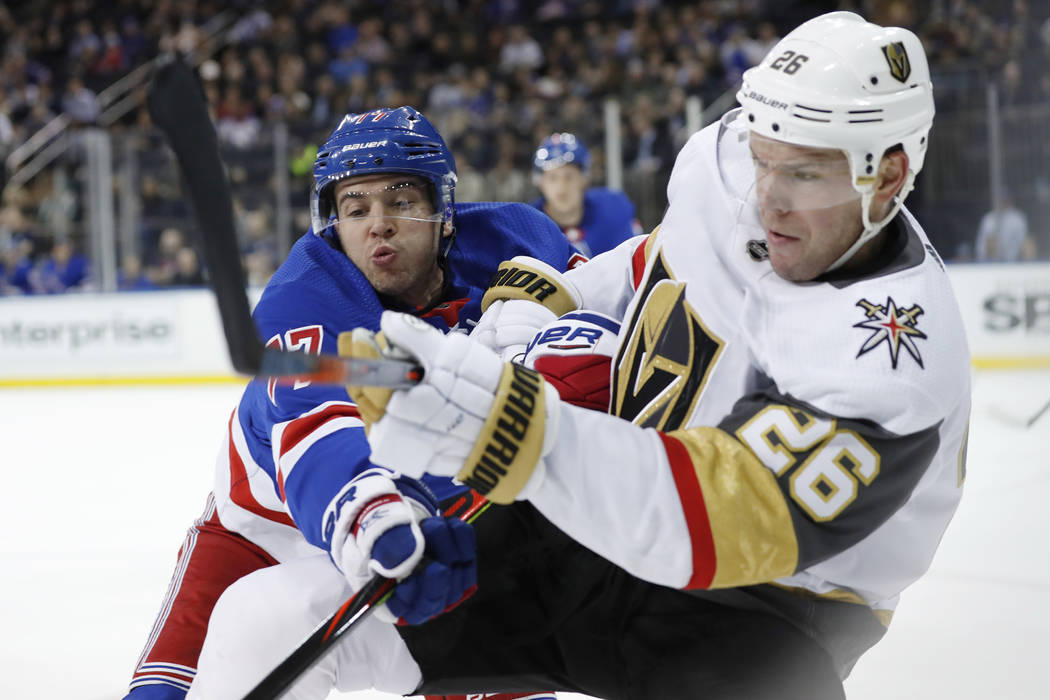 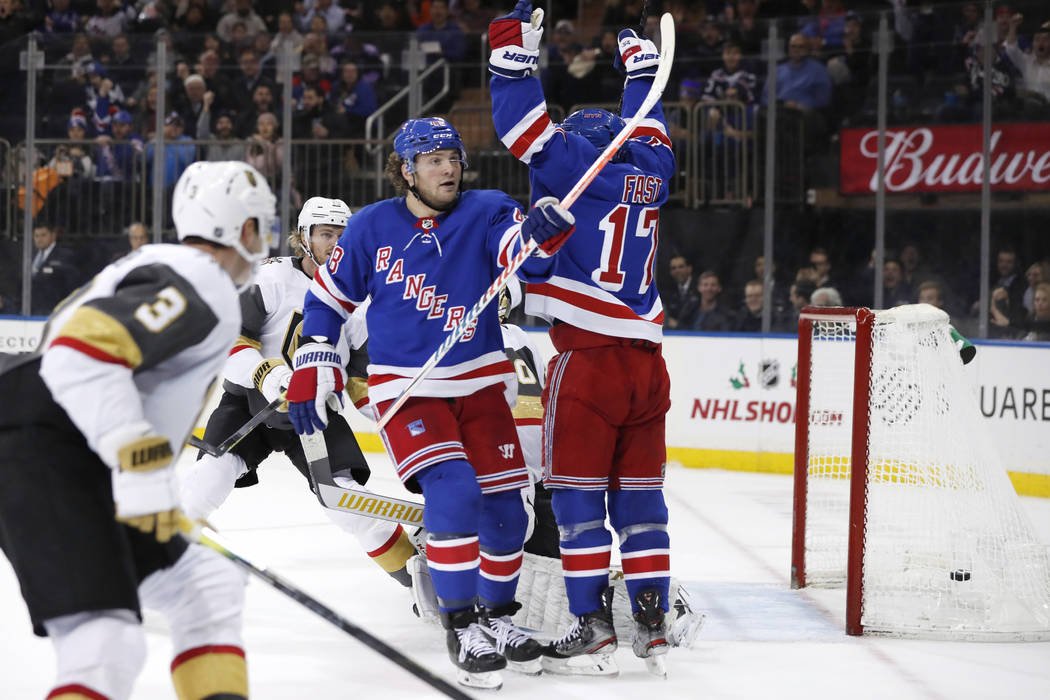 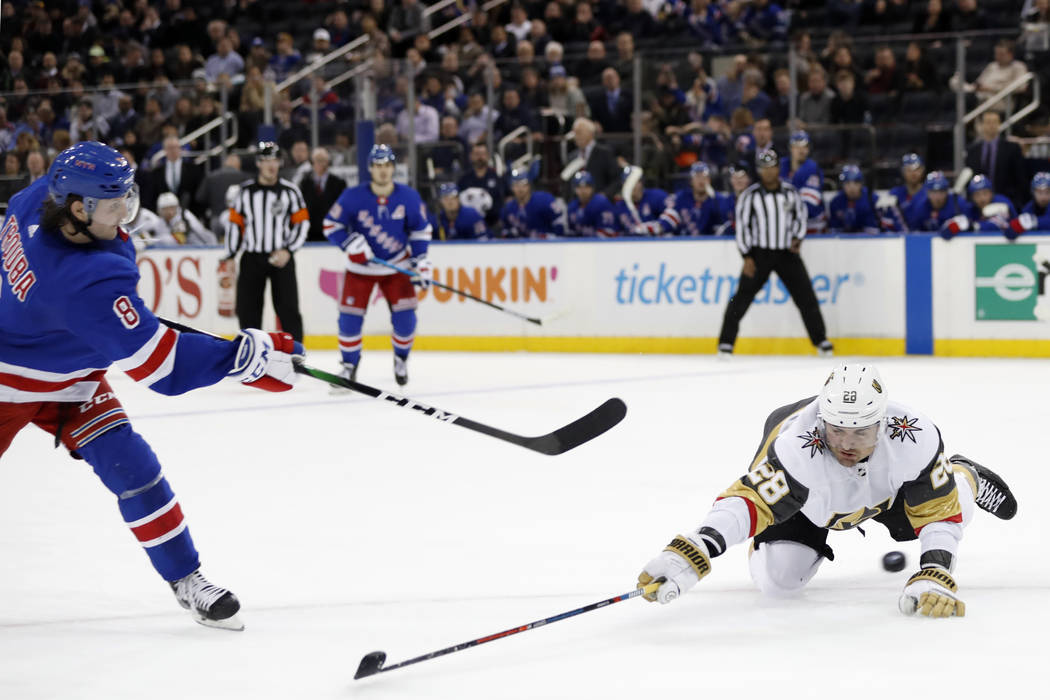 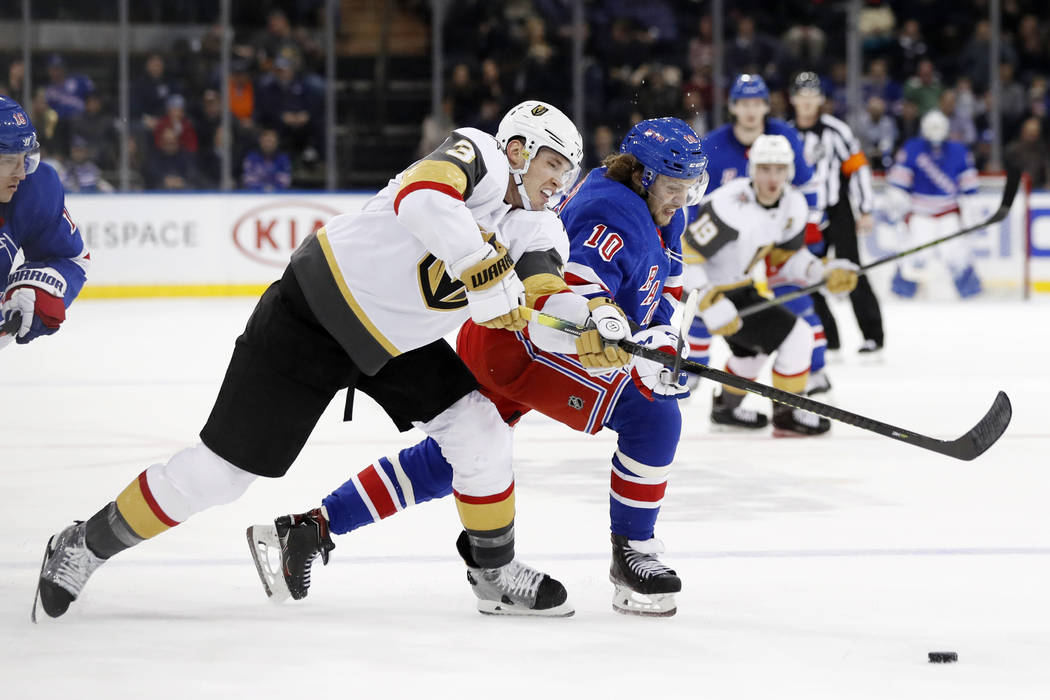 NEW YORK — Alex Tuch started to raise his arms in celebration but quickly put them down because wasn’t sure whether he scored the Golden Knights’ opening goal Monday.

He left no doubt the second time.

Tuch bagged two goals in the opening 3:50 of the first period as the Knights knocked off the New York Rangers 4-1 at Madison Square Garden to extend their win streak to a season-long three games.

“I expect (Tuch) to be a 30-goal scorer,” coach Gerard Gallant said. “He played hard and he played well, and when he shoots pucks like that, they’re going to go in the net.”

Max Pacioretty, on a power play, and Reilly Smith also scored for the Knights, who play the second game of the back-to-back Tuesday at New Jersey.

Malcolm Subban made his fourth straight start and finished with 29 saves.

“The fast start was important for us,” Smith said. “I think that was the main difference. We really wanted to focus on a getting a big start and I think we came out with a lot more energy.”

Tuch, who was raised in upstate New York and had several friends and family in attendance, scored the overtime winner in the Knights’ visit to Madison Square Garden last December. He has three goals and two assists in three career games at the world’s most famous arena.

He put the Knights ahead 1:34 into the game when he streaked down the left wing and his shot went off the glove of Rangers goaltender Henrik Lundqvist. The puck sat in the crease momentarily, and as Lundqvist tried to cover up, he accidentally kicked it across the goal line.

“No idea,” Tuch said when asked if he knew he scored. “Then the guys came over and told me they didn’t touch it and that it was in the net. I’ll take it.”

Tuch added his third goal in the past two games on the power play a little more than two minutes later when he redirected Nate Schmidt’s pass on the rush.

“Not a bad arena to score a couple game-winning goals in,” Tuch said. “This is a special place, and that’s pretty cool.”

Here’s what stood out in the Knights’ win:

Cody Glass made a dazzling no-look pass to Mark Stone for a goal Oct. 15 against Nashville. But his ridiculous feed for Pacioretty’s goal in the second period was even better.

Glass took a pass from Mark Stone below the goal line on the left side, caught Pacioretty out of the corner of his eye and, without looking, whipped the puck across the crease for a one-timer.

“I knew he was there,” Glass said. “I’d probably get yelled at if I didn’t know he was there. We practice that and obviously it was right spot, right time.”

The Rangers scored on the power play in 14 of their first 25 games and ranked 12th in the league entering Monday. It’s even more threatening since Mika Zibanejad returned from injury on Wednesday.

But the Knights successfully killed all six New York power plays and haven’t allowed a goal while short-handed in three straight games. They also went 2-for-2 with the man advantage against a Rangers team that killed 20 of its past 21 power plays.

“We did a pretty good job, I would say, of taking away their plays on the power play and their strengths,” Subban said. “That obviously goes a long way when you frustrate those guys.”

Tuch, who also drew the penalty before his second goal, wasn’t the only player who came out with plenty of jump.

The Knights fired 13 of their 32 shots on goal in the opening 7:29 of the first period, and the Rangers were never able to fully recover from the early onslaught.

“We keep playing like that,” Gallant said, “we’ll get more W’s.”