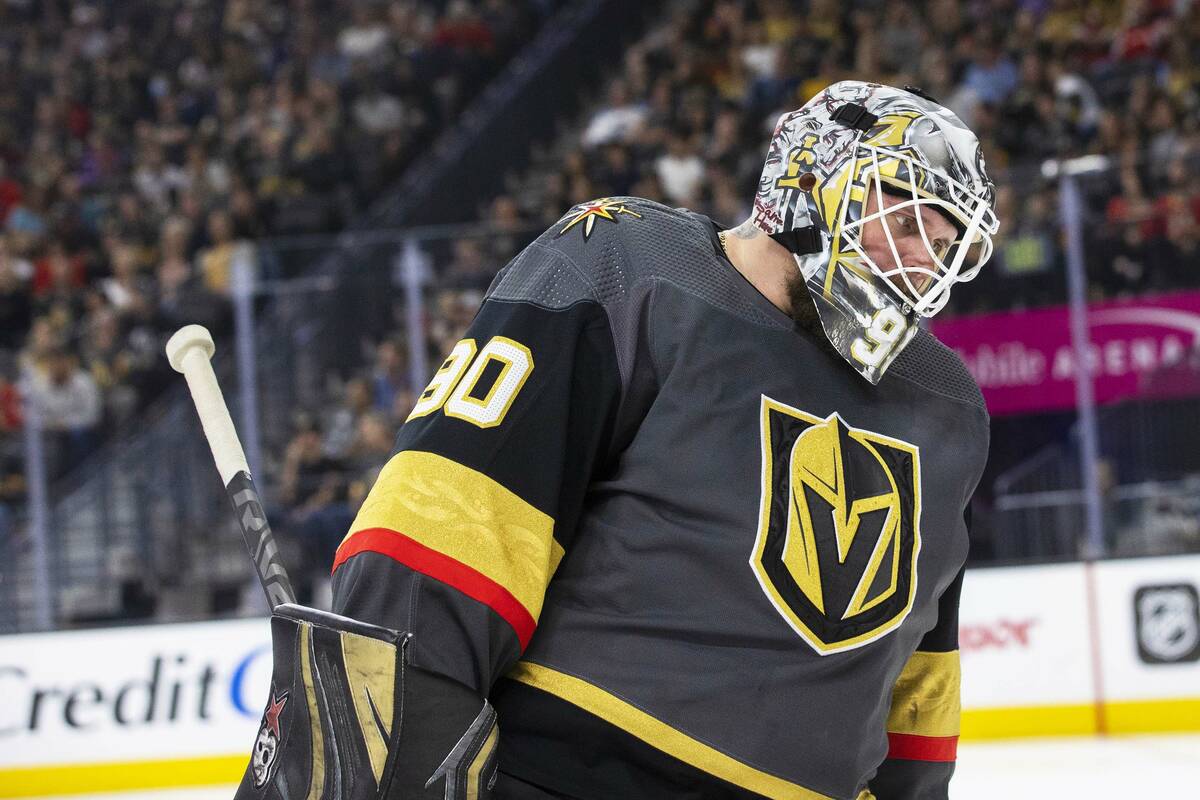 Never before have the Golden Knights released a statement minutes before the start of practice to announce a player was not participating because of a maintenance day.

But they did Saturday, only adding to the confusion about the status of Robin Lehner.

A day after coach Pete DeBoer said he expected Lehner to be at practice, the goaltender was not on the ice at City National Arena with only a 30-word news release from the team to explain why.

“I don’t have anything more to add to that statement,” DeBoer said. “Any questions on any of the guys who were at practice (Saturday) or the game (Sunday), I’m wide open.”

Lehner’s practice availability wouldn’t be such a topic of interest if not for reports Friday from ESPN and The Athletic that he was set to undergo season-ending surgery for a lower-body injury.

The Knights vehemently refuted those reports and continue to downplay the significance of Lehner’s absence from practice. DeBoer and general manager Kelly McCrimmon said Friday there is nothing physically to limit Lehner from playing.

Yet, that doesn’t explain why a supposedly healthy Lehner needed two consecutive maintenance days after the Knights also were off Thursday.

When asked if anything changed with Lehner’s status between Friday and Saturday to prevent him from practicing as the team had expected, DeBoer referred only to the organization’s statement as his answer.

DeBoer also was asked whether he trusted that Lehner could perform if called upon and said “the statement’s going to speak for everything on Robin today and we’ll go from there.”

The situation could come to a head Sunday when the Knights host San Jose at T-Mobile Arena.

In their statement, the Knights said they were “hopeful” Lehner will be available against the Sharks. That’s another shift from Friday when DeBoer flatly stated he expected Lehner to suit up for the home finale.

The distraction involving Lehner comes at an inopportune time as the Knights are trying to chase down a postseason berth. They trail Los Angeles by five points in the Pacific Division and are two points back of Dallas for the second wild card. Both teams played late Saturday.

Lehner was pulled from Wednesday’s 4-3 overtime victory over Washington after stopping 12 of 13 shots in the first period. He also allowed a pair of third-period goals in a costly loss to New Jersey on Monday, and DeBoer was critical of Lehner’s play afterward.

Lehner battled through injuries since the middle of December and has spent two stints on injured reserve after the All-Star break. Daily Faceoff previously reported Lehner is playing through a torn labrum in one of his shoulders that will require surgery.

The more recent issue occurred March 8 at Philadelphia when Lehner sustained a major knee injury in the 2-1 loss, according to ESPN. He was sent back to Las Vegas for further evaluation and placed on injured reserve.

The collective bargaining agreement grants teams the final say to determine the course of treatment for injuries. Lehner was not available to the media Saturday.

Since being activated by the Knights, Lehner has posted a 2-2-1 record with a 3.20 goals-against average and .892 save percentage in six appearances.

With Lehner’s status up in the air for the final four games of the regular season, Logan Thompson appears to be in line to start against San Jose. Last season’s American Hockey League goaltender of the year, Thompson has eight wins in his past 11 decisions and owns a 2.56 goals-against average and .920 save percentage.