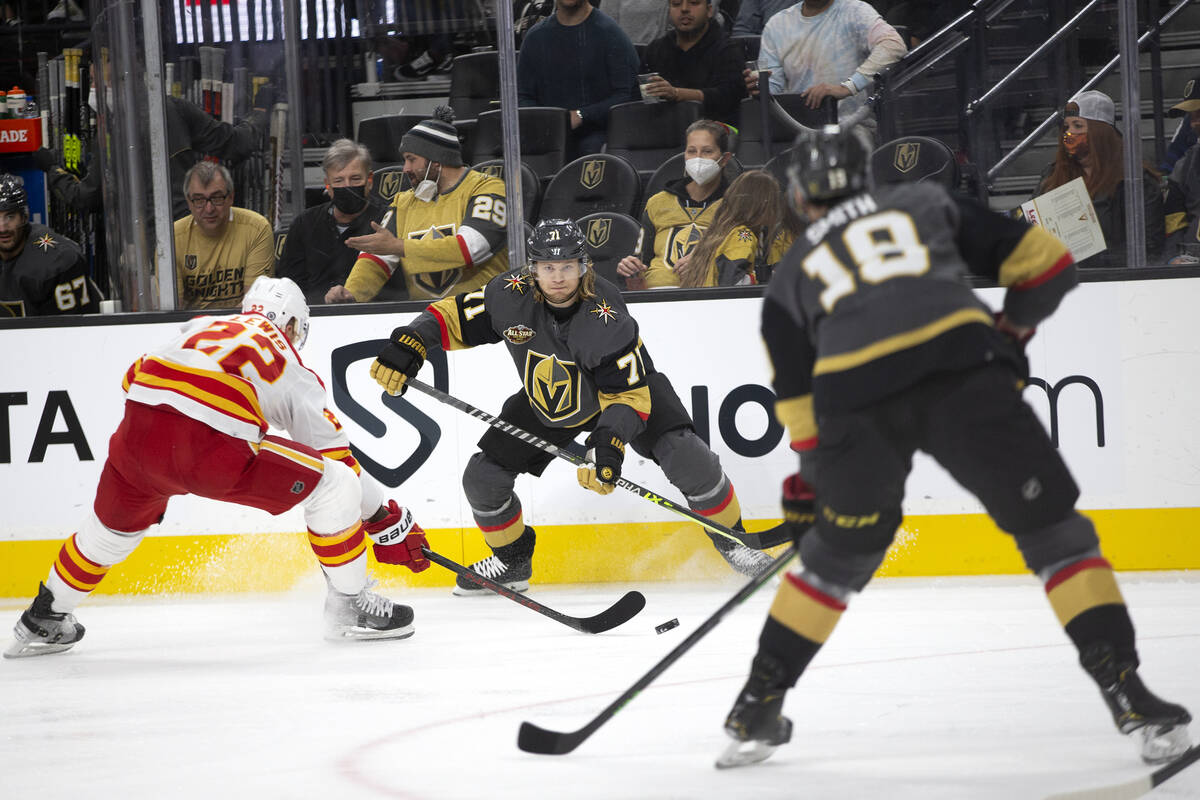 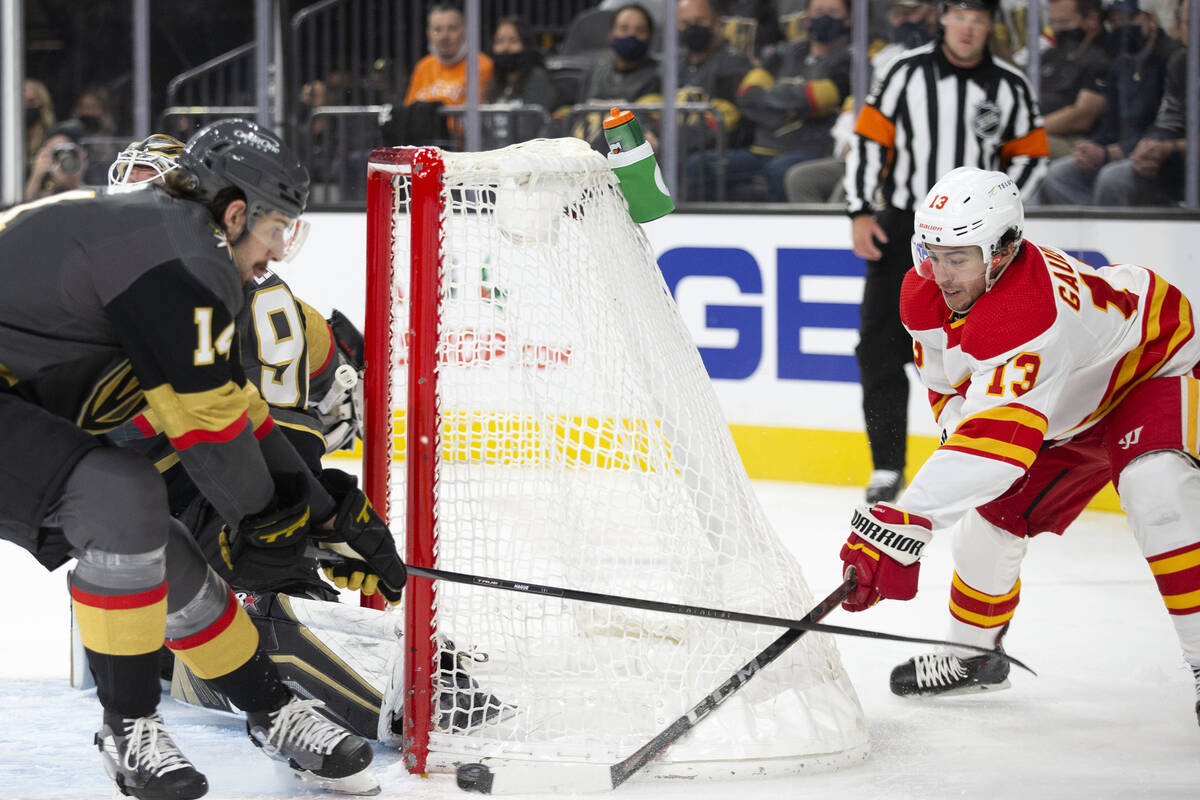 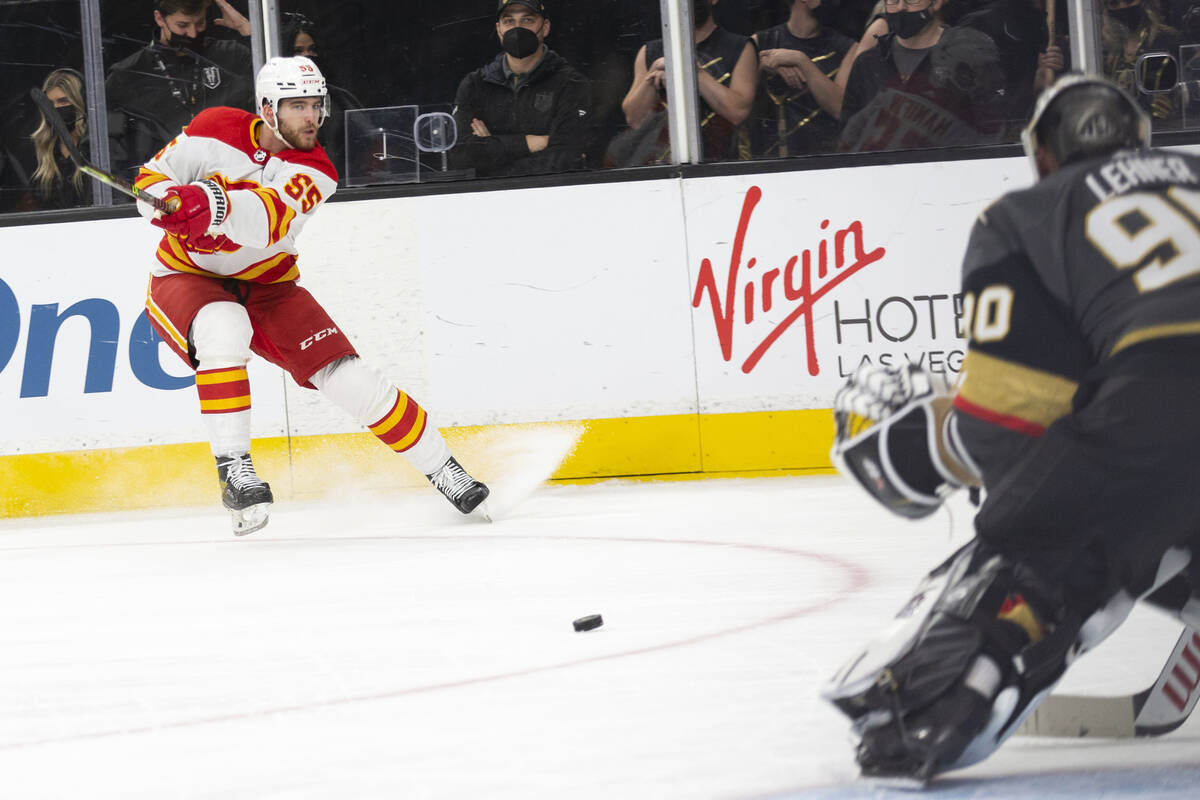 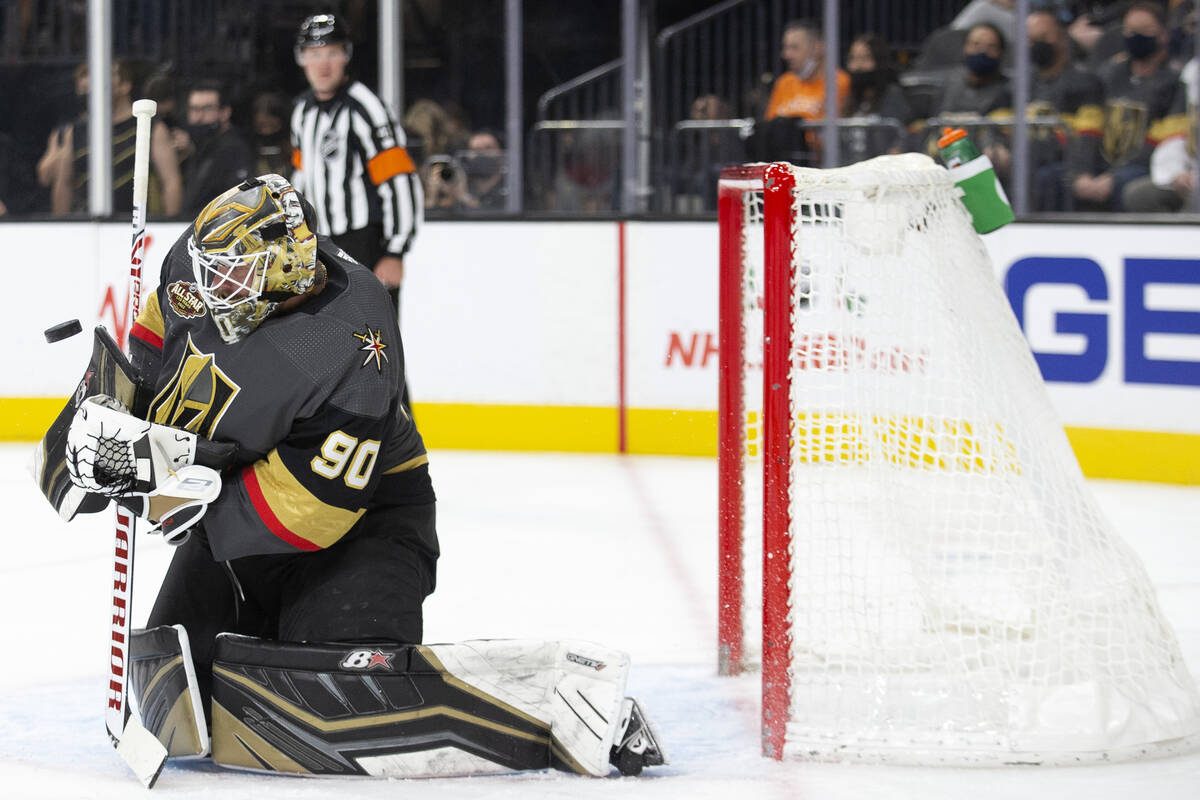 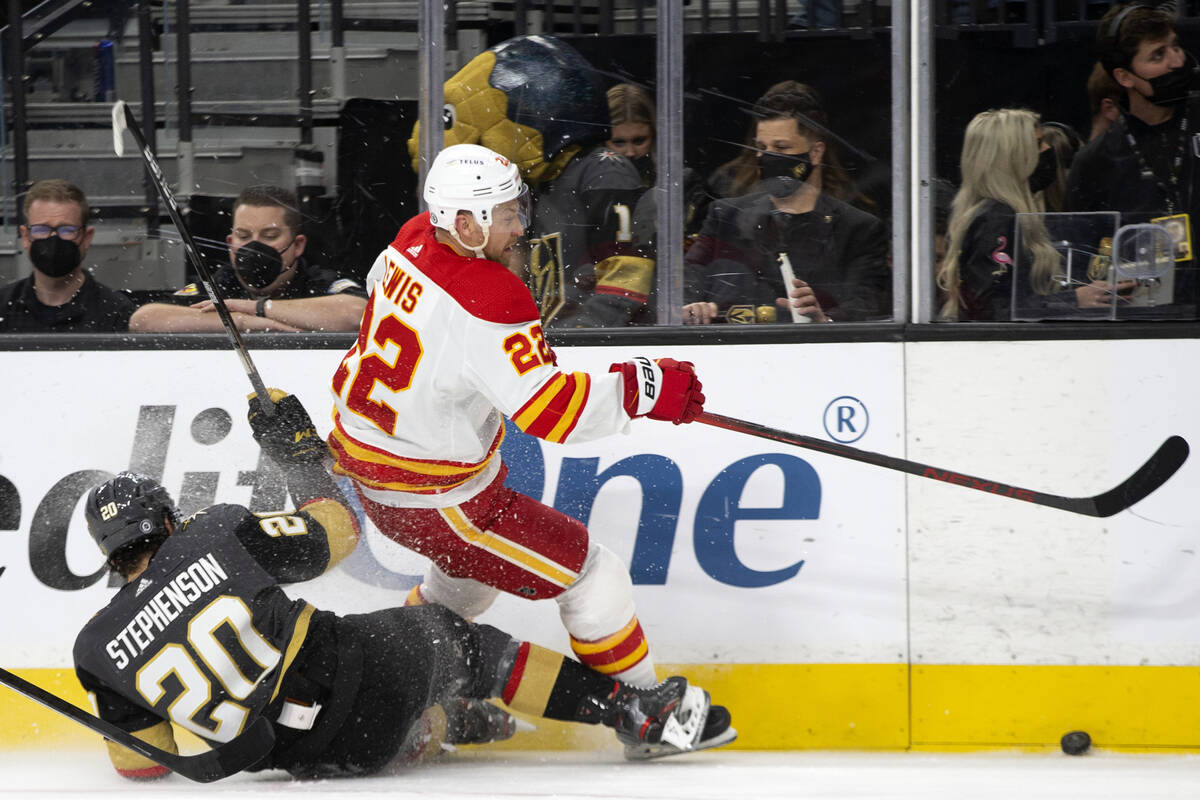 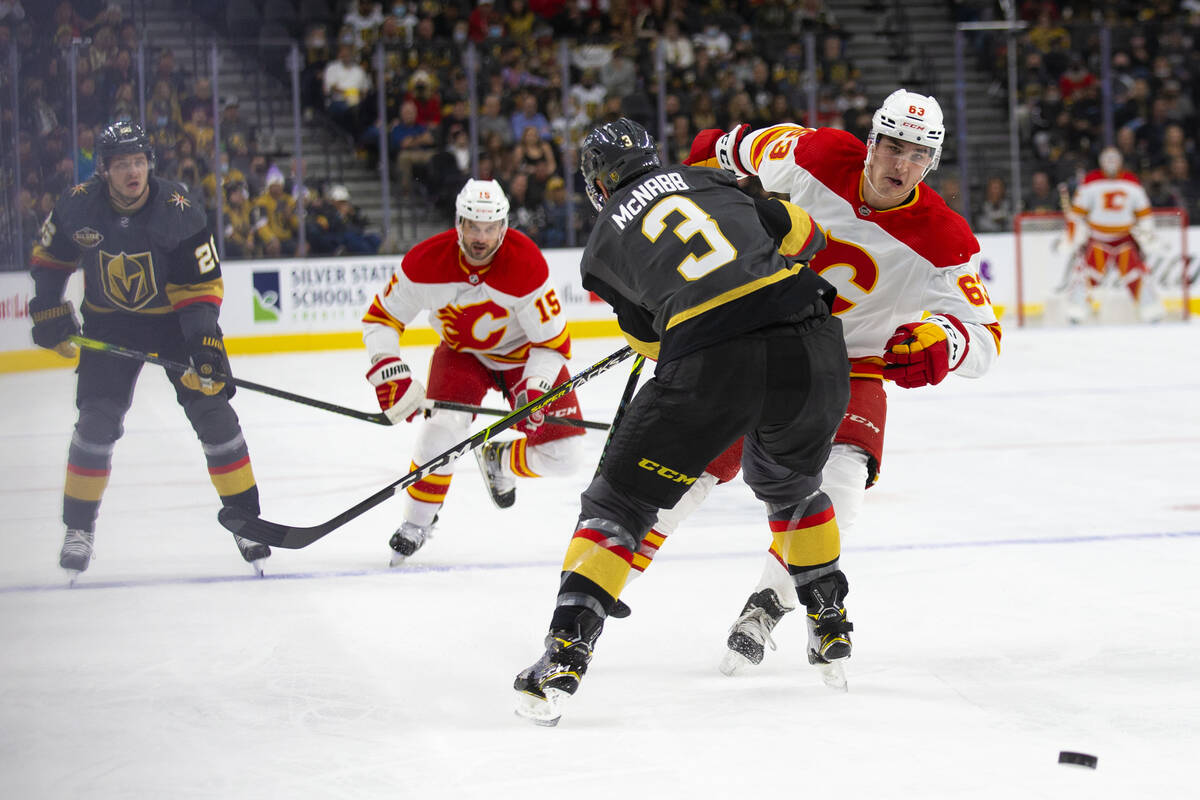 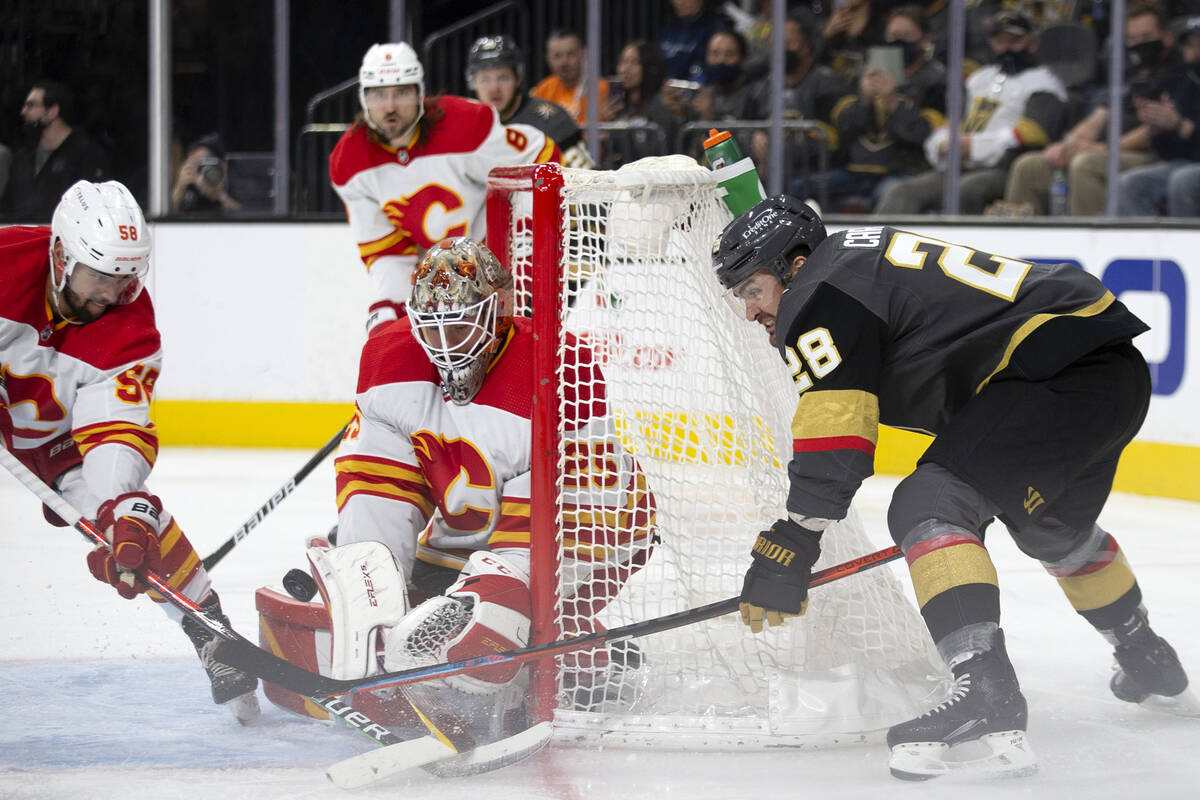 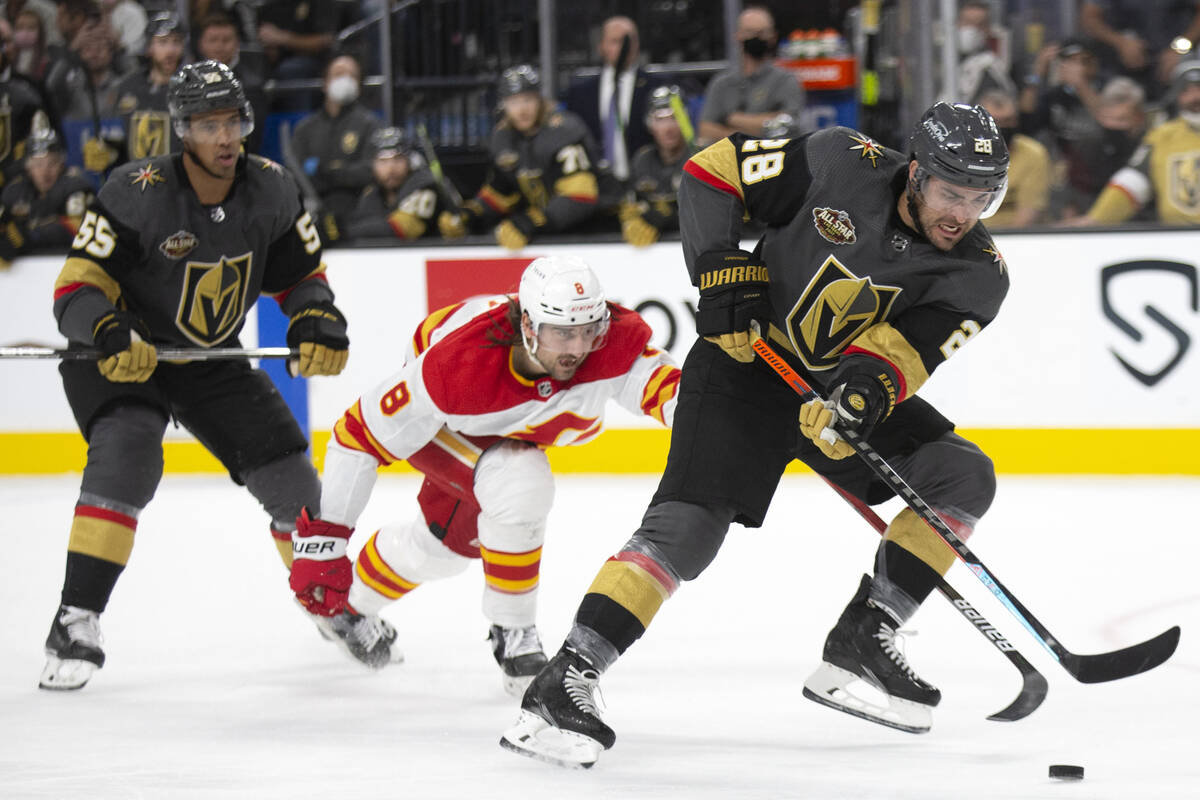 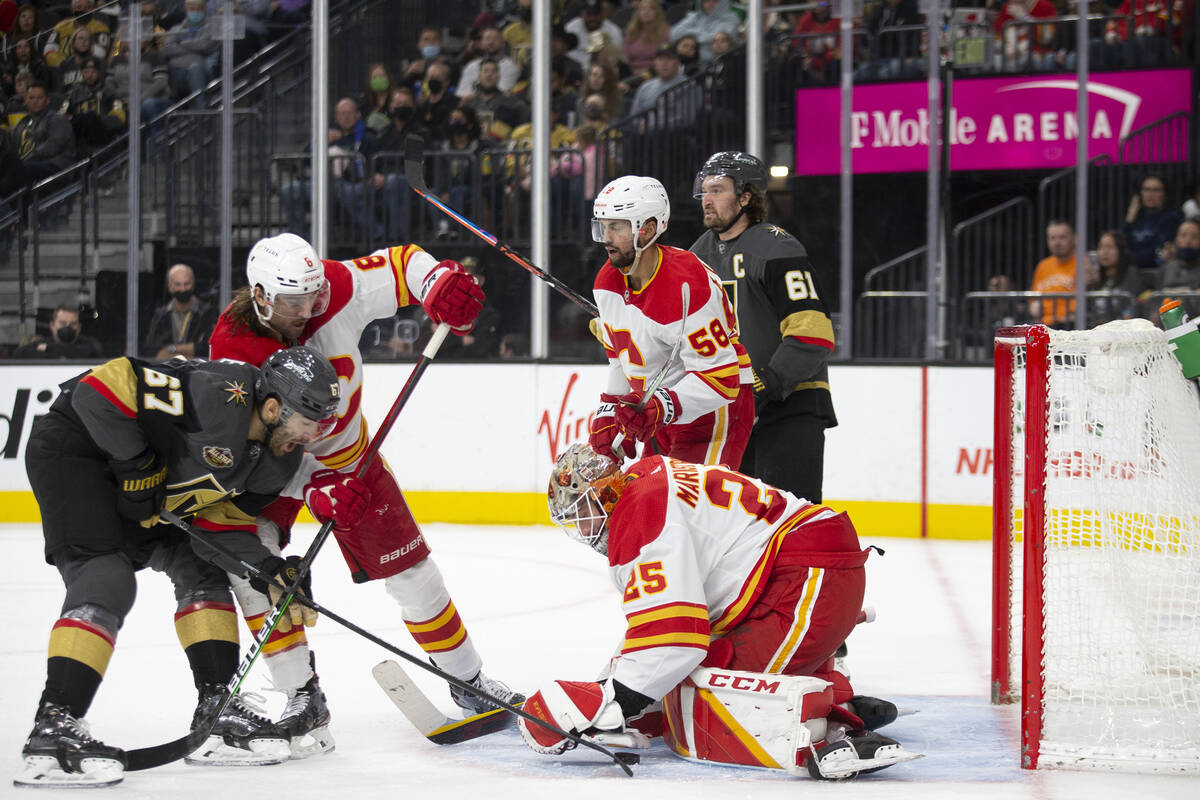 Of the Golden Knights’ nine victories since Nov. 4, three came against teams currently in a playoff position and only one of those could be considered a signature win.

But against the first-place Flames on Sunday, the Knights signaled they are ready to climb back in the Pacific Division race.

Bolstered by a strong defensive effort in front of goalie Robin Lehner, the Knights came away with a 3-2 victory over Calgary in front of an announced crowd of 18,077 at T-Mobile Arena.

“This was a huge game for us,” center Nicolas Roy said. “Coming in, we knew they had a good team that was first (in the division) for a reason and we had to play a whole 60 minutes.”

Roy scored early in the third and assisted on Evgenii Dadonov’s goal midway through the period that put the Knights ahead 3-1.

Max Pacioretty finished off a two-on-one rush with Chandler Stephenson in the first period to extend his point streak to five games and help the Knights win their second straight.

The Knights handed Calgary its first regulation road loss since Nov. 11 and moved within seven points of the division leaders in the Pacific Division. They improved to 7-0 all time against the Flames at T-Mobile Arena.

Robin Lehner flirted with a shutout before Elias Lindholm deflected a shot past the Knights goaltender at 9:19 of the third period. Andrew Mangiapane converted with 2:41 remaining for the Flames, but the Knights held on.

Center William Karlsson was activated from injured reserve and played his first game since breaking his foot Oct. 29 against the Anaheim Ducks.

Coach Pete DeBoer said he had to be careful managing Karlsson’s ice time, who missed the previous 15 games. In addition to his foot injury, Karlsson entered the NHL’s COVID-19 protocol on Nov. 29 but was cleared over the weekend.

Karlsson skated in his customary spot on the Misfit Line between wingers Jonathan Marchessault and Reilly Smith, logging 15:19 of ice time.

He created a chance off the rush for Smith during a first-period power play and nearly sprung Smith for a breakaway with a long diagonal pass through the neutral zone late in the second.

“I wasn’t sure how I would feel, but I felt pretty good,” Karlsson said. “Today was kind of a test and it felt good. That’s a positive sign.”

The Knights gave Calgary a taste of its own medicine, locking up the defensive zone through the first two periods.

Calgary, which was tied for third in the league averaging 3.4 goals per game on the road, finished with two high-danger chances at five-on-five and five overall.

The Flames entered with a five-game road winning streak and had points in eight straight on the road (6-0-2).

“I think the last two games have been very good,” said Lehner, who also announced he will not play for Team Sweden in the Olympics for health reasons. “We’re getting back to Vegas hockey.”

Since he returned Nov. 24 from a lower-body fracture, Pacioretty has been on a tear.

The goal extended his point streak to five games, and he has four goals and seven points during that stretch. The only game this season Pacioretty has been held without a point was Oct. 14 at Los Angeles when he was injured.

Overall, Pacioretty has six goals, which ranks tied for fourth on the team despite the fact that he’s only played seven games this season.