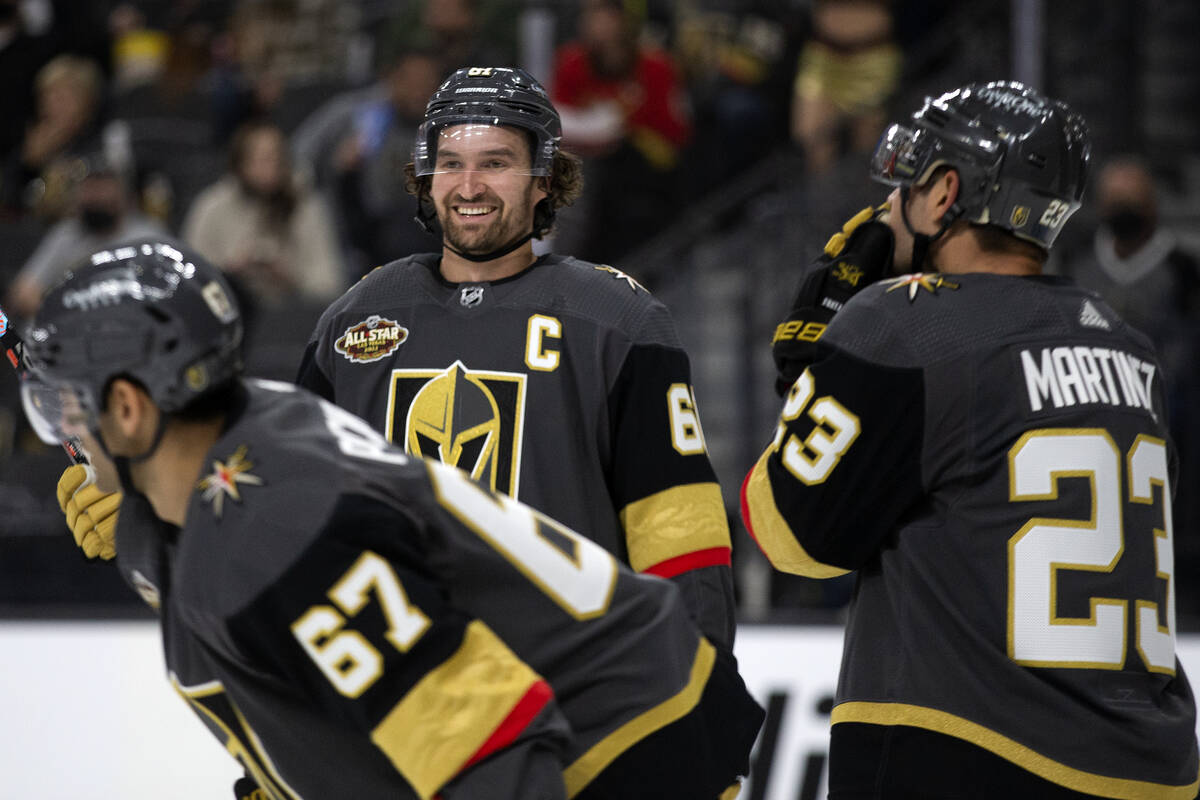 Golden Knights right wing Mark Stone (61) smiles in between the action next to left wing Max Pacioretty (67) and defenseman Alec Martinez (23) in the second period during an NHL hockey game against the Kraken on Tuesday, Oct. 12, 2021, at T-Mobile Arena, in Las Vegas. (Ellen Schmidt/Las Vegas Review-Journal) @ellenschmidttt

The first half of the Golden Knights’ season ended in all too fitting fashion.

Captain Mark Stone was declared out before Thursday’s game because of COVID-19 protocol. Defenseman Zach Whitecloud was a late scratch after warmups because of an upper-body injury.

Injuries and absences have led to a staggering lack of consistency that has kept a preseason Stanley Cup favorite from taking off. The Knights, 41 games into their season, are 13th in the NHL in points percentage. But they remain atop the Pacific Division standings and are still in position to accomplish their goals in the second half.

“I don’t think we’ve played once yet with the full roster,” left wing William Carrier said. “But everyone’s dealing with that kind of issue. It’s going to be the same for the rest of the year. I like where our game’s at overall. A lot of guys have been stepping up when guys go out with injuries or COVID. We like where we are, but we still have a lot of work to do before the playoffs.”

Carrier is right. The forward lines and defense pairings the Knights started training camp with haven’t been used once this season. There always has been someone out of the lineup because of an injury, COVID-19 protocol or another reason.

The team has long surpassed last season’s total of 121 man-games lost. It should easily double it at 202 and counting. Key players have been the ones missing time, too.

Stone (one), Pacioretty (eight) and Martinez (three) combined to miss 12 games last season when the team finished tied for the most points in the NHL.

“For any good team, you have to face adversity at some point during the season,” right wing Keegan Kolesar said. “We’ve found ways to win, so we know we have the ability to win games, even when we’re down. Over the course of the season, as we start getting guys back, we’re ready to go.”

The Knights’ depth and coaching have kept them afloat. They’re sixth in the NHL in goals per game (3.46) despite never having their full arsenal.

The first half has still produced questions, however.

The Knights have gone from first in goals allowed per game in 2021 to 19th this season. Their penalty kill has slipped from first to a tie for 22nd.

The team’s defensive-zone coverage hasn’t always been tight with Martinez, Whitecloud and defenseman Nic Hague missing time. The Knights also could use a few more saves.

Marc-Andre Fleury won the Vezina Trophy last season and combined with Robin Lehner to win the Jennings Trophy for fewest goals allowed. The Knights broke up the tandem in the offseason by trading Fleury to better allocate salary cap space across their roster.

It has led to a notable decline in production in net. The Knights went from having the second-best team save percentage in the NHL last season (.920) to the 23rd-best this season (.898).

“Our goaltending was exceptional early in the season when we needed it to be,” coach Pete DeBoer said. “We were outplayed a lot of nights. The ice was tilted a lot of nights. As we’ve gotten healthier, our game has tightened up a little bit. Everybody’s got to be better. The bar for everybody in the second half is higher.”

Lehner and backup Laurent Brossoit rebounding in the second half would go a long way toward the Knights finishing the season better than they started. So would getting some of their best players back in the lineup.

It hasn’t been an ideal start, but it’s still one the team is pleased with.

“Overall, it’s been a good first half,” center William Karlsson said. “Credit to the guys who had to play when everyone was injured and taking us to a good spot, to where we’re at today.”