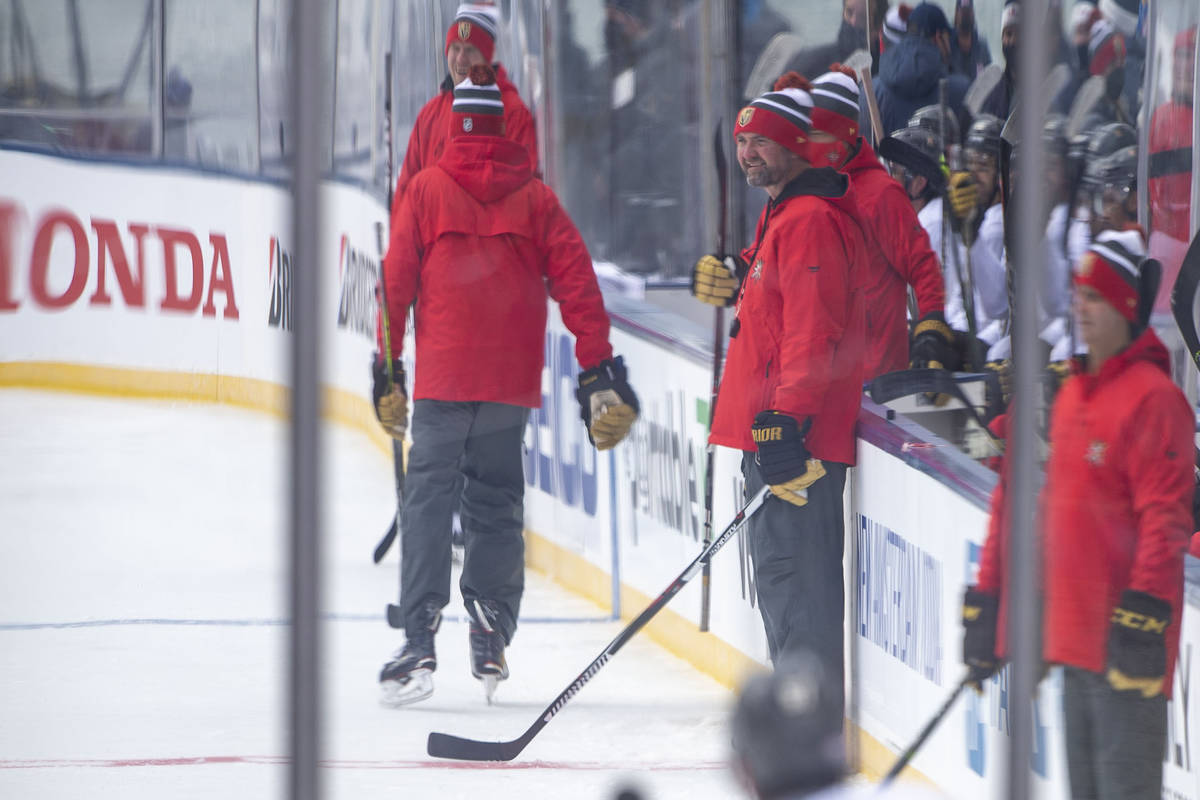 The Golden Knights were required to improvise during NHL Outdoors at Lake Tahoe after Saturday’s game against Colorado had an eight-hour delay.

The Knights flew to Colorado on Sunday morning and had plenty of time to recover from the events of the weekend ahead of Monday’s game against the Avalanche at Ball Arena in Denver.

“Our plan all along was to stay in Tahoe after the game and not race out of there,” coach Pete DeBoer said.

The game on the 18th fairway of Edgewood Tahoe Resort’s golf course started at 12:13 p.m. and was suspended after the first period due to poor ice conditions caused by the sun despite temperatures in the low 30s.

The temporary locker rooms at the rink were not equipped with showers, and the teams planned to return to their hotels following the game regardless of the delay.

It is about an hour drive from Stateline to the Reno airport, and the Denver airport is located almost 45 minutes outside of downtown. Rather than arrive there late Saturday or early Sunday with the time difference, the Knights took off Sunday and rested.

“We had made a decision prior to any of the delays that we were going to stay over anyway, so really it didn’t change our day (Sunday) at all,” DeBoer said. “We got up, we flew in here and are here ready to play.”

Forward Tomas Nosek remained on the NHL’s COVID protocol-related absences list Monday and is progressing toward a return, according to DeBoer.

“The reports I’ve been getting is he’s skated multiple days in a row,” DeBoer said. “But I don’t have a return date.”

Nosek was pulled from the Feb. 9 game against Anaheim during the second intermission. The league announced the following day he tested positive for COVID-19.

The NHL’s protocols for a positive test state that a player can be permitted by the team physician to start “low grade exercise” after isolating for the required 10 days. Nosek, who announced Saturday on Instagram his wife gave birth to their second son, must be cleared by a cardiologist and team physician before he can return to playing games.

Goalie Robin Lehner (upper body) also did not make the trip to Colorado. He has not practiced with the team since the morning skate on Feb. 9.

DeBoer said last week Lehner had been skating on his own but did not have a timetable for his return.

The letterman-style jackets with leather sleeves worn by the Knights coaches during the outdoor game Saturday at Lake Tahoe were a big hit.

“They were sweet,” defenseman Zach Whitecloud said. “When we first saw them, you kind of like had to look back at it twice.”

Whitecloud recalled having a similar jacket when he was a teenager playing minor hockey in Brandon, Manitoba. He said it’s still in his closet at his parents’ home.

“Those are one of those things that you’re going to keep forever. No matter where you go or what you’re doing, you can wear that and look pretty sweet,” Whitecloud said.