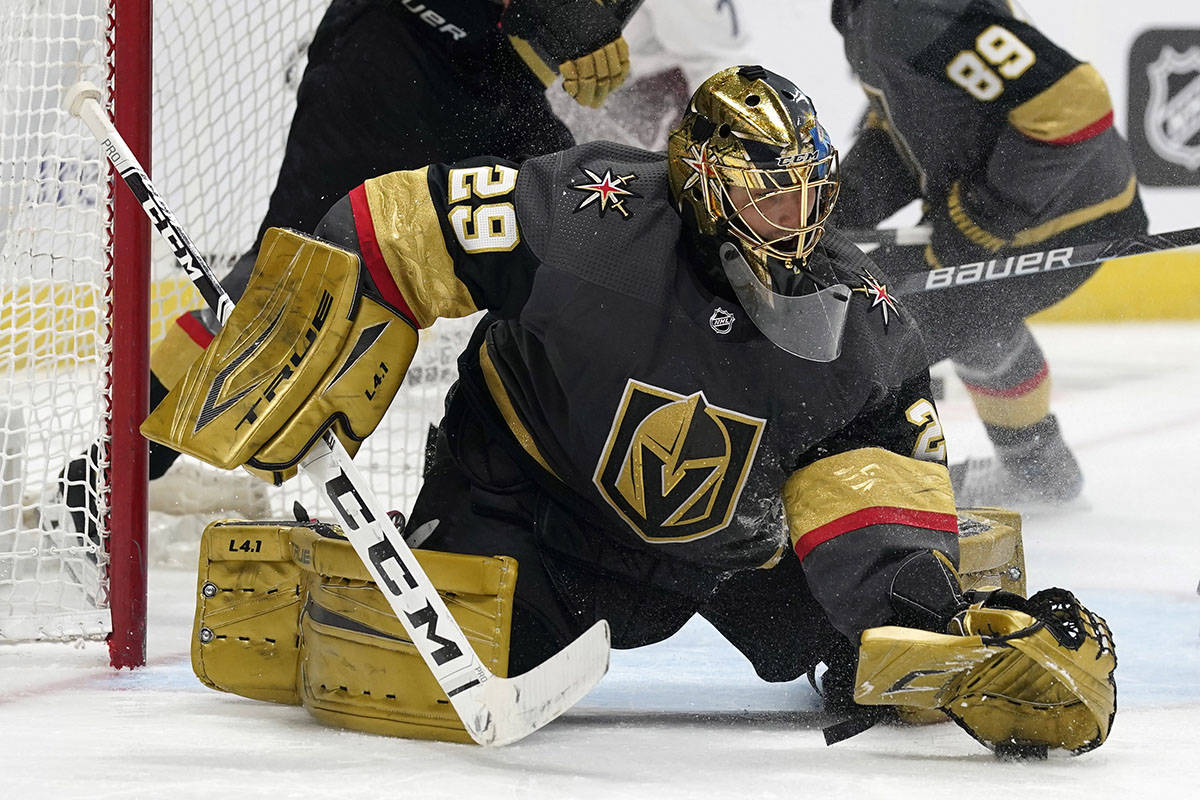 Vegas Golden Knights goaltender Marc-Andre Fleury makes a glove save of a shot against the Colorado Avalanche in the third period of an NHL hockey game Monday, Feb. 22, 2021, in Denver. (AP Photo/David Zalubowski) 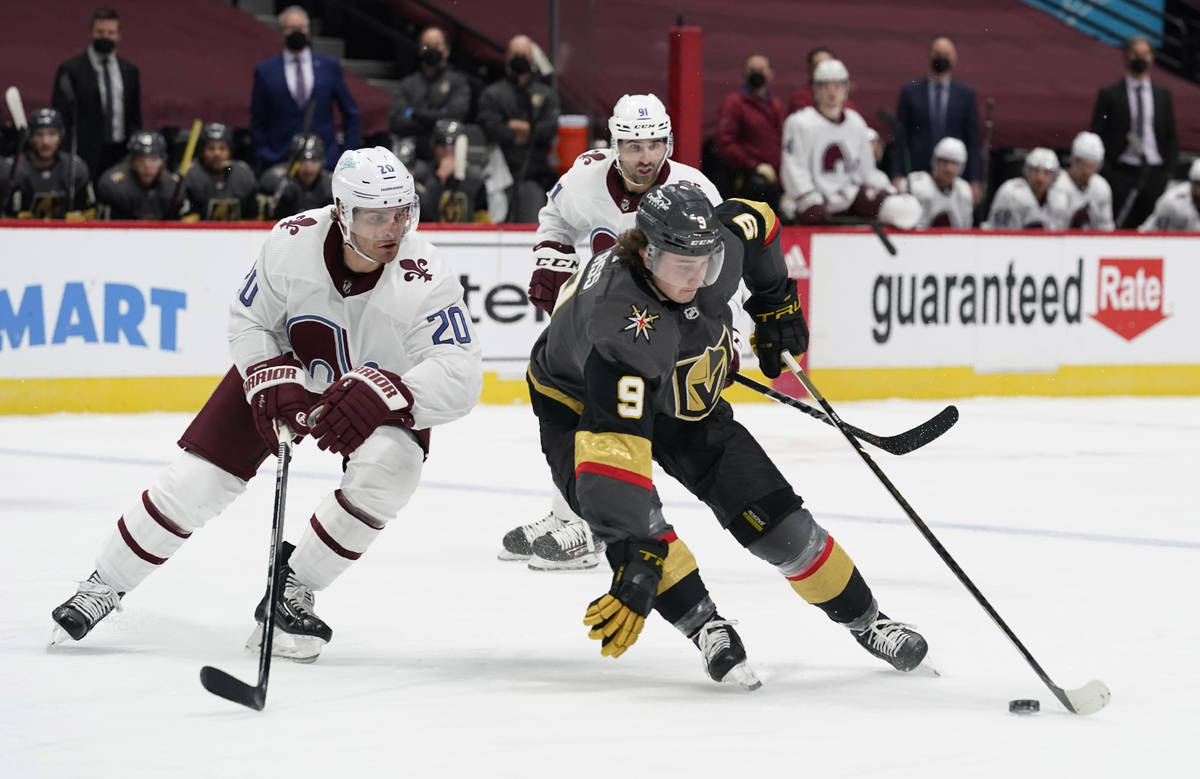 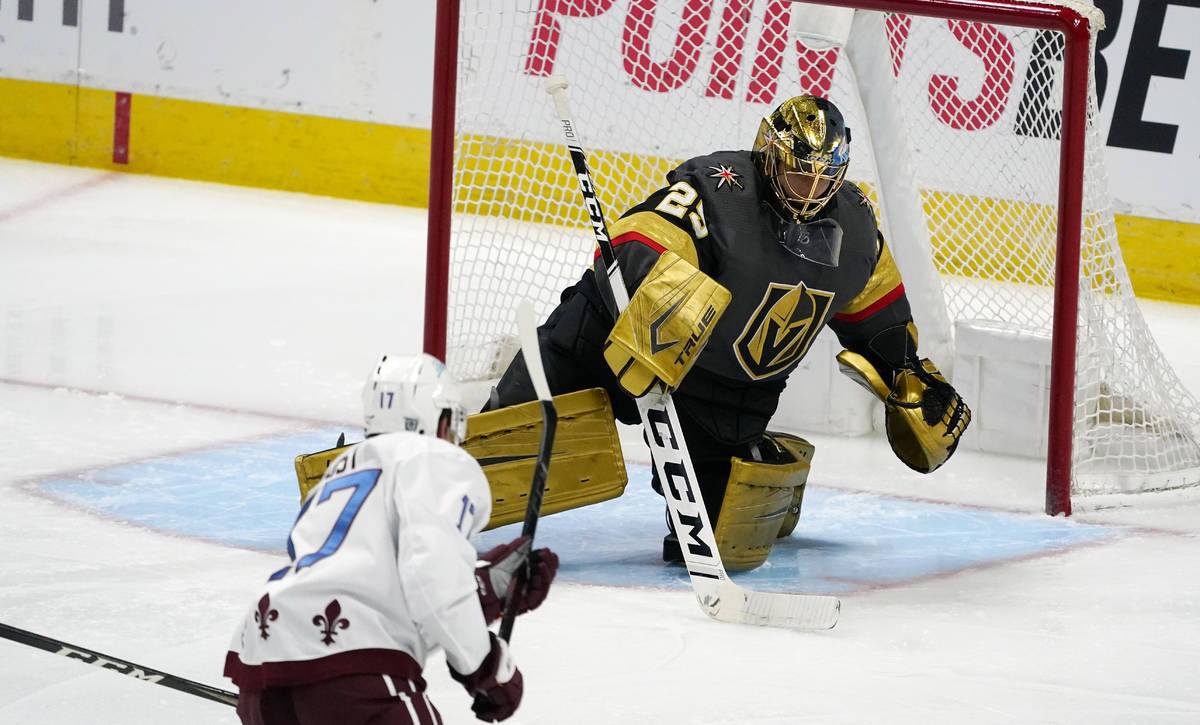 Vegas Golden Knights goaltender Marc-Andre Fleury, back, makes a stick save of a shot by Colorado Avalanche center Tyson Jost in the first period of an NHL hockey game Monday, Feb. 22, 2021, in Denver. (AP Photo/David Zalubowski) 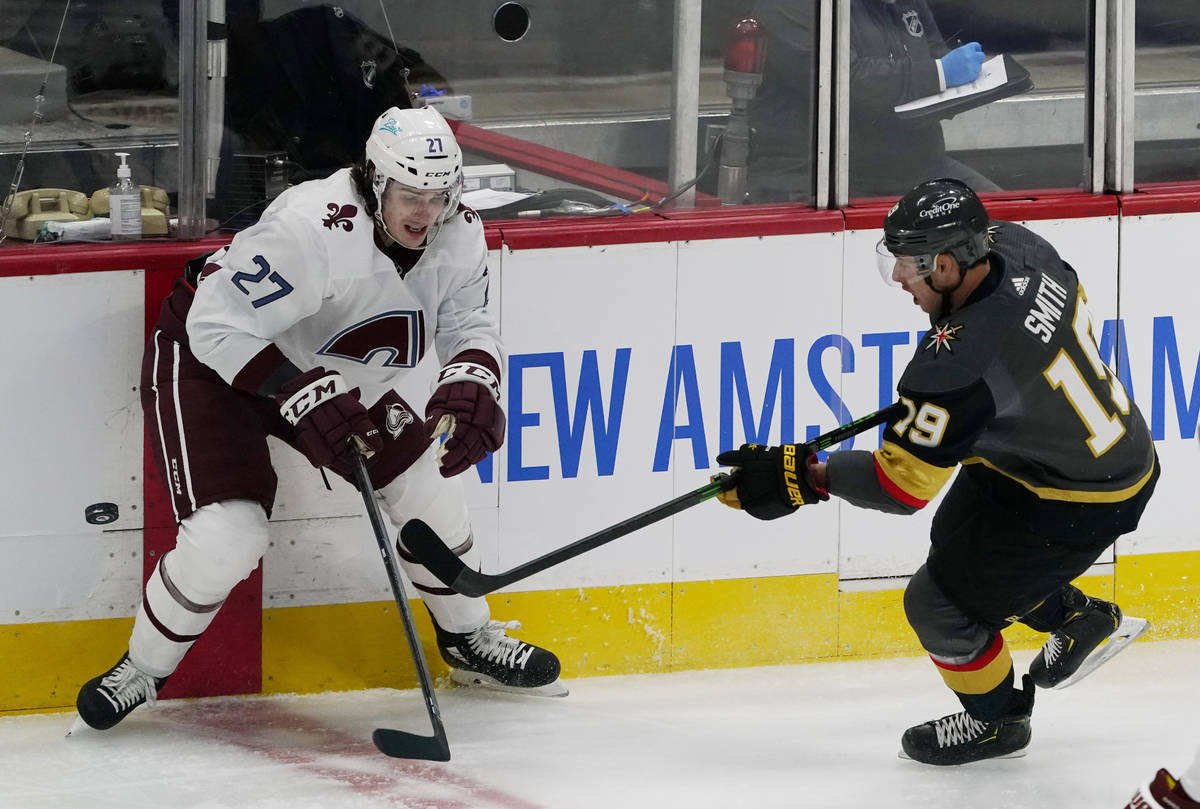 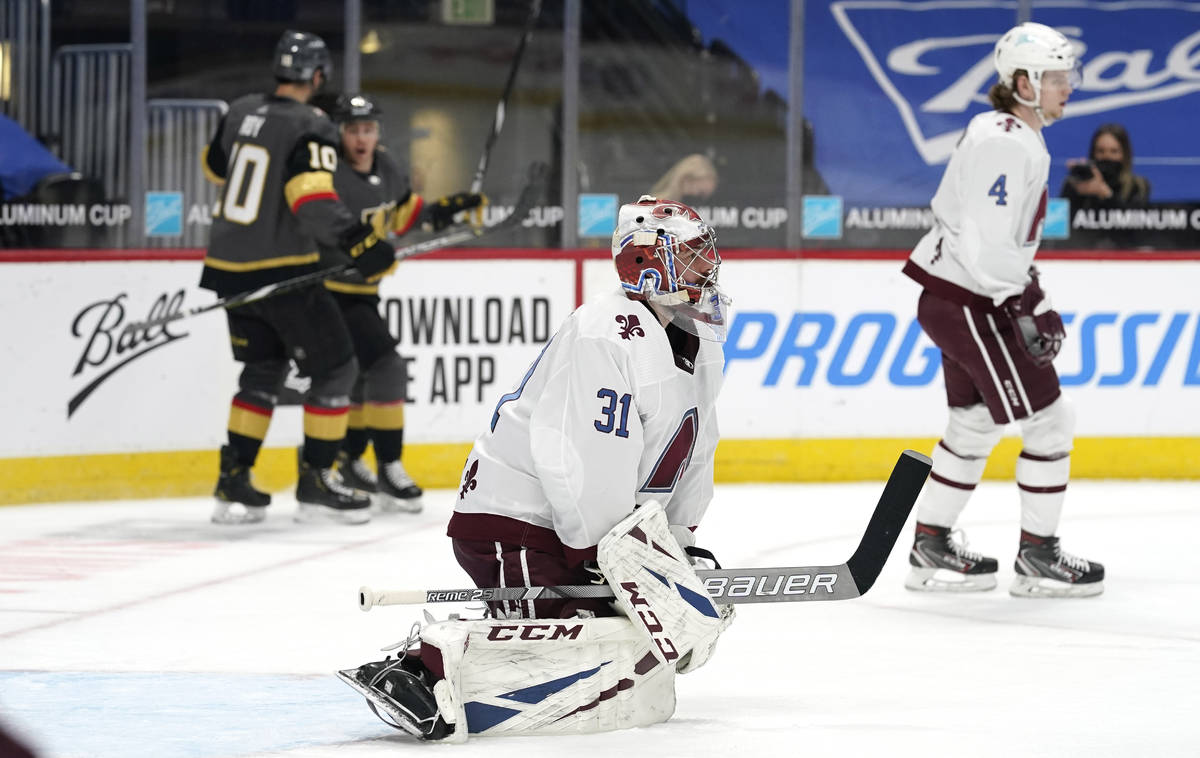 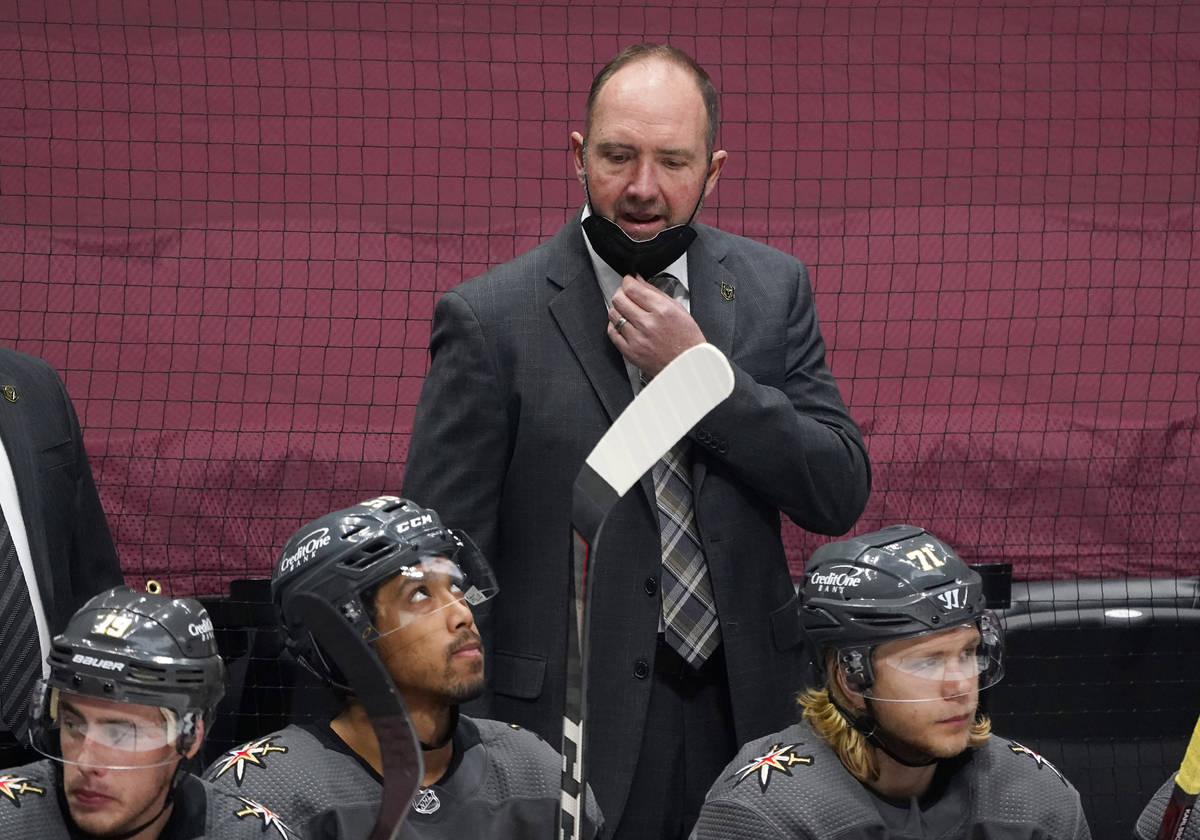 Vegas Golden Knights head coach Peter DeBoer, back, pulls down his mask to talk to his players in the second period of an NHL hockey game against the Colorado Avalanche, Monday, Feb. 22, 2021, in Denver. (AP Photo/David Zalubowski) 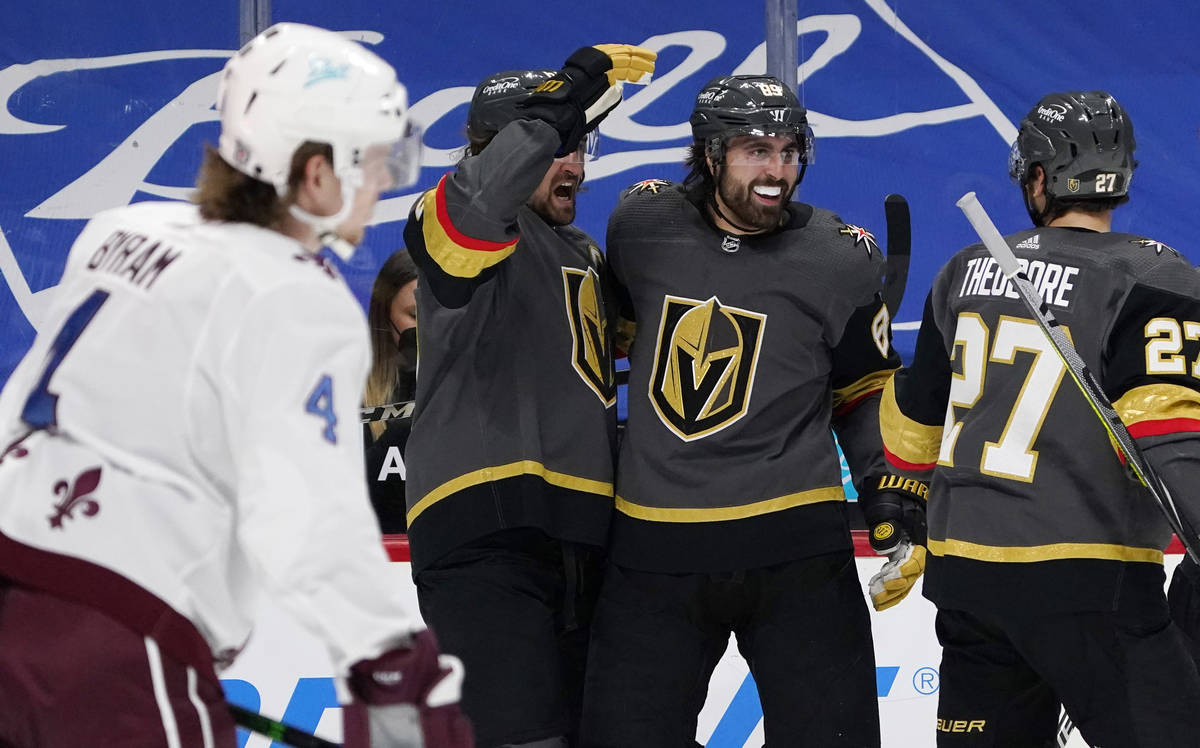 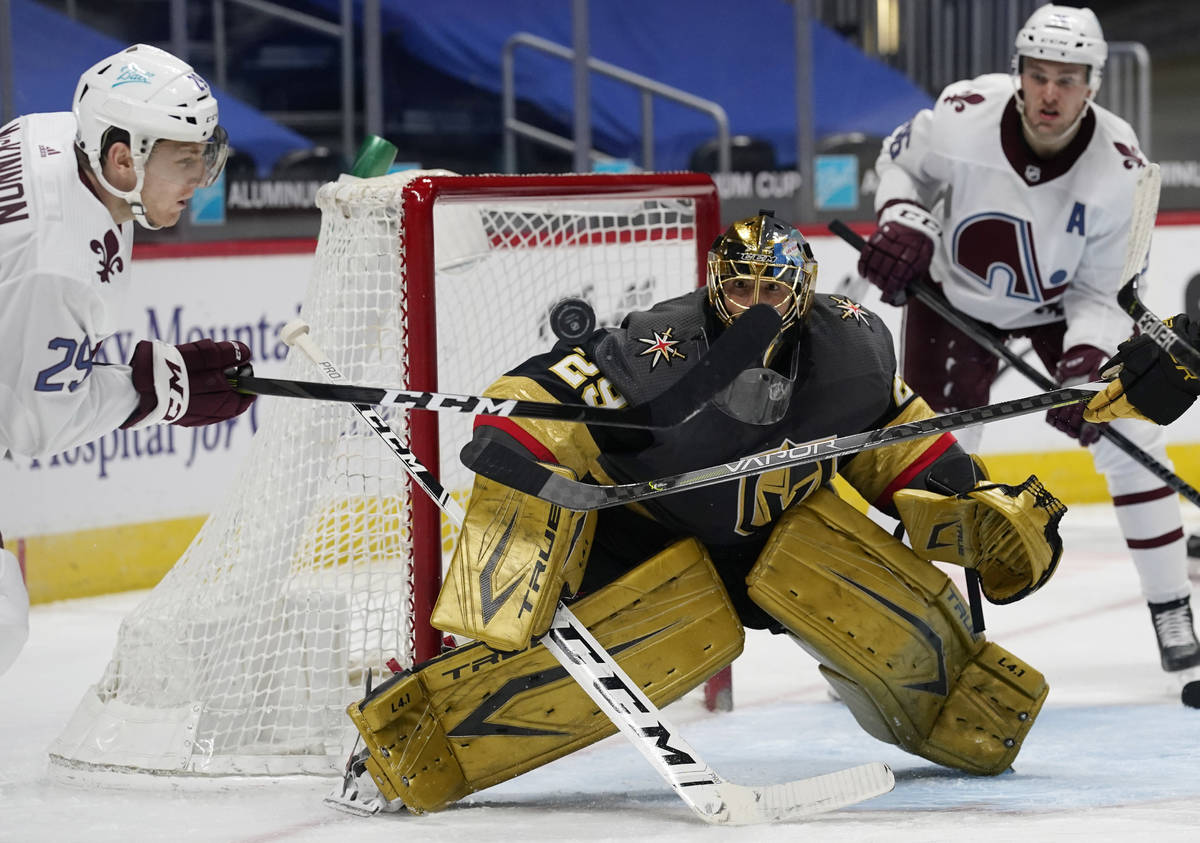 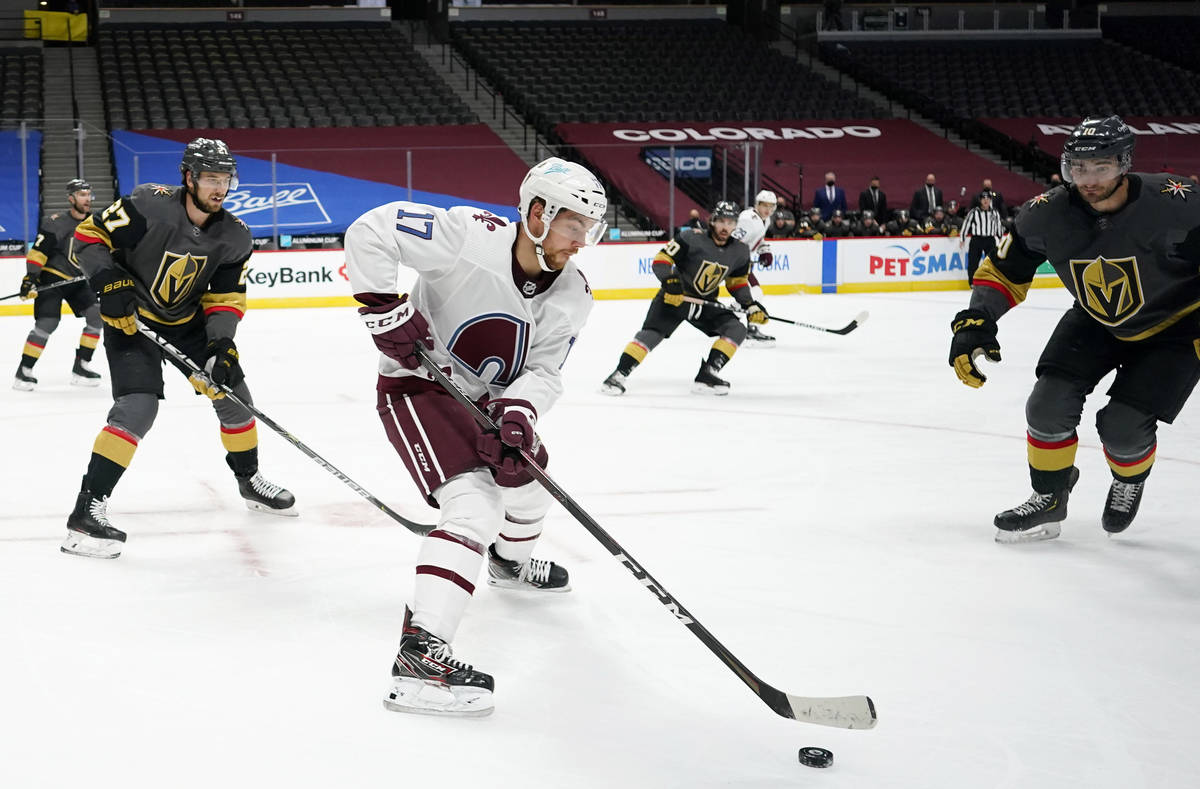 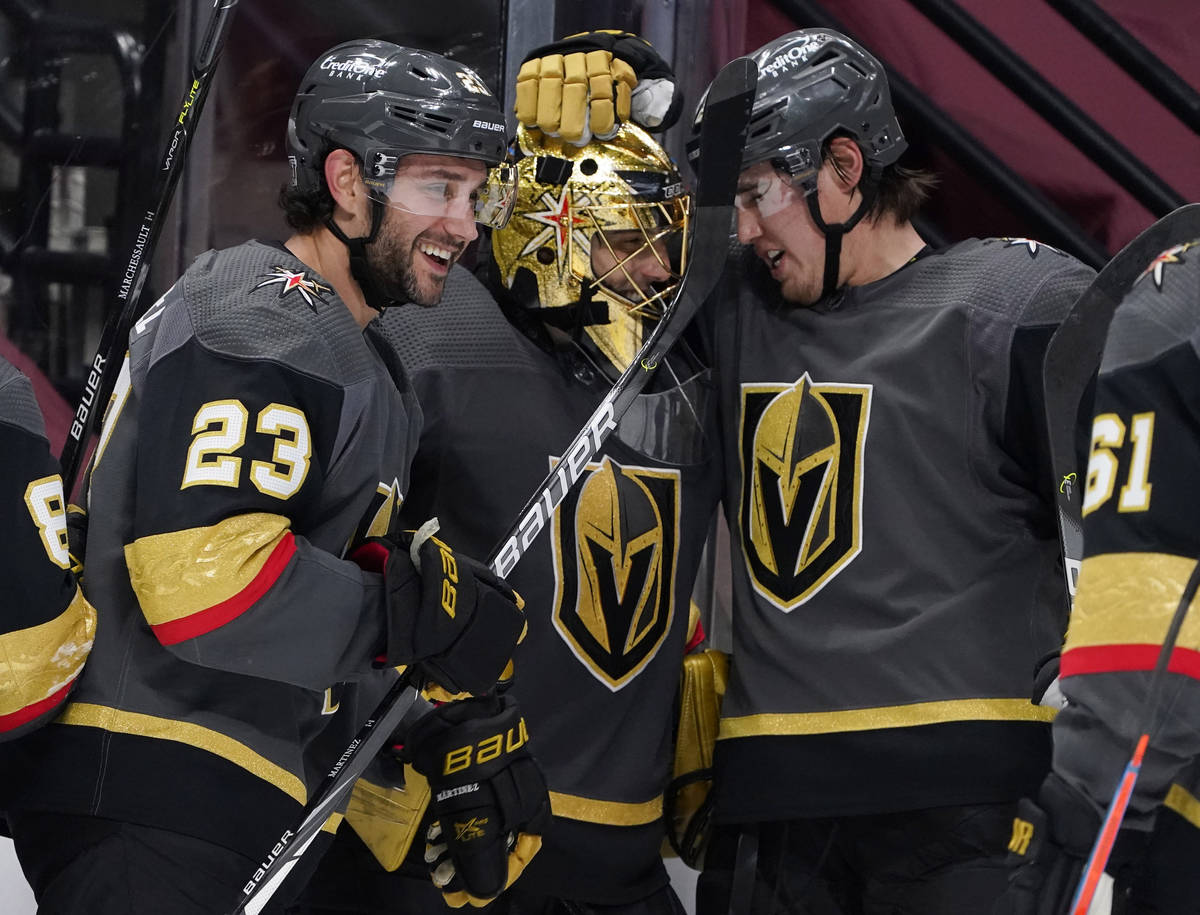 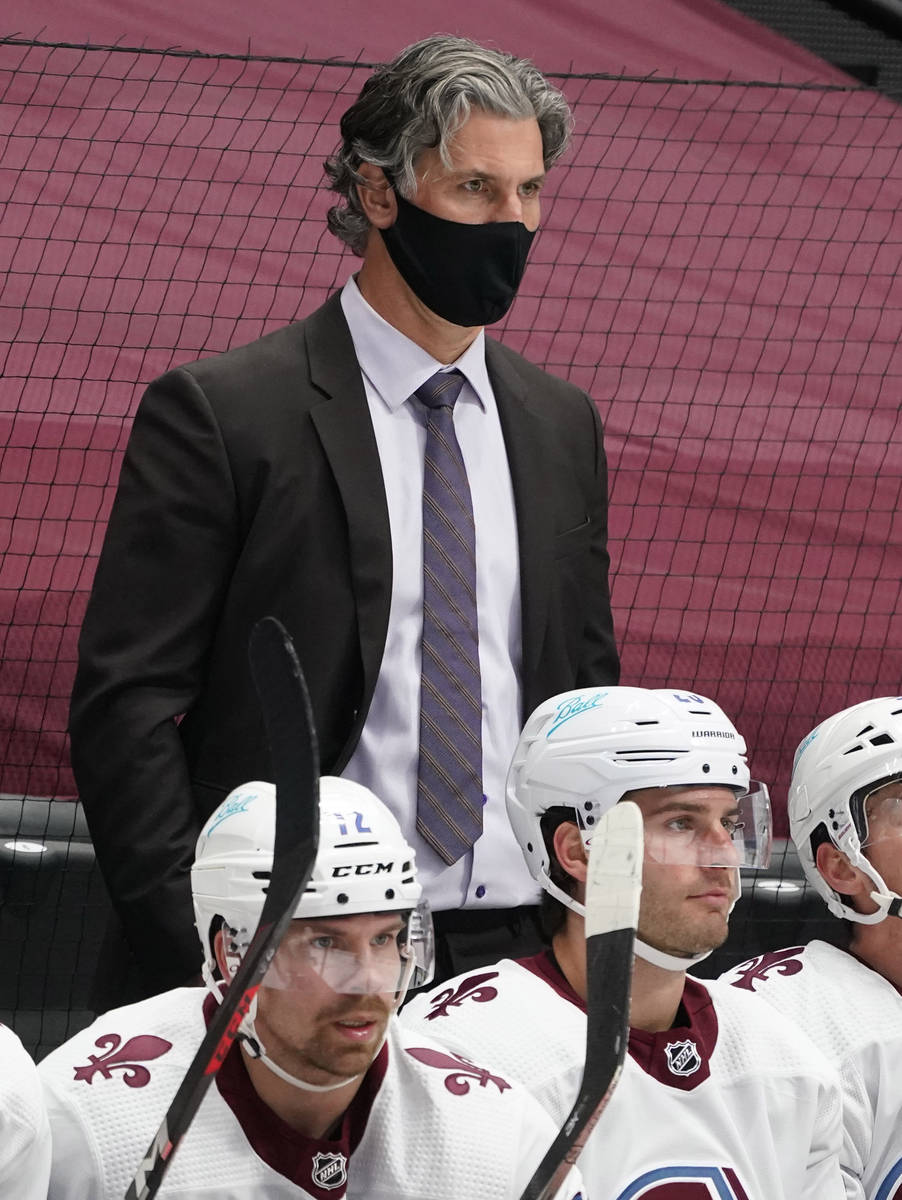 Colorado Avalanche head coach Jared Bednar, back, looks on in the third period of an NHL hockey game against the Vegas Golden Knights Monday, Feb. 22, 2021, in Denver. (AP Photo/David Zalubowski)

The Golden Knights played their most important game of the season to date Monday against the Colorado Avalanche.

Naturally, coach Pete DeBoer felt it was the perfect time to throw a few things at the wall. The Knights had new line combinations and defense pairs in their 3-0 win in Denver. They changed things up despite not having a practice between games to test things out, and it’s not like they went back to groups that had worked in the past.

The Knights’ top three lines Monday had previously spent a little more than three minutes of total playing time together — 3:18 to be exact. But they figured things out on the fly, and earned a crucial win.

“It was definitely a little bit of a surprise,” said left wing Jonathan Marchessault, who was moved to the third line with center William Karlsson and right wing Nicolas Roy. “But at the same time, we weren’t scoring five-on-five goals. We weren’t scoring enough. For our group of forwards, we know we have to be better offensively.”

The Knights entered Monday with four five-on-five goals in the past five games. The lack of offense prompted DeBoer to break up his top six for the first time all season.

The changes created a top nine that didn’t have a lot of history but was balanced. That was reflected in how DeBoer deployed his new groupings.

The Knights’ second line averaged almost a minute more of five-on-five time per game than the third line did in the first 15 games. Pacioretty and Glass only averaged 10 more seconds of five-on-five time than Karlsson, Marchessault and Roy on Monday. The fourth line of left wing William Carrier, rookie center Keegan Kolesar and right wing Ryan Reaves received a smaller share of ice time to make up the difference.

The shakeup ultimately led to the Knights’ most impressive win of the season. They scored two five-on-five goals, snapping a two-game skid, which let them stay atop the West Division in points percentage.

“We just were looking for a spark,” DeBoer said. “I loved our response.”

Tuch had the fourth two-goal game of his career Monday after being moved to the Knights’ top line. But the elevated role also meant elevated responsibility.

Instead of getting easier matchups on the third line, Tuch spent about 40 percent of his five-on-five time on the ice against Colorado star Nathan MacKinnon. He admitted playing against last year’s runner-up for the Hart Trophy posed challenges.

DeBoer was impressed with his defensive work. Tuch is one of the rare players who has speed to match MacKinnon, and he used it to provide back pressure on the Avalanche center on several occasions.

“I liked him as much defensively tonight as I did offensively,” DeBoer said.

Goaltender Marc-Andre Fleury may finally have a shot at being a Vezina Trophy finalist this season.

Fleury, by any measure, has been one of the most impressive goalies in the NHL. He’s tied for the league lead in shutouts with three. He’s second in save percentage (.942) and goals-against average (1.55) among goalies with at least one start. He’s first in goals saved above average in all situations (10.36), according to the website NaturalStatTrick.

Fleury has long been known for his consistency and longevity. But lately he’s been flat-out dominant.

“It’s as good as I’ve seen him play,” DeBoer said. “He’s been dialed in right since training camp for us and really has consistently been our best player.”

The Knights were feeling pretty good after the win.

The proof came in their postgame Zoom call with the media when Marchessault sat down with defenseman Shea Theodore and promptly welcomed everyone to the “gun show.”

Marchessault and Theodore later launched into an impromptu comedy routine when the former was asked who was providing the “guns.”

Catch Theo and Marchy coming soon to a comedy club near you 😂 pic.twitter.com/KT0hT8SPX8

Marchessault mocked Theodore by saying “This guy has a skinny upper body” before backing off. But only a little.

“It’s not true,” Marchessault said. “Well, you don’t need to be strong. You’re a smooth skater.”