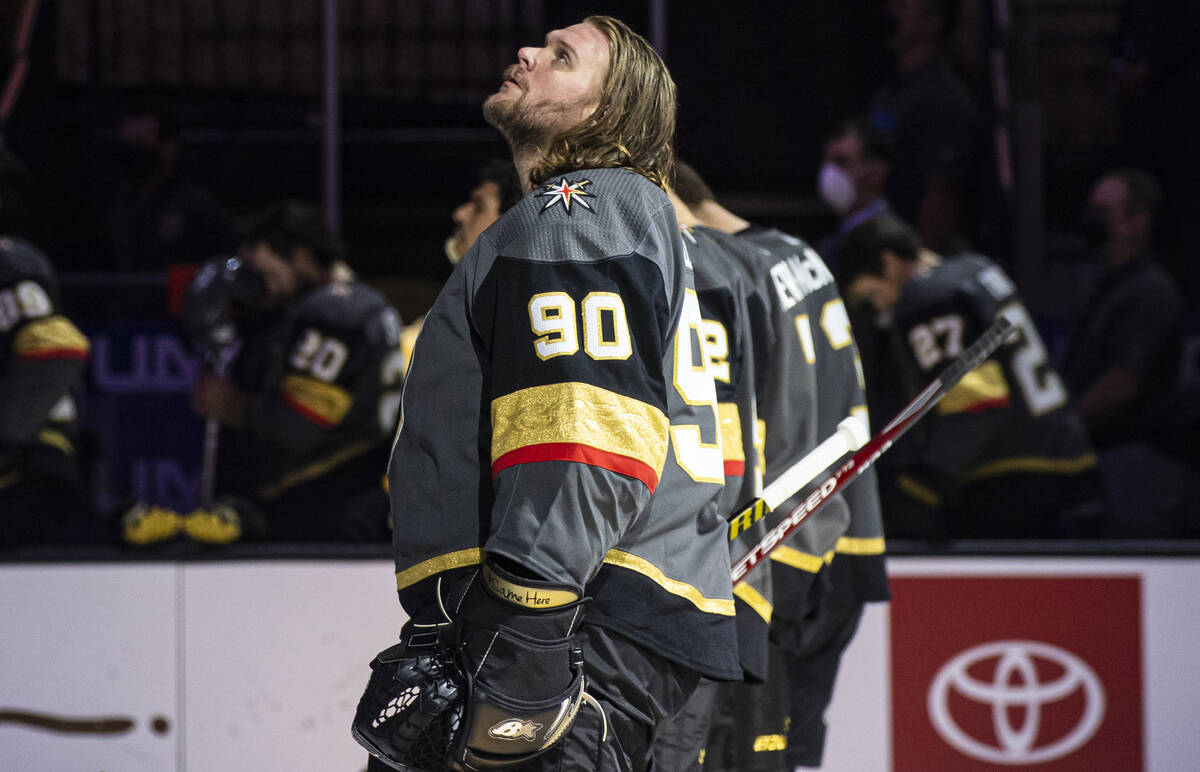 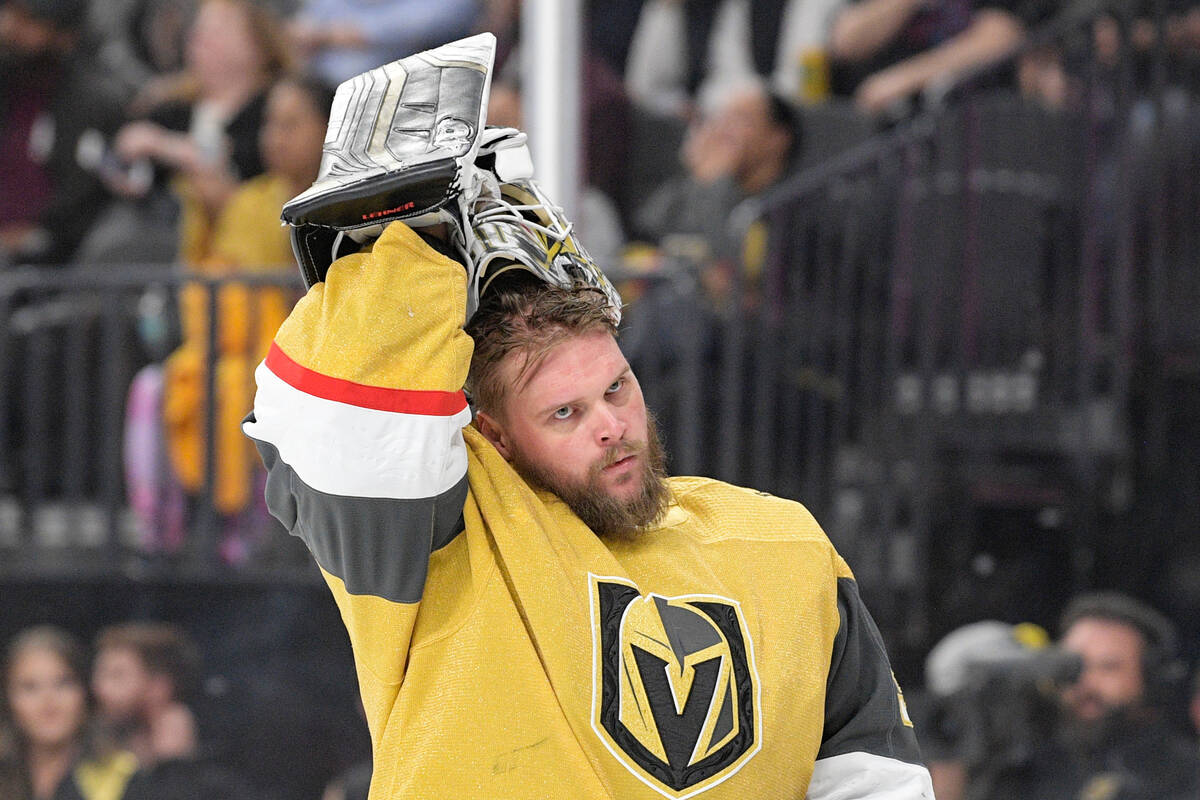 Golden Knights goaltender Robin Lehner puts his helmet on before the team's NHL game against the Washington Capitals on April 20, 2022, in Las Vegas.(AP Photo/Sam Morris, File) 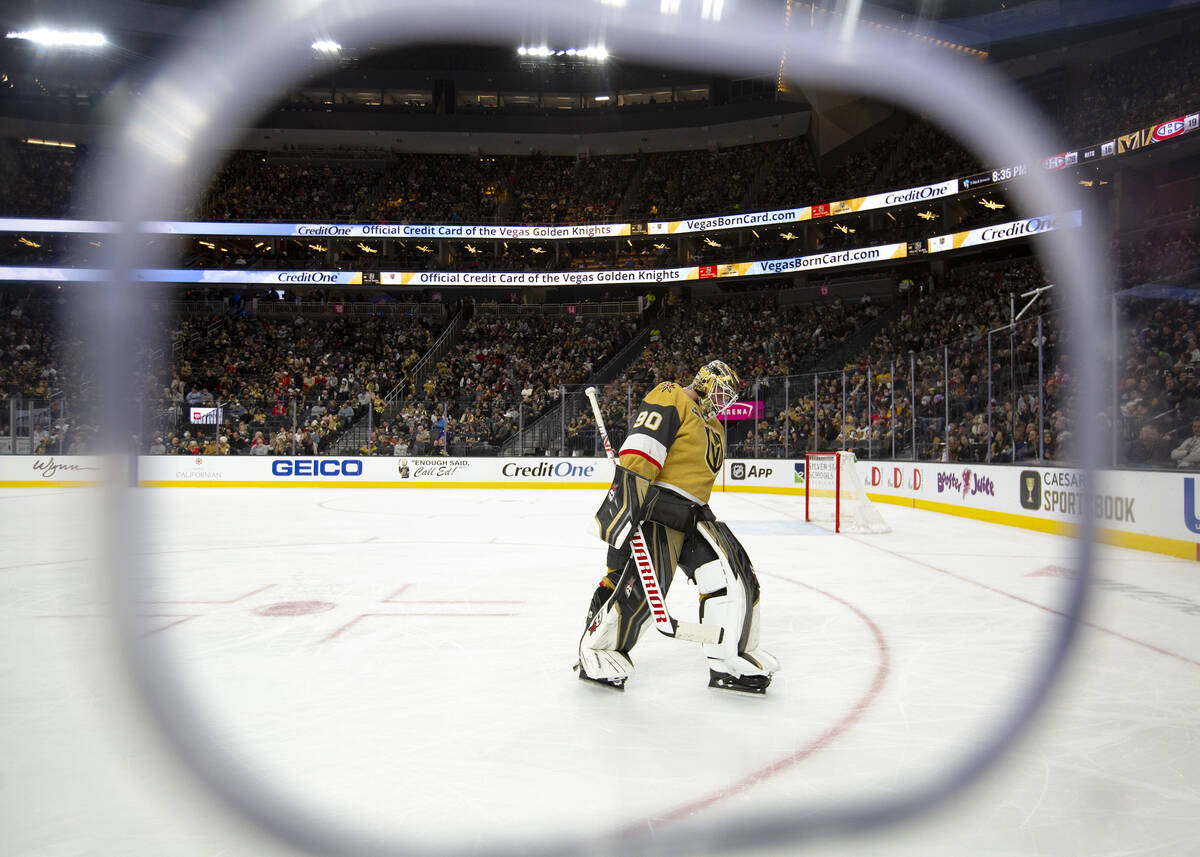 Golden Knights goaltender Robin Lehner (90) skates around the net during the second period of an NHL hockey game against the Canadiens at T-Mobile Arena on Thursday, Jan. 20, 2022, in Las Vegas. (Ellen Schmidt/Las Vegas Review-Journal) @ellenschmidttt 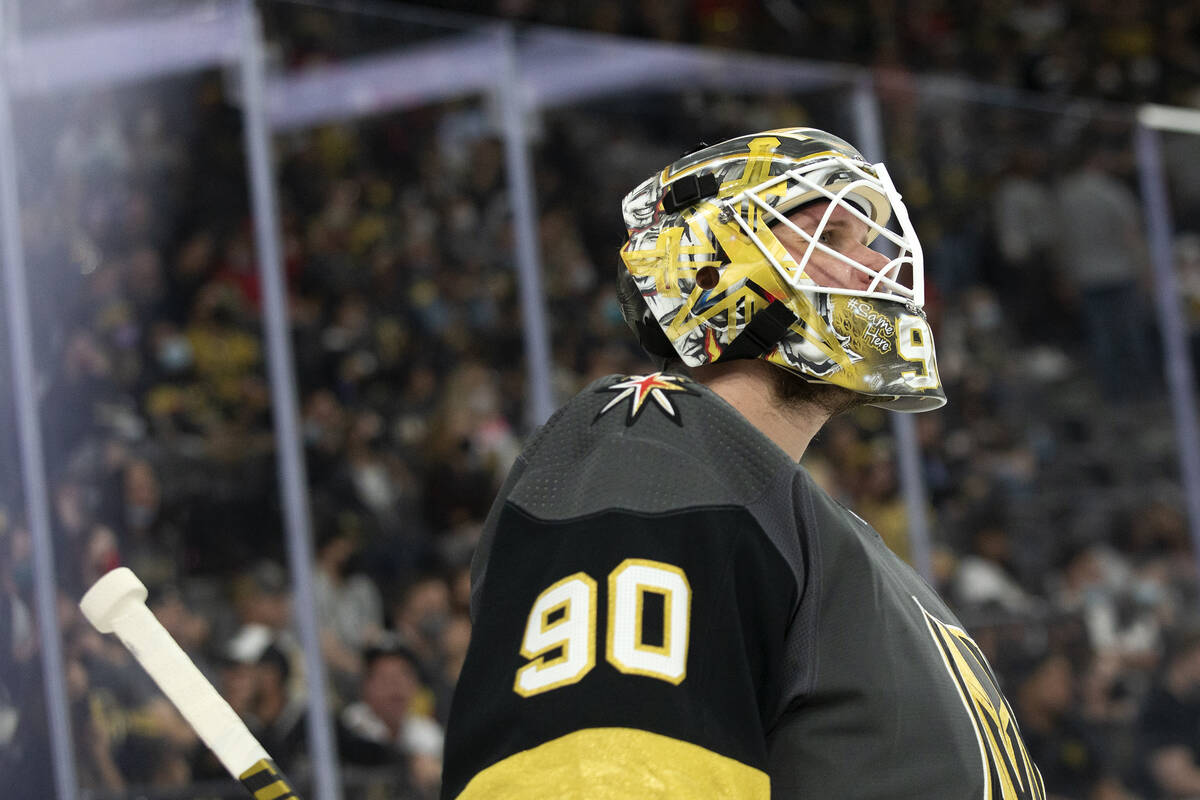 Golden Knights goaltender Robin Lehner (90) skates around the net after letting in a goal to the Coyotes during the second period of a preseason NHL hockey game on Thursday, Oct. 7, 2021, at T-Mobile Arena, in Las Vegas. (Ellen Schmidt/Las Vegas Review-Journal) @ellenschmidttt 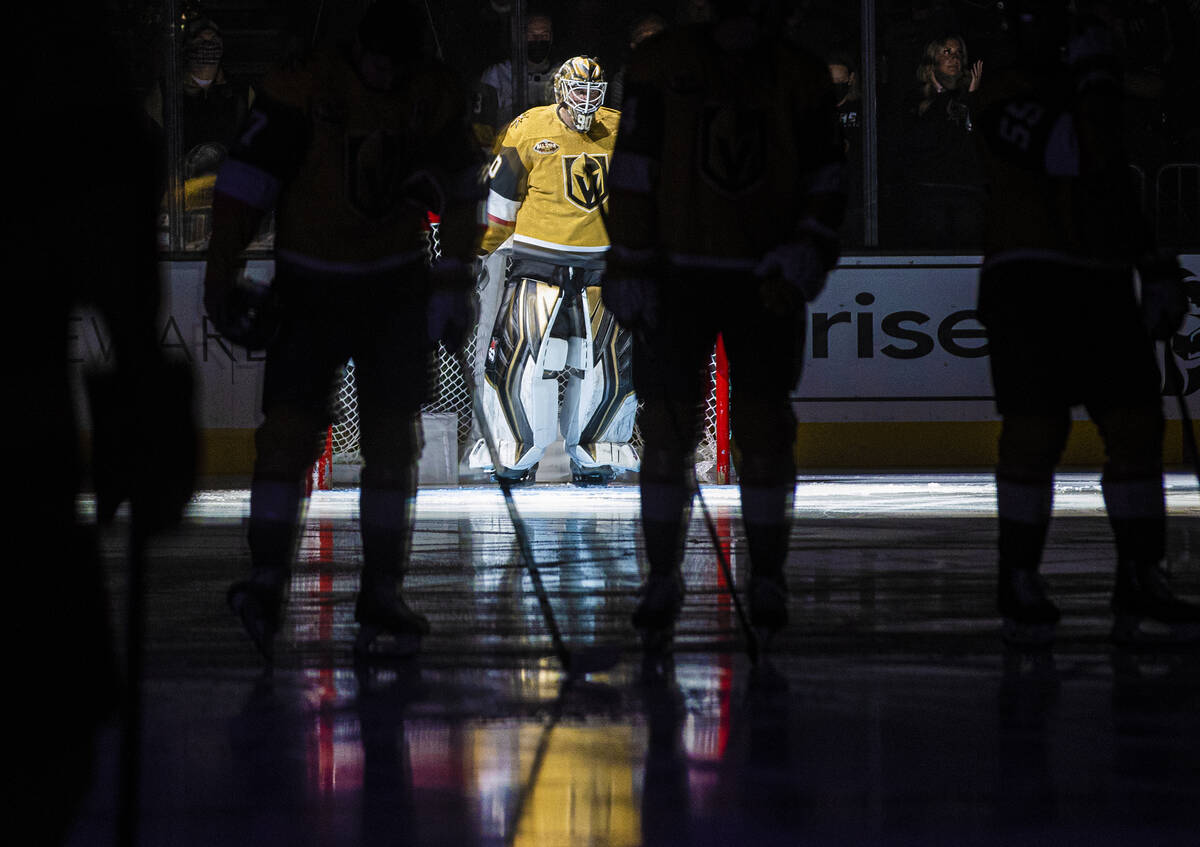 Golden Knights goaltender Robin Lehner (90) is announced before the start of an NHL hockey game against the Carolina Hurricanes on Tuesday, Nov. 16, 2021, at T-Mobile Arena, in Las Vegas. (Benjamin Hager/Las Vegas Review-Journal) @benjaminhphoto 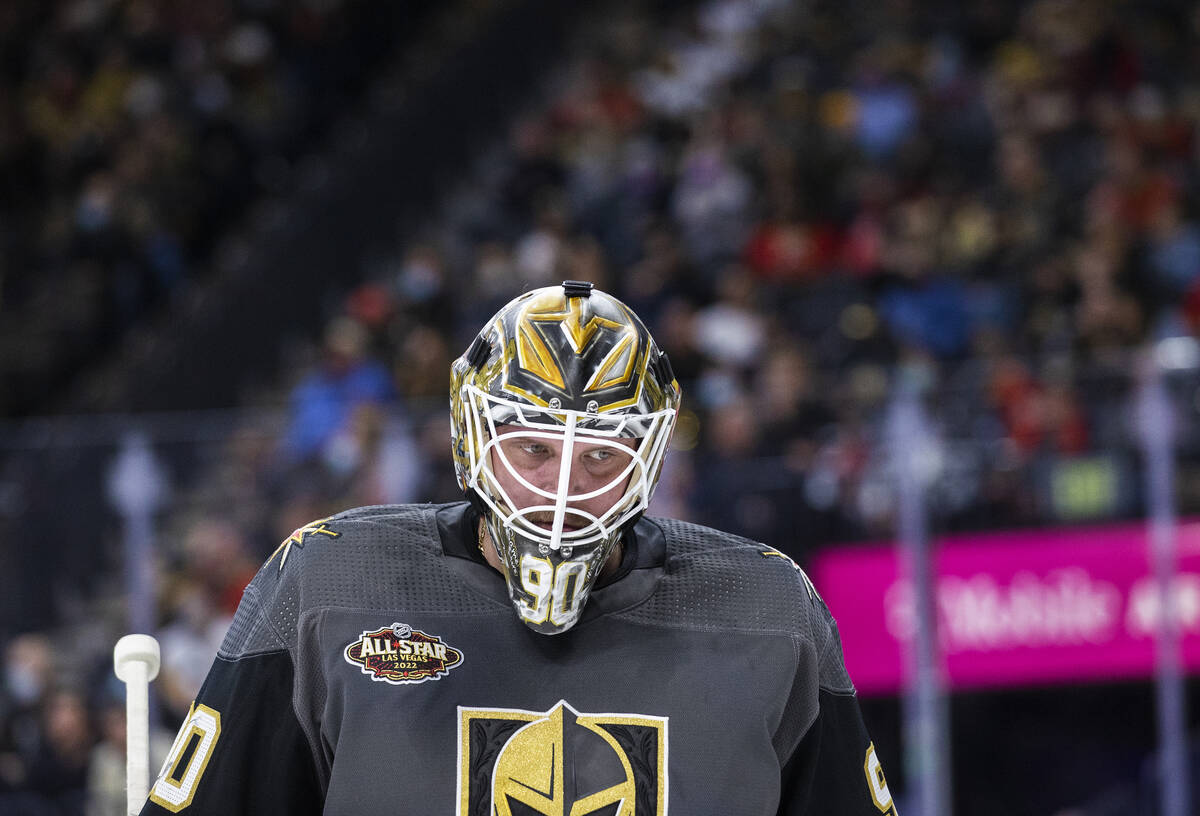 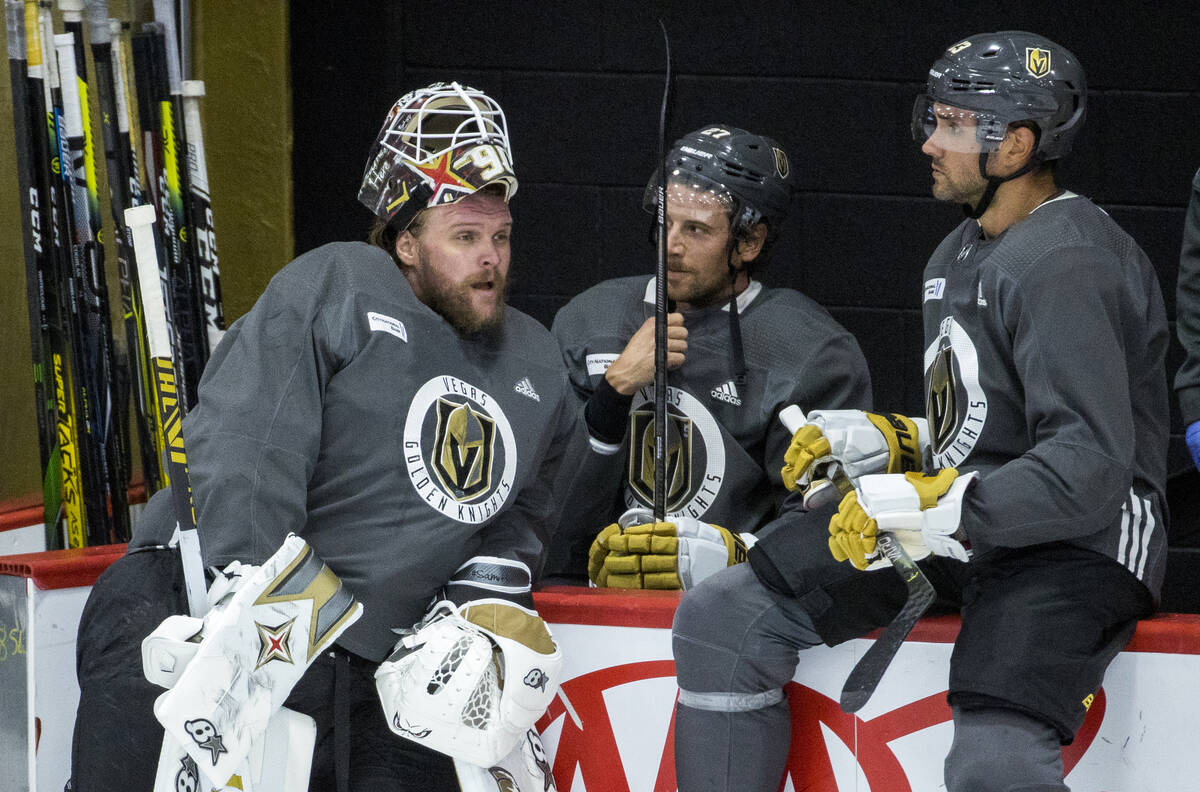 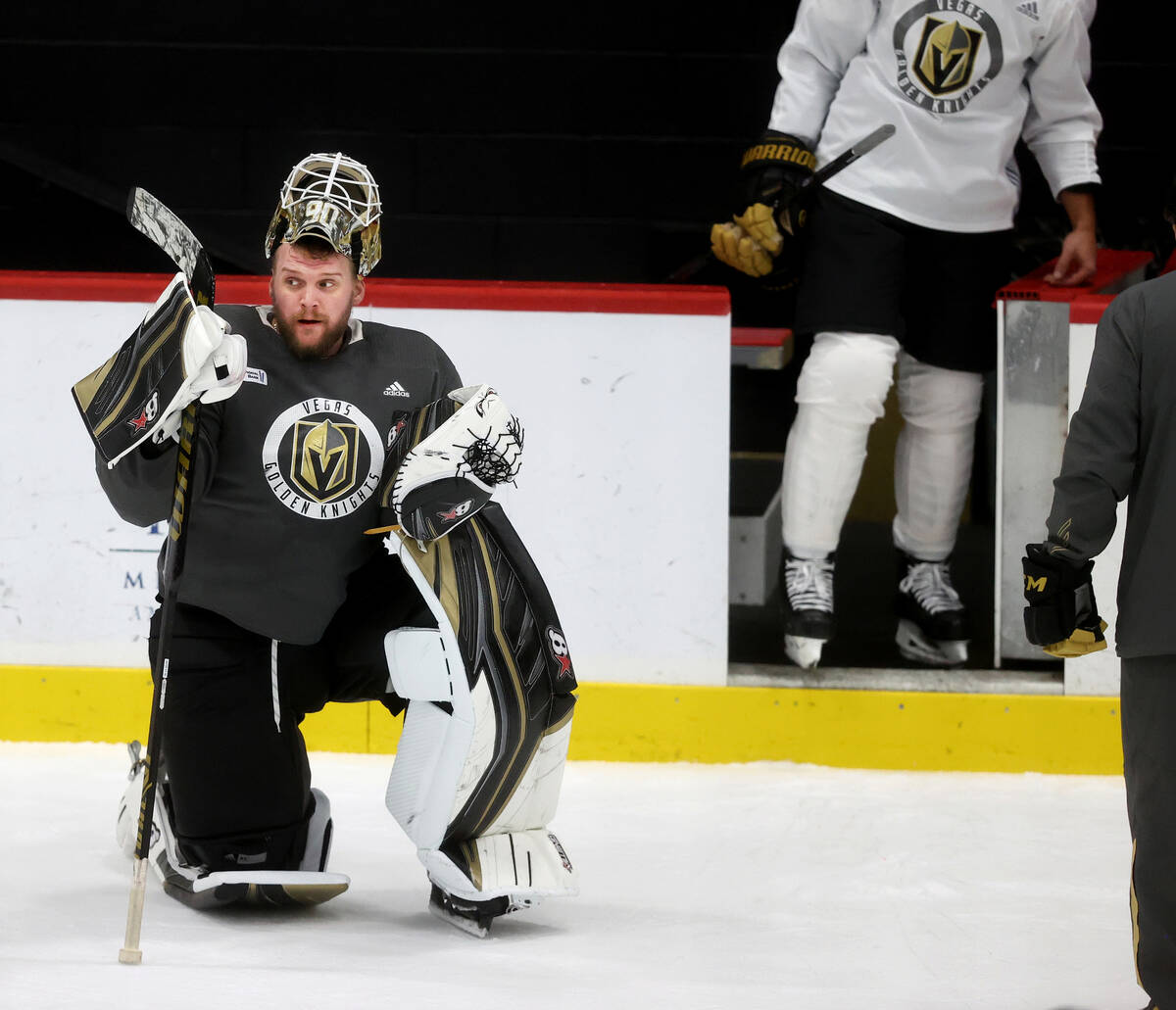 Robin Lehner’s decision to purchase a snake-breeding business in 2017 began a “Tiger King”-like saga that featured alleged nonpayment of funds by Lehner and the murder of the snake farm’s previous owner by his wife and another man.

It was only part of a series of financial woes involving Lehner’s other companies that in December led the Vegas Golden Knights goaltender to file for Chapter 7 bankruptcy.

In June, Lehner was sued for nearly $4 million tied to Solarcode, a business for which Lehner and his father are listed as owners. A Wisconsin company named Eclipse Service Inc. was behind the lawsuit, claiming the Lehners failed to repay a business loan.

After a payment plan was agreed upon in January 2022, Eclipse Service claims the Lehners failed to make a payment in 2022, which led to the litigation.

In the bankruptcy filing, Lehner and his wife claimed up to $50 million worth of business-related debt. The filing listed their business as RL Exotics, which the bankruptcy filing said would need immediate attention because of the exotic pets that live on the property.

Zach Miller, a former NFL tight end turned financial adviser with AWM Capital, said the $1.2 million Lehner paid for the snake farm and the massive amount of debt he reported in his bankruptcy filing caught him off guard.

“Business ventures are already risky, and when you add massive debt on top of that, it can be devastating when things go wrong,” Miller said. “Putting such a large amount into a single investment violates the key tenet of preserving wealth — diversification.

“As a pro athlete on a big contract, you’ve already won the game, no need to take excessive risk. Private investments and business ventures are where athletes lose the most.”

Lehner signed a five-year, $25 million contract with the Knights in October 2020 that expires after the 2024-25 season. He has not played this season after undergoing surgery on both hips.

Attempts to obtain comments from Lehner’s lawyers and the Golden Knights were unsuccessful.

In June 2017, months after the two sides entered into a deal for the business, Renick was murdered by his wife, Lynlee Renick, and another man at their Missouri property where he bred snakes, according to a January 2020 ABC 17 report.

The story reads like a script from “Tiger King,” the hit 2020 Netflix documentary series that explored the world of big cat breeding and its bizarre underworld, populated by eccentric characters, murder and mayhem.

According to a probable cause statement by Lynlee Renick to the Missouri State Highway Patrol, she was worried Ben was in the process of leaving her because of money she was draining from the business. Lynlee had opened a spa and was in debt to Capital One and construction companies totaling more than $10,000. She was eventually sued, the ABC 17 report noted.

The highway patrol’s probable cause statement noted Lynlee was motivated by the concern that she could lose custody of her children because of her financial situation. She worried that Ben Renick had the monetary means to provide for the children.

Attempts to obtain comments from the Missouri State Highway Patrol were unsuccessful.

Lynlee Renick in 2018 requested allowances totaling more than $19,000 from Ben Renick’s estate. That hearing was delayed after she was arrested in 2020 in connection with his murder.

A now-settled lawsuit filed on behalf of Renick Reptiles in 2018 after Ben Renick’s murder states that after making the initial $100,000 payment in February 2017 and taking over ownership of the snakes, Lehner failed to make subsequent payments, court records show. The following payments were to be $200,000 apiece, made on or before the first of the month in April, June, August, October and December 2017.

After Renick Reptiles’ suit was filed, Lehner submitted a counterclaim. In it, he said he made the April 1 payment and that he invested millions of dollars in the snake business after Ben Renick’s death. The counterclaim stated the investment was made because the snakes were being bred in an unsupervised manner after the murder.

“This unauthorized breeding of Lehner’s collection has further diminished the value of the assets (snakes) to an undetermined, but, upon information and belief, significant amount,” the counterclaim stated.

The countersuit claimed the agreement required Ben Renick to care for the snakes because he was the only person who knew of their unique DNA, and that Lehner would pay for boarding costs.

“Unfortunately, in early June of 2017, Ben Renick died under mysterious circumstances that are still under investigation by local police authorities,” Lehner’s counterclaim read. “Notwithstanding Ben Renick’s death, Renick was still obligated pursuant to the agreement to monitor, care for, and properly breed the collection.”

The suit was settled in November 2019, and RL Exotics LLC has been operating ever since. The details of the final settlement remain confidential, court records show.

Lynlee Renick was eventually sentenced to 16 years in prison after being found guilty of second-degree murder and two armed criminal charges, according to a January 2022 ABC 17 report. Prosecutors said they believed Lynlee Renick killed Ben Renick for financial reasons.

The 2022 business loan lawsuit isn’t the only litigation tied to Solarcode and alleged financial problems.

Solarcode has faced financial problems for years, including lawsuits filed by former contractors and a partner, records show.

In 2020, Mats Nilsson, who said he was a partner in Solarcode and another firm, sued Lehner, his father and the company, charging the company failed to pay him for his share of the business.

Solarcode, which said they had exclusive patents for a dish-based solar energy production, owed Nilsson $75,000 and 33 percent of a $12.5 million contract it allegedly had with Native American groups to provide the technology, the lawsuit charges.

The lawsuit was dismissed without prejudice in May 2021 — six months after it was filed. Nilsson could not be reached for comment, and attorneys on both sides of the case did not respond to calls and emails seeking comment.

About a month before Nilsson’s case was dismissed, two men who said Lehner contracted them to work for Solarcode also sued, claiming he failed to pay their employment contracts.

Carey Hedstrom and Ernest Smith, who worked on the company’s business plan and developed business contacts, charged that Solarcode officials lured them from other jobs and promised six-figure salaries that were never paid, the 2021 lawsuit said.

Smith declined to comment, and Hedstrom and attorneys in the case could not be reached for comment. The court docket indicates there was a settlement in the case in July 2021 and the case was dismissed in November 2021.