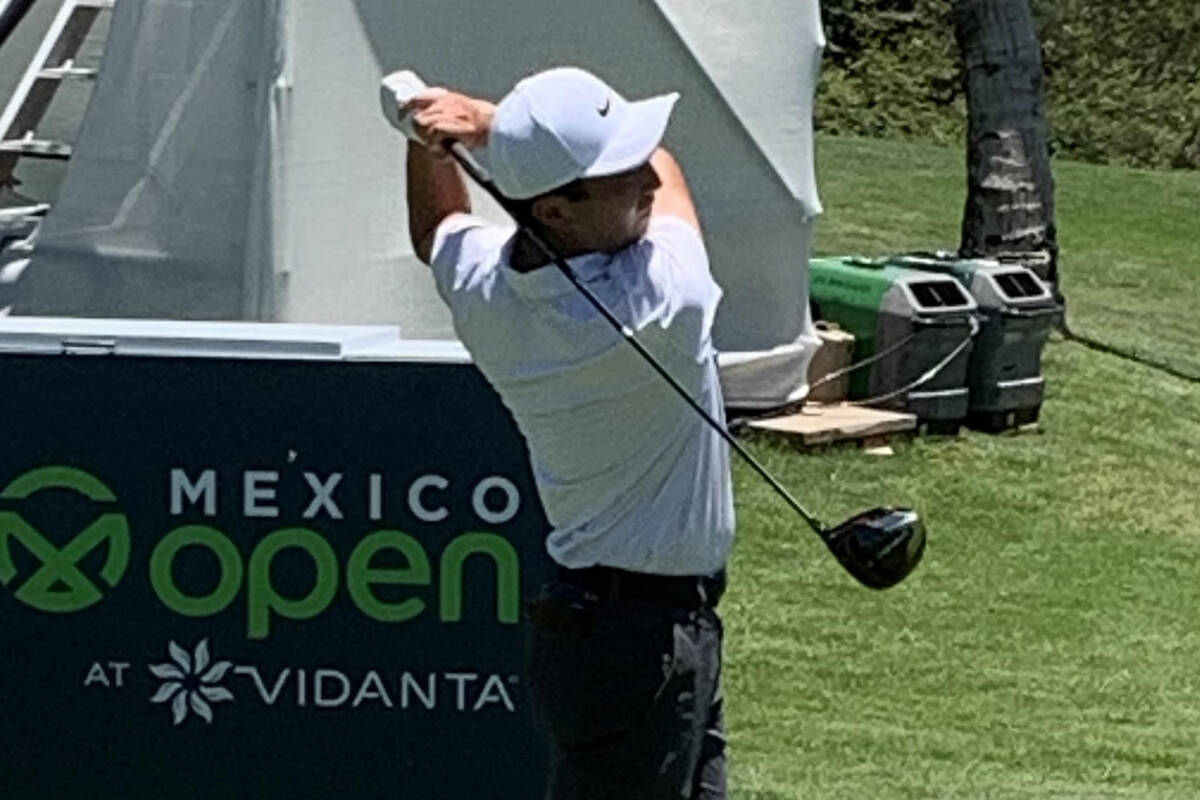 Doug Ghim tees off on the 12th hole during the second round of the Mexico Open at Vidanta on April 29, 2022. (Greg Robertson/Las Vegas Review-Journal)

Doug Ghim is determined to avoid being on the bubble this season on the PGA Tour.

The Las Vegas golfer made life difficult for himself last summer as he fought to stay inside the top 125 in the FedEx points list to guarantee himself a job for this year. He limped to the finish line, missing his last three cuts of the season, but ultimately ended at No. 125 and secure for his fourth full season on tour.

“Last year was a tough year,” Ghim said. “I made a lot of changes, but I made a lot of progress. Unfortunately it didn’t show up until late in the year. Had a couple of opportunities in contention, but still didn’t capitalize. Still learning.”

The bright spot came for the second consecutive year at the Players Championship, where he finished sixth for his only top-10 finish. One year earlier he played in the final group on Sunday at TPC Sawgrass, but stumbled in the final round.

Despite the tough season, Ghim is optimistic about what lies ahead.

“The game feels so much better than a year ago,” he said. “Very excited about the new season and a clean slate.”

Ghim, once the top-ranked amateur in the world while playing at the University of Texas, spent most of 2022 changing his swing from a draw to a fade, so he had to relearn how to play golf courses that were already familiar to him.

The 26-year-old has a strong support system in Las Vegas, playing out of Southern Highlands where he’ll practice with Kurt Kitayama, Xander Schauffele, Kevin Na, Alison Lee and others to keep his game sharp. He also has his former assistant coach at Texas in Jean-Paul Hebert, who now leads UNLV. It’s a connection Ghim is glad to have so close.

“I wouldn’t be here without him,” Ghim said of Hebert. “He was like the older brother/uncle that I never had. He’s super cool and knows a lot about the game. It’s super cool to have someone that influential in my life at the time of college. I’m excited that he got the opportunity and that he gets to be closer to me.”

Ghim’s connection to Las Vegas can be traced to UNLV. After graduating from Texas, the Illinois native chose Southern Nevada as his home due in part to his friendships with Rebel golfers John Oda and Shintaro Ban. He’s happy with his decision and has settled into Las Vegas quite easily.

“I’ve loved it ever since coming here,” he said, noting the great golf courses, easy travel and tax benefits of living in Nevada.

Ghim’s next opportunity to show his hard work is paying off comes this week in the Caribbean, where he’s playing in the Bermuda Championship. It’s a field devoid of big names with Seamus Power at No. 48 the highest-ranked player in the field, and just four players inside the top 100 teeing it up. It’s the perfect opportunity for a player like Ghim to step up and change last season’s trajectory.

“I made a lot of cuts, I just didn’t have a lot of high finishes,” he said of last season.

UNLV junior Caden Fioroni is one of 19 golfers named to the final fall Haskins Award Watch List, which honors the nation’s most outstanding collegiate golfer. He is the first Rebel named to the list in four years, and he hopes to join Ryan Moore (2005) as the only UNLV players to win the award.

Fioroni has a 68.58 scoring average through the first four tournaments of the season. He has three top-three finishes in those events, including at the prestigious Blessing Collegiate in Arkansas.