Ahead of UFC on ESPN 11 on June 20, the 24 fighters competing in the event stepped on the scale at official weigh-ins at the UFC Apex. Frank Camacho, who's expected to face Justin Jaynes in a lightweight contest, was the only fighter to miss weight and came in two pounds over the 156-pound limit. (Heidi Fang/Las Vegas Review-Journal)
UFC on ESPN 11, taking place at the UFC Apex on June 20, will feature 12 bouts. In the main event, heavyweights Alexander Volkov and Curtis Blaydes will look to prove who's the next top contender in the division. (Heidi Fang/Las Vegas Review-Journal) 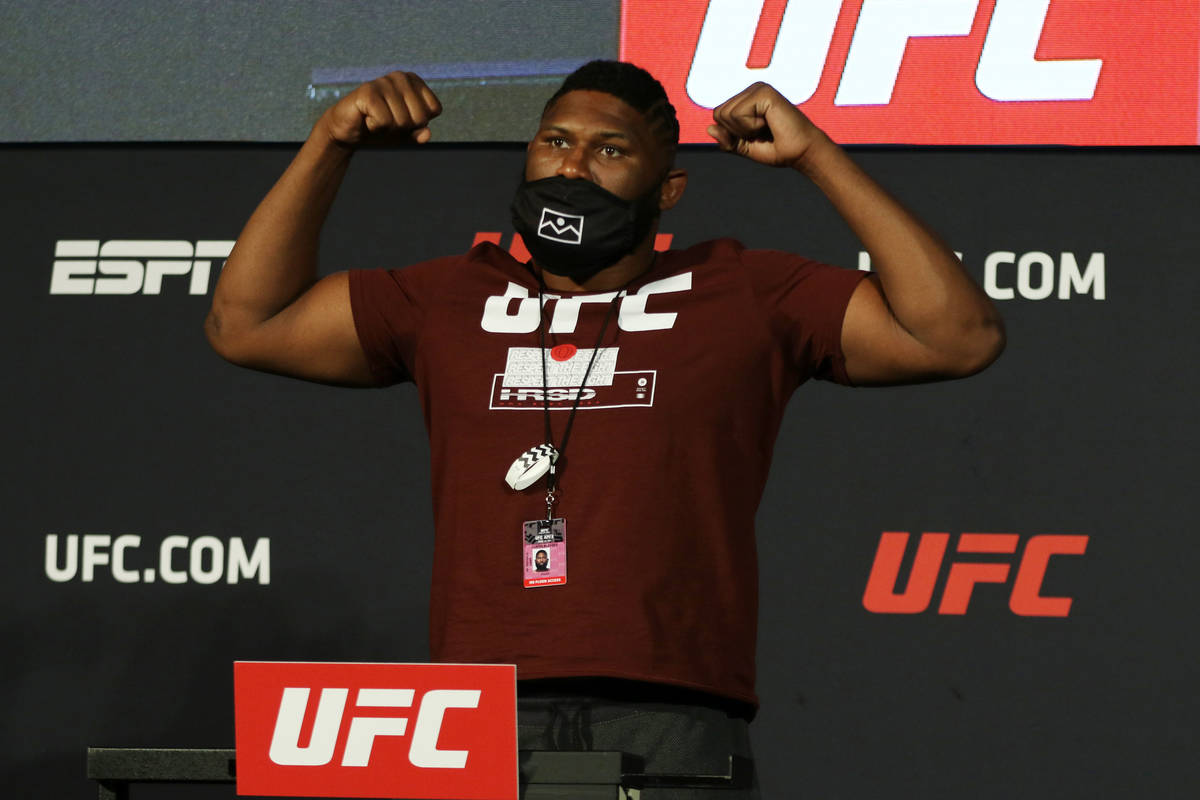 UFC heavyweight Curtis Blaydes poses on the scale at weigh-ins at the UFC Apex in Las Vegas, Friday, June 19, 2020. He will compete in the main event of UFC on ESPN 11 on Saturday. (Heidi Fang) @HeidiFang 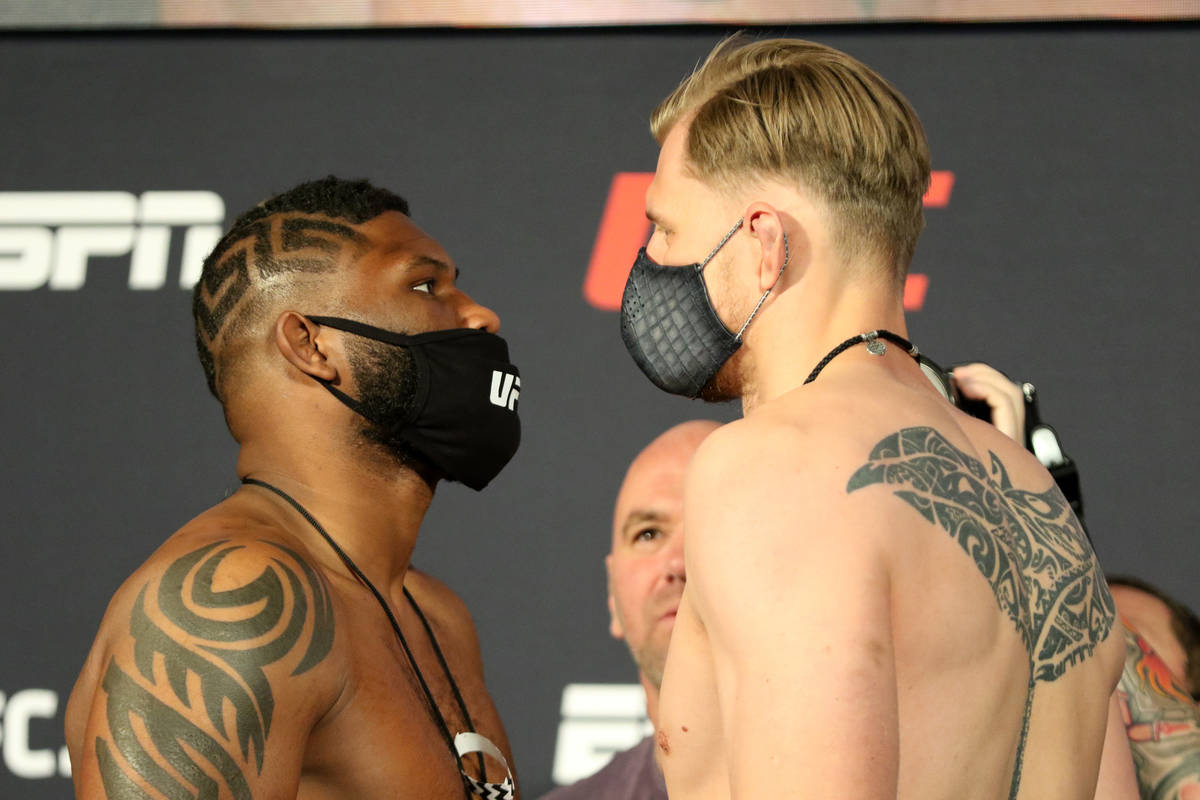 UFC heavyweights Curtis Blaydes, left, faces off against Alexander Volkov, right, as UFC president Dana White looks on during weigh-ins at the UFC Apex in Las Vegas, Friday, June 19, 2020. Their bout will serve as the main event at UFC on ESPN 11 on Saturday. (Heidi Fang/Las Vegas Review-Journal) @HeidiFang

The UFC’s heavyweight division is loaded with big sluggers who look to end fights with one shot.

Curtis Blaydes is proud to buck that trend.

“My game plan is always the same no matter who I fight,” he said Thursday. “It’s pretty universal. Pressure, pace, wrestling, ground and pound. It doesn’t matter who you are. It works on everyone.”

It certainly has for Blaydes, a former junior college national wrestling champion who will put his three-fight winning streak on the line against Alexander Volkov in the main event of the UFC on ESPN 11 card at the UFC Apex facility on Saturday.

The Chicago native is 8-1 since dropping his UFC debut in April 2016, and he believes his commitment to his wrestling roots contributes to his success.

“Nobody in this division has my wrestling pedigree,” he said. “They’re not built for this. It’s a way of life to wrestle. It’s hard to build up the muscle memory to defend the type of wrestling and pressure I’m bringing. It’s grueling and grinding, and guys don’t want to do it.

“Guys want to have space and throw haymakers at each other because it takes a lot less energy. When a guy is hanging on you and making your arms and legs and neck tired, they don’t want to be there anymore.”

Blaydes particularly enjoys the moment in a fight where he feels the opponent break.

“It usually happens in the second round,” he said. “I don’t think I’ve gotten anyone out in the first round because that’s not my game. My game is based on attrition. It will wear you out. … The fight with Alistair Overeem, I laid on him in the first round, laid on him in the second round and then I felt his arms weren’t very strong anymore, and I was able to get my elbows loose and land a couple of those and it was over.”

The origins of his style were developed at De La Salle Institute in Chicago, where he went 44-0 as a senior and won a state high school title. He also played football for the former all-boys school. Blaydes has said one of the things that was appealing about that environment was how mean girls had been to him growing up with a speech impediment.

He earned a scholarship to Northern Illinois and went 19-2 as a freshman before transferring to Harper College, where he won a national title and left school to pursue a mixed martial arts career.

Blaydes went 8-0 as an amateur and picked up five quick pro wins by knockout before earning a UFC contract. Francis Ngannou spoiled his UFC debut and won their 2018 rematch, the only two losses of Blaydes’ career.

Ngannou is now the only fighter standing in the way of Blaydes getting a crack at the winner of the upcoming title bout between Daniel Cormier and Stipe Miocic, should he get by Volkov on Saturday.

Blaydes hopes to get another crack at Ngannou, one of the most feared strikers in the world.

“I’m going to be around for a long time, so it will happen again,” Blaydes said. “I don’t view him the same way everyone else does because I’ve been in there with him twice and I’m alive still. Everyone else thinks he’s Godzilla.

“I view him as a man with pros and cons in his game. One of his biggest cons is lack of conditioning and lack of grappling ability, and those are the things I’ll target when I’m in there with him again.”

He’ll have to get through Volkov first in the headliner of a 5 p.m. main card on ESPN and ESPN-Plus, with the prelims airing on both platforms at 2 p.m. 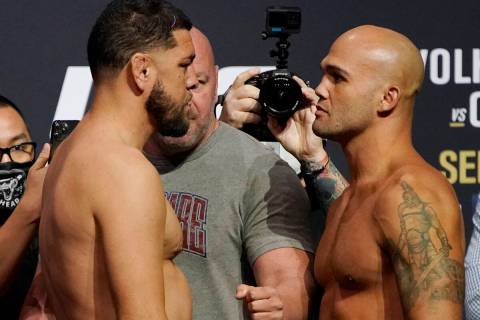 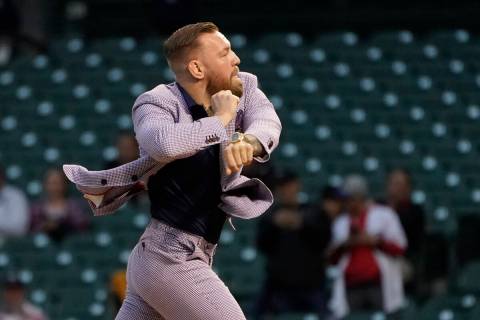