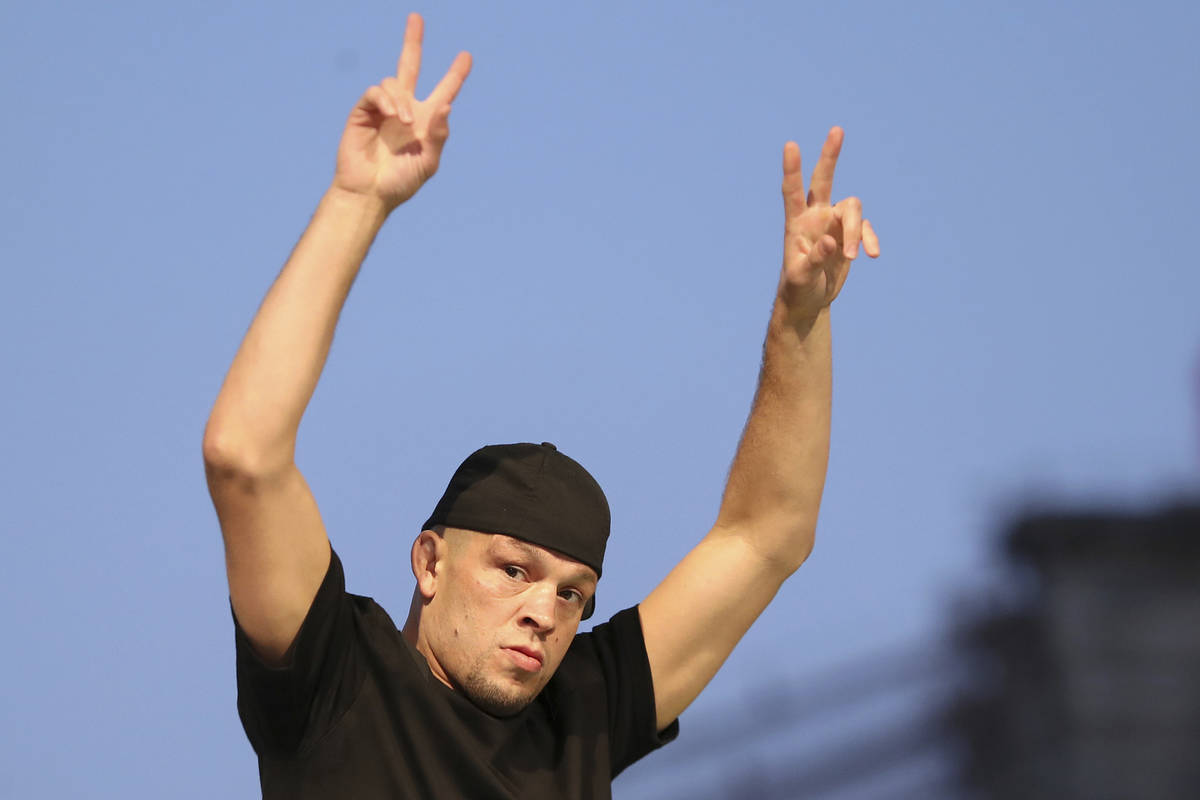 FILE - Nate Diaz is seen at a news conference for the UFC 244 mixed martial arts event in New York, in this Thursday, Sept. 19, 2019, file photo. The UFC will no longer punish fighters for using marijuana in most cases, making a major change to its anti-doping policy. The world’s largest mixed martial arts promotion won’t allow fighters to compete while under the influence of cannabinoids, but the promotion recognizes that MMA fighters often use marijuana for pain management or relaxation. Diaz is among many fighters who already used marijuana actively when not in competition. (AP Photo/Gregory Payan)

UFC fighters will no longer be subject to discipline for positive marijuana tests under the organization’s anti-doping policy.

The UFC and the U.S. Anti-Doping Agency, which administers the policy for the mixed martial arts league, announced Thursday a significant change to the program’s rules on cannabis and cannabinoid constituents.

Positive tests for carboxy-THC will only result in disciplinary action should evidence suggest it was used “intentionally for performance-enhancing purposes.”

The changes are effective immediately, though local jurisdiction rules will still apply.

“The goal of the UFC Anti-Doping program is to protect the rights of clean athletes by deterring intentional cheaters and holding those who choose to dope accountable in a fair and effective way,” USADA CEO Travis T. Tygart said. “These amended rules are aimed at this and to continue our focus on preventing intentional cheating and not to unnecessarily punish athletes for behavior that does not impact the fairness or safety of competition.”

UFC Senior Vice President of Athlete Health and Performance Jeff Novitzky said the decision is not an endorsement of fighters competing under the influence of marijuana.

The decision was made to address cases where fighters were penalized for positive tests “in-competition” despite not having consumed marijuna for several days or even weeks because the substance remained in their body at levels above the allowable threshold.

The UFC and USADA will instead monitor visual evidence of potential impairment to attempt to ensure fighters don’t step into the cage under the influence.

“We have learned that urinary levels of carboxy-THC are highly variable after out-of-competition use and have poor scientific correlation to in-competition impairment,” Novitzky said. “THC is fat soluble, meaning that once ingested, it is stored in fatty tissues and organs in the body and can be released back into the circulation, and consequently carboxy-THC appears in the urine, sometimes long after ingestion. It is therefore not an ideal marker in athletes to indicate in-competition impairment.”

Several fighters have indicated in the past through the media and in athletic commission hearings that they not only use marijuana recreationally, but as part of a regular routine for stress and pain management. It has been suggested it is an alternative for more dangerous and addictive alternatives, like opioids.

One major caveat is that athletes will still be subject to the marijuana rules in whichever jurisdiction their fight takes place. So if a card is in Las Vegas, Nevada Athletic Commission rules will still apply.

Novitzky hopes the change in the UFC policy helps spur a broader discussion that leads to similarly updated regulations among various commissions.

“The bottom line is that in regard to marijuana, we care about what an athlete consumed the day of a fight, not days or weeks before a fight, which has often been the case in our historic positive THC cases,” he said.

According to a statement from the UFC, research continues into developing tests that measure potential impairment instead of just the presence of the substance.

The updated policy also removed all other “phyto” cannabinoids from the Prohibited List. These substances are often found in CBD products that are not believed to have significant performance benefit or negative health and safety consequences.