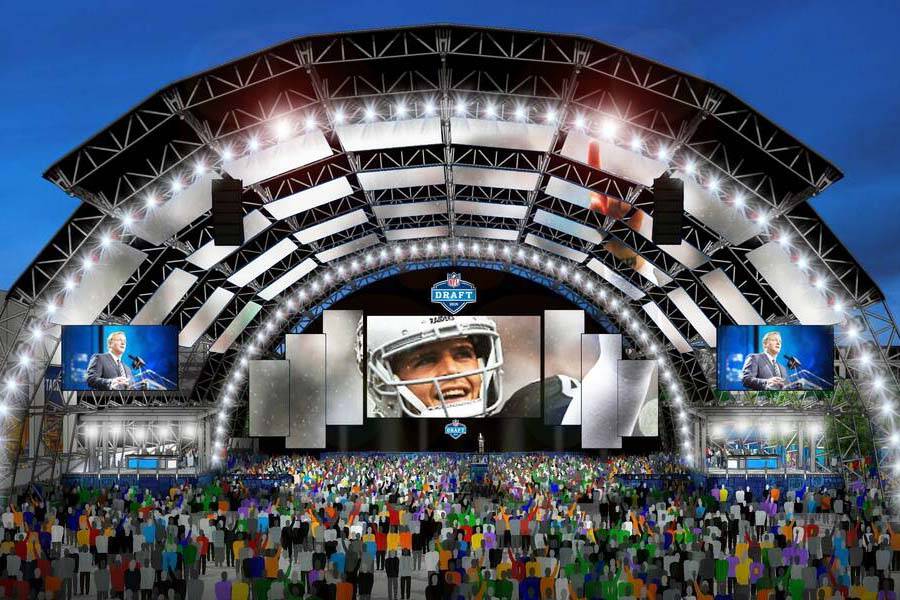 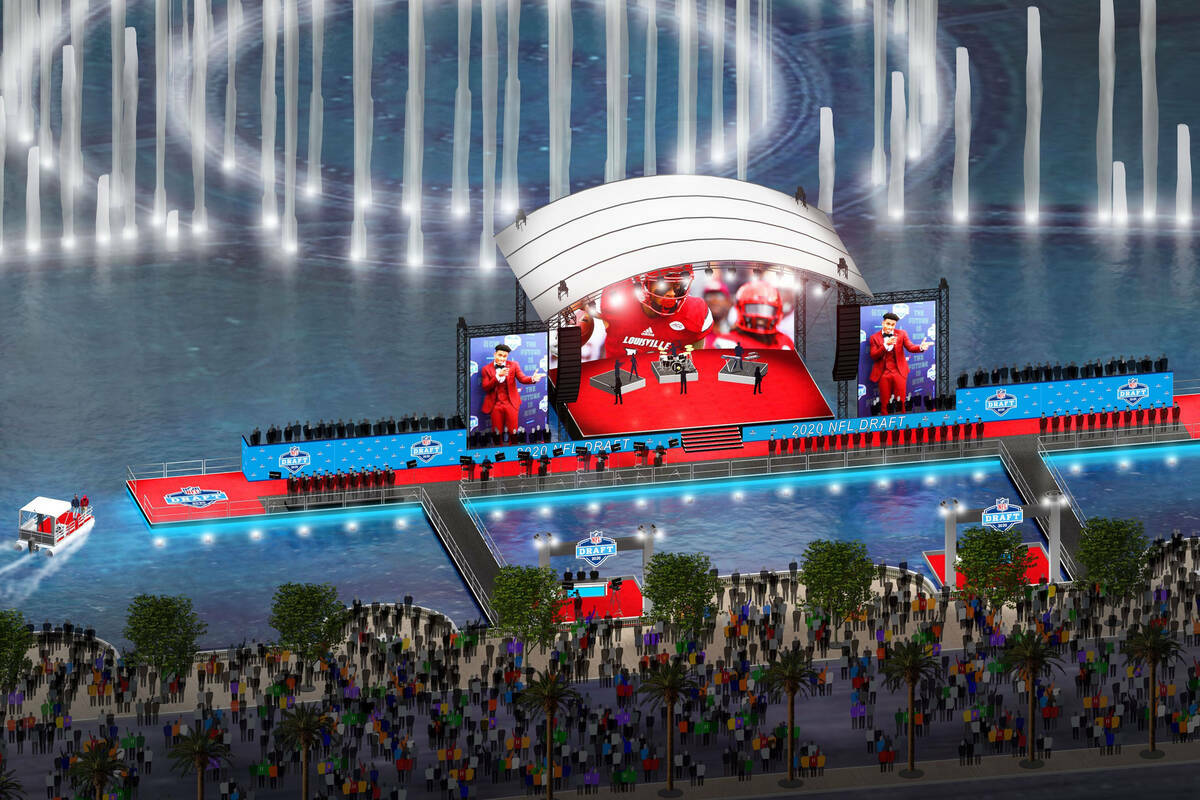 The next batch of NFL stars will be showcased on the Fountains of Bellagio before being whisked away to the Caesars Forum convention center to hear their names called in the NFL draft. (NFL rendering)

With the NFL draft in Las Vegas quickly approaching after being postponed in 2020, many are still wondering how they can attend the event, scheduled for April 28-30.

There are multiple ways to do so, with the most important one, general admission, free of charge to the public.

During the draft, fans will be allowed to congregate in three areas: the Fountains of Bellagio, the Draft Theater next to Caesars Forum and the Draft Experience located directly next to the theater area. All are open to general admission fans.

“The Bellagio fountain … will be active all three days in some fashion,” said Matt Shapiro, vice president of event strategy for the NFL. “It will serve as the red carpet on Thursday night, but will also have additional activities that fans can see on that stage.”

Fans of all ages can access the Draft Experience and the Draft Theater area free of charge. Tickets aren’t required, but fans must download the NFL One Pass smartphone application.

“There are no tickets or reservations for the draft. It’s entirely free, but the NFL One Pass app is required for entry,” Shapiro said. “That really serves as the people’s ticket.”

The app will be available for download in the next couple of weeks. Shapiro suggests fans download it and register in advance of the draft.

The NFL will also share up-to-date information relating to the draft via the app. All fans who register for the app will also be entered into a chance to win a trip to Super Bowl LVII in Arizona.

General admission fans will not have a designated seating area to watch the draft. That area will begin where the massive canopy over the main stage and seating area ends.

The fan zone includes several attractions attendees can participate in and view. They include games like the 40-yard dash, along with food and beverage options, exclusive merchandise and autograph opportunities. The Raiders’ three Super Bowl trophies will be on display.

“What I’m so excited about … is the involvement and opportunities for locals to participate in,” said Michael Naft, a Clark County commissioner. “The fact that anybody in our community can come down and enjoy the festivities, enjoy the plaza and really appreciate the history and see the memorabilia. I think it’s going to be an exciting and historic moment for the Las Vegas Strip.”

For fans looking for an upgraded fan experience at the draft, NFL partner On Location has various options.

On Location offers exclusive seats that include seats inside the draft theater, something general admission lacks.

“As the (draft) experience has grown in so many ways, there are not as many seats as, say, a stadium for an NFL game,” Shapiro said. “So, one thing that On Location is able to offer is an opportunity to get a ticketed experience, right within the theater. Also with some other hospitality with it.”

Those looking for Day 1 packages are out of luck, as those are already sold out.

Day 2 packages can still be purchased, but have limited availability according to On Location.

■ A Friday morning behind-the-scenes tour, including a podium photo opportunity.

■ A tiered and elevated seating deck.

“It’s a great opportunity for our fans to get up close and get in on some of the action,” Shapiro said.