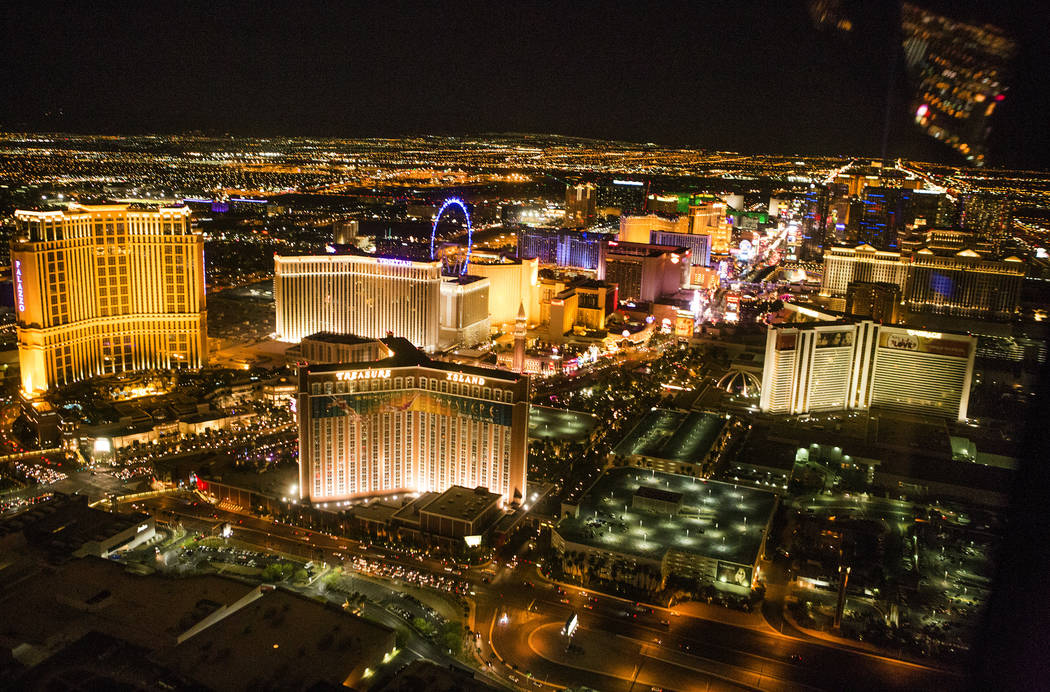 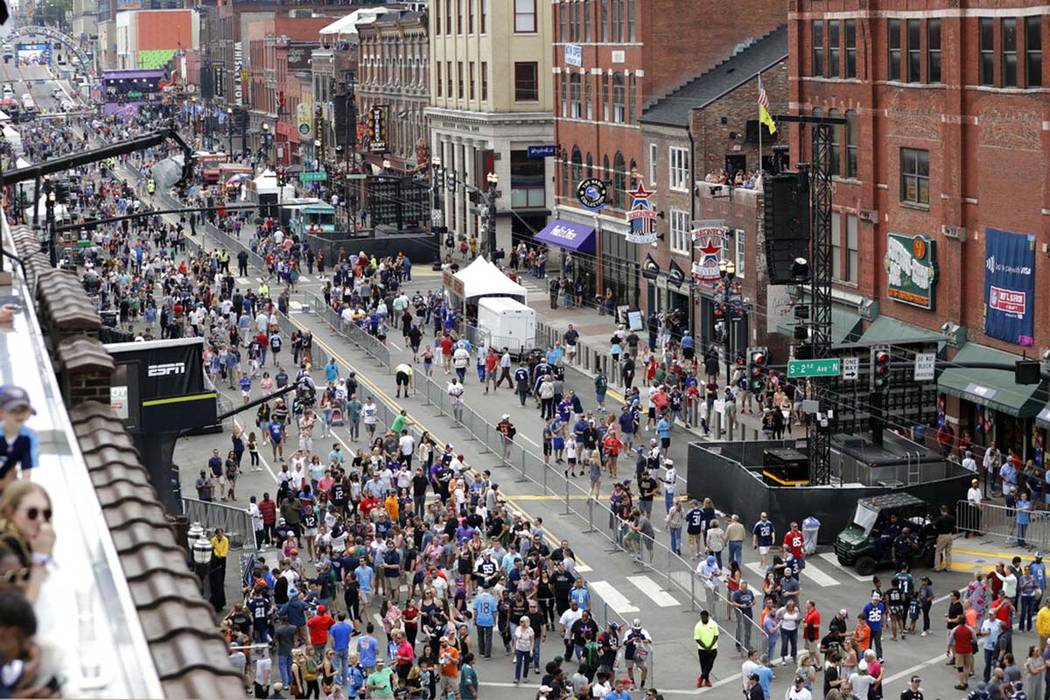 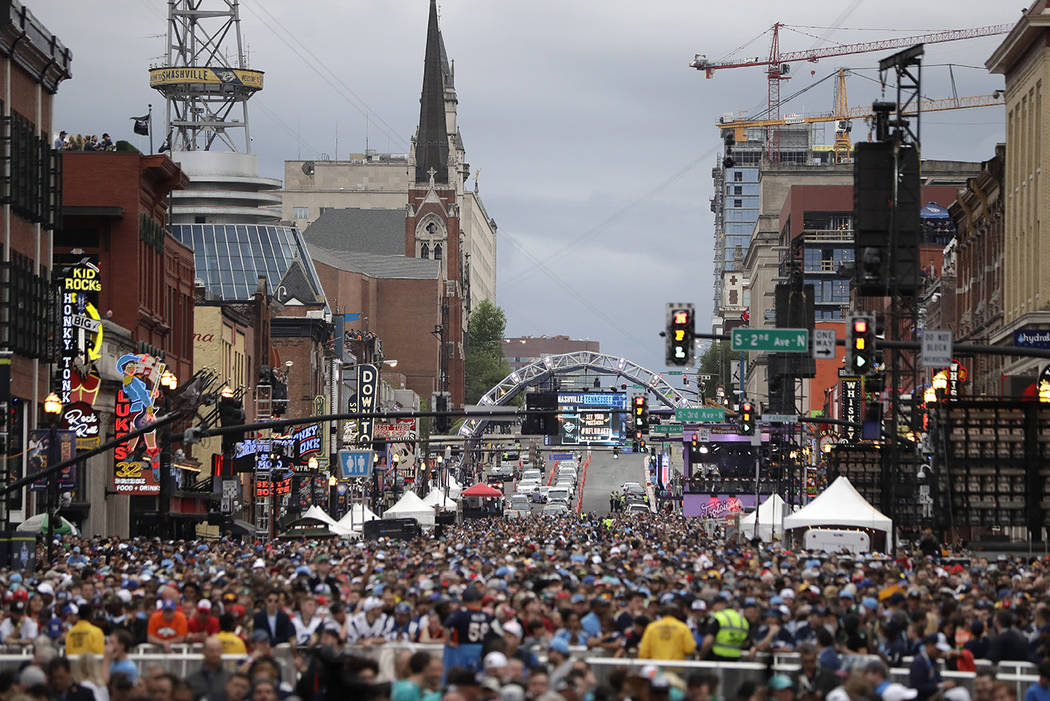 Fans watch the main stage ahead of the first round at the NFL football draft, Thursday, April 25, 2019, in Nashville, Tenn. (AP Photo/Mark Humphrey) 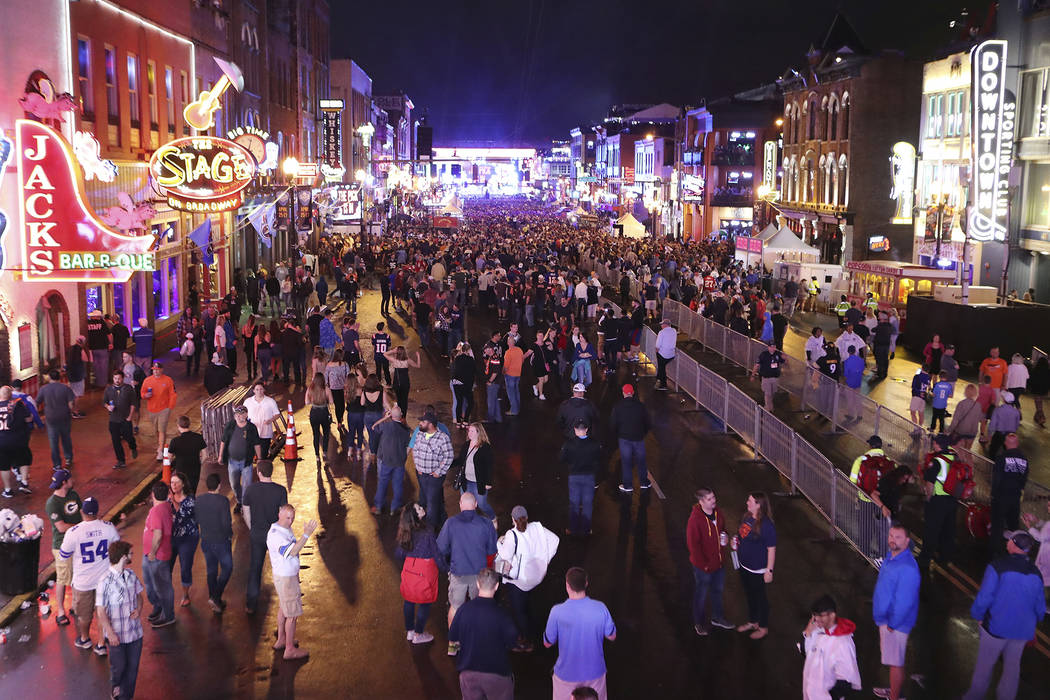 Fans line up Broadway in the rain to watch the first round of the NFL football draft in Nashville, Tenn. on Thursday, April 25, 2019. (AP Photo/Gregory Payan)

Hooters is known for its wings, waitresses and constant stream of sports on its TVs.

That could be why its Las Vegas hotel is raising its prices tenfold for the 2020 NFL draft, to be held April 23-25 near the Strip. Room rates at the Hooters Hotel start at $999 for the first day of the draft, a 1,165 percent markup from the previous week’s $79, according to a May 9 search on Booking.com.

Hooters isn’t alone. Hotels all across the Las Vegas Valley are raising their rates during the event, which is expected to bring hundreds of thousands of visitors to the Strip.

The draft has “become a great event for visitors to travel to a new city and cheer for their team,” said Macquaire analyst Chad Beynon. “While we don’t expect room rates to be as high as the major citywide conventions … we do believe this will help the week and the quarter for Strip operators.”

This year’s NFL draft in Nashville saw an enormous amount of visitors; the league said more than 600,000 attended over the three days.

Travel search company Hipmunk reported the median hotel booking price in Nashville during the 2019 draft was $304, 71 percent higher than equivalent dates in 2018.

Beynon said host cities can expect anywhere between 250,000 and 600,000 visitors during the draft. And with the 2020 draft only two weeks after Easter, Beynon said, Las Vegas can expect a large turnout.

Events drawing thousands of visitors to Las Vegas are nothing new for the Strip. This past New Year’s Eve, for example, drew a crowd of about 375,000 locals and visitors.

Last year, the most expensive days for hotels in Las Vegas were associated with CES and the Electric Daisy Carnival, two events that each drew in more than 135,000 people. The median price on Jan. 10, 2018 — the second day of CES — was $366, 207 percent higher than non-CES dates in January. On May 19, during last year’s EDC, it was $246, according to Hipmunk.

Vegas can, and usually does, “increase rates aggressively for events or seasonal events,” Soderlund said in her email.

The price shift during next year’s draft can be found on and off the Strip. According to a May 9 search on Booking.com, Excalibur is charging $279 for a room on April 23, compared to $35 just a week prior. The Mirage is jumping from $139 on April 16 to $499 during the draft. Even South Point — which sits eight miles from the Strip — has prices at $209 for April 23, a 165 percent jump from the previous week.

A subsequent search on Booking.com showed some rates had changed already.

Visitors can’t do much to avoid price jumps at hotels, but they do have more lodging options with the advent of Airbnb.

“The Airbnb community ensures fans and families can find affordable places to stay for the event,” Spanjian said via email. “With Airbnb listings located outside of typical hotel areas, this brings economic opportunity to neighborhood (businesses) that don’t typically benefit from visitor spending.”

Airbnb is anticipating a spike in bookings, but it doesn’t expect a large increase in rates, because the supply often increases with demand.