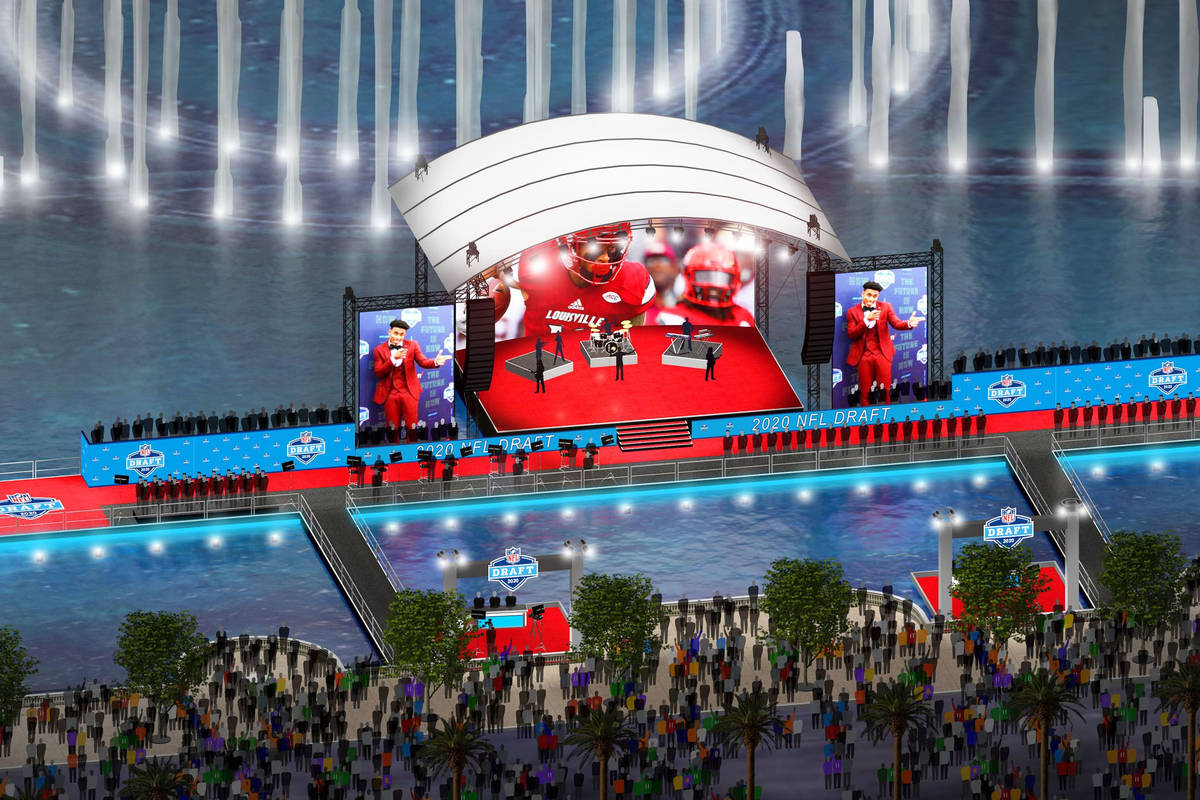 The NFL soon might circle back to Las Vegas as a site for its annual draft, perhaps as early as 2022. That’s what NFL vice president Peter O’Reilly told reporters Tuesday on a conference call.

If so, Raiders owner Mark Davis will embrace it with open arms.

“Absolutely,” Davis said. “At some point in time Las Vegas is going to be able to take advantage of being Las Vegas and what we have to offer here. So, we’d be beyond excited for that opportunity.”

After having the NFL move the 2020 draft from Las Vegas because of the coronavirus pandemic and replace it with a made-for-TV virtual draft April 23 to 25, a 2022 return would fill a gap in the current draft schedule. The draft is set for Cleveland in 2021 and Kansas City in 2023.

When asked on a conference call if Las Vegas is back in play, O’Reilly said 2022 “is an option for Las Vegas. We need some time to work through that with Las Vegas, with the Raiders and with the LVCVA out there. But that is something we are considering, for sure.”

He added: “We want to thank our tremendous partners in Las Vegas, the state of Nevada, the Las Vegas Raiders and all of our partners and fans who would have been part of an amazing public draft in Las Vegas. As we have said previously, we are focused with them now on identifying a future draft to do fully and properly in Las Vegas.”

Las Vegas is eager to work again with the NFL.

“We look forward to hearing more about the potential for Las Vegas to host the draft in 2022,” MGM Resorts International spokeswoman Jenn Michaels said. “The plans originally in place for Las Vegas this year were very exciting, and we don’t believe there’s another city that throws a party quite like we do.”

Added Las Vegas Convention and Visitors Authority spokeswoman Lori Nelson-Kraft: “Peter’s remarks about future consideration to host the draft in Las Vegas were very exciting to hear. We would be thrilled to welcome the NFL and all of their loyal fans to Las Vegas for an “Only Vegas” draft experience when the opportunity presents itself.”

Green Bay also has been mentioned as a possible host city in 2022.

The 2020 NFL draft was to be the first formal step by Las Vegas in an NFL relationship that is expected to include future Super Bowls and other big-time events. The Raiders are planning to open the 2020 season at Allegiant Stadium, the $1.9 billion stadium they are building in partnership with the state of Nevada.

And there were big plans in place, the centerpiece being the NFL’s newest stars being showcased on the Fountains of Bellagio before being whisked away to the Caesars Forum convention center to hear their names called. The red carpet stage was to be constructed over the fountains, with players and their families ferried by boat to and from the stage.

The draft’s main stage and the Draft Experience — a free, three-day football festival — was expected to be outside Caesars Forum.

“It’s just unfortunate how everything was lined up for this to be the kickoff to the inaugural season of the Raiders in Las Vegas, and it just made so much sense and we were all so excited about it,” Davis said. “Everyone from the governor down to the city managers and everyone else. And everyone put a lot of time and effort into making it an event that would be second to none, here in Las Vegas. We were all looking forward to it, and it was just going to be so exciting.”

Given the circumstances surrounding the pandemic, though, Davis supported the decision to move it.

“There was a disappointment, but as we said at the time, health and safety is always going to be No. 1,” Davis said.

The news that Las Vegas is back in play was welcomed with open arms across Las Vegas.

“We’d love to welcome the NFL and its legion of loyal fans back to Las Vegas for a future draft or Super Bowl,” said Virginia Valentine, president and CEO of the Nevada Resort Association. “We look forward to showing millions of people across the globe why we are the sports and entertainment capital of the world.”

Added Caesars spokesman Rich Broome: “The NFL had previously said the draft would be held in Las Vegas at some point, so it would be great news for the city if that can happen as early as 2022.”