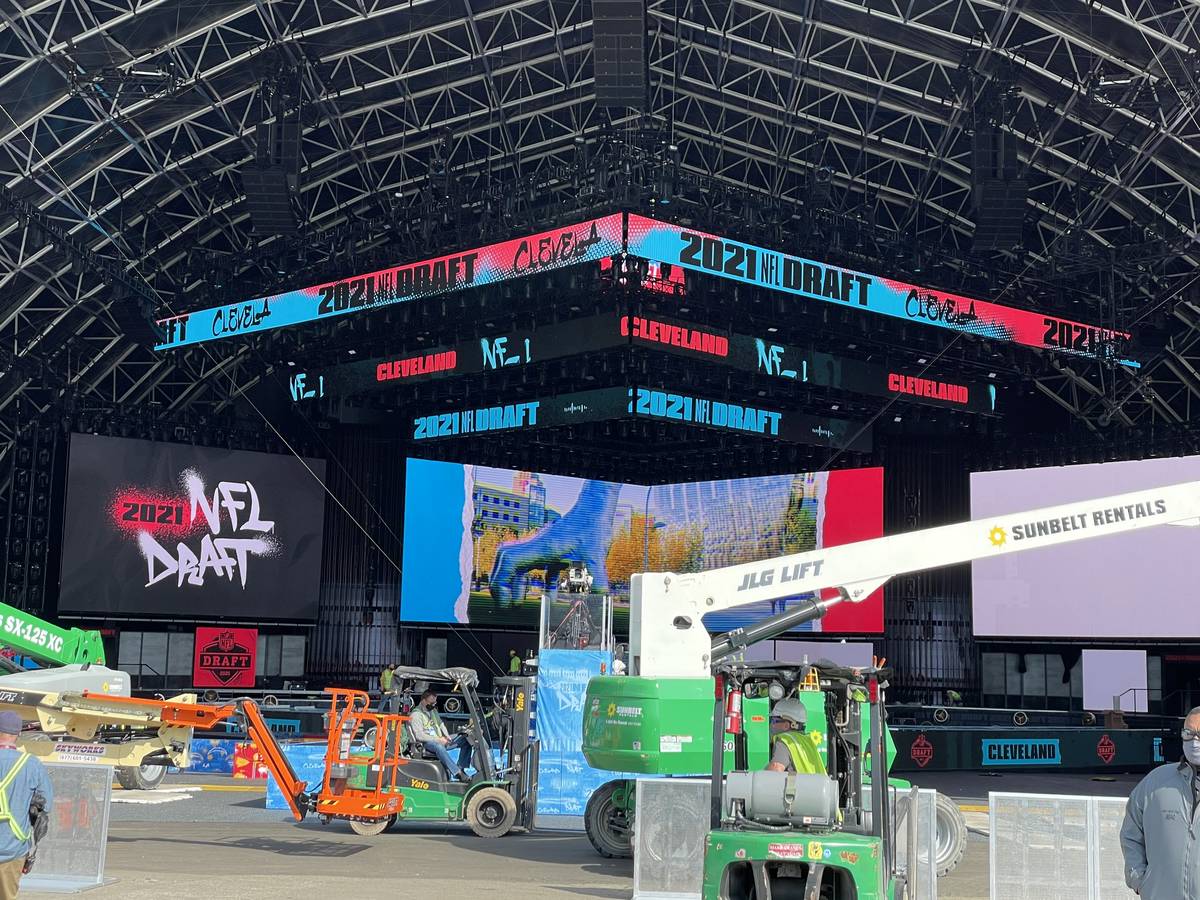 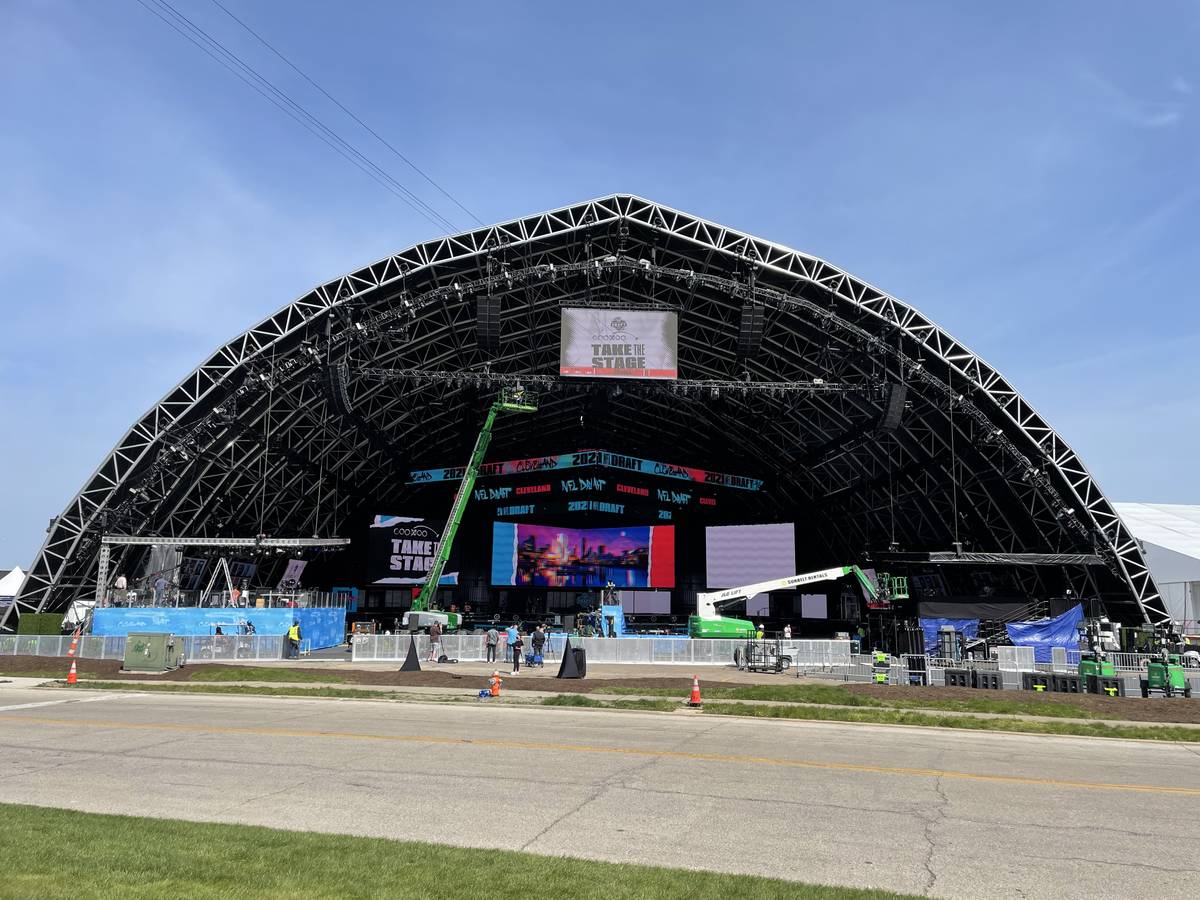 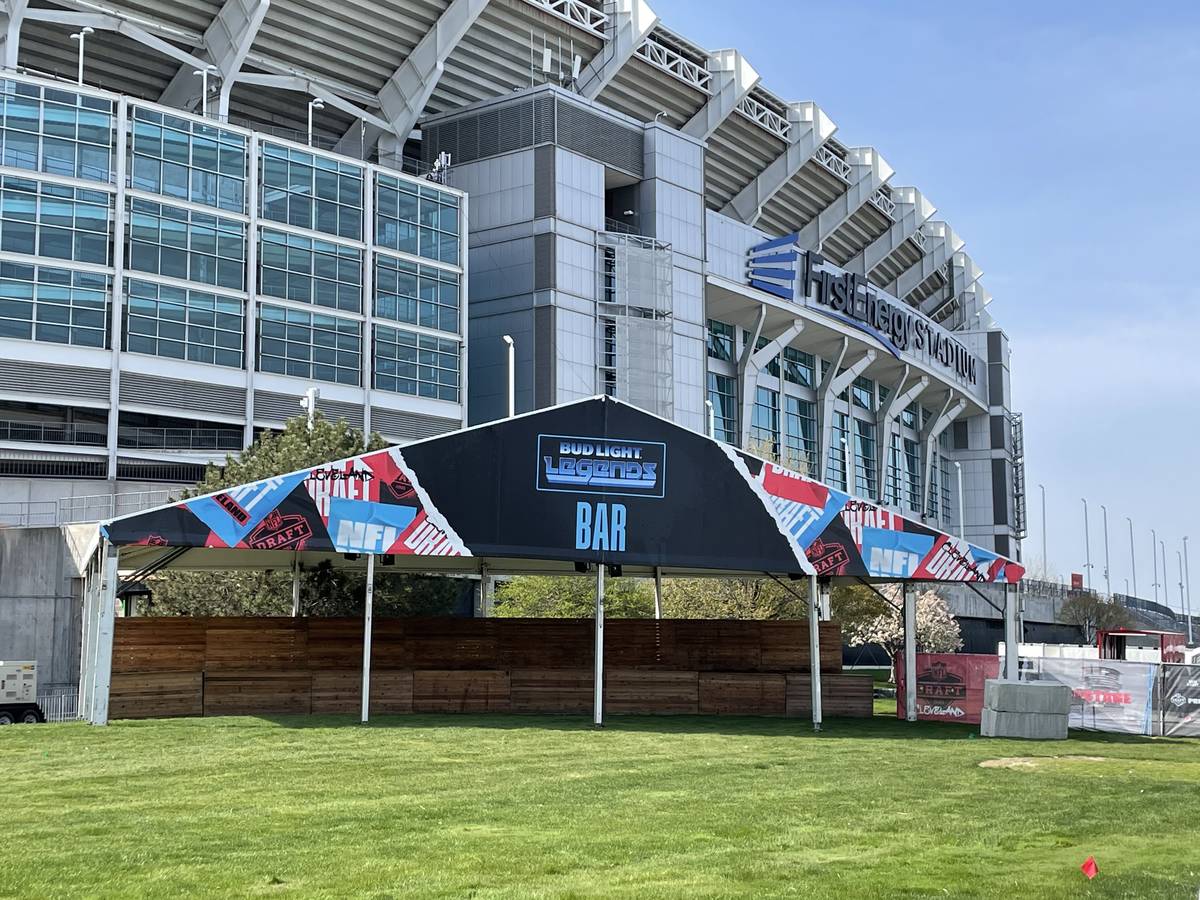 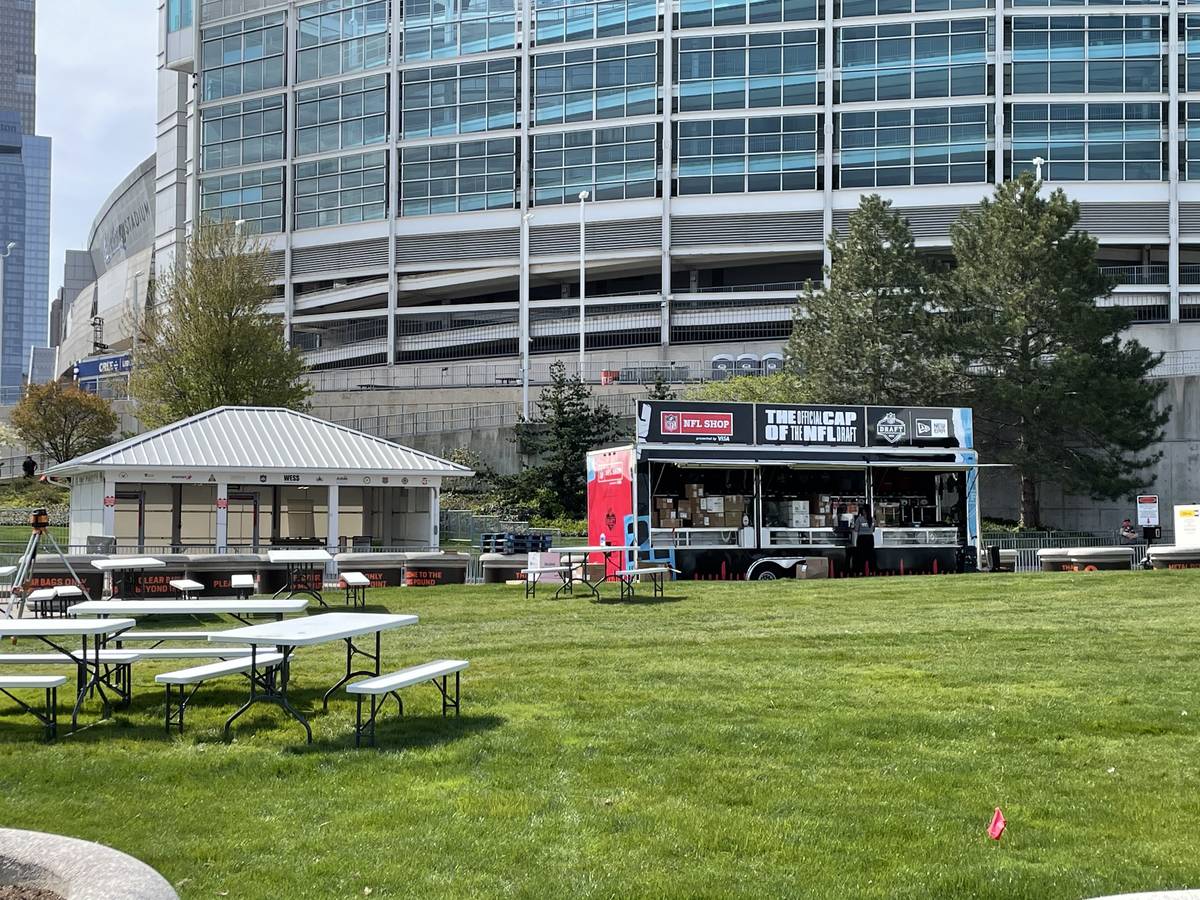 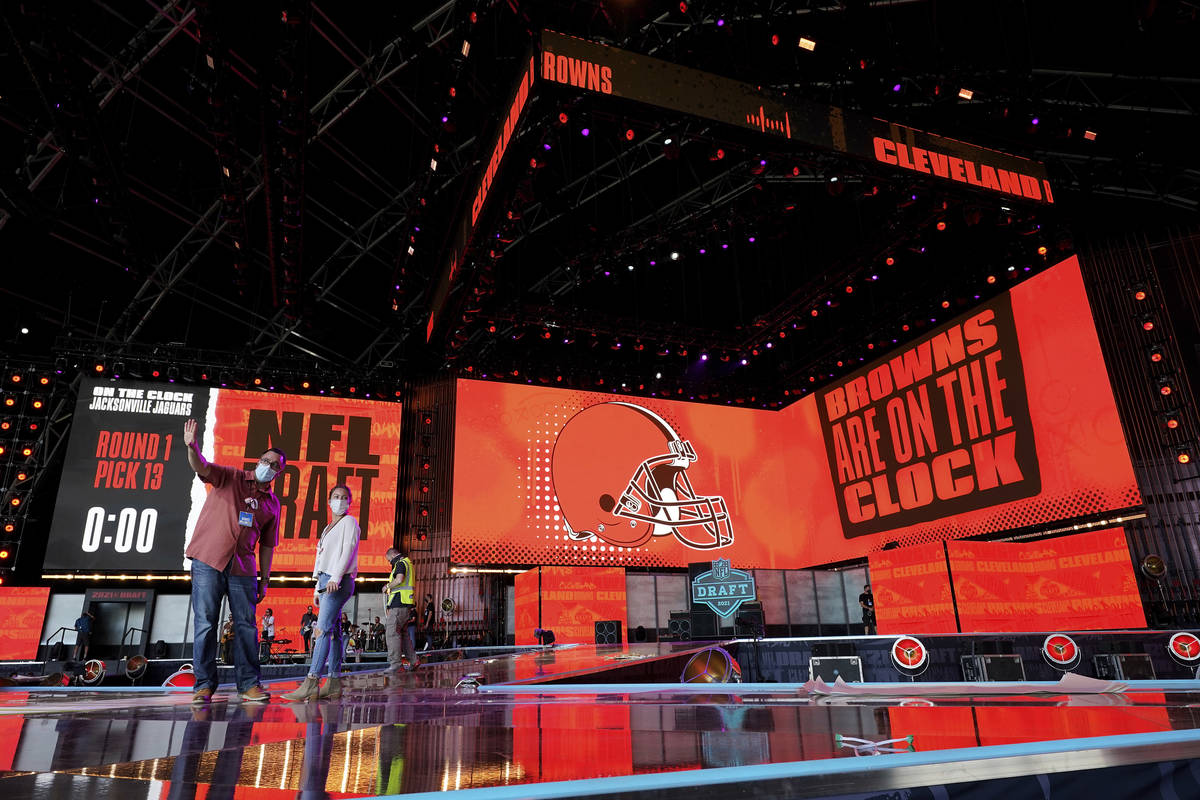 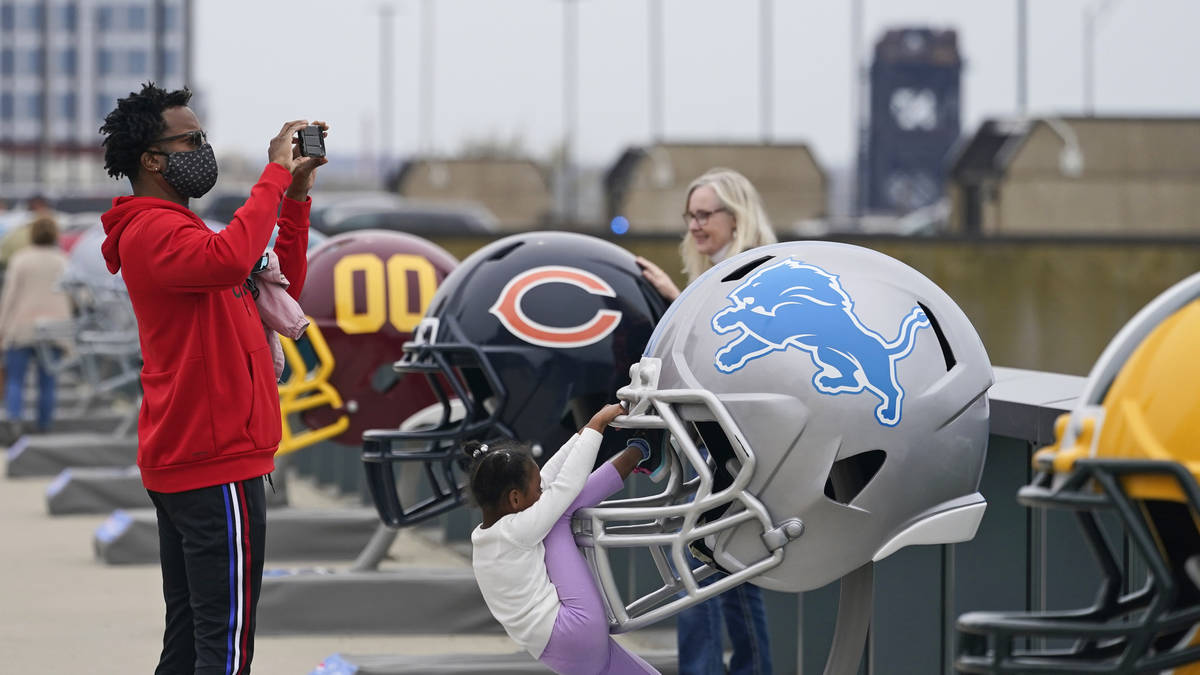 A man takes a picture where 32 teams' helmets are displayed, Saturday, April 24, 2021, in Cleveland, where the NFL Draft will be held April 29-May 1. (AP Photo/Tony Dejak) 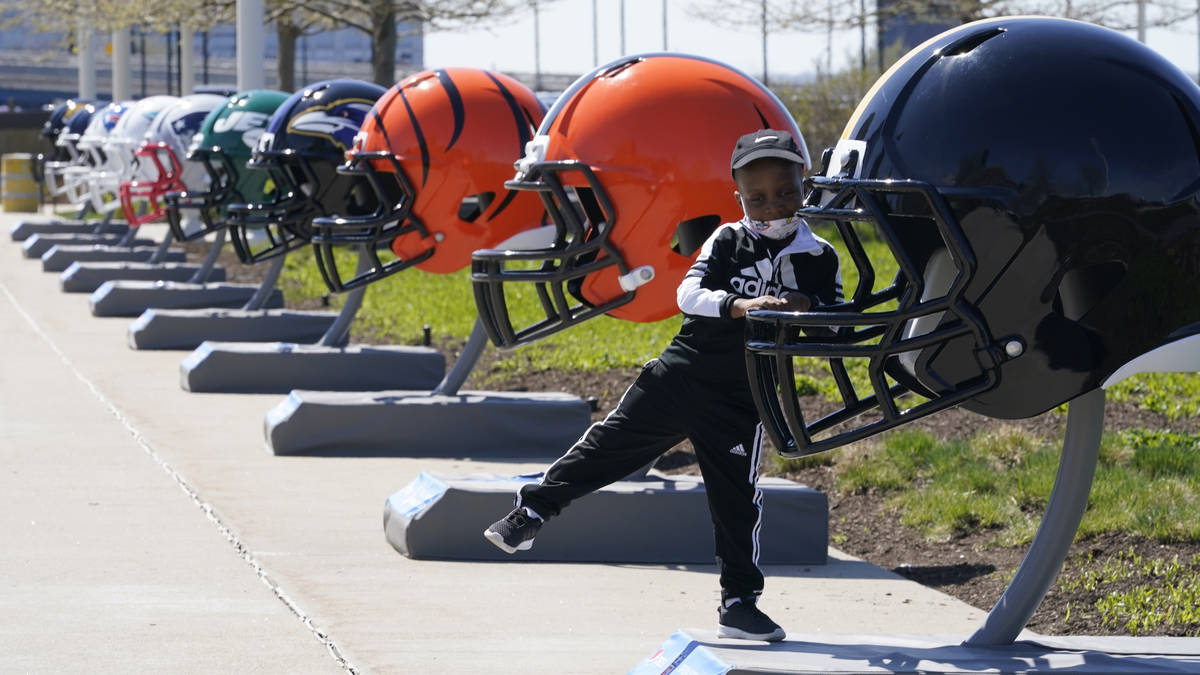 Joseph Toliver, 4, plays on one of the 32 NFL team helmets on display, Tuesday, April 13, 2021, in downtown Cleveland. Forced to cancel last year's NFL Draft in Las Vegas, the league is using lessons learned while plowing through an unprecedented, socially-distanced 2020 season and holding the Super Bow in Tampa, to have a draft that will look much more like normal — well, the new normal — with fans wearing their favorite team's colors and required masks.(AP Photo/Tony Dejak) 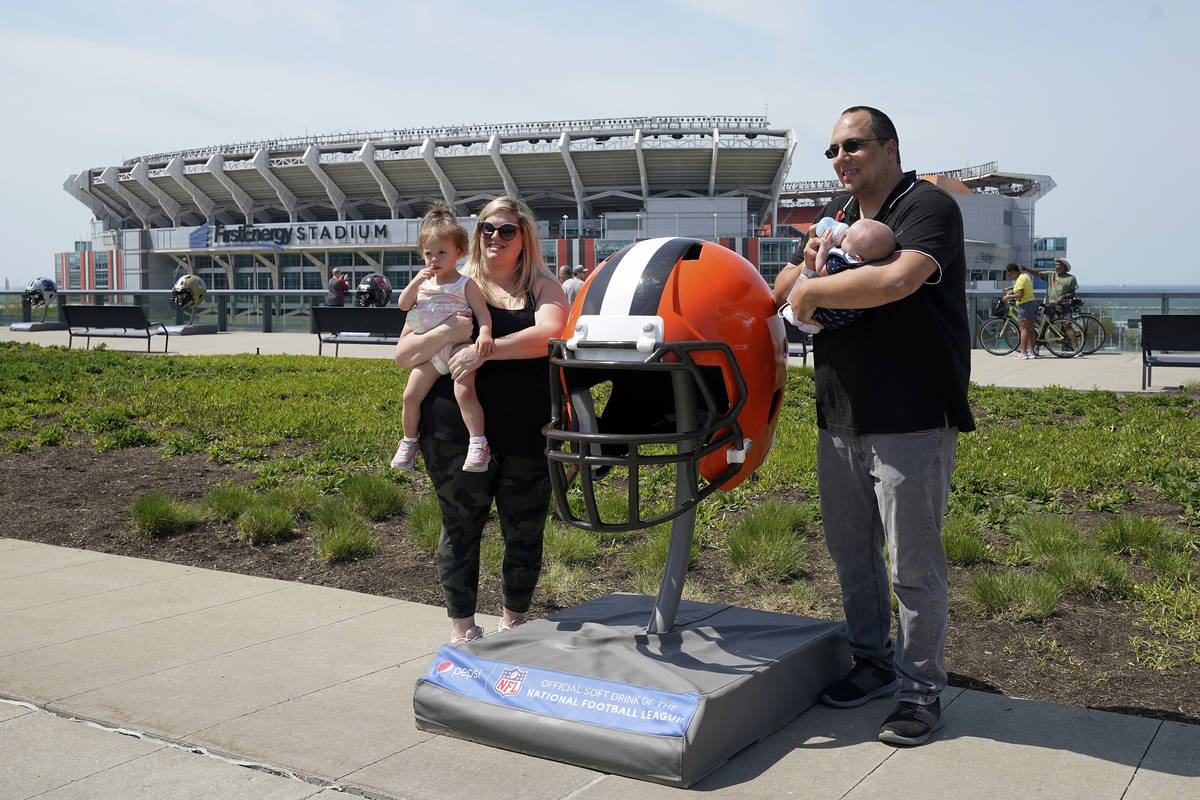 Fans pose for a photo with a large Cleveland Browns helmet, Tuesday, April 27, 2021, in Cleveland, where the NFL Draft will be held April 29-May 1. (AP Photo/Steve Luciano) 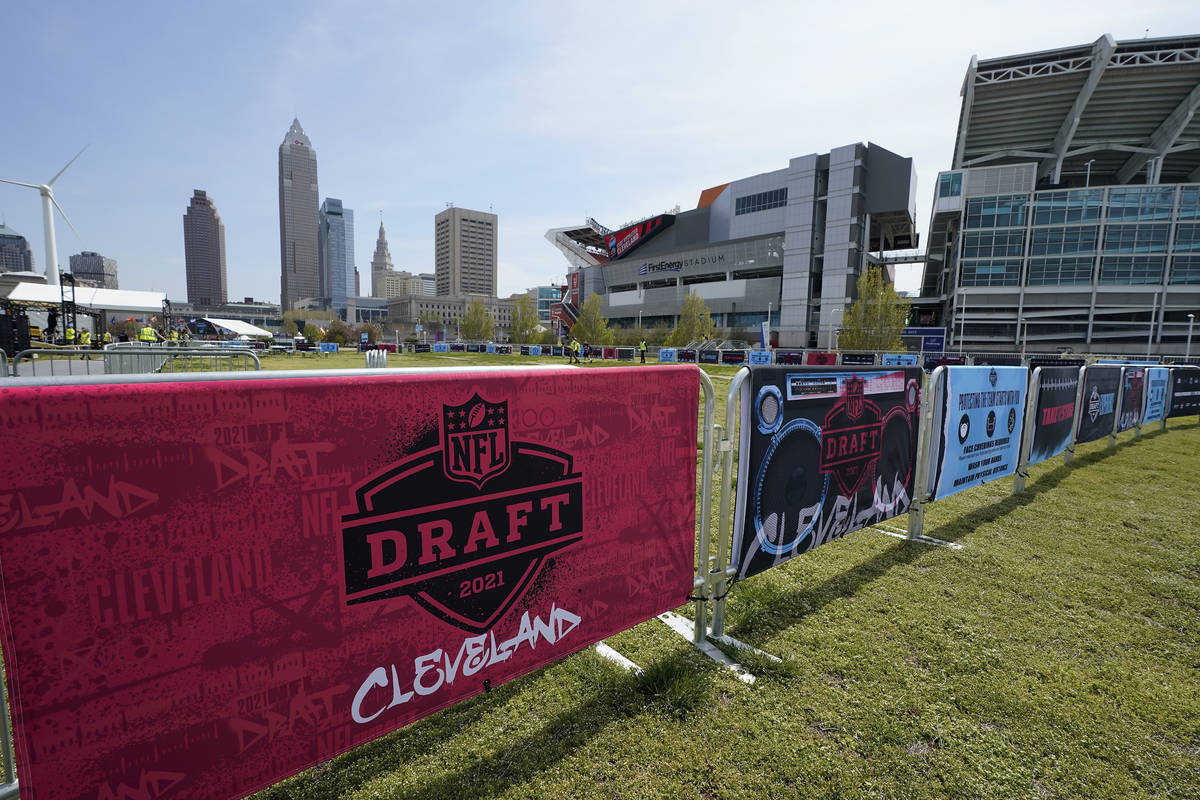 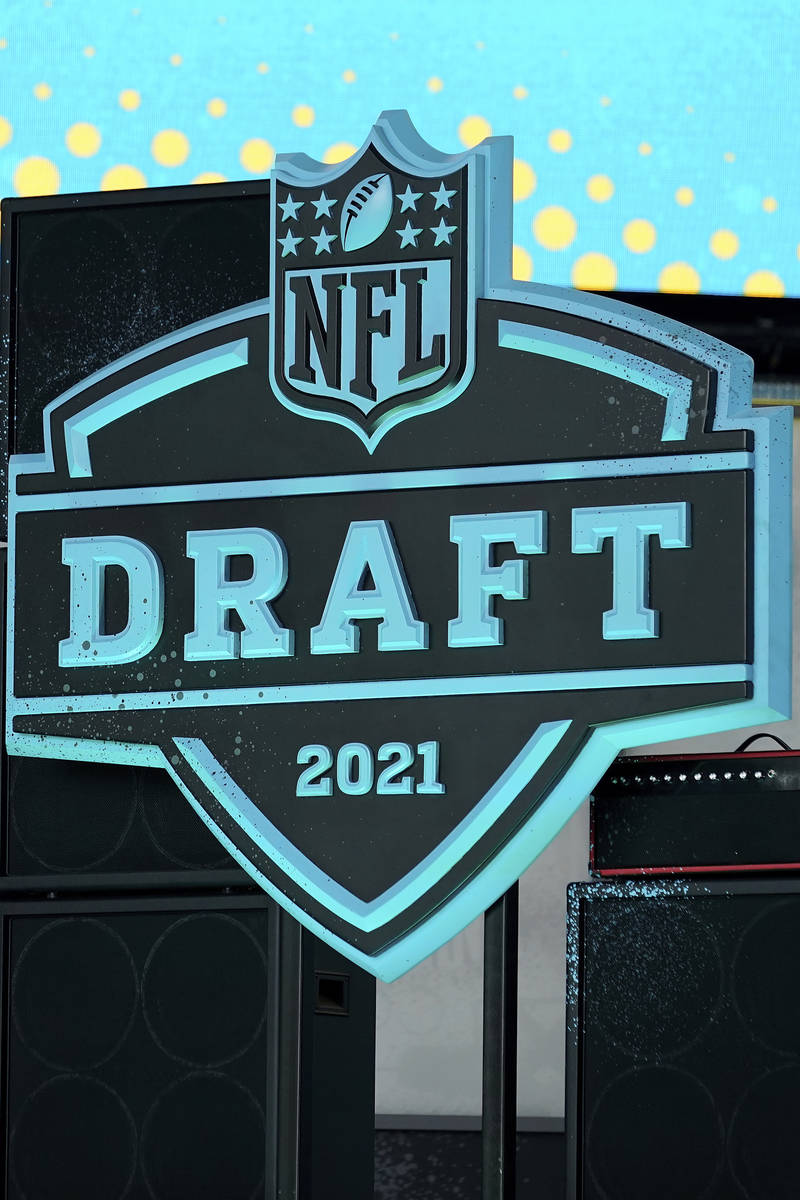 CLEVELAND — The stage structure sits on the edge of Lake Erie. Across from FirstEnergy Stadium, site of a 16-6 Raiders victory on Nov. 1 over the Cleveland Browns.

It isn’t yet finished, but when it is, it’ll be the focus of the most spacious theater in the history of the NFL draft. One fit for fans, the future stars of pro football and everything that comes with them.

“We’ve certainly come a long way from being in a hotel ballroom (like) when we started the draft back in Philadelphia in 1936,” said the league’s senior director of event planning, Eric Finkelstein. “It’s pretty amazing where we’ve come.”

The NFL unveiled its draft theater to a small gathering of media Tuesday morning, setting the stage for the rest of the week — and the beginning of the 2021 NFL draft.

The theater structure is 95 feet tall, 220 feet wide and 225 feet deep, according to Heather Nanberg, the league’s director of events. That’s nearly 32 yards tall, 74 yards wide and 75 yards deep for those who prefer standard football terminology. The theater is so large in part to safely accommodate players, agents, representatives from the league’s 32 teams and select fans amid the coronavirus pandemic.

Finkelstein and his team arrived in Cleveland on April 5 to begin constructing the theater. The league is working in conjunction with C3 Presents, an event production company based on Austin, Texas. He said he’s expecting up to 50,000 fans to attend draft festivities on Thursday, Friday and Saturday.

A select 4,000 to 5,000 fans will have access to what Finkelstein called “the vaccinated fan zone” that includes the sidewalk and grassy knoll near the draft theater and the theater itself. Those fans must be fully vaccinated from COVID-19 in order to access those exclusive areas.

That area will be standing room only. Masks are required for all spectators. The NFL is encouraging fans to get vaccinated. Commissioner Roger Goodell will be wearing a sticker on his suit Thursday promoting vaccinations and health.

The fan draft experience surrounds the stage. Different booths and activities will be available to spectators and fans. They won’t be unveiled to the media until Wednesday. Fans will have access Thursday through Saturday.

The draft picks themselves will still be made virtually, but Nanberg and Finkelstein are excited that some sense of normalcy in wake of the pandemic has returned. Especially after last year’s draft, which was supposed to be in Las Vegas and was moved to a completely virtual format.

“Last year’s draft was so unique … and there were some really cool moments where we got a lot closer to a lot of our prospects, some of our coaches and others who we got to see in their own homes,” said Nanberg, who said planning for this year’s draft began more than two years ago. “We are looking to pull a lot of those kind of positives that came out of that virtual draft into this year’s draft as well.”

The league has conducted the draft in a different market every year since 2015 in an effort to engage and showcase its respective communities. Community engagement initiatives are a prominent part of draft week. Nanberg said the focus is on raising money for the local organizations and communities impacted most by COVID-19.

“We have the opportunity to really be that light hopefully at the end of the tunnel. From an event planning perspective, it’s been great to be able to do the event as far as the size and scale,” Finkelstein said. “It’s a very exciting time. It’s certainly an evolving time, but we think that the draft will hopefully set the tone for a lot more events of this size and scale to come.”