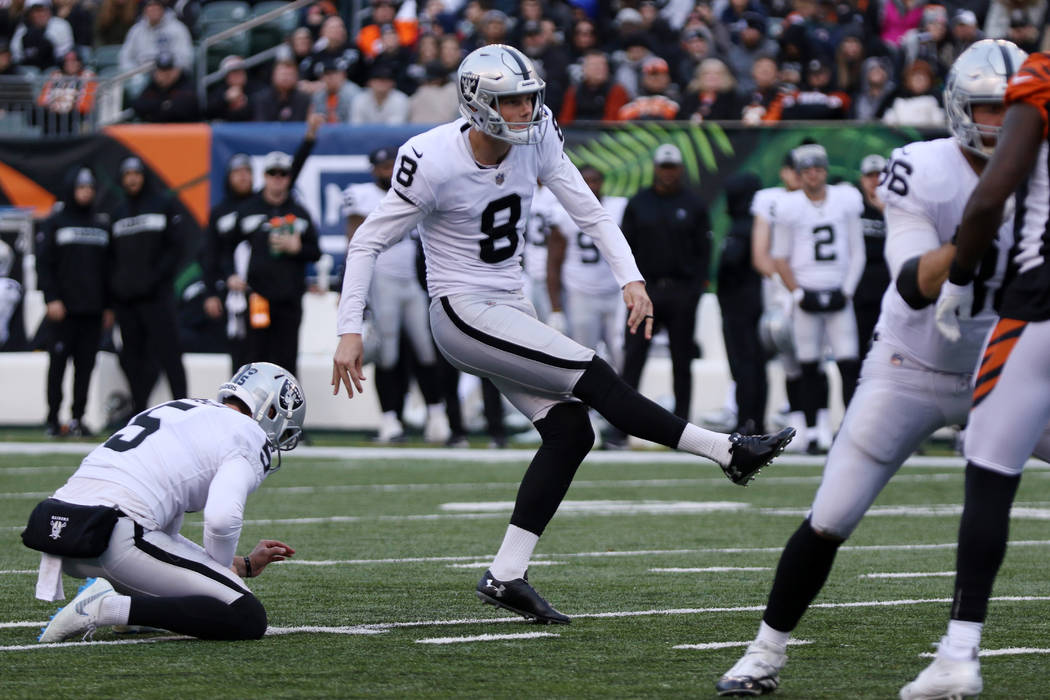 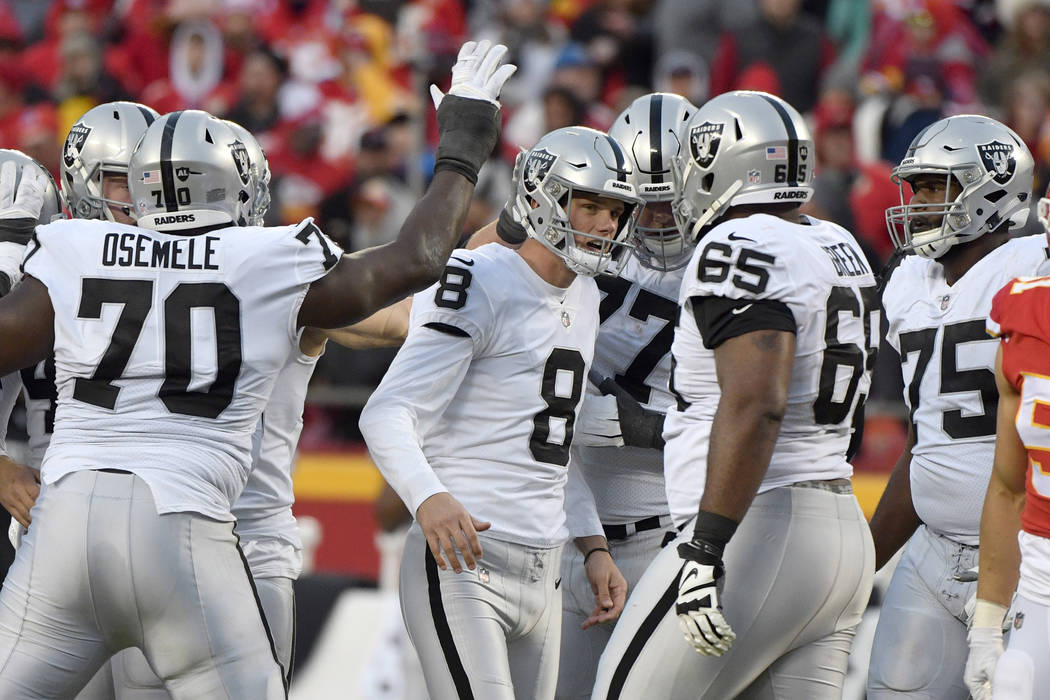 Oakland Raiders kicker Daniel Carlson (8) is congratulated by teammates after he kicked a field goal during the first half of an NFL football game against the Kansas City Chiefs in Kansas City, Mo., Sunday, Dec. 30, 2018. (AP Photo/Ed Zurga) 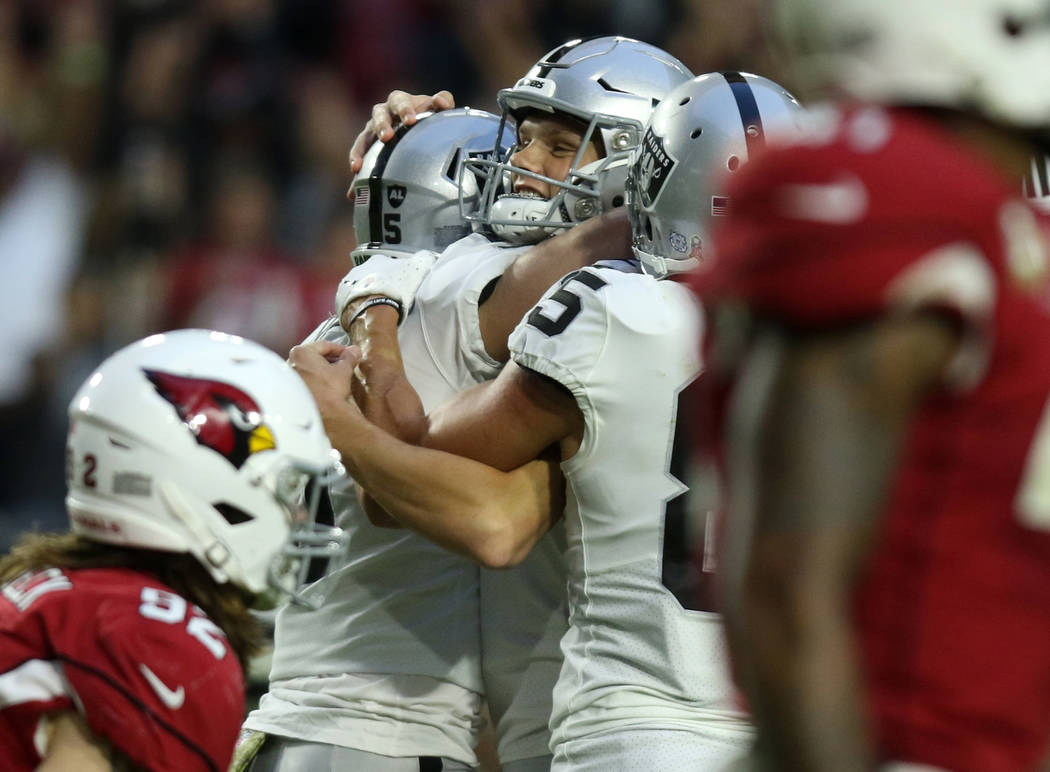 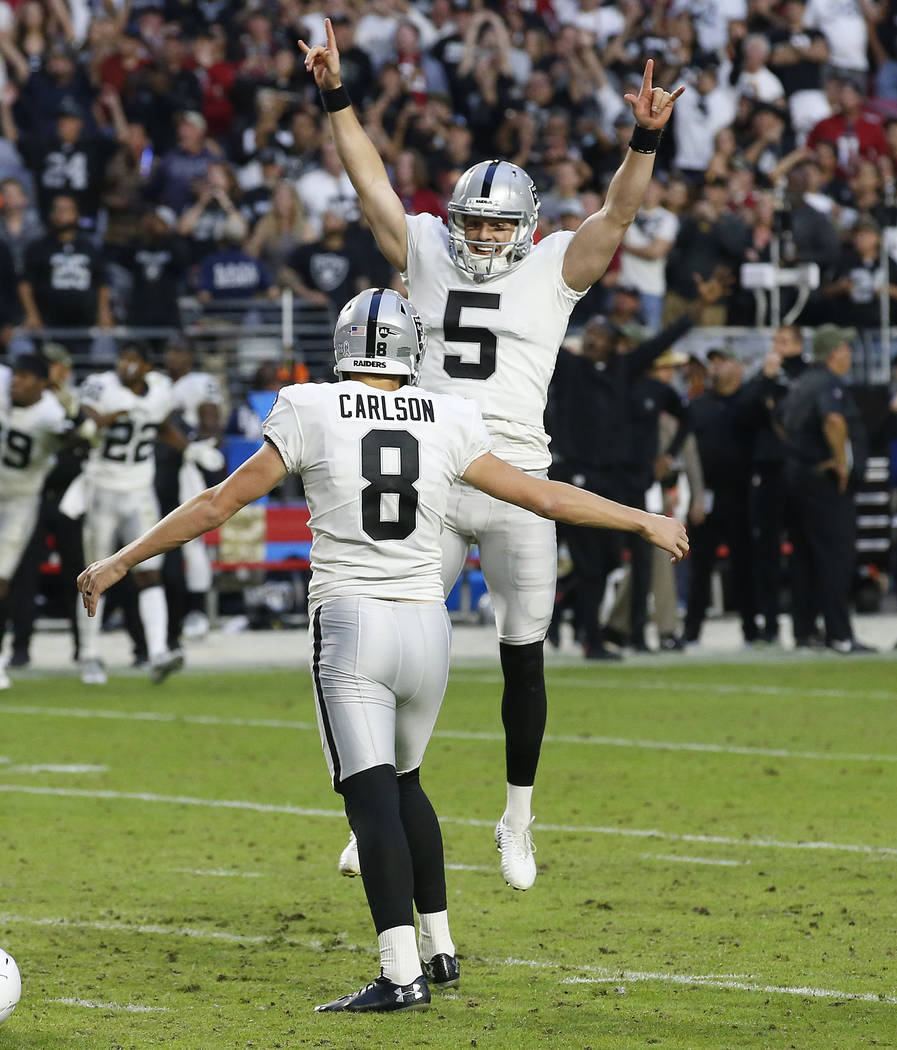 ALAMEDA, Calif. — Daniel Carlson was 17 when Auburn hired Rich Bisaccia as its assistant head coach on Jan. 3, 2013. Bisaccia quickly reached out to the Colorado teenager, a kicker and punter who orally committed to the Tigers months earlier, and solidified his decision to attend.

“I took a little skip from the NFL and went to Auburn for 22 days,” Bisaccia said this week. “Daniel was the only guy I got committed.”

Their second partnership is much more enduring. Carlson, coming off a historic rookie season, is entrenched as the franchise’s kicker in 2019. Meanwhile, little else at the specialist positions appears resolved. On Wednesday, Bisaccia called it a “competition” at the punter and long snapper jobs.

Johnny Townsend and rookie A.J. Cole are vying at punter.

Despite some struggles, Townsend is the favorite.

He joined the Raiders as a 2018 fifth-round pick from Florida. The Raiders selected him in large part for his directional punt ability, but he struggled with consistency. A 22-yard punt out of bounds against the Kansas City Chiefs in Week 13 was one of six Townsend punts to travel fewer than 30 yards. Overall, he ranked 30th in the NFL with a 38.3-yard net average.

“He’s really done a great job working on his hang time,” he said Wednesday. “That’s improved tremendously (over) the course of the year. Now, we’ve given up a little bit of direction to get his hang time where he’d like it to be, and hopefully we can get both — the hang and the direction — going into training camp.”

In 2018, the steadiest part of Townsend’s game was holding.

That contributed to Carlson converting 16 of 17 field goals, a franchise-record 94.1 percent rate. Ideally, the club would avoid upending an important component to its successful field-goal battery. Thus, Townsend is expected to have every opportunity to win the job this summer.

Cole, a former North Carolina State standout, looks to push. He went undrafted in April before signing in May after a successful tryout at the Raiders’ rookie minicamp.

At long snapper, Andrew DePaola is the clear favorite.

He signed a four-year contract in March 2018 but, on Sept. 10, during the first quarter of the season opener, he suffered a torn ACL for the second time in 21 months. The Raiders signed rookie long snapper Trent Sieg, who proceeded to fill in admirably.

While injured, DePaola remained a regular at team headquarters.

“I think it’s a huge testament to him,” Carlson said. “He was hurt. … He doesn’t necessarily have to be around. But he was here every day rehabbing, working on his own craft, getting better, getting healthy to where he’s at today. Also, we had three rookie specialists, which I think is pretty rare. I don’t know how many teams have ever done that.

“But for him to be a resource to Trent, to us even — if we had any questions, we’d always ask him because he’s been through it a little more than we have. It was just huge for us last season to have that resource. It’s good to have him back and healthy and competing now again.”

Carlson is an exception.