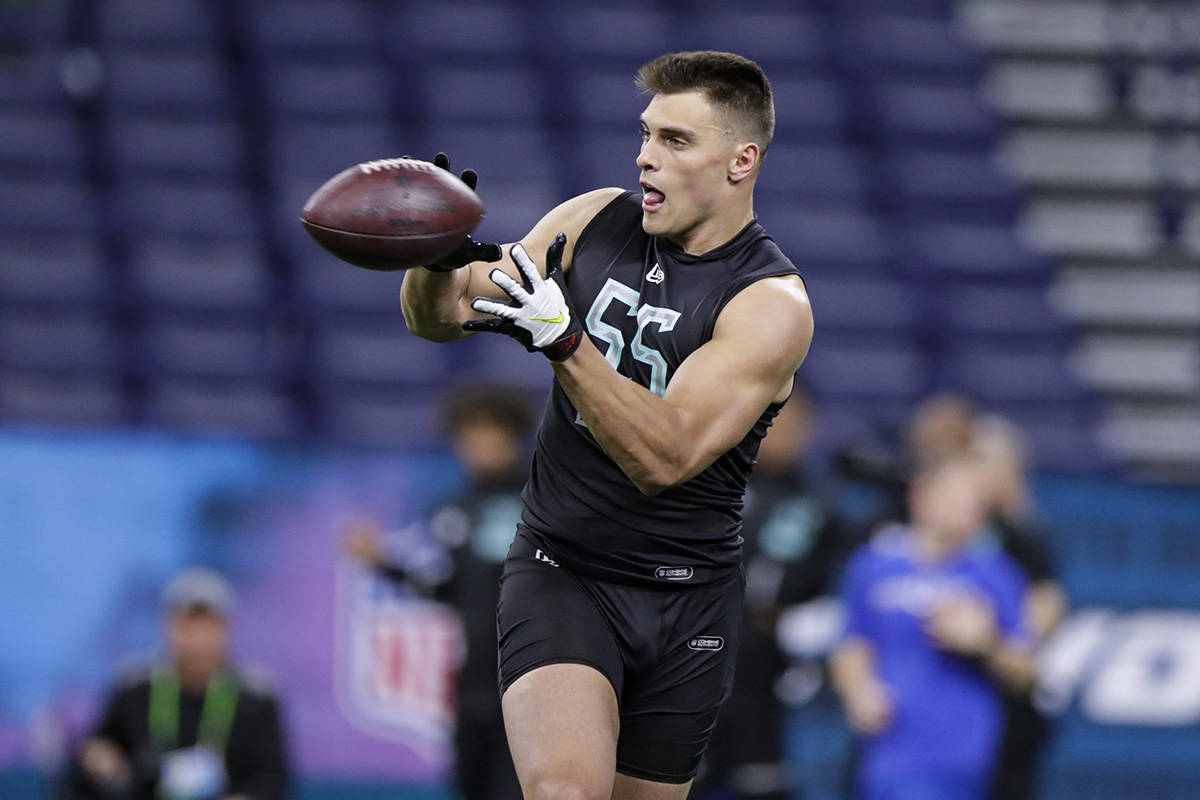 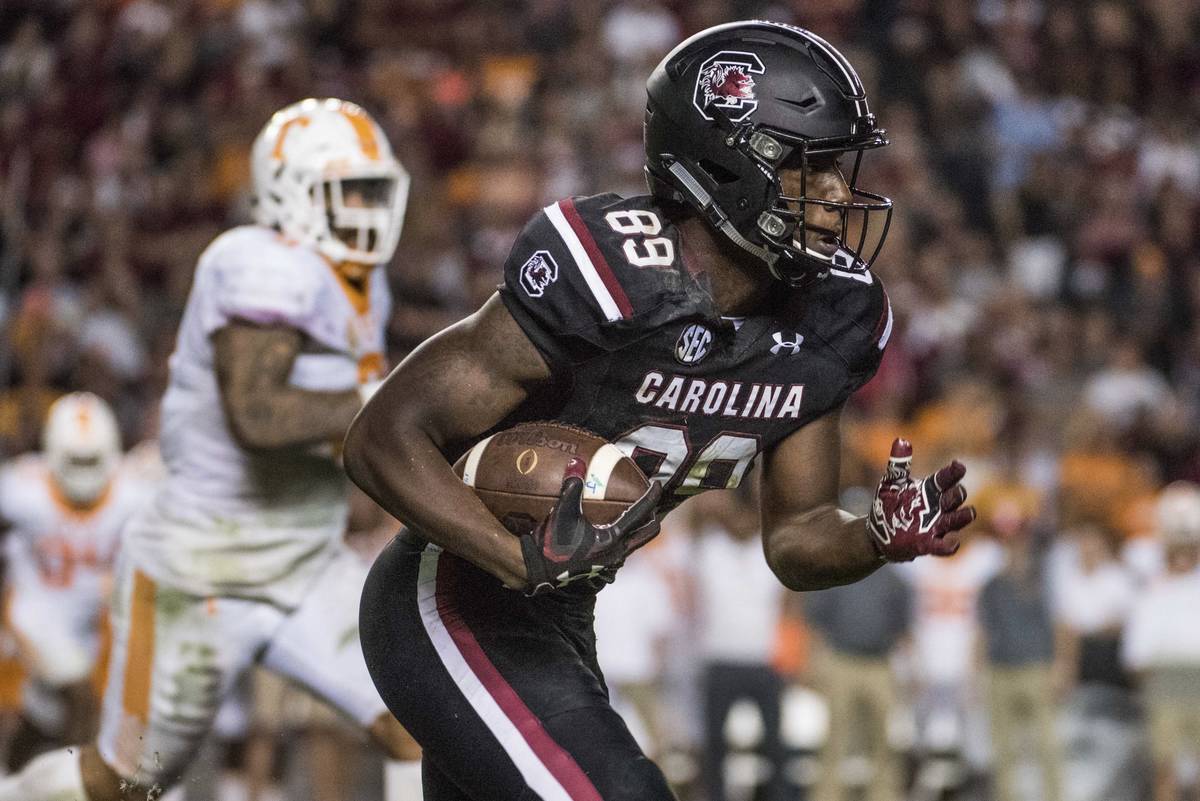 It is almost inevitable that at Raiders training camp at the end of the month a relative unknown player or two will make themselves known. The trick is figuring out who those players will be.

Tight end Darren Waller, who essentially came out of nowhere to be the big hit of Raiders camp last year, comes to mind. To a lesser degree, rookie punter A.J. Cole made an impact. He caught the Raiders’ eye during a rookie minicamp tryout, then won the starting job with an impressive training camp. Cole went on to average 46.0 yards on his 67 punts.

Given the lack of in-person workouts this off-season, the potentially reduced training camp roster from 90 to 80 players and what will certainly be a far different looking setup due to COVID-19 concerns, undrafted free agents like Cole will have a much harder time making their mark and earning a job.

But that doesn’t mean there won’t be a few, whether drafted or free agents, who make that leap.

Here are four to keep an eye on:

The Raiders selected the former Clemson safety in the third round of the 2020 draft. At the time, the general consensus was that Muse would contribute mostly on special teams while easing into the transition to linebacker. But don’t be surprised if Muse alters the assumed timeline with a big performance in training camp that earns him more playing time at linebacker than originally projected.

While Muse played safety at Clemson, the Tigers’ defensive scheme gave him plenty of linebacker-type responsibilities, especially in run defense. Among third-level defenders, he was Clemson’s primary run defender. As a result, the shift to linebacker should not be too difficult.

Combine his run-stopping ability with the 4.39 40-yard dash he ran at the NFL scouting combine and his pass coverage skills from his time at safety, and it’s easy to see Muse standing out in camp as a versatile linebacker. In fact, don’t be shocked if he wins a starting job sooner rather than later alongside newcomers Cory Littleton and Nick Kwiatkoski.

Drafted in the fourth round out of Houston in 2019, the former college wide receiver was considered a bit of a project given the limited time he spent at cornerback in college. On the other hand, between his size — he’s 6-foot-2 — and athletic ability, whatever wait there might have been to get him settled in at the next level seemed worth it.

Unfortunately, Johnson was dealt a setback when he suffered a contusion and nasty face injury during the Raiders’ first preseason game. It meant a long stint on the injured reserve list and cost him valuable development time. To make matters worse, when he did come back he was the victim of a nagging back injury that limited his playing time and ultimately required minor off-season surgery.

Johnson has been completely healthy throughout the off-season and vows to return with a vengeance in his second year. And in spite of the Raiders investing draft picks in cornerbacks Damon Arnette and Amik Robertson and signing veteran corner Prince Amukamara, the Raiders still have high hopes for Johnson.

He’ll get a big chance to open eyes in camp.S o don’t be surprised if it comes together for Johnson this season.

The Raiders made a flurry of moves in free agency while addressing major needs on defense, and one move that fell under the radar was the pickup of Collins, the former Dallas Cowboys defensive tackle and a favorite of new Raiders defensive line coach Rod Marinelli.

Collins has shown a knack for pushing the pocket from the interior. If he can replicate that with the Raiders, he will fill a major need. Last season Collins finished with 36 hurries, 10 QB hits and 48 pressures, each of which would have led the Raiders’ interior linemen.

Looking beyond the obvious stats, Collins has a chance to not only make an individual impact, but the complementary component he brings is bound to help his defensive teammates.

Ideally, the Raiders can create more one-on-one matchups for him in 2020. But even if he’s facing constant double-teams, it means more favorable matchups for his teammates.

Keep an eye on the 24-year-old Collins, who has a chance to develop into a Pro Bowl-caliber player.

The Raiders double-downed at wide receiver in the 2020 draft by selecting Alabama speedster Henry Ruggs with the 12th overall pick and then adding Edwards, a big, playmaking target out of South Carolina in the third round.

In a normal year, the 6-foot-3, 215-pound Edwards would have gone much higher in the draft. But a deep wide receiver class coupled with two injuries Edwards suffered toward the end of the 2019 season and just before the NFL scouting combine resulted in a bit of a fall.

That fall meant a first- or second-round talent falling to the Raiders in the third round. And while Edwards gets lost in the shuffle somewhat given all the hype for Ruggs, it would be a mistake to sleep on the physical, big-bodied wide receiver who can create space for himself downfield and whose physical stature and catch radius make him an ideal Red Zone weapon.

Edwards is primed for a big training camp, and his skill set is perfectly suited for a quick assent to the NFL game.