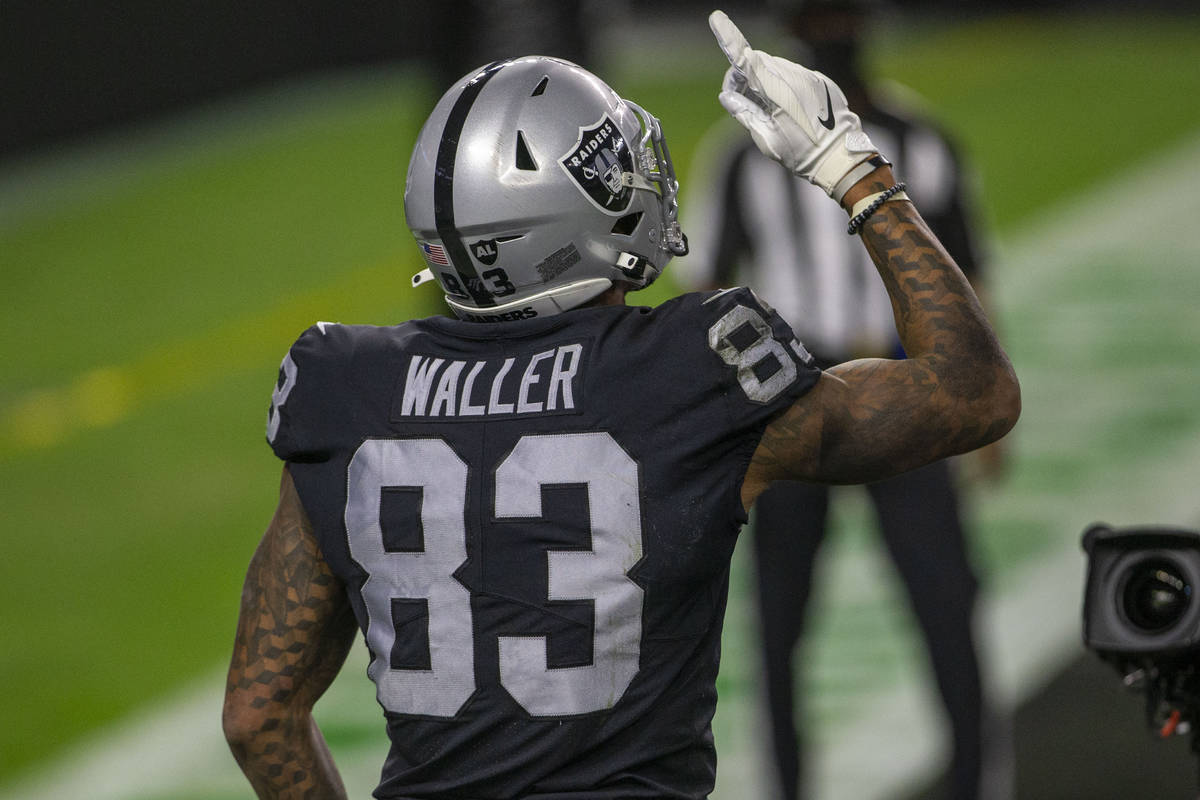 Raiders tight end Darren Waller (83), raises one finger to the sky after scoring a touchdown during the second quarter of an NFL football game against the Los Angeles Chargers on Thursday, Dec. 17, 2020, at Allegiant Stadium in Las Vegas. (Heidi Fang/Las Vegas Review-Journal) @Heidi Fang

But one has a chance to do so against the Broncos on Sunday. One that Gruden, the Raiders’ coach, says is “one of the best players I’ve ever seen play football.” The one being tight end Darren Waller, who seemingly gets better every year.

“I just try to stay in the present moment and just continue to improve,” Waller said. “I don’t try to think I know everything because I put up some decent numbers.”

Waller is ready to put the finishing touches on one of the greatest individual seasons in franchise history, needing only seven catches Sunday to establish a franchise record. The 28-year-old on Saturday set a franchise record for receptions in a season by a tight end, eclipsing Todd Christensen’s long-standing mark of 95.

He leads the team with 98 receptions, 1,079 receiving yards and eight touchdowns. Gruden said this week that he sees similarities to Brown, who played 16 years for the Raiders and holds franchise records in games played (240), receptions (1,070) and receiving yards (14,734), among others.

“He’s got the Tim Brown Hall of Fame, All-Pro work ethic, concentration, focus, desire, and he has the right attitude every single day,” Gruden said. “He’s a premier competitor in the walkthroughs, in the meetings and on the field, and that’s why he’s standing where he is today as one of the best.”

Waller has saved his best for last this season, exceeding 100 yards in three of his past four games, including a 200-yard output Dec. 6 against the New York Jets and a 150-yard showing Dec. 17 against the Chargers. He’s amassed 537 yards the past four games, second to only Jimmy Graham for the most by a tight end in a four-game span.

Graham, then with the New Orleans Saints, had 548 yards during a stretch in 2013.

At 6 feet 6 inches and 255 pounds, Waller is too big for defensive backs and too fast for linebackers. He’s skillful enough to outmaneuver both to make contested catches. Productive enough to cement his legacy in Raider lore.

He said he met Brown during a game against the Jacksonville Jaguars last year and is thrilled to be mentioned among Raiders greats.

“To even be mentioned with his name is pretty crazy,” Waller said. “I remember watching him when I was super young … To even be in that conversation is amazing.”

Interim defensive coordinator Rod Marinelli would not say Thursday whether he was interested in permanently retaining the position. The former defensive line coach said, “I let just things go as they go.”

“That’s been always me,” Marinelli said. “I love being with these guys. I love seeing them grow. I’ll just leave it that.”