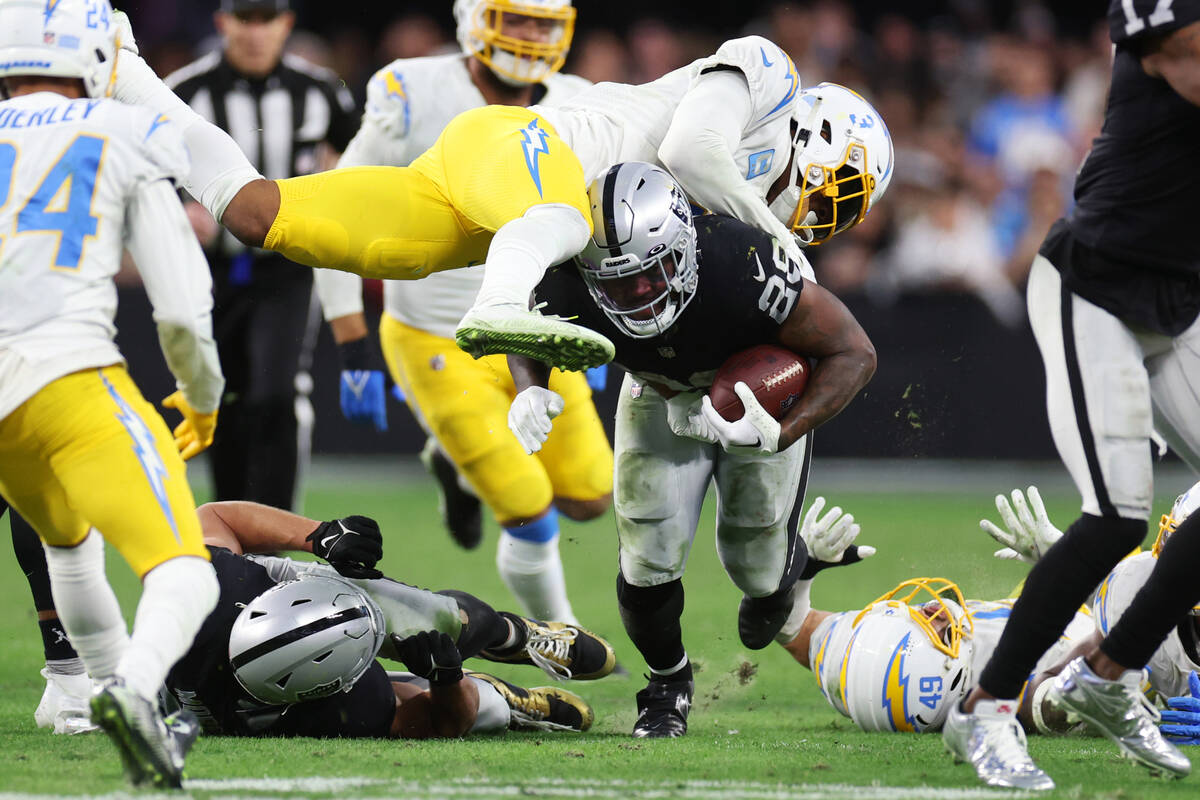 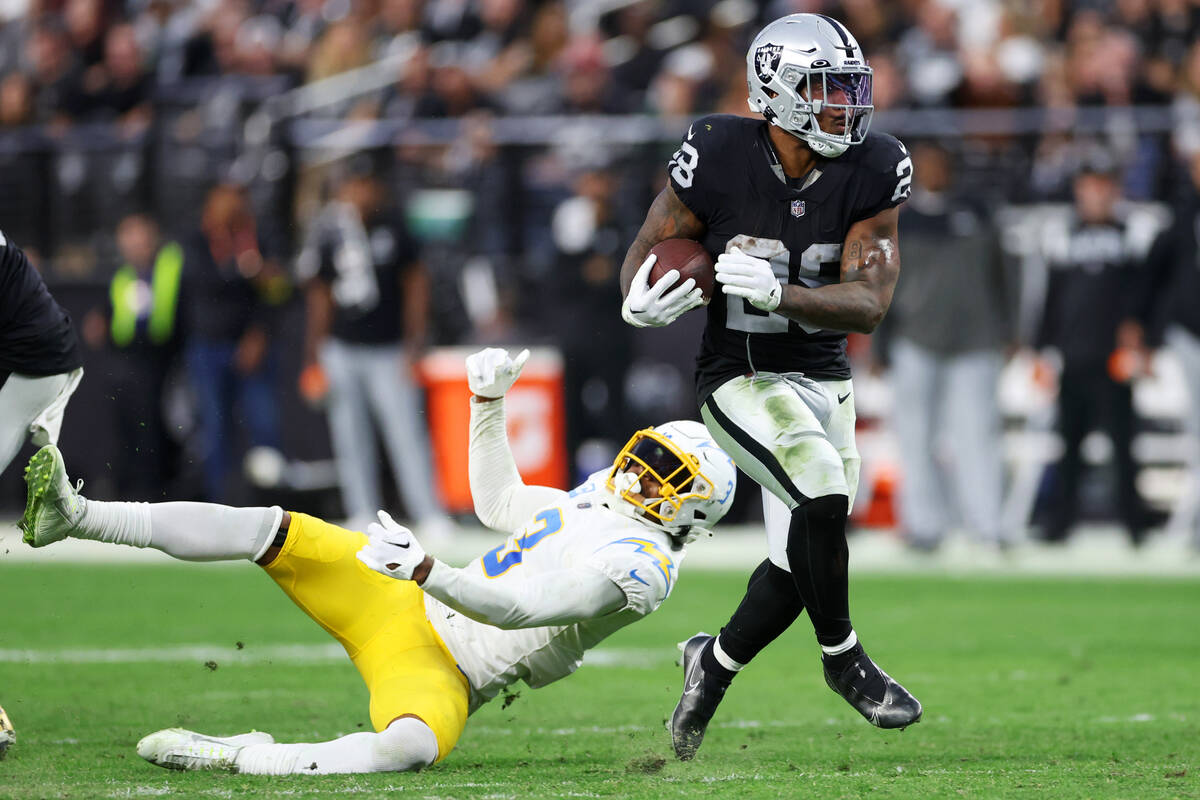 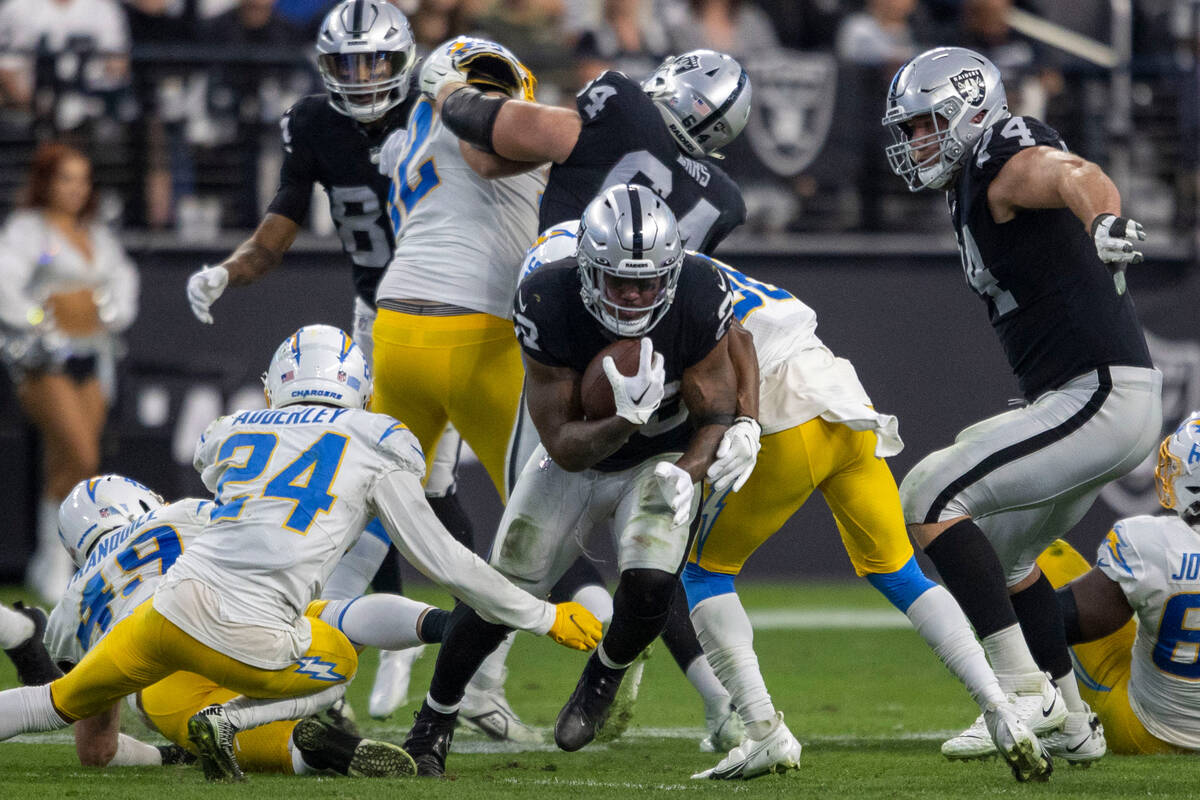 Raiders running back Josh Jacobs (28) pushes Los Angeles Chargers defenders through for more yards during the second half of an NFL game at Allegiant Stadium on Sunday, Dec. 4, 2022, in Las Vegas. (Heidi Fang/Las Vegas Review-Journal) @HeidiFang 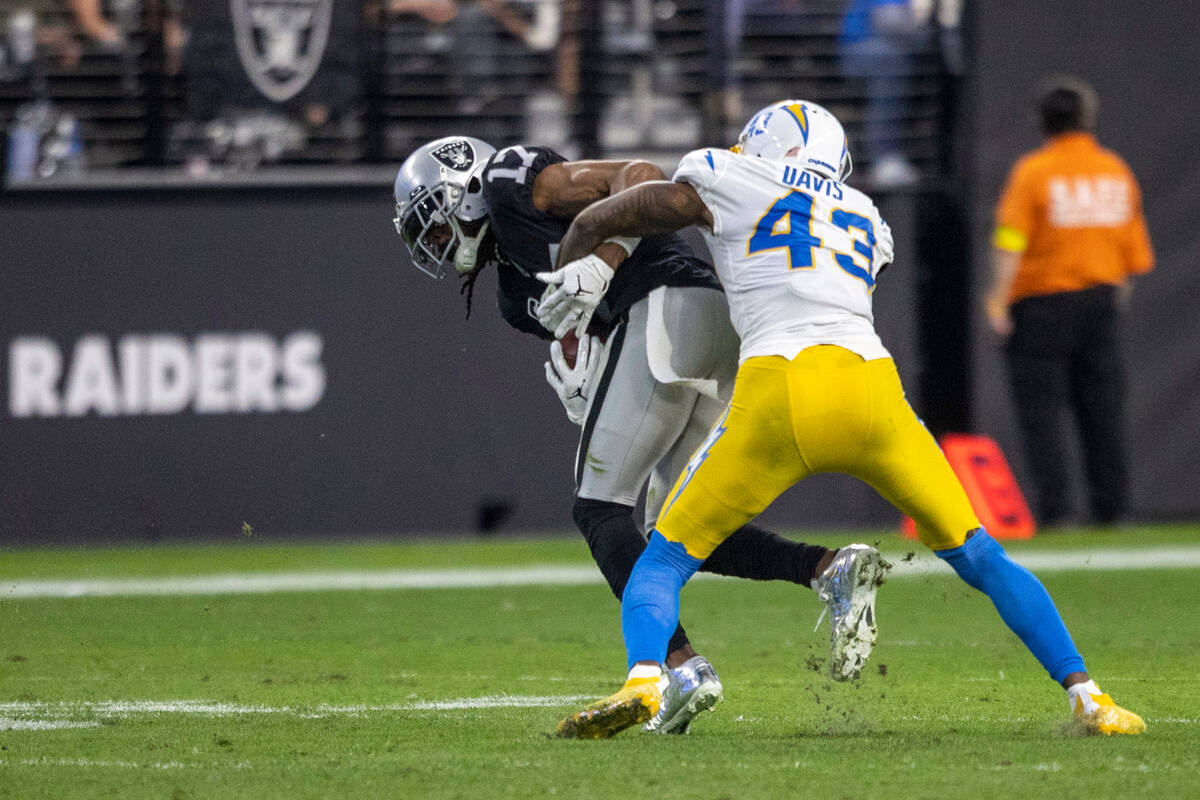 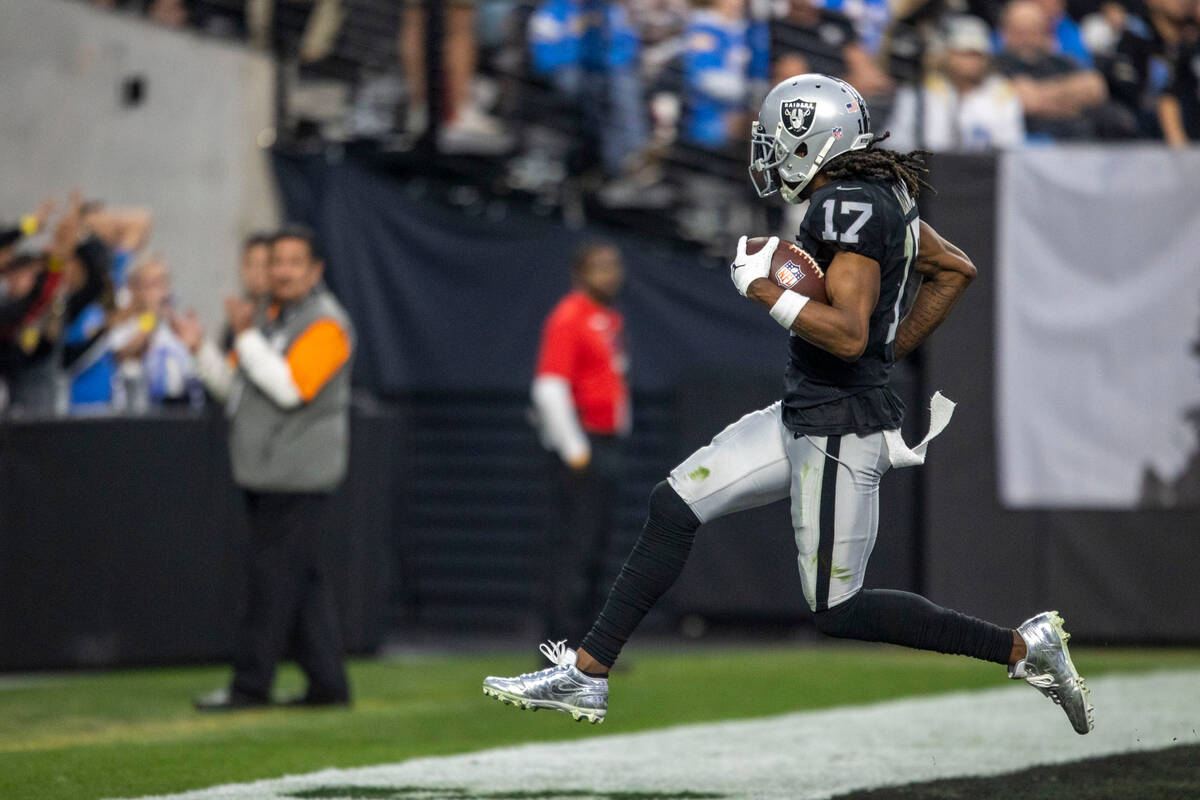 It’s not the statistical production that motivates Davante Adams. It’s what the statistics signify that inspires the perennial All-Pro wide receiver.

“In the sense that I’m holding up my end of the bargain and doing what I’ve got to do,” said Adams, who has 79 receptions, 1,176 receiving yards and 12 touchdowns in his first season with the Raiders.

“We’ve got to make sure we’re being as efficient as possible and let the stats and all of that take care of themselves down the road. Ultimately, I want to get the ball so I can put the team in position to win games.”

Adams did exactly that Sunday against the rival Chargers, catching eight passes for a season-high 177 yards and two second-half scores that propelled the Raiders to a 27-20 victory at Allegiant Stadium.

With five games to play, the 29-year-old is on pace to establish franchise single-season records in receptions, receiving yards and touchdowns.

Adams is to the passing offense what running back Josh Jacobs is to the rushing offense. He ran for 144 yards and a touchdown to bolster his NFL-leading total to 1,303 yards. He also is poised to eclipse franchise single-season records in rushing yards and yards from scrimmage.

“Whenever you talk about those two guys, whenever you call something that they have a good chance of touching the football, you feel pretty good about it,” coach Josh McDaniels said. “They’re the reason for that. They come through over and over and over again in critical situations.”

Let’s start with Adams, who dominated Chargers defensive backs so thoroughly that they were forced to give him 10 to 15 yards of cushion before snaps. That because he went deep twice for touchdowns in the third quarter, the first covering 31 yards via a stupefying stop-and-go and the second covering 45 on a good, old-fashioned flea-flicker.

In four games this season, Adams has topped the 100-yard mark and caught two touchdowns. No other receiver in the NFL has more than two such outings.

“We’re starting to understand some of these defenses and what they’re trying to do to stop us,” said Adams, who has topped 100 yards in all five divisional games. “Getting out there and a little bit of experience and more game time together, that usually leads to positive things.”

The flea-flicker was effective in part because Jacobs ran again so effectively. He followed fullback Jakob Johnson through an open hole for a 20-yard touchdown midway through the second quarter. The rest of his yards required punishing runs through defenders that would fatigue the Chargers in the second half — and bloody his shins by game’s end.

Jacobs said he didn’t feel the cuts during the game, adding that he was a “little sore.” But soreness is the occasional price of the greatness that Jacobs and Adams submitted Sunday.

“Josh made a lot of hard yards today,” McDaniels said. “It wasn’t like there were gaping holes that he ran through and wasn’t touched. He really fought his way through the line of scrimmage and kept his legs going. Tae, what do you say? He just keeps doing it over and over again. … Two really, really gifted football players.”